“There was no way I wanted to believe that what I was looking at was accurate,” recalled Andy Kraft as he plugged numbers into his tax-prep software.

When we left you on Friday before the long weekend… there was a media stir over IRS numbers that revealed so far this tax season, the agency has issued fewer refunds. And the refunds are for lower amounts than a year ago.

Four days later, the media drumbeat isn’t letting up. Drudge has two links on the topic this morning: The Hill tackles the political angle with “Smaller Tax Refunds Put GOP on Defensive,” while The Associated Press expands on the IRS figures with “I Owe How Much? Americans Shocked by Impact of New Tax Law.”

The Tax Policy Center estimates only about 6% of filers have a higher tax liability under the new law… while 65% are getting a tax cut and the rest will break even.

But between the way the GOP wrote the law and the way the IRS structured its withholding guidelines for employers… it seems many people expecting refunds are owing money instead.

Which brings us back to Andy Kraft, who lives with his wife Amy Elias in Portland, Oregon. “The couple had grown comfortable getting a small refund each year, a few hundred dollars or more,” reports the AP. “Then they found out they owe $10,160 this year.”

Your editor is trying to be sympathetic to the couple’s plight… but dude, did you not look at your pay stubs all year?

Did you not see whether your employer was taking out less for federal income tax… and fill out a new W-4 if it seemed too good to be true?

I realize the IRS fouled up on its withholding guidance for employers. I also realize that while the IRS put a withholding calculator on its website so you could tweak your W-4, the agency 1) did a terrible job of publicizing its existence and 2) did an even worse job of designing the thing. Really, the calculator is useless. Believe me, I tried.

Still… it’s incumbent on you to at least attempt to get a handle on your potential tax liability during the year, even if you don’t have a fancy return with scads of deductions and credits.

So here are a few basic steps you can take, if you’re a W-2 employee with a not terribly complicated return, to figure it out…

The total you get here should jibe with the “Medicare wages” on your W-2 come tax time.

The total you get here should jibe with Box 1 on your W-2 come tax time.

The total you get here will probably be your “total income” on your Form 1040.

The resulting figure will probably be your “adjusted gross” on Form 1040.

Once you subtract your standard or itemized deductions, you end up with “taxable income” on Form 1040.

To be clear, this is for a very simple return. If you have dependent children, you’ll have to figure out the child tax credit, which by and large is more generous under the new law. (Unless your kid is 17, in which case you can’t claim the credit even if he’s eating you out of house and home!) If you get bonuses or other supplemental income, you’ll have to rerun these calculations as the year goes on to reflect both your income and your withholdings.

My wife and I have run this calculation ourselves. (It was a little different under the old law — for instance, there was the personal exemption.) In years that we itemize, our expected refund or payment comes within 15% of the actual refund or payment. In years we take the standard deduction, we nail it within 3%.

That kind of certainty makes it easier to budget and to plan. And not get nasty surprises like the one Mr. Kraft got.

[Ed. note: Having said all that, you owe it to yourself to check out the 91 obscure “tax loopholes” Robert Kiyosaki and his team of tax professionals have compiled in the Rich Dad 2019 Tax Guide.

Of course, not all of them will apply to you. But the ones that do could deliver a five-figure windfall you never even expected till now. Don’t miss the one on Page 17 about the “paycheck loophole” that meant a cool $12,228 for one of Robert’s regular salaried employees — and that was only the first year he claimed it!

You can get a FREE copy of this guide — and we’ll cover shipping costs too — at this link.]

The holiday-shortened week is off to a quiet start for the U.S. stock market.

All the major indexes are in the green, but not by much. The most noteworthy earnings report is from Walmart, which had an excellent holiday season — shares are up nearly 4% as we write.

“According to FactSet, nearly 80% of S&P 500 companies have reported earnings so far this season,” says our Zach Scheidt. “And 70% of them have reported better-than-expected profits.”

Should that hold up, it will be the fifth consecutive quarter of at least 10% earnings growth year overyear.

Gold is now its highest since last April and only a dime away from $1,340. That’s a $30 leap in a week, nearly half of that move coming today.

Here’s a chart going back two years, with Greg’s annotations… 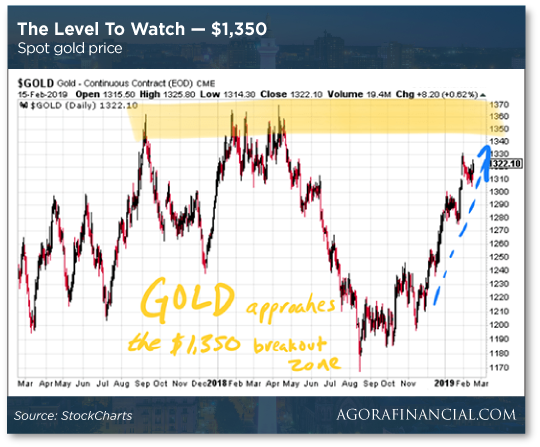 “Personally,” Greg says, “I’m rooting for gold to make a strong push toward $1,400 to set up another big test of resistance.”

If you’re a longtime reader, you’ll recall Greg earned the abiding hostility of gold bugs six years ago when he declared that gold had entered a bear market by falling below $1,650. “Antichrist” was how one reader dubbed him.

“I can only assume you’ll heap endless praise upon my inbox should I correctly pinpoint the next major breakout,” he says. Heh…

And now for a novel idea to reduce the national debt, now $22 trillion…

Someone started a petition at Change.org to sell the state of Montana to Canada for $1 trillion.

“We have too much debt and Montana is useless,” the petition reads. As for getting buy-in from Canada, “Just tell them it has beavers or something.”

Columnist Kristen Inbody of the Great Falls Tribune points out several thorny issues that would have to be resolved: “Would Montana still be named Montana or would we be Southern Alberta? Better Saskatchewan?” Also: “Does the universal health care start right away or is there a waiting period?”

Meanwhile, the individual who started the petition as a joke a week ago, one Ian Hammond from Alabama, is professing surprise at its popularity.

At last check, 8,052 people have signed it. “All in all this is pretty epic,” Hammond says.

“I think there is only one reason for the uber ‘progressive’ left proposing the ‘Green New Deal’ and that is they are trying to do the same thing that Obama did with the health care debacle,” a reader writes.

“Their game plan is for it to be an initial spectacular failure and then they tell the public in order for their ‘utopia’ to succeed that they must double down and implement full communism.

“I’ll give credit where credit is due: They are extremely focused and fanatical but frankly not very bright.”

The problem is that we’ve seen how single-payer health care works in other countries. We might not like it, but at least there’s a working model, a template. It gives us something to plan for.

We have no idea what a Green New Deal would look like… and it’s far more ambitious than schemes like “carbon taxes” and whatnot. Indeed it would require a level of top-down control the nation has never seen outside of wartime, or a perceived wartime-level crisis like the Great Depression.

On further reflection, it seems that green schemes might become the single defining issue of a new American civil war.

After we broached the subject of a new American civil war last month, we said that one nagging question was what would be the locus of the conflict? Supreme Court nominations and border walls seem like weak tea compared with slavery or independence from Great Britain.

But the wholesale reordering of society that would come from trying to make America “carbon neutral” in 10 years? If the people behind such notions are serious, the resistance is bound to be furious.

More than three years ago, we said the real issue surrounding “global warming” isn’t carbon, or even climate. It’s control.

We cited the former investment banker and government official Catherine Austin Fitts: “Let me tell you what the most dangerous policy action in the world is.

“It is to decide that a phenomenon such as climate change is our No. 1 problem, that we need urgent action on it before understanding who is going to control the policy discussion and implement the solutions. Build a consensus that man-made climate change is our No. 1 problem and I assure you that our mystery governance system will use it to achieve a global taxation system and more centralized control.”

“For years my wife has been tax-exempt at her part-time teaching job. My Social Security is not withheld. My three seasonal jobs are two deductions only. We are still MAD when our tax preparer said that because we had not had enough withheld there is a penalty (additional tax). This is new to us — costing us an extra $1,500. We have known we have to pay every year.

“is this happening a lot or just to us?

“You guys are the best. Is there any way to get this taken off because we are unaware?”

The 5: If we understand your question correctly, no.

The IRS did realize it screwed up withholding so badly that it’s adjusted the threshold for the under-withholding penalty, however. The agency says it is “generally waiving the penalty for any taxpayer who paid at least 85% of their total tax liability during the year through federal income tax withholding, quarterly estimated tax payments or a combination of the two.”

Typically the threshold is 90%.

How magnanimous of the IRS…

P.S. “Why,” a reader inquires, “do you tell me I can get the Rich Dad 2019 Tax Guide for free and you’ll include the shipping for free when it’s not free — you have to subscribe to Robert Kiyosaki’s newsletter first. I would love to have this book and if it saves me some money then I will subscribe.”

We’ll refrain from making jokes about people wanting free stuff these days without anything in exchange.

The answer is that the guide is free, but yes, it is a premium that comes when you sign up for a trial subscription to the Rich Dad Letter.

We’re confident the information inside can more than pay for the modest subscription cost. Full details of the offer here — no long video to watch.