“So far in 2019, the smaller the stock, the bigger the return,” says our wealth and income specialist Zach Scheidt.

And he’s not wrong… 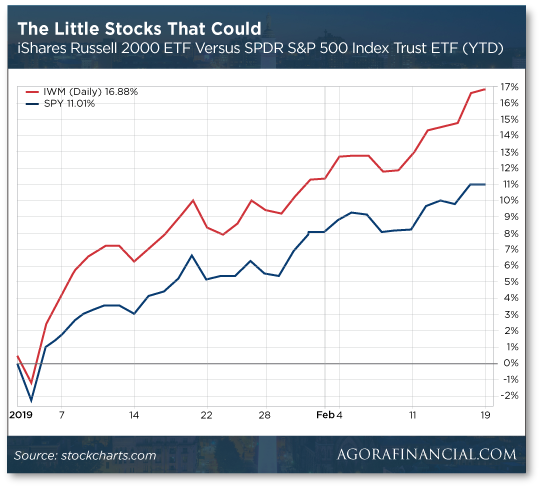 Not only that: “Take a look at the difference between large and small companies included in the S&P 500,” Zach says.

That’s a significant difference… and if you’ve been buying little-known stocks this year, you might realize twice the gains of those “water cooler” stocks. (You know… those high-profile companies everyone’s name-dropping at the water cooler.)

“Don’t worry, if you haven’t been focusing on the small-cap opportunities,” says Zach. “There’s still plenty of time to get your share of the profits.”

Even though mainstream pundits aren’t necessarily focusing on small-cap outliers, Zach says: “These are often some of the fastest- growing companies that the market has to offer.”

And the trend should continue into 2019…

“First, large-cap names have become too expensive,” says Zach. Those “water cooler” stocks again. You know the ones — FANG stocks that have dominated the markets for the past few years… with overblown prices to match.

“Starting in the fourth quarter,” Zach notes, “investors have woken up to the fact that these stocks are now expensive compared with the profits they produce.” So investors are trying to quit high-profile companies in favor of new alternatives.

“Second,” says Zach, “a strong U.S. dollar favors domestic companies.” For the last few weeks, the U.S. dollar has been trading higher compared to other currencies like China’s (trade war) and the EU’s (Brexit).

That’s tough for large, multinational corporations; not so much for smaller U.S. companies that have limited international exposure. “Investors are now favoring companies that operate primarily in the U.S.”

“Based on these advantages, I expect small-cap stocks to offer us some great opportunities this year.

“One other thing to keep in mind when it comes to small-cap companies,” Zach says:. “As an individual investor, you’ve got a big advantage over your institutional counterparts.”

Here’s how Main Street can get one over on Wall Street: “You and I can easily buy a full position in a stock without moving the overall market price,” says Zach. (Assuming you’re not investing full- bore into an individual position.)

Not only that, but retail investors can trade small-caps — for great profits — quickly and easily, whereas institutional investors have to take their time to wind out a position.

“When big institutions want to take a position,” Zach says, “it often takes them days or weeks to buy enough shares. And during that time, the price of the stock can move higher, causing them to pay more.

“That puts a big lumbering mutual fund at a disadvantage when investing in smaller stocks,” says Zach. So the advantage goes to Main Street investors…

“As we continue to see the market rebounding in 2019,” Zach says, “I’m excited about the opportunities that we’re following.

“I hope you’re participating in the gains these stocks are accumulating.”

[Ed. note: We’re putting out a challenge to our readers:

We want to show 100 readers how to become millionaires.

To make it happen, Zach and his team are pulling out all the stops…

And finally revealing a study that took three years to perfect.

Get the details now…

And join our mission — before midnight tomorrow — to help you become a millionaire.]

In fact, though February could have been an absolute market minefield — trade war drama, the will-they-or-won’t-they government shutdown plus the better or worse of earnings season — Alan believes investor sentiment has shifted.

“Despite these pressures,” he says, “it is truly a buyer’s market right now.

“In other words… what may have been a warning sign before, is now flashing bright green buy signs.”

Alan describes, for example, what happened in the case of Shutterfly Inc. (SFLY). After the company announced two big-time earnings misses on earnings per share and revenue, buyers came out en masse, “sending shares from sub-$40 levels all the way up to $47 by the next day — higher than before the [Shutterfly] reported earnings,” Alan says.

“This goes to show that buyers no longer see stocks as overvalued after the December fall,” says Alan. “And there are more opportunities being uncovered in stocks than there is bearish sentiment.”

Oil continues its climb to almost $57 for a barrel of West Texas crude.

“Despite gold’s surge,” says an article at Zero Hedge, “it is not trading as a traditional safe haven…”

“After correlating inversely with the S&P for much of 2018, the correlation flipped to positive in late -December,” the article continues. 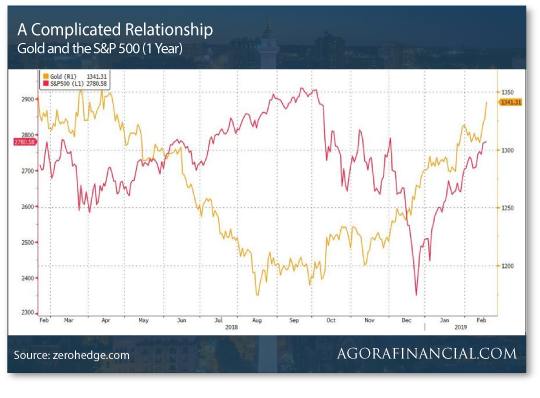 Hmm… of course, late December would be right around the time the Fed “flipped from hawkish to dovish, meaning that gold… instead regained its status as a hedge against central bank idiocy.”

Ah, yes… you can always count on Zero Hedge to call it as they see it.

As for gold’s correlation with the S&P 500, it’s tracking more closely than other safe havens like the greenback, T-bonds or the yen.

More gold curiosity? Its trajectory is also tracking with WTI, which that bottomed out in December “in the low -$40s to a year- to- date high of $55-plus+ today.” Curiouser and curiouser… other metals, too, are following the leader — gold, right? — up and to the right.

The price of palladium is something we’ve been following at The 5; its price “briefly touch[ed] $1,400 for the first time ever,” said Greg… and then sailed right on past. It’s now above $1,500 per ounce.

“The bull run has been driven by an acute shortage of immediate supply as car manufacturers scramble to get hold of the metal to meet more stringent emission controls,” Bloomberg reports.

So is palladium the new gold? Well, it’s certainly breaking through any resistance levels; gold’s yet to punch through its $1,400 per ounce ceiling.

“Queensland drivers will be able to add emojis to their personalised plates next month,” the Brisbane Times reports.

The emoji plates will make their debut March 1; the plates will include a mix of three letters and two numbers accompanied by one of five emoji options. 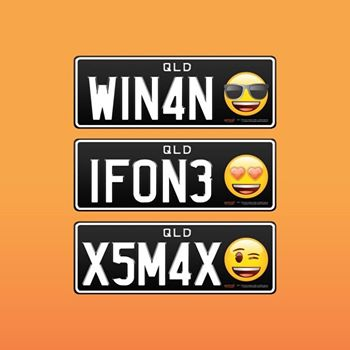 So misanthropes need not apply.

“However, a Queensland law expert has questioned whether the plates would be a hindrance to vehicle identification,” the Brisbane Times continues.

“Queensland Law Society Ppresident Bill Potts said the emojis could cause problems for the police’s number plate recognition system, which scans cars and checks whether the driver has outstanding warrants if the vehicle is unregistered.”

“Clearly the government is trying to sex up number plates,” says Potts, “with a view to making more money, and I can understand that. But the purpose of number plates is for the police to be able to identify vehicles.”

And with tongue firmly planted in cheek, he goes on to say: “There should be changeable emojis, so the face turns from a frown to a smiley depending on the driver’s mood.…”.

Mr. Potts continues. “If someone is in real trouble, the smiling turd should come up.”

With that, we *kissy face* the topic adieu…

“For the few returns I have done for my clients who are considered middle -class in this area (between $100K–-$200K), I have found that they are having to pay the IRS roughly $5,000 more this year than they would have under the old laws.

“When more and more people begin to see this huge transfer of money from their states in order to pay for the corporate tax cuts and buybacks, there is certain to be a backlash.

“But the thing I fear the most is that Democrats, seeing how the Republicans have shown that deficits no longer matter, will try to correct this by putting the SALT deduction back to where it was with no corresponding way to pay for it.

“Trump, having suddenly realized that he and his friends are also paying more federal taxes because of it, has already said that he would favor putting it back the way it was if the Democrats propose it.

“I’m not going to mention the name of my state, as I have seen that whenever your readers mention my state, they immediately label our citizens as ‘THEM!’ and would be happy to see ‘Us’ paying more to the IRS. This even though…our state pays far more to the federal government than we receive in benefits.”

The 5: Remember when Trump and his GOP lackeys showed off the postcard Americans would file their 2018 taxes on? 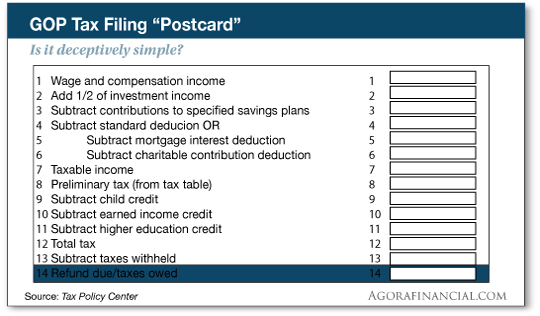 In answer to the question — “Is it deceptively simple?” — the answer’s a resounding yes! (On second thought, deceptive? Yes. Simple? No!)

And our reader from a state that shall remain nameless can attest to that.

P.S. Business is booming — but it’s no time to get lazy… That’s why we’re putting out a challenge to you: We want to show 100 readers how to become millionaires by the end of 2019.

To make it happen, Agora Financial is pulling out all the stops… And revealing a study that took three years to perfect… Get the details now before midnight tomorrow…

And join our mission to help you become a millionaire.