Crude prices are down slightly today… but in the context of the last two months, that pullback is all but irrelevant… 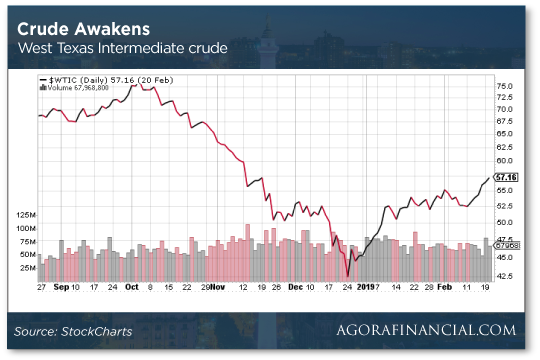 At just over $57 a barrel, West Texas Intermediate is up by one-third from its lows on Christmas Eve.

That’s translating to higher pump prices, too, as you’ve likely noticed — AAA says the national average for regular unleaded today is $2.38 — up 12 cents in just a month.

“Once left for dead, energy stocks are back with a vengeance in 2019,” adds our Zach Scheidt.

“Oil prices are on the rise following big production cuts in Saudi Arabia and new sanctions on Venezuelan product. And natural gas prices are spiking on record-cold temperatures across the U.S.”

Last week the energy sector within the S&P 500 Index jumped 5% — doubling the performance of the index as a whole.

“And it wasn’t just large-cap energy stocks on the move higher,” he hastens to point out.

You’ll recall the enthusiasm Zach shared with us yesterday about small caps… and that definitely extends to the energy sector.

“PSCE — the Invesco ETF that tracks small-cap oil energy shares — soared 10% just last week. That’s better than any other ETF on the market. In fact, the 10 best-performing ETFs last week were oil and gas funds.”

Zach is watching all of those names closely for possible recommendation in one or more of his trading services.

Only this morning, however, Zach recommended taking profits on a recent recommendation for 85% gains. And that’s on top of the 73% gain he urged his readers to bag yesterday.

All this with a recommendation he made only two weeks ago.

Gains like that can put you well on your way to millionaire status… and for only a few more hours, you too can get in on our “Million Dollar Moonshot” project. Check it out for yourself at this link, but please note the link goes dead tonight at midnight.

Most of the major asset classes are in the red today.

The Dow and the S&P 500 are both down about a third of a percent. The Nasdaq is down close to half a percent.

Bonds are also selling off, pushing interest rates higher. The yield on a 10-year Treasury is up to 2.7%.

And it’s not just crude losing ground in the commodity complex. All the precious metals are down, with gold back to $1,332. The darling of recent weeks, palladium, is at $1,446 — down $35 from this time 24 hours ago. (That crazy-good rally had to take a rest sometime.)

Meanwhile, the day has delivered a boatload of miserable economic numbers…

But aside from all that, Mrs. Lincoln thought the play was terrific.

For the record: $11 trillion in government debt around the world carries a negative interest rate.

That’s a 21% increase since October, says Bank of America Merrill Lynch — although it’s still below the record $13 trillion level of 2016. 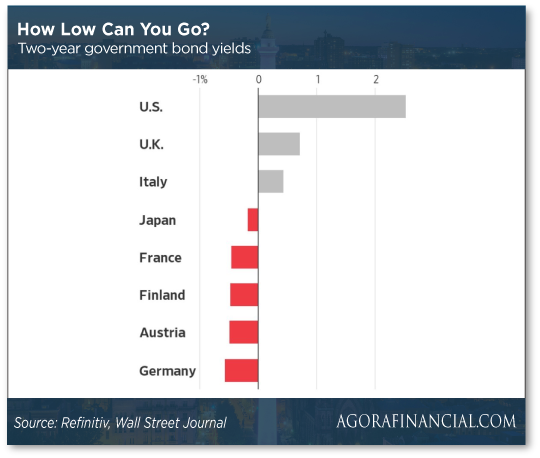 Governments and central banks have tinkered with negative rates in recent years on the theory that if people can’t earn a yield on government debt or in a bank account, that will force them to spend money and “stimulate” the economy.

It would be diabolical if it actually worked… but the evidence to date is that it backfires. Negative rates send the signal that people’s precious savings are even more at risk than they were before, which spurs those people to save more instead of spending.

Despite that body of evidence, the Federal Reserve Bank of San Francisco issued a white paper a few days ago saying when the next recession rolls around, negative rates would be a swell idea. Oy…

In another signpost on the road to “de-dollarization,” the German government says it won’t exclude the Chinese tech giant Huawei from the country’s 5G wireless network.

As you might be aware, the U.S. government believes Huawei’s gear is laced with spyware. Washington is looking to ban Huawei from selling any equipment to companies building out 5G infrastructure in the United States. In addition, Washington is urging its allies to do likewise.

The government in Europe’s biggest economy is saying no. “A direct exclusion of a particular 5G manufacturer is currently not legally possible and not planned,” a spokesman for Germany’s Federal Interior Ministry tells CNBC.

From where we sit, this move comes from the same place as Europe’s attempts to keep trading with Iran despite renewed U.S. sanctions. As France’s finance minister said last May, “The international reach of U.S. sanctions makes the U.S. the economic policeman of the planet, and that is not acceptable.”

Washington can exercise that level of power because the dollar is the globe’s reserve currency. The question is how much longer that can go on.

And you think feral hogs are a problem in Texas? Ya gotta feel for the owner of this grocery store in Hong Kong… 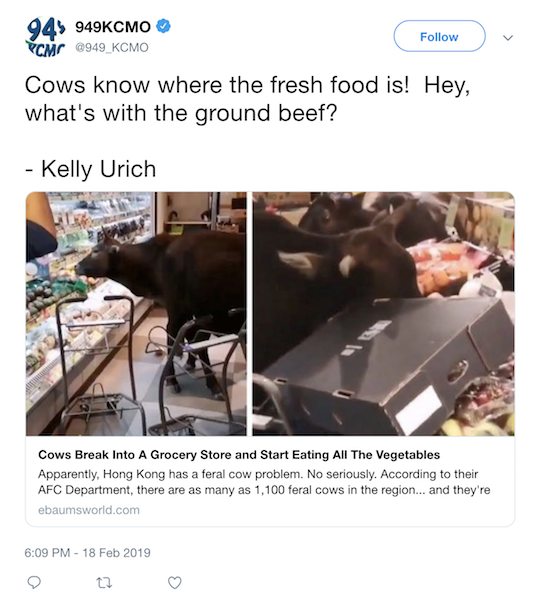 We had no idea feral cows are a thing in Hong Kong… but the South China Morning Post reported last year that they’re a “long-standing” problem thanks to relentless urbanization. They number about 1,100 according to the Agriculture, Fisheries and Conservation Department.

About 30 of them are found in the town of Mui Wo… and one night this month about four of them wandered into the Fusion supermarket.

They made a beeline for the produce department and settled in for a feast. Cleaned it out, in fact. “Eventually, staff and store patrons managed to corral the cattle out of the store,” says an account at Vice.

The local district councilor says he hasn’t heard of similar incidents before, but he’s worried they’ll happen again, given how people like to feed the cows fruit.

[Flashback: The 5 had an enormous amount of fun with feral hogs back in 2013 when a Federal Reserve official invoked them during a discussion of market reaction to monetary policy. Well, you had to be there…]

On the subject of botched tax withholding, a reader writes…

“While I agree we’re responsible for checking our pay stubs and ‘adjusting’ for the IRS guidance errors, I have to wonder why the W-4 calculations are still based around exemptions and calculated deductions when neither applies in the New Tax world.

“For my own part, I expected to be on the 35% side of the equation, living in New Jersey and losing several tax deductions. So I increased my contribution to my 401(k) to bring my taxable income down $3,000 and increased my fed tax deduction by $3,000 and I still will owe around $5,000, based on a tax bill that is significantly higher than last year.

“Thanks for the help!”

The 5: Well, the “worksheet” we offered on Tuesday is useful for a rough estimate through the year of what you’ll owe or what your refund might be so you don’t get major surprises.

We concede it’s not as useful for tweaking your W-4 so you hit that sweet spot of being within only a few hundred bucks of your actual liability by the time you file. If you can figure that part out, please write us back…

On the related subject of expected refunds that aren’t materializing, we heard from a Platinum Reserve member…

“There have been a lot of people wondering where the economic strength (such as it was) came from in 2018. If there were significant numbers of people who underpaid their tax withholdings, like the guy you mentioned who owes over $10,000, that could add up to what looked like a big raise but wasn’t. That is, he was spending money that otherwise would have gone into tax withholding.

“Now tax season is here, withholdings have gone up (meaning their current monthly take-home pay is down) and they have to come up with the cash to pay what they should have paid last year.

“It looks to me like consumer spending may be dropping in the near future. Any thoughts on this?”

The 5: Seems plausible. But as we said last week, it’s still early days in filing season. It’s possible this dip in both refunds issued and refund amounts will still revert to the mean…

“I live in Montana!” a reader enthuses after someone from Alabama started a petition drive to sell Montana to Canada for $1 trillion, thereby reducing the national debt.

“I would rather be here in the frigid north than hanging in the humid swamp they call Alabama. If for some reason this actually would happen, us Montanans would be a step ahead of Alabamians.”

What followed in the reader’s letter was a gratuitous political commentary, which we’ll excise today. Although curiosity did spur us to look up the 2016 election results. Trump carried Montana 56%-36%, but Clinton won the two big counties dominated by Missoula (University of Montana) and Bozeman (Montana State).

And from a Canadian reader, an inquiry: “I’m in favour of us buying Montana. Can you loan us $1 trillion?”

P.S. Only a few hours remain in our “Million Dollar Moonshot” challenge.

We’re looking for a few hardy readers who want to become millionaires. Not everyone will have what it takes. Do you?

Decide for yourself here. This link will be available through midnight tonight.