Easy “A” on Options

“I strongly urge you to consider adding stock options to your investment strategy,” says wealth and income specialist Zach Scheidt.

Sound advice… but only if you actually understand how stock options work.

“To be fair, options do sound complicated, involving words like ‘contracts,’ ‘strikes’ and ‘expiration,’” Zach says. “And if used incorrectly, they can quickly lead to big losses.”

Exhibit A: We give you Drew Millard, contributing editor at the website The Outline…

“I first started using Robinhood a few months ago,” Millard says, “just as the stock market was constantly building upon itself.” (An inelegant turn of phrase but… whatevs.)

For Millard, the Robinhood app appealed to him for two reasons: First, “it’s a nice-looking thing that lives on your phone.” So a sleek, user-friendly app that’s convenient. Check.

Second, Millard says: “Traditional brokerage firms such as TD Ameritrade or E-Trade charge a fee every time you buy or sell a stock; Robinhood doesn’t.” So no fees — also check.

“The [Robinhood] app made investing seem not so different from a phone game,” he says.

After the briefest of tutorials — “despite not quite understanding what options trading actually is” — Mr. Millard was approved. His phone’s screen lit up with the following message, confetti and all… 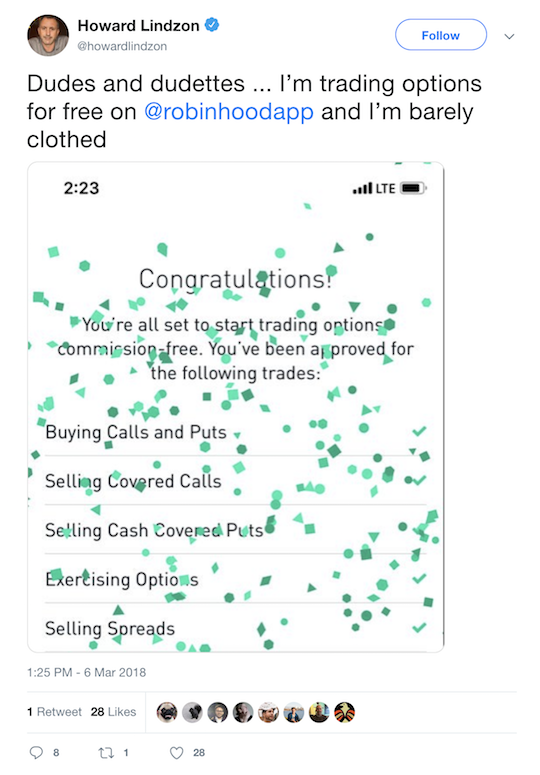 Livin’ the dream: trading options in your underpants…

Needless to say, our hapless Mr. Millard was out of his element and lost his lunch (we mean that literally — the guy’s a millennial) on the cheapest “call” option he could find, Under Armour for $19.

“The fact that I only fully understood how this dangerous short-term financial product worked after I’d actually bought the thing probably means [it’s] a terrible idea for Robinhood to offer this as a service,” Millard concludes.

Sure, blame it on “dangerous” options and Robinhood… sheesh.

“On the other hand, few instruments on Wall Street offer as much profit potential in such a short amount of time, Zach says.

“But it will only make sense if you understand how options work in the first place.”

Second: “A call option gives the buyer the right to buy that given stock for a set price, called the strike price,” says Zach. “Those rights expire on a set date.”

Exhibit B: “Somewhere out there,” Zach says, “a trader is thinking that Apple shares could be worth $190 or more by the end of the year.”

“But with the market’s volatility, he’s not willing to stake a large amount of cash on his analysis.” So the trader turns to the options market instead.

“With the option, he has the right to buy 100 shares of Apple stock for $175 — no matter what they’re currently selling for.

If the trader’s analysis winds up being wrong — Apple never gets above $175 by January 2020 — his option expires worthless.

Now imagine being on the other side of this trade…

“So you could sell call options against your Apple stock,” Zach says. “You essentially create a contract saying that you’re willing to sell 100 shares of Apple at the option’s strike price anytime before the option expires.

“That’s instant cash for your portfolio,” says Zach, “and there are a few ways it could play out.”

First: “If Apple ever tops $175 a share, the person who bought your promise — the call option — could ask you to fulfill its terms.

That’s not so bad… really!

Second: “It gets even better if Apple shares never trade above $175,” says Zach. “Sure, you don’t see a lot of capital gains on your stock. But you still collect every dividend Apple pays out.”

Third: “And if the option expires worthless, you get to keep the $1,500 you received for selling the option.

“So selling calls against your stock shares is a great way to earn income in up-and-down markets,” Zach says.

“During upturns, you can sell shares for a nice profit,” he continues, “and you can keep cash rolling in when the stock market heads south.

“Best of all, volatility tends to push up option prices — meaning you’ll collect bigger payouts by selling them!”

[Ed. note: Everything we’ve just described is the easiest way we’ve ever found for you to make an extra $2,000 per month.

In fact, we’re so confident that you can make — at least — $2,000 per month if you follow the strategy outlined on this page… that… our executive director guarantees it.

Yes! We’re guaranteeing you will be shown how to make a minimum of $2,000 a month using this strategy.

But only if you hurry.

I cannot guarantee how long our publisher will allow us to keep this video online.

If at all interested, you need to click here to see how to make a minimum of $2,000 per month — guaranteed.]

However, in order to keep federal money — totalling $3.5 billion — Newsom had opted to complete a seriously truncated train connecting Bakersfield with the Central Valley.

But now the project might be scrapped entirely: “The feds (and a gloating President Donald Trump) are swooping in to try to get their money back,” Reason says. 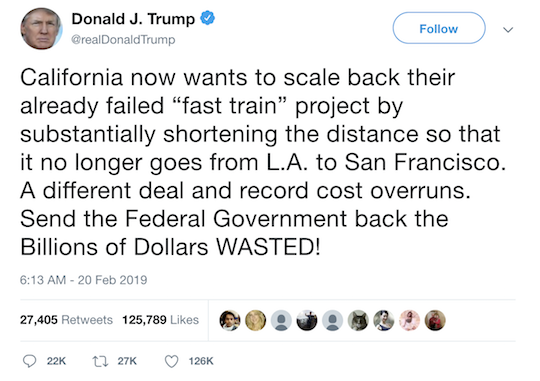 In a letter sent Wednesday, the Federal Railroad Administration (FRA) informed the state it would be cancelling “$900 million in federal funds set aside to assist in the construction of the Central Valley portion of the route.” Unless the state of California can make a case that the shortened train conforms to original bullet train plans.

“[The letter] also warns that the FRA may terminate the cooperation agreement entirely and attempt to claw back the money it has already sent.”

Gov. Newsom’s going to the mattresses and referencing the state’s opposition to Trump’s wall: “It’s no coincidence that the administration’s threat comes 24 hours after California led 16 states in challenging the president’s farcical ‘national emergency.’”

“This is California’s money,” Newsom says, “and we are going to fight for it.”

“Another one bit the dust!” says our breakthrough technology expert Ray Blanco. “It’s an all-too-common story for biotechs trying to cure Alzheimer’s disease.”

“Biotechs and Big Pharmas alike have failed again and again,” Ray says. “It could be that we fundamentally don’t understand this disease yet.

“Clear out the plaques and you stop the progression of Alzheimer’s, the theory goes,” he continues. “But crenezumab’s failure is more evidence that this theory isn’t holding up very well against cold reality.

“In the meantime,” Ray says, “several… biotechs are working on alternatives.”

The biotech’s currently working on “engineered antibodies that target these misfolded variants.”

And targeted therapy “should allow for higher dosing and greater clearance of toxic species of this protein,” says Ray.

“Another neuroscience biotech… is taking a completely different approach to Alzheimer’s.

“Instead of going after protein plaques,” Ray says, “[the company] has developed a platform designed to alter the inflammation-signaling cascade in stressed brain cells.” All of this, aimed at reducing brain cell death, or apoptosis.

“If history is any guide, Alzheimer’s drug development is an incredibly risky proposition,” Ray says. “With the risk, however, comes a shot at incredible rewards.”

An effective Alzheimer’s drug that does more than just mask symptoms but actually delays the disease’s progression (or even provides a cure!) “would almost instantly become one of the best-selling drugs of all time.

“If it’s one of [these] ‘moonshot’ Alzheimer’s biotechs, we could end up seeing gains that will be in the record books from current prices.”

Ray’s got the inside scoop on an extraordinary neurotech breakthrough: Shares of this tiny West Coast startup might skyrocket.

And company insiders have already gobbled up 11,843,747 shares of the company’s stock… in a single day.

Whatever they know, the message is clear. Something’s happening — and this one looks like it’s about to make a lot of people very rich.

Get the details while you still can by clicking here.

Hmm… what’s to be done about a mountain-size heap of garbage within city limits?

If you’re in Copenhagen, the answer’s obvious: Ski down it.

(Are you as shocked as we are? Not about the skiing — we’ll get to that in a second. No, we’re shocked — nay, scandalized — that they even have garbage in a Scandi paradise like Denmark… heh.)

“The waste is actually inside Copenhill, a waste-treatment plant 10 minutes from downtown Copenhagen,” Reuters says. “Its main facility is a futuristic building with a sloping roof 85 meters high that’s covered in a material called neveplast. It looks just like a ski slope, except it’s green.” 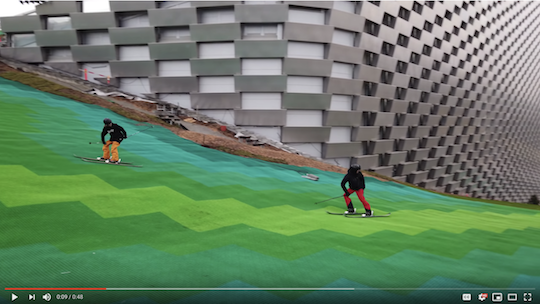 And for those not down with the metric system, that’s about 279 feet high…

The plant started operating in 2017 and is a giant leap forward for the country as it tries to become the world’s first carbon-neutral capital.

As for the recreational slope, it opens to the public year-round come spring.

“It’s a slightly different experience than to skiing in real snow,” says ski enthusiast Tommy Christensen, who’s already tried out the slope. We’re assuming he’s a ski enthusiast and not a waste-treatment enthusiast. But… to each his own.

Now for the real question: What to name this “trashy” ski slope? Our fave? The Clutterhorn.

P.S. We’re so confident that you can make — at least — $2,000 per month if you follow the strategy outlined on this page that Agora’s executive publisher guarantees it.

It’s a strategy he’s been using in his own account for years and — it’s so simple — he did a live demo showing an 8-year-old child how to use it.

We’re guaranteeing we will show you how to make a minimum of $2,000 a month using this strategy… but we can’t guarantee the page will be up for long.