The Worst Thing You Can Do With Your Tax Refund

“Taxpayers are responsible,” a reader grouses, “nobody else.

“It’s up to us to claim enough withholdings to get money back. Actually, that’s the worst thing any of us could do: lending the government money for free, waiting for a tax return.

“The best option is getting it all back weekly.

The 5 doesn’t disagree with the reader… we’re totally down with personal responsibility.

We’ll add to that, our coverage of the TCJA and IRS tomfoolery this tax season has — ultimately — put the onus on taxpayers; we’ve even included a next-to-foolproof method for figuring out your own withholdings using your pay stub. (Pssst… skip the IRS’ out-of-order withholdings calculator.)

All that to say though: easier said than done. Especially when this is the filing the IRS really wants… 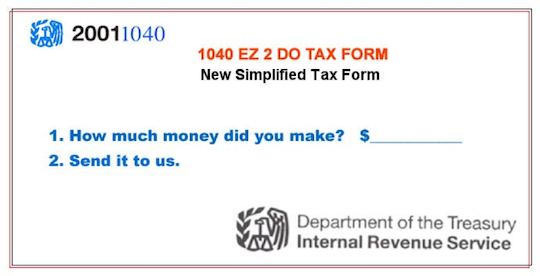 (By the way, kudos to the reader for using snowflake as a verb… we like.)

Piggybacking on our reader’s sentiment…

“When you get money back,” Robert says, “it’s likely you’ll spend it right away on liabilities like a vacation or a new car.” 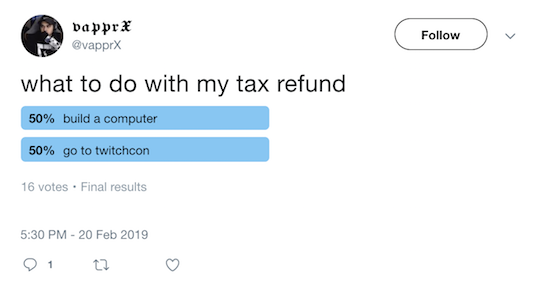 Or at best, Americans might spend tax refunds on paying down debt.

Perhaps the worst thing you can do with tax refund money, according to Robert, might surprise you.

“If people aren’t paying off their debt or buying some new knickknack,” he says, “the conventional wisdom is to put your tax return into savings.

“You put it into an account that makes next to nothing in interest,” says Robert. Plus, he says, “you can now be more tempted to spend it.”

So if you do get some cash back from the government…

“Rather than view extra money as an asset,” he says, “[view] it as an expense” and “pay yourself first.” (Emphasis added.)

“A tax return is the perfect time to seed-fund your investment account,” says Robert. “Spend some time deciding what you want to invest in — paper assets, real estate, commodities or business — and use your tax return as the initial funding for that investment activity.”

Or… “Start a side business,” Robert recommends.

“Tax laws are written to encourage investing and business,” he says, “so the real tax benefits go to those who practice in those areas.

“By setting up a side entity,” says Robert, “you can realize significant tax benefits by writing off your expenses for the business.

“This means that if, for instance, you want to get into real estate investing, you can write off all expenses related to that activity — including travel, education and more.

“This is a key step,” Robert continues. “Because if you simply record all your finances as personal earned income, you have very little recourse to tax savings.

“You won’t believe how good it feels to keep even more money on hand through the smart management of your money via a legal entity like an LLC or S corp.”

Last — and this is important — use your tax refund to “hire a CPA,” says Robert.

“A good CPA will be able to sit down and help you plan out the best way to maximize your investment fund and take advantage of your legal business entity.”

“So this tax season,” Robert says, “make a true investment in your future by putting that tax return to work for you in a way that will pay big dividends down the road.”

“When I first shared this information, my colleagues were SHOCKED!” Robert says. “Even one of my lawyer friends was unaware of what I had published.”

To the markets, where Home Depot’s earnings are blamed for a shaky start…

To wit, “Construction on new houses sank 11% in December to a more than two-year low,” says MarketWatch.

In the last month of 2018, housing starts dropped to an annual rate of 1.08 million from 1.21 million in November — this via a report incidentally delayed by the government shutdown. 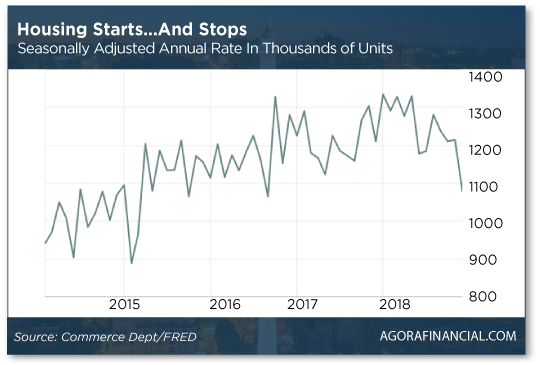 The silver lining? “Builders applied for more permits in a sign that a rebound may be near,” MarketWatch notes. Not only that but mortgage interest rates are the lowest they’ve been in a year.

Tesla’s CEO Elon Musk can’t seem to help himself… In yet another squabble with the SEC, the agency appealed to a federal judge Monday to hold Musk in contempt for violating the terms of an October settlement.

A couple hours later, Musk had second thoughts about his original tweet and sorta corrected himself; he changed the figure to 400,000.

Thing is, Musk’s last legal wrangling with the SEC in October concluded with him agreeing to let Tesla execs approve his texts — as relate to the company — before Musk hits send.

“In a court filing,” CNN says, “Tesla conceded Musk did not receive preapproval for his posts, but the company claimed that he didn’t need it.

“Tesla said the language he used was based on information the company made public 20 days earlier during its Jan. 30 earnings call…”

If a federal court charges Musk, he faces a fine of $1,000 per day from the time he’s found to be in contempt until he’s in full compliance with the terms of his settlement with the SEC.

Tesla’s shares have lost about 2.5% since the SEC and Musk started circling each other — again.

“Palladium hit a new record high on Monday as the threat of strikes in the South African mining industry raised fresh concerns about a supply deficit for the metal,” Reuters says.

Palladium hit a peak of $1,536.50 per ounce yesterday and — for a metal already in short supply — news of a strike will likely drive prices much higher.

“At least 15 mining firms in South Africa, home to the world’s biggest platinum group metals deposits accounting for over 90% of global output,” says Reuters, “have received notices of strikes next week in support of colleagues at Sibanye-Stillwater who downed tools over wages and job cuts.”

Remember, palladium mining is generally a byproduct of platinum mining; speaking of, the price of platinum rose 0.9% yesterday, to $848 an ounce.

According to Miguel Perez-Santalla of Heraeus Metal Management: “The threat of the South African mines strike spreading to the platinum mining industry is enough to make people nervous and that’s why we’re seeing some short-covering in platinum and palladium, driving both the metals higher.”

“The dominoes continue to fall in the battle for nationwide marijuana legalization,” says our cannabis stock expert Ray Blanco.

The governors of Connecticut and Illinois both announced legalizing marijuana is a top priority for their states. That might have something to do with California reporting $300 million in tax revenue so far from the legal marijuana industry. (Can’t pass up that sweet, sweet revenue.)

Ray notes that figure would be much higher if California regulators shaped up.

“The message is clear here: Legal pot is basically a free source of tax revenue from a political capital perspective,” Ray says.

And Illinois’ Gov. Pritzker “and the tax collectors in Springfield probably realize something else too…

“With Illinois sharing borders with Indiana, Kentucky, Iowa and Wisconsin — all states with no legal marijuana laws, medical or otherwise — the state has an opportunity to cash in from cannabis tourism as neighboring residents cross the border to score legal weed.”

Of course, Connecticut has the opposite situation: “To the north, Massachusetts has already legalized recreational pot. To the east and west, the governors of Rhode Island and New York have both said that they’re on track to do the same.

“If Connecticut lawmakers want to avoid padding their neighbors’ tax coffers,” Ray says, “they had better move toward legalization — and fast.”

“Will New York’s Recreational Marijuana Policies Be as Dumb as California’s?” reads a headline at Reason.

“New York may be following California’s bad example and legalizing recreational marijuana in all the wrong ways,” Reason continues, “guaranteeing an oppressive, potentially punitive environment where the government decides the market’s winners and losers.”

The governor appears to be bowing to pressure from the New York Medical Cannabis Industry Association that’s submitted five reasons why homegrown pot should be prohibited if and when New York legalizes recreational pot.

(Do you find it questionable the association doesn’t mention homegrown pot might cut into their revenue?)

“Let’s dismiss the dumbest of these arguments first,” the article says. “Bans are what prompt black markets to crop up.

“The health questions raised by homegrown marijuana are issues that consumers should evaluate for themselves,” says Reason.

To the last point, the New York Medical Cannabis Industry Association: “The organization is arguing that the state should legally ban a behavior unless it produces a revenue stream for the state.”

For example: “Just think of how much revenue a state could get if it banned cooking at home entirely,” Reason says, “forcing residents to get all their meals from restaurants, thereby requiring everybody to pay more in sales taxes.”

P.S. If you haven’t filed your taxes yet, I strongly advise you to go here now.

It’s all about how to save big-time on taxes this year.

This might sound too good to be true, but Robert’s already done all the hard work for you.