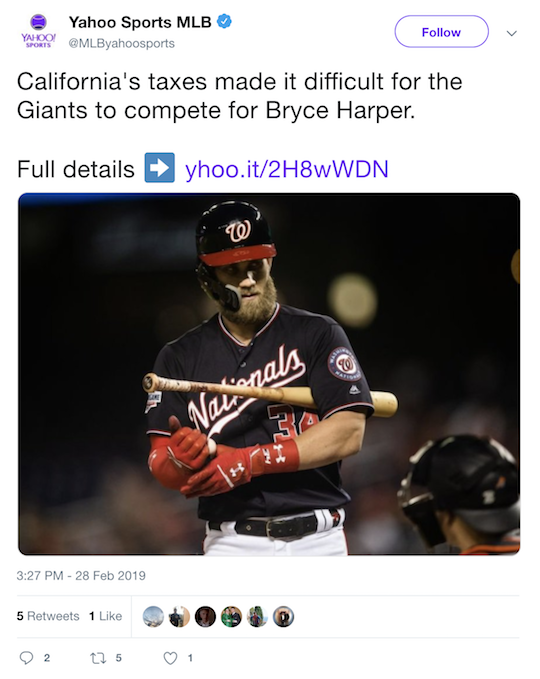 As you might have heard, the free-agent baseball phenom Bryce Harper has signed the biggest contract in the history of North American sports — $330 million over 13 years — to play for the Philadelphia Phillies. (After inflation, it’s not really a record, but we won’t split hairs today.)

The Giants came close, according to NBC’s regional sports network in the Bay Area… but reporter Alex Pavlovic says the team “would have had to go well over $330 million to get it done because of California taxes.”

The city of Philadelphia imposes its own income tax as well: If Harper chooses to live within Philadelphia city limits, the rate will be 3.8809%. If he opts for the burbs, he’ll pay 3.4567% — in which case his combined city-state rate would be less than half that of California’s.

Granted, baseball players are on the road so frequently that only about 40% of their income is subject to income tax in their home state. (That’s how it works with pro athletes generally.) Regardless, Harper will log a substantial savings.

But wait: Part of Harper’s compensation is a $20 million signing bonus… and “Pennsylvania is one of the few states that includes a true signing bonus as allocable income,” writes Sean Packard at Forbes.

Packard — who does financial planning for athletes — calculates Harper will be out an extra $603,109 as a result.

Meanwhile, we got to wondering… Did the golfer Phil Mickelson ever follow through on his threat to leave California?

In early 2013, Mickelson generated a fecal storm when he said he was thinking about it: “I will be making some drastic changes… If you add up all the federal and you look at the disability and the unemployment and the Social Security and the state, my tax rate’s 62, 63%, so I’ve got to make some decisions on what I’m going to do.”

At that time, the top marginal rate on federal income taxes had just jumped from 35% to 39.6%… and a slew of Obamacare taxes on high earners were kicking in. But the clincher was that at the same moment, California’s highest marginal rate jumped from 10.3% to 13.3%.

Mickelson wound up apologizing a couple of days later: “Finances and taxes are a personal matter and I should not have made my opinions on them public.”

But did he actually change residency? Not according to the official website for the 2019 Masters… 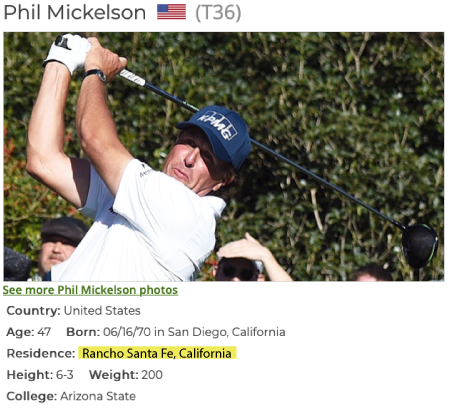 But they hadn’t lived there in several years, having bought another place in Rancho Santa Fe. Golf magazine describes it as a “Mediterranean-style compound” in a profile article published only last summer.

Looks as if he stayed put. The California tax authorities are surely pleased…

[Ed. note: As you must know, the very wealthy know how to seize on carve-outs in tax code to safeguard huge amounts of their income from high tax rates.

What you might not know is how you too can take advantage of these “loopholes.” That’s where Robert Kiyosaki and his team of tax experts come in with the Rich Dad 2019 Tax Guide. It’s packed with 91 tips and tricks to maximize your refund (or minimize what you owe). The “paycheck loophole” on Page 17 alone could be worth $13,000 or more.

So much for a monster rally on news that the U.S.-China trade war is close to resolution.

Over the weekend, The Wall Street Journal reported the two governments are “in the final stages of completing a trade deal, with Beijing offering to lower tariffs and other restrictions on American farm, chemical, auto and other products and Washington considering removing most, if not all, sanctions levied against Chinese products since last year.”

The Dow opened more than 100 points up this morning but has since given it all back, the index teetering on the 26,000 level. The S&P 500 is barely in the green, the Nasdaq a little more so.

If this is a “buy the rumor, sell the news” thing… we’d hate to see what happens when real news of an agreement comes in. Heh…

Because yesterday was Sunday, we’re a day late in marking the 10th anniversary of “the mother of all buy signals.”

“What you’re now seeing,” he said, “is profit and earning ratios are starting to get to the point where buying stocks is a potentially good deal if you’ve got a long-term perspective on it.”

OK, so his handlers couldn’t drill the lingo into him quite right. We presume he meant “price-earnings ratios.” 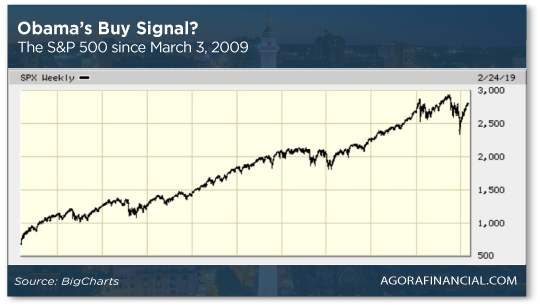 Gee, it’s almost as if he knew something others didn’t…

In theory, FASB is a private nonprofit entity. In reality, it is highly subject to political influence. On March 9 — the very day the S&P bottomed — word slipped out from Washington that Reps. Barney Frank and Paul Kanjorski planned to schedule a subcommittee hearing clearly aimed at strong-arming FASB into changing the rules.

Which it did three weeks later.

Meanwhile, none of the problems that led to the Panic of 2008 or the “Great Recession” has been fixed. They’ve just been papered over.

QE continued in fits and starts through 2014. The result was a quintupling of the Fed’s balance sheet from $900 billion all the way to $4.5 trillion. The Fed began slowly reversing the process in late 2017, but because the stock market threw a hissy fit late last year the Fed is telegraphing its intentions to put this balance sheet reduction on hold sometime this year.

And the too-big-to-fail banks? They’re even bigger. Just swell…

For the record: The debt ceiling is once again in effect.

The national debt rests at $22.1 trillion this morning, and it will stay there until Congress and the White House can come to some sort of agreement. In the meantime, the U.S. Treasury will resort to what it calls “extraordinary measures” such as borrowing from government pension funds to stay under the ceiling.

Heh… These “extraordinary” steps are starting to look mighty pedestrian. There’s been a debt-ceiling showdown every odd-numbered year this decade… and there was a bonus showdown early last year.

This time, Treasury’s accounting shell games will probably buy time until July — maybe September or October at the outside.

At that time, Uncle Sam is staring down default. What would that look like? We explored that question in depth during the last showdown in early 2018.

“Mike Burnick is correct: A stock isn’t necessarily a good investment because it pays a dividend,” a reader writes after we explored the recent round of companies cutting dividends.

“That might have been true at one time. But 10-plus years ago, my retirement accounts were cut in half because I had embraced the venerable ‘dividend growth’ investing strategy.

“That’s the ultra-safe, long-view approach based on the premise that:

“Wrong! It can all be fake, and it can blow up.

“Corporate America is returning more cash to shareholders than it’s making in profits — because trillions in buybacks and dividends have been financed with debt. Hence the ‘everything bubble.’

The 5: It won’t. But Mike’s point is that you have to choose wisely among dividend payers — not that you need to move to an asset allocation of gold and ammo (although we have no problem with either as part of a well-balanced portfolio).

We understand where you’re coming from. But don’t throw out the baby with the bathwater…

“Enjoyed the lighter segment Friday over trademarking the descriptors of large beers,” writes a semiregular.

“Years ago the warehouse that I visited frequently had a problem regulating the environment. The answer: Big Ass Fans. That’s both the name of the company and their original product line. Maybe they could get in on the action since their use of the descriptor preceded the mentioned beer marketing. That would really make the beer hit the fan!

“Too bad you had to follow that with the Bolton reader mail.”

The 5: Yeah, sometimes the mailbag can take a too-serious turn after we get through our “quirky” item of the day. Just part of life’s rich pageant…

“I get a lot of emails each day (60% financial),” a reader writes, “but the highlight of my emails is reading The 5 Min. Forecast. Keep up the great writing.”

The 5: We’ll try. Letters like yours help us keep going!

P.S. The new tax law closed many “loopholes”… but many others remain open, and it’s more critical than ever that you know about them so you can take advantage.

Robert Kiyosaki and his team have just put the finishing touches on the Rich Dad 2019 Tax Guide — packed with 91 things you could do to slash your tax liability, fully revised and updated to reflect all the changes to the law.

This information could be worth as much as $23,966 to you. And you can obtain it free. Click here and grab your copy now before you file.