Conclusion: 40% of the firms don’t use AI in a way that’s “material” to their businesses. “Companies that people assume and think are AI companies are probably not,” says MMC’s chief of research David Kelnar.

Little wonder: “MMC found that startups that claim to work in AI attract 15–50% more funding compared to other companies,” reports the techy website The Verge.

But it’s not necessarily a case of deception. Forbes points out that third-party analytic websites often place the AI tag on a firm.

Of course, once that happens the firm might not be in a hurry to set the record straight…

Heh… It reminds us of when many companies were changing their names to include the word “blockchain.”

In October 2017 we recounted the tale of an outfit in Colorado called Bioptix that renamed itself Riot Blockchain. 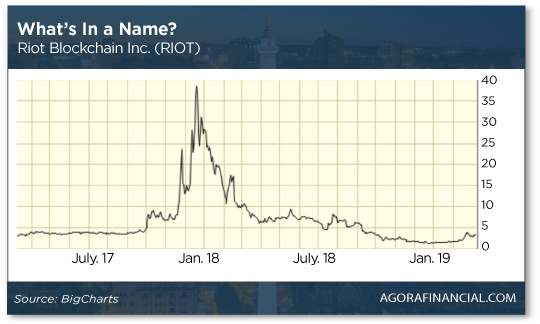 It’s shaping up to be five straight days of losses in the U.S. stock market, thanks to an ugly surprise in the monthly job numbers.

The wonks at the Bureau of Labor Statistics conjured a mere 20,000 new jobs for the month of January — juuust a wee bit less than the “expert consensus” of economists looking for 175,000.

On a chart going back to the start of the “Great Recession” in late 2007, the number looks like this… 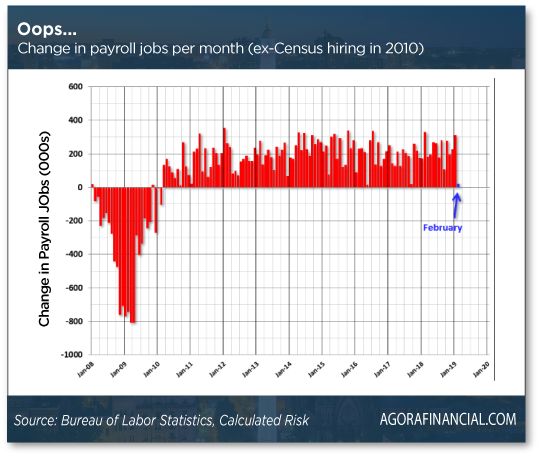 But the unemployment rate — which is calculated from a separate data set — fell from 4% to 3.8%, as folks who’d entered the workforce in recent months actually found work. And the real-world unemployment rate from Shadow Government Statistics tumbled to 21.1% — still awful, but the lowest since September 2009.

Still, it’s that 20,000 number traders are fixated on — even though it’s way too soon to call it the start of a trend — and with that, the Dow has shed another 150 points.

At last check, the Big Board has slipped 700 points on the week.

“Stocks have marched higher largely uninterrupted since late December. The major averages have enjoyed a historically strong start to the year, each posting double-digit gains before the end of February. I can’t imagine a scenario where the market could sustain this upward trajectory.”

“March is historically one of the strongest months for stocks,” says Alan Knuckman — our eyes and ears in the Chicago options trading pits.

“In fact, March kicks off one of the best two-month stretches of the year with March and April.

According to Bespoke Investment Group, March and April represent the best two-month stretch on the calendar over the past 20 years.”

And no, the strong performance of January and February 2019 does not suggest an exception to the rule this year. “Looking back at historical S&P 500 data,” Alan goes on, “the index has been up in March five of the six previous years when there has been a double-digit gain through the first two months of the year.

“You’d have to go all the way back to 1931 to find negative March performance under these conditions!

“And besides pure performance, chart trends are also pointing to more gains in both the near term and for the remainder of the year,” Alan adds.

“JC O’Hara of MKM Partners pointed out earlier this week that the S&P 500 has traded above its rising 10-day moving average for over a month — 39 days to be exact. This is the longest streak of its kind since April 2010.

“O’Hara also pointed out that rallies of this nature have been a good sign for momentum to continue through the first quarter.

“And when stocks have been strong in the first two months, equities have returned an average of 20% for the full year.”

[Ed. note: To make the most of the opportunities before you this month, you’ll want to jump on Alan’s proprietary trading indicator. Last week alone it delivered gains of 100% and 101% — on trades he recommended no more than three weeks earlier.

Check out Alan’s introduction to his system right here. It’s available to view now through Monday night at midnight.]

The bid on the Midas metal is up $12, back within sight of $1,300. Today’s job number is the last one before the Fed’s next policy meeting in less than two weeks.

Lost in the commotion over the job numbers is a housing number that for once doesn’t totally suck.

Housing starts jumped 18.6% in January — a respectable recovery from a nasty December in which California wildfires skewed the number. Better yet for the housing industry, the strength is in single-family homes… although apartments and condos were no slouches, either.

Meanwhile, permits — a better indicator of future activity — inched up 1.4%.

While not directly related to the economy or the markets, we’re compelled to note the jailing of Army whistleblower Chelsea Manning.

Manning was called this week before a federal grand jury in Virginia that’s investigating WikiLeaks. In a statement released yesterday, she said, “All of the substantive questions pertained to my disclosures of information to the public in 2010 — answers I provided in extensive testimony during my court-martial in 2013.”

She refused to answer the questions, so today she’s been jailed for contempt.

That last point is the reason the Obama Justice Department didn’t pursue a case against WikiLeaks or Assange. If it did, it would have to prosecute any media outlet that reports on classified information. 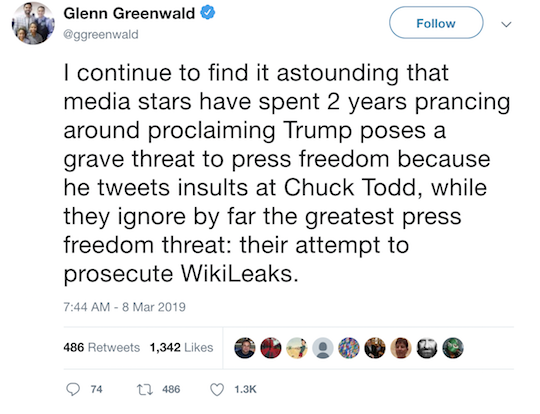 With time change upon us again this weekend, we got to wondering where things stood with the standard-time movement in California.

At this time in 2016, we took note of a nascent effort to scrap daylight saving time in the Golden State. “I heard some complaints last year from some of the senior citizens [in my district] and their care providers, who say this one-hour difference really impacted their lives,” said Assemblyman Kansen Chu (D-San Jose).

He did a little research into the economic effects and found what we did earlier this decade: Daylight time does not help save energy. What’s more, the shift is correlated with an increase in workplace accidents, to say nothing of heart attacks.

Well, to be precise, they authorized the legislature to pass a law switching to year-round standard time. Chu and a bipartisan group of fellow lawmakers have introduced a bill doing just that.

But it has a steep climb. The bill needs a two-thirds majority for passage and approval from Washington, D.C.

Still, California is a trendsetter — both good and bad. This is one trend we hope catches on. Don’t know about you, but the spring time change especially is rougher and rougher on your editor as the years progress. I’m sleeping in and skipping my workout Sunday…

“Now that I am all warm and fuzzy inside from the opening tick-tock of Thursday’s 5,” a reader writes, “I am reaching for a good stiff shot to figure out if I shouldn’t instead wait for capitulation to set in to enhance my outcome.

“Not really sure at this point that considerations of the advance-decline plot of the S&P 500 alone can tell me more than whatever is going to happen will likely be on a broad scale. So I decided to review the key point that was presented.

“’Key point: The net number of stocks that are advancing across the broad market has broken through to all-time highs.’

“’The S&P, Nasdaq and other indexes, however, have yet to reach new highs,’ Mike says. ‘This tells me there are plenty more rank-and-file stocks that could move to new highs.’

“Now, that is warm and fuzzy… too fuzzy to my way of thinking; especially since the S&P plot has not broken through its similar level of resistance. And neither has momentum, which assigns a bit more than just a +1 or -1 to the count of ups and downs.

“Until that happens, I remain a bit more interested in how large the rank and file to choose from will be after capitulation has set in.”

One main reason is that many companies are entering the “buyback blackout window” — the period a few weeks before they report earnings when they can’t repurchase their own shares. Buybacks have been a major driver — some would say the driver — of stock market strength these last five years or so.

Meanwhile, if you’re determined to have a more bearish mindset right now, a word of caution:

We recall many a pundit declaring capitulation was at hand during gold’s sickening slide from 2011–13. Here, we resisted making that sort of call… and by early 2013 we’d made our peace that gold had entered a bear market. Just saying…

Feels like something’s afoot here. Could a century of nonsense be nearly over? And would you welcome it?