Next Monday, Apple will take a leap into the unknown — setting out its future course in a world that reached “peak iPhone” months if not years ago.

As usual, there will be a dog-and-pony show featuring CEO Tim Cook at company headquarters in Cupertino, California.

But instead of a jaw-dropping new product, Cook will likely announce the launch of a streaming video platform. That’s certainly what’s implied by the invitation: Note “show time” instead of “showtime”… 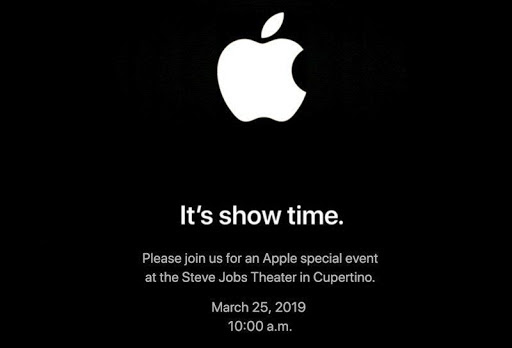 Given Apple’s history, this is evolutionary stuff — not revolutionary.

But as our Zach Scheidt has been saying for more than three years, Apple’s days as a go-go growth company are over. It’s a mature, dividend-paying stalwart.

That’s why in recent months Apple has sought to play down its iPhone numbers and play up the “services” realm — Apple Music, Apple Pay and so on.

Services will never deliver the sort of to-the-sky growth that came with the iPod and iPhone… but they do furnish a steady monthly stream of subscription revenue. Wall Street likes that, and the cash flow readily supports the dividend.

And so it goes with this video-streaming venture. According to Silicon Valley’s newspaper of record, the San Jose Mercury News, “The company is believed to be preparing to debut a streaming TV service of its own that may include the reselling of other premium subscription channels such as Showtime, HBO and CBS All Access.”

Wait a minute, no Netflix?

Netflix CEO Reed Hastings confirmed Monday that his company’s offerings won’t be integrated with whatever Apple has in the works.

“Netflix is known for having what might be called a love-hate relationship with Apple,” says The Mercury News by way of background. “While Netflix’s app is consistently one of the most-downloaded on Apple’s App Store, Apple no longer sells Netflix subscriptions via the app. Netflix has said on occasion that Apple was not a major source of its subscription revenue.”

Instead, it appears Apple is setting itself up to take on Netflix — including the production of original films and series.

“At next week’s presentation,” says The New York Times, “Apple is expected to reveal details of what it has been working on with stars from both sides of the camera like Reese Witherspoon, Jennifer Aniston, Brie Larson, Jason Momoa, Octavia Spencer, J.J. Abrams, M. Night Shyamalan and Steven Spielberg.”

Nor are we talking “vaporware,” if we may borrow from computer terminology: Five series are already shot and in the can, with another half-dozen close behind. Apple is all-in.

At the risk of belaboring the obvious, Apple is entering a market where the competition is somewhere between “fierce” and “off-the-charts intense.” There’s not only Netflix, but also Hulu, Amazon Prime Video and a new Disney service later this year.

In going Hollywood, Apple lacks a “moat” — to use one of Apple investor Warren Buffett’s favorite analogies.

That is, Apple has no obvious competitive advantage in video entertainment, much less an advantage that’s insurmountable to any wannabe competitors.

Furthermore, the NYTimes story cites “more than a dozen people who have had dealings with Apple” as expressing “concerns” about Apple’s ambitions.

“Those concerns have arisen from the culture clash that may inevitably come about when a tech company that is used to guarding its trade secrets gets involved in show business, which runs on a stream of conversation, much of it of the just-between-us variety.”

Maybe that sounds crazy on the surface. But we’ve kicked it around as a thought experiment in The 5 as long ago as July 2017… and the case has only become more compelling since then.

Netflix’s subscriber count at year-end 2018 was 139.3 million worldwide, 58.5 million of those in the United States. Compare that with Hulu’s mere 25 million. (Amazon doesn’t disclose figures for Prime Video.)

The U.S. market might be maxed out, but the global growth is still stunning: At the time of our July 2017 write-up, Netflix had just crossed a critical threshold, with 50.1% of its business coming from overseas. Eighteen months later, that was up to 58%. Impressive.

And then there’s Apple’s still-enormous cash pile, sitting around without much

Apple’s cash reserves as of year-end 2018 totaled $285.1 billion, a record — helped in part by the big corporate tax cut.

When those numbers were disclosed, CNBC reported, “Wall Street has speculated that the lower tax rates may open the door for the tech giant to bring back cash from overseas and put it to work through acquisitions or by returning money to shareholders.”

Other media outlets are joining the Apple-buying-Netflix party we started in mid-2017. “Apple should buy Netflix,” says Barron’s. CNBC even puts a target price on an Apple buyout of Netflix — $189 billion.

This possibility is no longer idle media chatter. Our Zach Scheidt’s proprietary indicator is pointing toward Apple buying Netflix sooner rather than later.

In the end, federal regulators nixed that deal… but it didn’t matter to readers who acted on that indicator’s short-term guidance. Twelve days after the indicator gave the green light for a trade, the deal was announced… and the payouts were enormous. We heard from grateful readers who pulled in gains of $3,880… $9,000… even $39,500, depending on how they played it.

In the present case, sure, you could buy NFLX shares. But if you want to bring home the sort of payout that could cover the cost of round-trip tickets to Europe… or a year of college for your grandchild… well, there’s another way to play it.

Zach explains the opportunity before you at this link. There’s no long video to watch, but please know that because of the time-sensitive nature of the information, it comes offline in less than 36 hours.

To the markets, which are having a knee-jerk reaction to the latest trade war

The president told reporters this morning that U.S. tariffs on Chinese goods could stay in place for “a substantial period of time.”

Not helping matters is a gloomy quarterly report from FedEx — which says that “slowing international macroeconomic conditions and weaker global trade growth trends continue, as seen in the year-over-year decline in our FedEx Express international revenue.”

The Energy Department’s weekly oil inventory report shows U.S. stockpiles fell sharply from the previous week, and that’s sent oil pushing close to $60 a barrel for the first time in more than four months. Gold, meanwhile, clings to the $1,300 level.

And then there’s the Fed waiting game.

By the time you read this, the Federal Reserve will have issued its every-six-weeks “policy statement.”

Whatever they decide, and we’ll cover anything important tomorrow, here’s what you need to know today: The substance of whatever the Fed decides isn’t nearly as important as how it measures up to what Wall Street thinks the substance will be.

Especially now. No one expects the Fed to raise the fed funds rate today. “At the most,” says our investment banking veteran Nomi Prins, “we believe that when they release what they call a ‘dot plot’ of possible rate hikes, we’ll see one more this year.” That splits the difference between the Fed’s forecast in December for two increases and Wall Street’s expectations for none at all.

“The Fed’s key words are ‘patient’ and ‘gradual’ and some version of ‘watching the data,’” Nomi goes on. “What this means for you is to expect more words that suggest a wait-and-see approach.” More tomorrow…

Cannabis is now the fastest-growing job sector in the United States, if a new report is to be believed.

The cannabis website Leafly compiled the report with the consulting firm Whitney Economics. The conclusions…

Here’s the funny thing: The researchers had to compile their pot-industry figures from industry sources and state governments. The federal Bureau of Labor Statistics was no help: Because cannabis remains illegal at the federal level, it doesn’t report any cannabis industry employment figures. Yes, the BLS literally pretends those jobs don’t exist!

“Guenthner is still trying to read something into the price chart for gold, still looking for breakouts — yikes,” a reader complains. (It’s not the first time.)

“How long will it take before you folks understand/acknowledge that gold is a rigged market and chart reading of a rigged market is not only pointless — except for maybe short-term moves — but it’s outright deceptive. They’re playing you, pure and simple.

“Given the market rig by JPM et al., you have to do the opposite of what the charts would lead you to do. You have to sell the upside breakouts and buy the downside.

“It’s why he’s made so many bad calls in the period between the bearish call you chronicle and now. He gets faked out every single time. Slow learner? Or is it that it’s more important to you folks to maintain the fantasy that your chart reading — which a trained chimp can do — is the secret to golden riches?

“Really makes you [seem] pretty venal to those who really know the score.”

The 5: If you’re going to make the case that market manipulation invalidates trend following or other forms of technical analysis, you shouldn’t limit yourself to gold.

Crude oil might be subject to even more manipulations than gold, going back the launch of modern-day crude futures in 1983. There may be as many as 100 “paper barrels” of oil trading for each barrel of the real thing — a ratio similar to the “paper ounces” of gold, it turns out.

This morning brought an allegation from the well-respected King Report — authored by the veteran Chicago-area broker Bill King. “Once again someone juiced E-Mini S&P index futures (ESMs) during early European trading Tuesday. The manipulation of ESMs during the wee hours in the U.S. creates the psychology that induces other traders, particularly the momentum investors, to get long for the coming session.

“There is a long pattern going back to the 1990s of overnight manipulation of S&P 500 futures to arrest negative sentiment and create a cycle of equity buying that spreads from Europe to the U.S.”

But do all of these shenanigans make chart analysis worthless? We’re not ready to throw out the baby with the bathwater.

Circling back to gold, we can’t help repeating the words of the inimitable Marc Faber — which we cite from time to time and even turned into a meme… 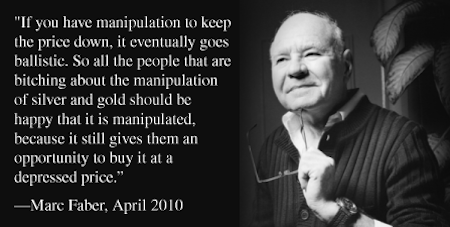 P.S. “Apple Needs to Buy a Hollywood Studio to Compete With Netflix and Amazon,” says a recent headline from the tech-oriented website CCN.

Meh — why not just buy Netflix?

Here’s one of our leading analysts’ case for such an acquisition… along with the most profitable way to play it.