Streaming service Netflix is a combat zone — financial wonks love to pick sides when it comes to the company’s life expectancy.

On one side of the debate, you have the rah-rah crowd who point to Netflix’s glossy content with A-list talent, the platform’s expanding file of subscribers and its corner on the market in a space where more and more consumers are breaking up with traditional TV. 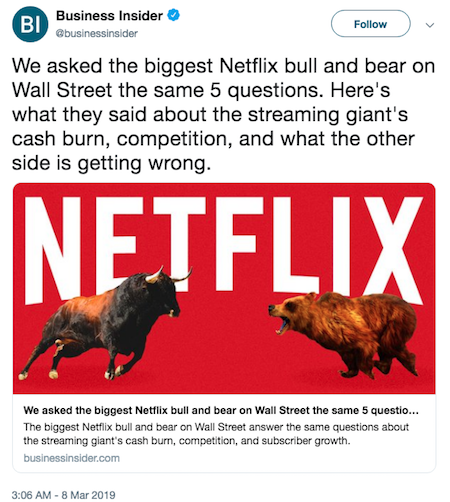 On the other side, you have dissenters — admittedly smaller in number — who say Netflix shares are drastically overvalued, the company’s notorious cash-burn rate is untenable and it’s facing fierce competition in the red-hot subscription streaming market.

One such heretic is Morningstar analyst Neil Macker, someone Markets Insider calls “Wall Street’s biggest bear on the streaming giant.”

Macker’s so bearish on Netflix, in fact, he believes a share price of $135 more accurately reflects the company’s value… bearish, indeed. (*Gulp* NFLX closed at $375.22 yesterday.)

Macker says: “[I] don’t believe that Netflix’s current share price considers the potential changes to consumer behavior that a combination of higher prices and increased competition could create to the detriment of Netflix’s business.”

As we discussed yesterday, “increased competition” comes from YouTube, Amazon Prime, Hulu Plus (no ads), HBO Now, Disney+ and — most recently — Apple.

Just how concerned should Netflix be about Apple elbowing into the content-streaming biz?

“I think Apple could be a strong competitor,” says Macker, “but right now, absent any changes in their motivation and their willingness to spend, we don’t see this as a near-term competitive threat.”

But Apple’s hardly the only game in town — there’s competition from all sides for your eyeballs: “Nowadays, there are just more and more choices of what we can put on… screen,” Macker says, “whether it’s on the TV, at a movie theater, on our cellphone, on our tablet or on our computer.

“Netflix and everybody else in the media space and video game space, and Facebook, YouTube, all these guys, are all competing for that screen time.”

For the record, Netflix reported at the end of 2018 a negative free cash flow of $1.3 billion and anticipated burning through $3 billion more in 2019.

“I think that’s a concern generally with the company,” Macker says. Putting it mildly…

“While the company is talking about an inflection in 2020,” he continues, “we’ve heard similar stories in the past about changes in behavior….

“One of the keys to Netflix’s success has been the ability to add new content and keep that content machine going,” says Macker.

We’re thinking a “content machine” requires a cash machine; barring that, maxing out the credit cards.

“[Netflix is] going to continue to need to spend… and their ability to get leverage on that is one of the things that we think a lot of bulls on the name are overestimating.”

To wit, we take a look back at Netflix’s “accounting magic”… something on the radar at The 5 for about a year now.

In April 2018, we noted gossip site Crazy Days and Nights where the Hollywood set can spill the tea (anonymously) on the comings and goings in Tinseltown. Dishy? Sure… but the site, for example, was onto the Harvey Weinstein scandal way before the mainstream media picked it up.

At any rate, an anonymous post on the website mentioned “an almost-TV network” operating under a shifty “scheme” that rivals some dot-com-era flops: “Doesn’t matter how much you have to pay. Trust us, the financials will work out very nicely in the future.”

The post continues: “Buy up as much talent in town as quickly as possible and it’ll all pay off later… Because we will simply chase everyone else out of the game.

“Just give us a lot of money so we can make sure that everyone else will go bust — before we do.”

All well and good (not really… but for our discussion, whatevs) until Netflix comes up against a rival with colossal cash reserves. Yesterday we noted Apple’s cash pile as of year-end 2018 totaled $285.1 billion… that’s a lotta dough twiddling its thumbs, so to speak.

How to put that cash to work — that’s the question Apple has to answer… especially for shareholders. If the answer Apple’s landed on is rivaling Netflix with its own streaming service — oh, and building everything from the ground up — best of luck.

Netflix has already cracked the code when it comes to producing films and series — something Apple hasn’t proven yet. At the same time, Apple has something Netflix needs to keep the “content machine” churning — plenty of cash.

It’s a tantalizing prospect — Apple buying Netflix — something we’ve kicked around for a couple years now.

Of course, we’re not the only ones…

“If this occurs like I believe it will,” says our income specialist Zach Scheidt, “the minute the potential Netflix buyout is officially announced…

“Shares will explode… and you’ll have missed the boat.

“But if you’re looking for a real payday,” Zach says, “the type of ‘bonus’ payday Wall Street brokers crave…

“Where you could grow your net worth overnight…

“There’s a special way to play Netflix that could turn a small $500 stake,” he says, “into thousands of dollars… (or more!)”

Zach explains the opportunity at this link. There’s no long video to watch, but please know that because of the time-sensitive nature of this information, it comes offline at MIDNIGHT today.

To the markets: For U.S. stocks, it’s as if yesterday’s Fed meeting never happened.

Treasury yields continue to tumble, the 10-year now 2.53%. Gold is holding on to most of yesterday’s post-meeting gains at $1,310. Crude, which crossed $60 yesterday, remains there today. Bitcoin is falling and clings for dear life to the $4,000 handle.

The Fed is hoping, praying it can pull off something it’s done only once since World War II. Or so it seems after yesterday’s meeting.

The committee members stood pat on the fed funds rate. That was no surprise.

The committee members announced they’d wind down “quantitative tightening” — the sales of the Treasuries and mortgage-backed securities on the Fed balance sheet — by September. That wasn’t much of a surprise.

What was a surprise was the so-called “dot plot” — in which the committee members guess at where they’ll set the fed funds rate in the future based on their guesses at what will happen in the economy. (If that sounds a little ridiculous, it’s not your imagination.)

The previous dot plot in December pointed to two increases in the fed funds rate during 2019. The new one issued yesterday points to zero.

In other words, the rate-raising cycle that began haltingly in December 2015 and picked up pace last year — much to Donald Trump’s consternation — is now over.

There’ve been a dozen or so rate-raising cycles since the end of World War II. In every instance but one, the Fed went too far and threw the economy into recession. The one exception, the one time we got a “soft landing,” came in 1994.

Perhaps with that 1994 episode in mind, Fed chairman Jerome Powell stepped before the cameras and said yesterday, “It may be some time before the outlook for jobs and inflation calls clearly for a change in [interest rate] policy.”

To underscore that point, he trotted out the word “patient” even more than he did in his last press conference six weeks earlier… 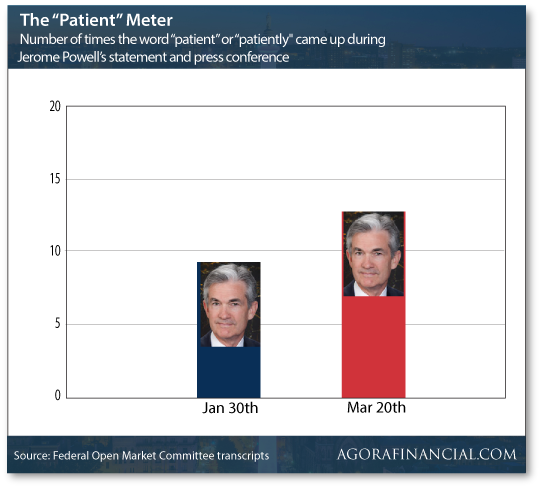 But here’s the rub: Monetary policy is still getting tighter, thanks to the continuance of “quantitative tightening” for six more months. QT has the same effect as raising interest rates. So the cycle isn’t really over.

What’s more, monetary policy always has a delayed impact. It “acts with a lag,” as Jim Rickards is fond of saying. So the impact of all those interest rate increases last year is still working its way through the system.

The Fed might be able to navigate its way out of the recessionary woods. But they’re not there yet. And history isn’t on their side.

“Lyft Inc. (soon-to-be ticker: NASDAQ: LYFT) is off and running on its roadshow for its impending IPO,” says Agora analyst Greg Guenthner.

The IPO price is anticipated at $62–68 per share. A little rich?

“Since Lyft is beating Uber to the public markets,” says Greg, “I’m guessing this new stock could attract some serious attention when it finally debuts on the Nasdaq.

“In fact, the stock has already earned a buy rating — and it hasn’t even hit the market.” Now that’s rich… 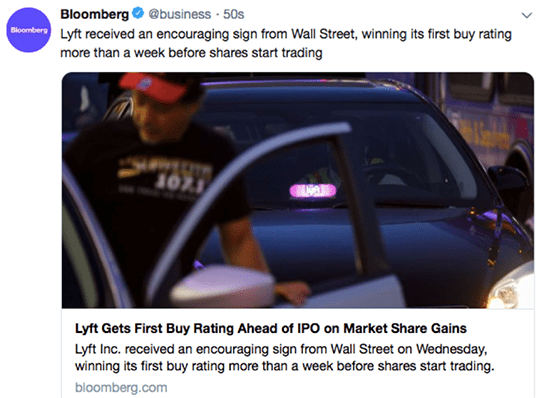 “While I’m not sold on Lyft or Uber as viable, long-term successes, Lyft is a household name that could turn into a very lucrative trading vehicle,” Greg says. “The stock is certainly worth a watch when it debuts on the Nasdaq late next week.”

“One of the U.K.’s major toilet tissue importers has been stockpiling to ensure it can maintain supplies in the event of a no-deal Brexit,” the BBC says.

The 5’s kept up with the ruckus Brexit’s caused in import/export supply chains.

First, we noted the “Brexit” box concerned Britons were stowing away under kitchen tables, filled with gourmet items like, say, a favorite marmalade from France.

Then the Brexit box morphed into the Brexit BOX… a 30-day supply of MREs like “chicken mince” (*wincing*) and water-purifying tablets.

Then we reported on government officials warning Britons against stockpiling medications — insulin, for instance — even though the U.K. has no facility that manufactures the lifesaving injectable.

The U.K. imports almost all of its “loo” paper, something former British Labour Party politician Denis MacShane wrote about in October 2018. “Each Brit consumes 110 toilet rolls a year — 2½ times the European average,” he said at The American Prospect. He went on to say, at the time, there was only enough toilet paper stockpiled to last Britons for one day.

Will it be enough if supply chains are royally mucked up by a Brexit no-deal? Will it come to Britons using — as MacShane said — “torn-up newspapers as in bygone days”?

A bum deal, if you ask us… and by the way, who reads newspapers anymore?

P.S. THE END OF TELEVISION?

The television industry could go through a MASSIVE change starting as soon as TODAY, March 21.

Here are three ways to prepare for it…

And collect a potential retirement FORTUNE.