“If young people can’t afford to marry and start a family, then the American dream literally has no future. Unfortunately, the cost of family formation and child-rearing today is higher than ever.”

Over a long career, Beau has helped thousands of everyday Americans plan for retirement — as a financial adviser, syndicated radio host and best-selling author.

As a member of our team, he’ll be able to reach even more people just like you — and give you a heads-up on Washington schemes like this one…

“The bill under consideration dangles cash benefits in front of new parents,” Beau tells us. “But taking that money sets American workers up for problems down the road.”

Given Washington’s penchant for acronyms, Ernst and Lee have dubbed their bill the Child Rearing and Development Leave Empowerment Act — or CRADLE Act. 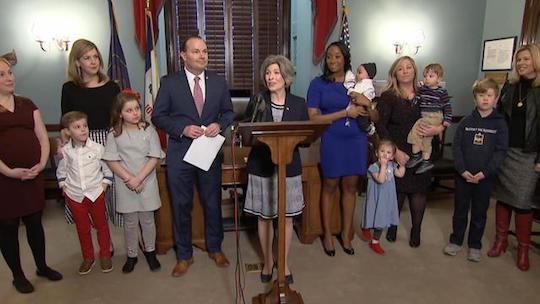 Lee and Ernst introducing the bill at a photo op, surrounded by frazzled congressional aides who had to drag their kids to work for a day smiling moms and kids.

Per the senators’ article, the bill “would allow new parents to receive one, two or three months of paid leave… after the birth or adoption” of a child.

But unlike many “paid family leave” proposals, the senators promise their bill won’t add a penny to the national debt.

So what’s the catch, you wonder?

“The bill gives parents the option of receiving some of their Social Security benefits early to cover the costs of leaving work to care for a new child,” says Beau.

“For every month parents receive this early benefit, they need to delay their retirement by two months,” Beau explains. “In other words, if you elect to receive three months of this maternity/paternity benefit, you won’t be eligible for retirement benefits until six months past when you’d ordinarily be able to get them.

“If you have three kids and accept three months of early payments for each, you’ll have to wait an extra 18 months to retire.

“In my professional opinion, that is a very bad deal,” says Beau.

We can see how it would be tempting for a young or middle-age couple with a newborn to “take the money and run” — especially if your assumption is that Social Security won’t be there once you reach retirement age.

But as we said last week, there’s nothing so wrong with Social Security’s finances that some combination of higher taxes and a higher retirement age couldn’t fix. Social Security probably will be there in one form or another decades from now. (Medicare, on the other hand, is totally screwed — but that’s a subject for another day.)

There are millions of older Gen Xers who figured when they were in their 20s and 30s that they’d never collect a dime of Social Security and their FICA taxes were just money poured down the rathole. Now they’re only 15 or 20 years away from retirement and realizing they probably will collect benefits, even if they’re not as lavish as once advertised.

In other words, the continued existence of Social Security is predictable — more predictable, frankly, than your own life circumstances.

Says Beau, “All it takes is one unexpected event, like a forced early retirement, to throw your plans into a tailspin.

“Right now you may be planning to work right up until your full retirement age. But your work life could still end prematurely — due to poor health, disability or job loss or even to care for a spouse or other family member.

“Any one of those events could decimate your retirement plans — costing you years of income that you were counting on for your golden years.”

Chew on the following numbers, courtesy of the Employee Benefit Research Institute.

Among people currently in the workforce…

And only about a third of those who retired before 60 did so by choice: The rest were confronted by health issues or a “company reorganization.”

One more stat Beau wants you to consider: “According to the Federal Reserve’s most recent Survey of Household Economics and Decisionmaking, the average retirement age in the United States among living retirees is 59.88.

“Right now people who retire at 59.88 years old have to wait over two years to collect any money from Social Security. With the CRADLE Act, that wait time could increase two–six months for every child they have.”

Beau’s bottom line: “If the CRADLE Act becomes law, do not consider the government’s offer of ‘paid’ leave as a gift. That money is coming out of your financial future. So consider the long-term consequences of delaying your retirement before applying for the check.”

[Ed. note: Did you know Americans have left billions of dollars in unclaimed Social Security benefits on the table?

Don’t be one of them. Follow Beau’s strategies and you could add tens or even hundreds of thousands of dollars to your lifetime Social Security benefits. He tells us about a couple from Nebraska who acted in the nick of time — and wound up with the potential for an extra $231,629.

Beau is eager to clue you in to all these strategies in the new “Retirement Box” he’s created. Click here and learn how to claim your box, FREE. (Supplies are limited.)]

The safety trade is on as the week winds down, a move the mainstream attributes to [spins the wheel] “global growth concerns.”

Manufacturing data from Europe came in way weaker than expected today… and a reading on U.S. manufacturing registered a 21-month low.

But the real action is in the bond market, where something just happened for the first time since [cue scary music] 2007.

This morning, you can lend your money to Uncle Sam for three months… and you’ll collect a slightly higher interest rate than you would if you lent for 10 years. Thus the line on this chart dipping slightly below zero. That’s not normal. 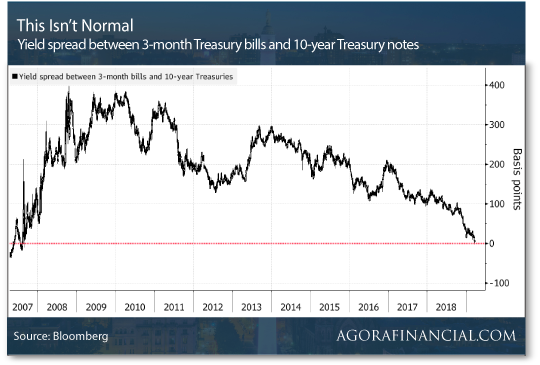 The way the bond market usually works is you collect a higher interest rate by lending over a longer stretch of time. In theory the risk of default is higher the longer the borrower has your money.

Don’t get the wrong idea. The federal government is not in danger of defaulting. But an inverted yield curve is a fairly reliable indicator of an approaching recession. And it lines up nicely this morning with the aforementioned poor manufacturing numbers.

Gold can scarcely be bothered with these new developments: The bid is steady-Eddie this morning at $1,312.

Took long enough, but the president finally threw a cat among the pigeons at the Federal Reserve. Too bad it’s a fat and happy house cat that won’t intimidate the pigeons for a minute.

As we’ve carped from time to time, Donald Trump had the rare opportunity to fill five of the seven positions on the Fed’s board of governors.

We weren’t expecting him to appoint a perceptive Fed critic like Jim Grant of Grant’s Interest Rate Observer (even if hope sprang eternal). But neither were we expecting him to fill most of the slots with egghead academics and career Fed apparatchiks — which is exactly what he’s done.

This morning brings word the one remaining slot will be filled by Stephen Moore of the Heritage Foundation.

Moore is in line with Trump’s thinking. In a radio interview three months ago, he said the Fed was “wrecking our economy” with its interest rate increases and debt sales. Nor is Moore worried about inflation because “there’s such a demand” for the U.S. dollar.

*Sigh* So he’s a mad money printer — a conservative fun-house mirror image of all the liberals latching onto “Modern Monetary Theory” these days. More in the weeks and months to come…

(We realize we haven’t weighed in yet on MMT, but that’s only because we haven’t had anything to say about it that you couldn’t read anywhere else.)

From Washington, word of what could be a huge new catalyst for legal cannabis.

Reports our penny pot stock authority Ray Blanco: “The SAFE Banking Act is scheduled for markup in the House Financial Services Committee next Tuesday. The bill would clear the way at a federal level for financial institutions to work with cannabis businesses.”

By and large, pot remains an all-cash business because federally regulated banks want nothing to do with the plant. The bill would give banks the all-clear.

“Banking continues to be one of the biggest barriers to growth in the legal cannabis space. Opening up the mainstream financial system to marijuana companies would open massive new opportunities for cannabis investors.”

Of course, opportunity abounds already: Only yesterday, Ray urged his premium subscribers to sell half their position in one of his picks — good for 140% gains in less than six weeks.

Want more where that came from? Look here.

Or so we’d glean from a new survey by the personal-finance website Finder. It concludes Americans spent $39.4 billion in the last 12 months on spontaneous drunken purchases — up 29.6% from the previous year.

The good news is that the number of people who fessed up to a purchase while plotzed is declining — from 46% last year to 26% this year.

Hmmm… That sort of variance makes us wonder if we’re looking at a mighty limited data set here.

In any event, the average annual spend among people who acknowledged besotted buying was $736.

In any event, food is the most common drunk purchase — cited by 52% of drunk shoppers. That’s followed by clothing and shoes at 43% and cigarettes at 30%. Draw your own conclusions.

“Dave, you are absolutely correct,” writes one of our regulars: “Gold is not the only rigged market, and manipulation does not invalidate trend following or other forms of technical analysis.

“Stock markets are rigged too. So are bond markets, commodity markets, currency markets and interest rates — as well as fiscal/monetary policies. Nothing in finance is pristine. Chart watchers simply propose that useful information is conveyed in price action and other ‘technical’ indicators. These don’t substitute for ‘fundamental’ data, but instead complement them.

“Precious metals markets are relatively small compared with other assets. So a modest influx of money can move the needle significantly, especially when gaming them via futures/paper trades.

“The current suppression of gold and silver prices is a gift that keeps on giving (for now anyway). I fear it won’t be long before they go ballistic, and many folks will have missed the buying opportunity.”

P.S. Did you know you can add only “five words” to your Social Security application form and collect up to an additional $1,000 every month?

That’s just one of the secrets you’ll learn when you open up the “Retirement Box” we’re ready to ship to your door, FREE.

You can also learn about a little-known “loophole” with which to legally collect a portion of your benefits before you retire.

You can claim your free “Retirement Box” at this link. (There’s no long video to watch.)