Mueller vs. the Economy

Hey, we hear you can get DEEP discounts today on Robert Mueller vigil candles…

No, that’s not something our art department photoshopped for us this morning. That’s actual merchandise that actual Americans bought with actual money. (Well, Uncle Sam’s phony-baloney fiat money, but you get the idea.)

For reasons that utterly escape us, there was a sizeable portion of the American body politic the last couple of years whose hopes and dreams for the republic were riding on Mueller’s shoulders. To wit… 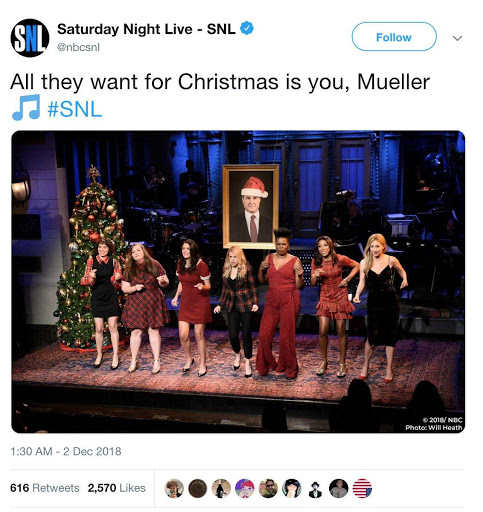 But no more. As you’re surely aware, Mueller has delivered his final report. And while we wait for the nitty-gritty to be made public, we know for certain that no Americans have been indicted for colluding with Russians to swing the 2016 election. The Russkies came up with those fiendishly persuasive Facebook memes all on their own! 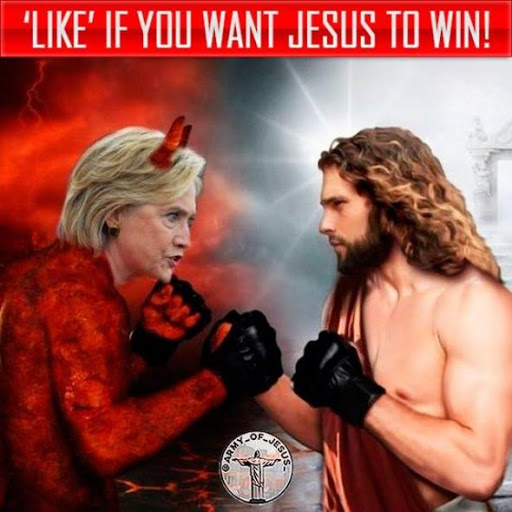 Whelp, so much for a two-year drumbeat from the establishment media about how “the walls are closing in.”

We bring up the subject this morning because…

At day’s end on Friday, the major U.S. stock indexes notched their worst day of the year — a drop largely attributed to those “global growth concerns.”

It’s true there were lousy manufacturing numbers in both the U.S. and Europe… but the big driver was the emergence of an “inverted yield curve.” That is, yields on 3-month Treasury bills were higher than yields on 10-year Treasury notes.

That’s an abnormal circumstance — and almost always the prelude to a recession. 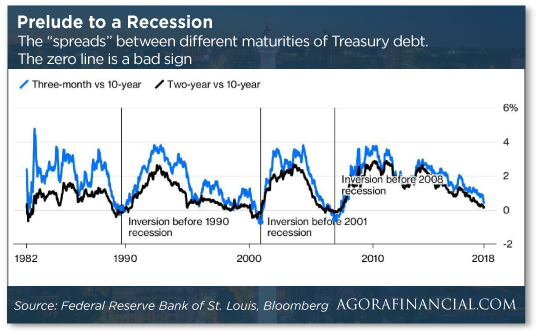 Still, as we noted Friday, there’s a lag between the time the yield curve inverts and the time a recession sets in. Going back the last 50 years, the average lag is a little over 10 months.

But that’s just an average. Wouldn’t it be nice if there were a more precise indicator?

As it happens, there is a more precise indicator — and it was just updated this morning. The upshot? No recession yet… 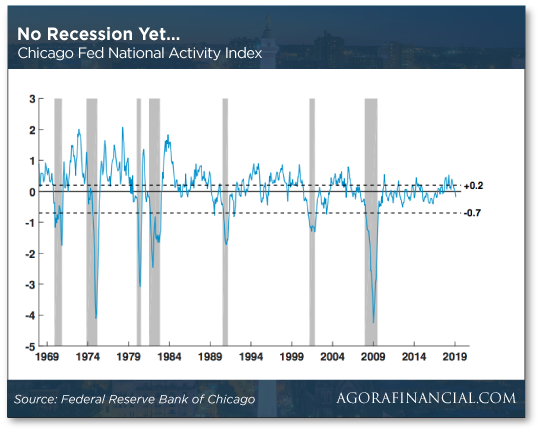 The Chicago Fed National Activity Index crunches 85 economic numbers to generate a single composite. It has a nearly flawless record of calling recessions going back 50 years. (It was late with the 1973 “oil shock.”)

The key number to watch is when the index’s three-month moving average falls to minus 0.7 or lower. That level usually coincides with the start of a recession. (Recessions are represented by gray bars on the chart.)

The number this morning is minus 0.18. It’s nowhere near the danger zone, but it’s also the weakest since 2016.

All last year, we were saying the U.S. economy is in the late boom phase of the boom-bust cycle. This year it’s evident we’re closer to the end than the beginning of that phase.

By way of purely anecdotal evidence to support our thesis, we see several Las Vegas resorts are cutting their fees.

The paper reports that both Wynn Las Vegas and The Cosmopolitan have canceled parking fees for overnight guests. Meanwhile, SLS, Golden Nugget and Red Rock are offering special deals on rooms without resort fees.

“A resort fee,” explains the Las Vegas Review-Journal, “is a mandatory fee that an overnight guest must pay for additional services provided by the property — such as Wi-Fi, pool and gym access — regardless of whether the guest actually uses them.”

Turns out tourism to Vegas in 2018 was the weakest since 2014 — which doesn’t exactly speak to a robust economy, does it?

For the moment at least, MGM and Caesars are still holding out and charging their usual fees.

As the day wears on, the Dow and the S&P 500 have inched into positive territory… but the Nasdaq and the small-cap Russell 2000 remain in the red.

“The Russell took a beating Friday, closing lower by more than 3.6% (no, that’s not a typo),” says our chart hound Greg Guenthner. “The small-cap index knifed through its 50-day moving average to close at new six-week lows.

“One day does not a new trend make. But sellers were loud and clear as they dumped smaller, riskier stocks to close out the trading week.”

It was small caps that were first to turn lower during the big market sell-off last fall. Now? “Despite the Russell’s impressive rally off its December lows,” Greg tells us, “small caps have failed to keep up with the major averages this month. 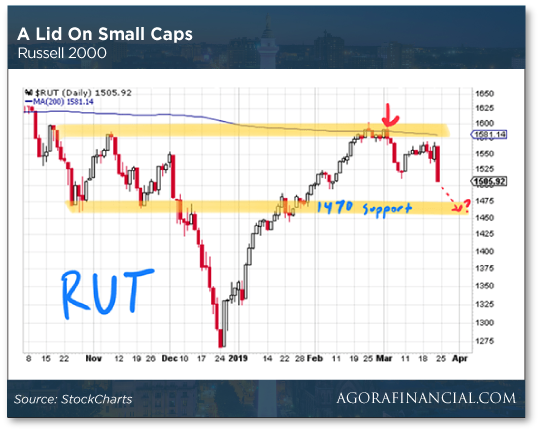 “It’s not surprising to see the Russell retreat from the same levels that saw sellers step in late last year. If it continues to retreat from these levels, we should look for support near 1,470.”

Meanwhile, the safety trade remains in play — with long-term Treasuries and gold both rallying.

Biotechs of all sizes took a punch when the large-cap player Biogen revealed it whiffed on its attempt at an Alzheimer’s drug. In a day, the company lost about a third of its market cap.

Ray had recommended BIIB in Technology Profits Confidential… but he cut it loose last month, well before the announcement and the big drop. That’s because Roche had swung and missed with a similar Alzheimer’s drug. Ray wasn’t about to take any chances.

“Roche’s failure made me question the entire mainstream theory of Alzheimer’s disease,” Ray says. Really, Ray’s been questioning the “amyloid plaque” theory for years — the idea that junk pieces of protein contribute to Alzheimer’s the same way plaque clogs up your arteries — but Roche was the final straw.

Back to the small-cap space: “We could see small-cap biotechs make all-time highs this year,” Ray asserts.

“It’s my belief that changes at the FDA are increasingly stacking the deck in favor of innovative small biotechs while kicking the legs out from under some of the bigger companies.

“But at the same time, the FDA has bent over backward to work with companies developing new, innovative and sorely needed therapies. We haven’t just seen record generic approvals over the past couple of years — we’ve seen record approvals for novel drugs, too.

“That means 2019 is setting up to be a banner year for smaller biotech companies, which outperform not just Big Pharmas, but the market in general. Furthermore, many of the best of these smaller names could be bought out just based on the potential of their pipelines and technology.”

Time for some catching up in the mailbag, and an item we got after noting that Army whistleblower Chelsea Manning is back in jail for refusing to testify against WikiLeaks. (It’s 17 days and counting.)

“You call it press freedom when groups like WikiLeaks put classified stuff all over the internet. But then we marvel and can’t possibly understand how our operations against our enemies go wrong and American lives are lost.

“Yes, Virginia, there is a connection. And it’s not recent either. One example comes to us from the French in 1917. Some brainless general in the French army gave an interview to his country’s press prior to an upcoming offensive against the Germans during the First World War. He went into great and extensive detail about what the offensive was gonna look like and what it was going to accomplish.

“It never occurred to the general that maybe the Germans could also read French. Of course they did and to the surprise of no one but the general involved the offensive was a flat and bloody failure. The failure was so widespread and complete it triggered a mutiny big enough for The Guinness Book of World Records. Fifty-six divisions refused to follow orders and go over the top for any future attacks. That’s 650,000 soldiers who went from ‘Miracle of the Marne’ to ‘they shall not pass’ (at Verdun) to enough is enough!

“We almost had a similar disaster in the Pacific in 1942. Shortly after the Battle of the Coral Sea some reporter found out that we’d been able to read the Japanese codes before the battle and used that information to fight them to a draw. He thought that was something worthy of a story on the front page and it almost got there. We were fortunate NOT to suffer that kind of damage.

“Had that been the case the Japanese would have changed all their codes in a heartbeat. We would have been clueless about their plans for a little island called Midway. And it would have been one more huge defeat in the Pacific for us because Midway’s nearest defenders would have been 3,000 miles away had we not been able to read Japanese codes before the fact.

“Information is classified (especially in time of war) for a good reason. It saves lives. How wonderful it would be if the American press ever and finally figured that out.

“You’ve got some good stuff here. Keep up the good work.”

The 5: A Pentagon review of the secrets spilled by Manning and published by WikiLeaks found that no one was killed by enemy forces as a result. “I don’t have a specific example,” said Brig. Gen. Robert Carr, who led the investigation.

Indeed, none of the material disclosed by Manning was even classified Top Secret — in contrast with, say, the material Gen. David Petraeus shared with his mistress while she was writing his biography. Petraeus did no time, while Manning did seven years before Barack Obama commuted her 35-year sentence.

As for your point about information being classified for a reason “especially in time of war”… well, the Founders’ vision for the country was that wartime would be a rare thing. But as we’ve pointed out before, the United States has been in a permanent state of mobilization for war since passage of the National Security Act of 1947. And as James Madison said, “No nation could preserve its freedom in the midst of continual warfare.”

P.S. Our penny stock guru Tim Sykes recently revealed the secret about how he really made his millions.

That might be shocking enough, but get this: He did it in a private meeting with a group of everyday Americans.

Click here to see the secret revealed. You’ll want to do so before the market opens Wednesday morning, for reasons you’ll see when you follow the link.