A Long and Boring Financial Crisis

Finally, Brexit is getting exciting again: Tomorrow, if only for a day, British Prime Minister Theresa May will be effectively stripped of her powers and we’ll be treated to a parliamentary free-for-all.

Yesterday, Parliament voted 329-302 in favor of what the Reuters newswire calls a “highly unusual bid to find a way through the Brexit impasse after Prime Minister Theresa May’s EU divorce deal was rejected again.”

There’s been nothing quite like this in Parliament for the last century or so: Rather than wait on May to submit yet another Brexit proposal doomed to go down in flames, lawmakers will end run her tomorrow and take up what are called “indicative votes” on a range of Brexit options. The idea is that one of them might catch on and a majority of lawmakers can force May’s hand to go their way.

You know what, on second thought, Brexit is still a crashing bore.

Even British journalists are weary and cynical… 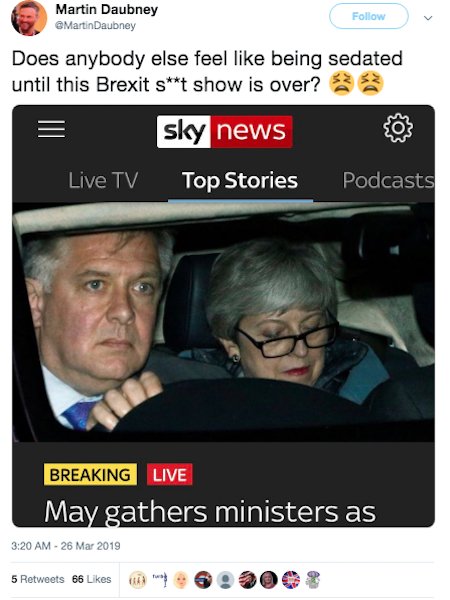 A few years ago, our fearless leader Addison Wiggin described the troubles in Greece and the other “PIGS” countries as “the world’s longest and most boring financial crisis.” Now it’s Brexit that holds the title.

Brexit was fun and exciting when it was going down in the summer of 2016. The referendum campaign was colorful. The majority vote in favor of leaving the European Union was a giant middle finger delivered to the powers that be. The outcome shook the U.K.’s political, financial and media establishment — putting them in full-on freakout mode.

Relative to the U.S. dollar, the British pound collapsed within hours from over $1.50 to below $1.33 — delivering a spectacularly successful trade in one of Jim Rickards’ premium services. Depending on how subscribers played it, they bagged 129% gains in three days.

But since the 2016 vote, Brexit has run aground over the details of how exactly the withdrawal should be executed.

We’ll spare you those details, lest we make matters even more boring than they already are. Suffice it to say that on March 29, 2017, London delivered formal notice to Brussels of its intention to leave the EU — starting a two-year clock to actually do the deed.

If you look at a calendar, you’ll notice that clock runs out only three days from now. The details still aren’t worked out. And because this is the world’s longest and most boring financial crisis, events are going into overtime.

As it stands today… if Parliament gets around to passing a Brexit agreement negotiated between London and Brussels, the EU has agreed to hold off the Brexit date till May 22. But if Parliament balks and passes nothing, then Brexit takes place with no legal framework (a so-called “hard Brexit”) on April 12.

“The biggest political problem in the negotiations,” says Jim Rickards, “is that the 2016 referendum offered two choices (‘leave’ and ‘remain’), but the political parties have argued over four choices.”

At the risk of making you glaze over further, those choices amount to…

None of these choices will resolve anything, Jim says.

“A hard Brexit could lead to financial and economic turmoil along with damage to the U.K. economy for years to come.

“A soft Brexit lacks support from the Euroskeptic hard-liners.

“The no-Brexit approach is viewed as a betrayal of those who voted to leave and could lead to demonstrations and civil unrest.

“The new referendum approach favored by globalists at the Financial Times and The Economist is also a betrayal and could shock the political class by producing another ‘leave’ majority, despite expectations to the contrary.

“Political differences aside, a four-way division means there is no majority for anything. Successive votes in the Parliament have resulted in one plan or the other being defeated, but no single plan gaining support. The U.K. Parliament members have been playing a gigantic game of chicken with the fate of one of the largest economies in the world hanging in the balance.”

And no amount of “indicative votes” tomorrow is likely to change that.

Result: The pound sterling “is set for a fall that will persist well beyond the date of Brexit itself,” says Jim — no matter what that date might be.

Against the dollar, the pound has traded up, down and all around in the past year — between $1.24–1.44. Here’s a snapshot of just the last three months… 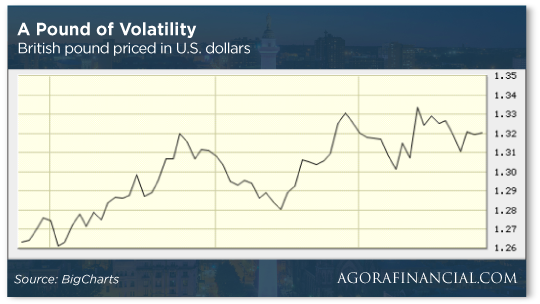 Jim describes it as “a roller coaster based on expectations of either a negotiated Brexit or a hard Brexit with occasional bouts of euphoria among some at the prospect of a new referendum.”

But now that the process is dragging on past Friday’s deadline, and no matter the outcome, “the prospects for the U.K. economy are decidedly negative. Either a hard Brexit or soft Brexit will damage the U.K.’s trading relations with the EU. The U.S. has recently announced its intention to renegotiate its own trading agreements with the U.K. in ways that can only lead to a reduction in U.K. exports to the U.S.”

Jim and his Project Prophesy team recently identified a way to play the trend for gains of up to 200% over the next six months. If events break just right, the gains could come even faster. Only yesterday Project Prophesy readers were urged to close out a trade for 103% gains in only three weeks.

To learn more about the methodology behind these trades — Jim first perfected it during his work with the CIA in the early 2000s — give this a look right away.

The proverbial “global growth concerns” are receding today and Wall Street has donned its rally caps.

Perhaps it’s a case of traders realizing Friday’s “inverted yield curve” — in which short-term Treasuries have a higher yield than long-term ones — does not mean INCOMING RECESSION!

“There is often a very long lag time before stocks and the economy roll over,” says our Mike Burnick — reinforcing a point made here yesterday and Friday. “Typically, 12–18 months, when stocks usually perform very well.

“That’s why I continue to expect a short-term consolidation/pullback for stock prices, not another repeat of the dismal December decline,” Mike goes on.

“History suggests that following such rapid reversals of fortunes for the market (a large drop in one quarter, followed by a pop the next), stocks go on to rally a median of 16% higher over the next nine months! And that bodes well for the rest of this year.”

Meanwhile, we got a couple of housing numbers today, both of which are screaming “late boom phase of the boom-bust cycle”…

Among the more amusing market movers in the last 24 hours is Nike. 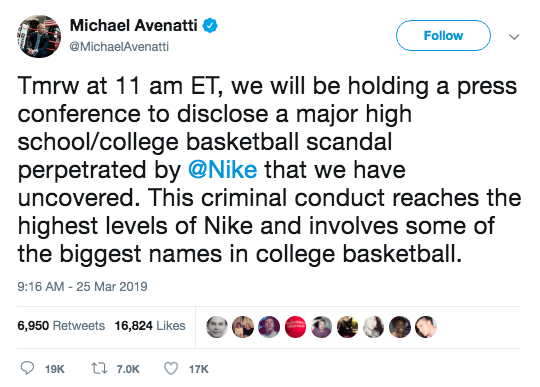 Barely a half hour after that tweet, the feds arrested Avenatti and charged him with trying to extort millions of dollars from Nike. It’s not hard to spot the timing of both the tweet and the arrest on this chart… 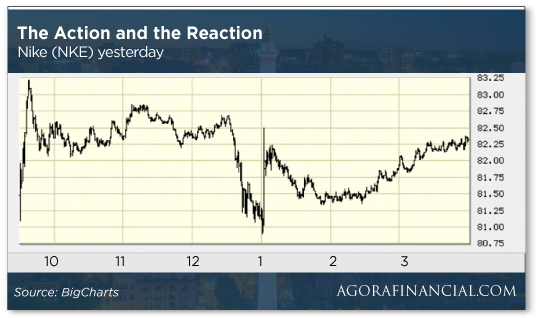 Nike execs immediately contacted the feds — who started recording subsequent phone calls in which Avenatti was, well, anything but subtle: “I’m not f***ing around with this… I’ll go take $10 billion off [Nike’s] market cap!”

Today’s press conference has been cancelled because Avenatti had an urgent personal matter to attend to. Heh…

“Yesterday was one small step for lemonade, today is one giant leap for young entrepreneurs,” says Texas state Rep. Matt Krause (R-Fort Worth).

Usually The 5 takes up the subject of heavy-handed lemonade-stand law enforcement in the summer, when school is out. It’s been a periodic — and depressing — topic going back to 2011.

But here in early spring, we celebrate the Texas House’s passage of a bill amending a state law that prohibits the sale of homemade beverages. Under this amendment, minors who want to open a temporary stand would no longer have to obtain a permit.

Still, it took nearly four years to get the bill passed. The effort began in the summer of 2015 when police in the east Texas town of Overton shut down a stand run by 7- and 8-year-old girls raising money to get their dad a Father’s Day present.

Assuming the bill passes the state Senate, Gov. Greg Abbott is already promising to sign it.

“My God, man!” begins today’s mailbag after a dialogue yesterday about government secrecy.

“Are you actually defending Manning for betraying the oath of secrecy for her clearance? Are you defending this newest trend of ‘no respect for anything or anyone for any reason no matter what’ attitude? I’m sorry, but you just lost my trust in anything you publish! So disgusting!”

The 5: So you don’t care what the U.S. government is doing in your name and on your dime?

That was Manning’s motivation, as revealed in the online chat logs with the snitch who gave her up in 2010. “It was forwarded to [WikiLeaks] – and god knows what happens now – hopefully worldwide discussion, debates and reforms.” That’s why Daniel Ellsberg of Pentagon Papers fame calls Manning “an American hero.”

Certainly here in The 5 we had “discussion” and “debates” about some of the financial revelations in the State Department cables. No, they didn’t generate much in the way of “reforms,” but America and the world are still a richer place for having that information in the sunshine.

Meanwhile, it’s not a stretch to say Manning actually saved American lives. Writes Marjorie Cohn of the Thomas Jefferson School of Law: “After WikiLeaks published [her] documentation of Iraqi torture centers established by the United States, the Iraqi government refused [President] Obama’s request to extend immunity to U.S. soldiers who commit criminal and civil offenses there. As a result, Obama had to withdraw U.S. troops from Iraq.”

Granted, U.S. soldiers returned there in 2014 after a three-year hiatus because Obama’s support for jihadis in Syria fueled the rise of ISIS, but that’s another story…

P.S. “As a whole separate discussion,” a reader writes on a related topic of government secrecy, “our ability to read the codes of the Japanese would lead one to conclude that FDR was well aware of impending Pearl Harbor attack and chose not to share that information with the military quartered at Pearl Harbor.”

Our 5 Mins. are already up, but we’ll take just enough time to make the observation that Adm. Kimmel and Gen. Short might have gotten the bummest rap of the 20th century.