The Fix Is In (Lyft)

Good lord, the lambs are being led to slaughter. And the mainstream financial media couldn’t be more elated… 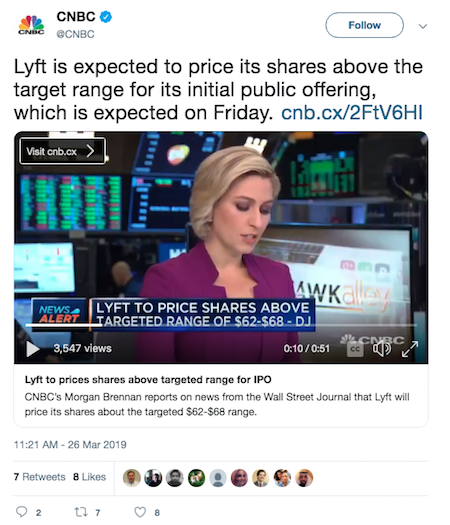 “Lyft Inc. is expected to price its shares above the targeted range for its initial public offering,” says this morning’s Wall Street Journal, “in a sign of strong investor demand ahead of the ride-hailing service’s imminent debut.”

The atmosphere among Wall Street pros is positively giddy. After a dearth of high-profile IPOs in recent months, the pipeline is more than full now.

And the biggest buzz surrounds the “tech” names. On the heels of Lyft, there’s its bigger rival Uber! And then Airbnb! And Pinterest! And Slack!

“There is significant scarcity value associated with these companies,” Rohit Kulkarni tells the Financial Times. Kulkarni is head of research at Forge, which the salmon-colored rag describes as “a marketplace for trading private shares.

“These are very large companies with multibillion-dollar revenue bases,” he continues. “We can argue about unit economics and profitability, but these companies are here to stay and that will translate into greater hunger amid public equity investors.”

Given Kulkarni’s job description, we can see why he’s licking his chops…

“THE GAME IS RIGGED!” warns the email from our Zach Scheidt. We’ve preserved the all-caps in the interest of authenticity.

“When it comes to IPO investing, Main Street investors are ALWAYS at a disadvantage,” he says.

If you’re a longer-term reader, you already know this. As our resident quant Jonas Elmerraji likes to quip, the best time to get into an IPO is before it goes public.

No, seriously, that’s when the big money is made. Too bad you as a retail investor are shut out. Yes, that’s how the system is designed.

So today, while the buzz is building, it’s a good time to review how the process works — the better to curb your enthusiasm. This is the stuff CNBC won’t tell you.

Zach knows the IPO process first hand from his hedge fund days: “It was my responsibility to handle all of the IPO business that our firm took part in.

“I would go to the road shows, grab lunch with the executives of the new companies, place calls to the brokers in charge of the deals and I would literally call in favors that were owed to our hedge fund to ensure the best treatment possible when it came to the hottest deals.”