“The plane descended through thick Andean clouds,” says our pot stock authority Ray Blanco… with a turn of phrase resembling the opening line of a novel.

He continues to set the scene: “I looked out the window to the sight of green mountains and hills littered with huge greenhouses.”

Generally, Ray’s work travel takes him far afield from his Florida home — north to Canada or out West to California and Las Vegas. But in this case, Ray traveled south to Medellín, Colombia.

Yes, that Medellín… the nexus of a cocaine cartel that turned the Colombian city into a war zone for three decades. At the center, the mysterious and ruthless Pablo Escobar.

“As kingpin of the Medellín drug cartel,” Ray says, “Escobar once controlled some 80% of the U.S. cocaine trade, earning him a spot on Forbes’ list of wealthiest men in the world.”

Then in 1993, after eluding authorities for decades, federales fatally shot Escobar while he was attempting to escape capture by jumping from one rooftop to another.

“But there’s much more to Medellín than the story of a fallen drug lord,” Ray says.

[Although the story is fascinating, fodder for several documentaries. One that comes to mind is Pablo’s Hippos…

In the ’80s, Escobar bankrolled a private zoo on his estate because… why not? He smuggled in elephants, giraffes and hippos — among other exotic animals — and opened the zoo to the public. Just your average drug lord giving back to the community… heh.

After Escobar died, the Colombian government seized his hacienda and found homes for most of the zoo animals, all except the hippos.

The four “cocaine hippos” were left to wallow in a muddy pond and, apparently, procreate. The government estimates there are between 40 and 60 hippos that’ve spread to Colombia’s Magdalena River — now the largest population of hippos outside Africa.

Huh… wonder if Ray got to see them.]

“Ever since the government got the upper hand against the narcos and the guerillas,” Ray continues, “the city and the country at large have become prosperous and peaceful. 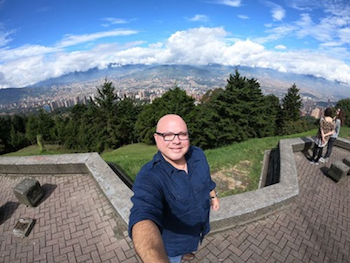 *Sigh* Sure beats the drear of early April in Baltimore…

“[Medellín] has also become the epicenter of a burgeoning industry,” Ray continues. “The… region, along with others in the country, is one of the world’s leading producers of cut flowers.”

“These factors of geography, along with others,” Ray continues, “have made Colombia into a… powerhouse.

“And all these factors happen to apply to a different flower product from a plant known scientifically as Cannabis sativa.”

“You can grow better and cheaper product — at larger quantities — than almost anywhere else,” he says. So why grow in, say, high-tax California when you can grow marijuana in Colombia’s optimal conditions for less?

Rays says: “What I saw [in Colombia] is the future of cannabis.” Something he believes will build generational wealth for investors who buy in early.

[Ed. note: 2,382 miles away from Wall Street, shares of one tiny company could explode faster and higher than ever before seen in history.

“What I’ve found will be one of the best pot investments you could ever make,” Ray says. “And I want to show you the one move that could offer you this life-changing marijuana payday.”

This may be your only chance to turn pocket change into a retirement windfall. But you must act immediately — by MIDNIGHT today.

“The snow is melting down,” says our eyes and ears at the CBOE, Alan Knuckman, “and the market is melting up!”

Sure, the market took investors on a roller coaster ride in March. A fallback at the beginning of the month led to a recuperation by the end. The S&P 500, in particular, had its best quarter in 10 years!

Will the momentum continue? According to Alan, the bears can keep contentedly snoozing a while longer…

“March and April have teamed up to deliver the market’s best two-month stretch over the past 20 years.

“So we’re just halfway through the strongest time of the year,” says Alan, “and big gains should continue to sprout up over the next few weeks.”

Looking at the markets today, the Dow’s up about 250 points — flying high on hints of a U.S.-China trade-war truce.

Now for a couple important numbers as we kick off April…

“When it comes to Wall Street,” says our income expert Zach Scheidt, “there are essentially two sides of the business you can be on — the buy side and the sell side.”

On the buy side, you have your money managers who oversee mutual and hedge funds. They’re purchasing stocks for the portfolios they run.

“Sell-side investors are the brokers and investment advisers who call up individual clients and pitch them on new ideas,” says Zach. “Think about your local adviser who wants you to open an account with him.”

In other word, they’re essentially salesmen… not that there’s anything wrong with that. “These sell-side investors have rules that must be followed.” One of the biggest being brokers and investment advisers can only recommend stocks endorsed by their firms.

Here’s where things get interesting for retail investors: “You can invest alongside [Wall Street insiders] to make money as their buy orders hit the market,” says Zach. 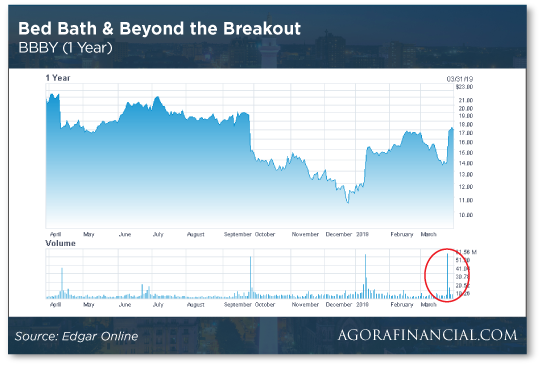 From the chart, you can see BBBY stock spiked last week on the news — and notice the spike in trade volume, too.

“But what REALLY caught my eye about Bed Bath & Beyond were the analyst upgrades for the stock,” Zach says.

“For BBBY, the news of activist investors caused a handful of sell-side companies to ‘upgrade’ their opinion on the stock,” Zach says. Say, for instance, from a hold rating to a buy.

“The key thing to realize is that when this happens, [an] army of salespeople are now released to go out into the world and pitch shares of BBBY to their customers. And that’s a big part of the reason we saw shares of BBBY move higher!”

Since most brokers and advisers, however, still do business over the phone or in person… it takes time for word to get out. “So now that BBBY is upgraded,” Zach says, “it could take weeks for these salespeople to call all of their clients and get them all on board buying BBBY.

“And during that time,” he says, “the stock should continue to drift higher.

“To be clear,” says Zach, “it’s not the upgrade that really matters.” By and large, he’s not overly confident in analysts’ stock-picking acumen…

Nevertheless, stock ratings set off a chain reaction amongst Wall Street’s salesforce, who then work to get clients on board with buying shares. “And those individual purchases can lead to great profits for us!”

That’s why Zach recommended adding BBBY shares to readers’ portfolios when the markets opened this week.

Bigger picture, he says, “Look out for similar announcements that should also lead to other stock prices drifting higher.”

Art Heist II? In 2017, The 5 reported a painting Salvator Mundi — loosely attributed to Leonardo da Vinci — was auctioned off at Christie’s… for the princely sum of $450 million.

Princely, indeed. The purchase was loosely attributed to Saudi Arabia’s Mohammed bin Salman — or MBS to his buds.

“Today the controversy continues as the Louvre Abu Dhabi, which recently announced they would be displaying the painting, canceled the scheduled unveiling without explanation,” according to Inquisitr. 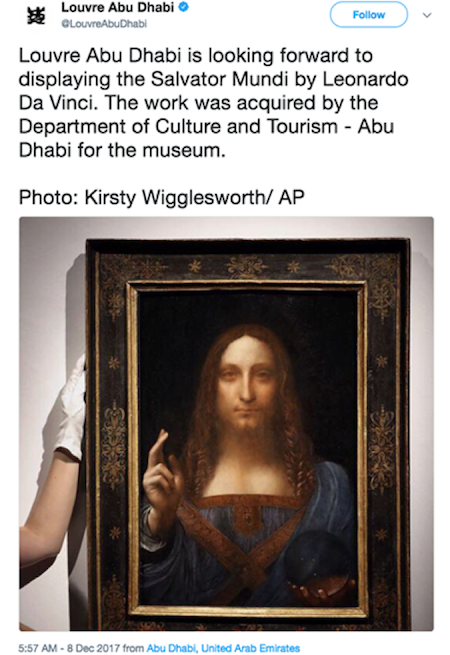 The Salvator Mundi affair resembles what Winston Churchill might call “a riddle, wrapped in a mystery, inside an enigma…”

Riddle: Is the painting a Leonardo da Vinci? Or was it painted by some Renaissance fanboy?

Mystery: Did MBS really buy it… and then sell it to the Louvre Abu Dhabi? Or was it on loan?

Enigma: Where is the damn thing?!

We’ll continue to update you as the story unfolds…

“I learn something new or with a different slant almost every day reading The 5,” a reader says in response to a question we asked last week about the quality of our content.

“The Macron/Xi Jinping story [Friday] was a good example. I enjoy The 5, have read it almost from the start and still read it daily. Maybe some people are noticing that your principles have not changed. That is good. But…

Knew that was coming…

“… what at one time perhaps seemed like a new way of thinking may now be becoming old hat. Just a wild guess… There may also be a bit more promo stuff in it than at earlier times. I can’t really address that because I skim over promo items so quickly they don’t really register.”

“Thankfully, I am not as disappointed as the upset customer; however, I feel like I am always getting pitched something,” says our next contributor.

“And it takes SOOO long to figure out the premise/intent of the video… or how much it costs! Like, I know you’re trying to sell to me, but it takes so long to even bring it up… it gets annoying.

“I love the articles themselves! But if people don’t get more value than what they give, they will feel vulnerable and won’t trust you… In the end, we both gotta deal with it because it is just a part of business.”

The 5: Thanks for all the feedback. We’re appreciative — we really are — and care what our readers have to say. We’re all ears…

P.S. The war on marijuana is drawing to a close…

This could be your last chance to turn a small grubstake into a FORTUNE.

But you need to get in ASAP.