“The first six satellites in a constellation that could one day number close to 2,000 were successfully launched Feb. 27 aboard a Soyuz rocket,” says SpaceNews.

Designed in the 1960s by the Soviets, the Soyuz “expendable” rocket carrier was launched in French Guiana. Its payload? Six OneWeb “mini-fridge-sized” satellites — each weighing about 330 pounds. 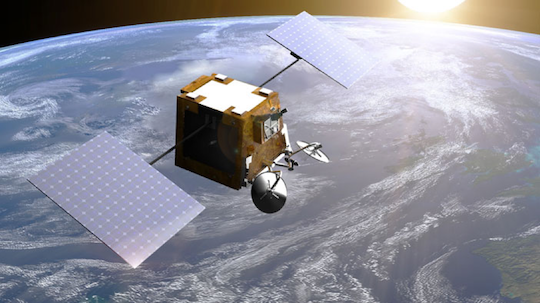 The launch marked a milestone for OneWeb, founded by American entrepreneur Greg Wyler in 2012. The company’s mission is to launch a network of satellites — manufactured in partnership with Airbus Defense and Space — to provide affordable internet access globally.

“A major function of these six satellites is to ‘bring into use’ OneWeb’s spectrum,” says SpaceNews. This in an effort to get ahead of a Nov. 29 deadline set by the International Telecommunication Union.

In other words, OneWeb must “use or lose” rights to orbit its satellites at 745 miles above Earth. So the “launch and the completion of in-orbit testing paves the way for the next 20 Soyuz launches, each carrying up to 36 spacecraft.”

SpaceNews says: “OneWeb anticipates having around 150 satellites in orbit by year’s end, starting regional service in 2020 with around 300 satellites, and reaching global coverage in 2021 with 600 satellites.”

Tech guru Ray Blanco says: “No one ever said launching a transformational new communications satellite constellation was supposed to be easy.” (Ray should know — he’s been monitoring the trend toward satellite internet access — and OneWeb — since 2017.)

OneWeb’s CEO Adrian Steckel agrees too, saying it’s been a grind “making what was a project into a company.” (Emphasis added.)

But with the February launch: “These satellites now circle the Earth in a low orbit,” says Ray, “greatly reducing the speed of light-related lag caused by communications satellites thousands of miles higher. And once they are all in orbit, they will be able to offer fast internet access virtually anywhere.”

Not only that but OneWeb should start cranking out satellites this spring from its state-of-the-art facility in aptly named Exploration Park, Florida. The company’s website says it will be able to produce 40 satellites per month.

“Soon there will be a halo of these satellites surrounding the globe,” Ray says, “like Wi-Fi from space…

“It’s a historic first in using space access to bridge the ‘digital divide’ between the internet haves and have-nots.” Ray continues: “It will also give us a new option for connecting.

“These satellites will now be tested and will be followed by hundreds more, with low-latency high-speed broadband service becoming available as early as next year.

“And I expect this new ‘Halo-Fi’ service to create a ripple effect bolstering the shares of many companies,” Ray says.

In fact, Ray’s readers are already scoring gains off the coming broadband revolution.

As for America’s most-hated cable companies… they’re mad as hell.

This brand-new internet technology promises to be faster than cable yet over seven times cheaper — that might mean saving an easy $19,494.

But everything shifts April 25, so there’s no time to lose. Discover the full story here…

“Nobody wants a lousy fraction of 1% from the large national banks,” says our income specialist Zach Scheidt. “Especially when a handful of blue chip companies currently pay quadruple that in dividends!

“Investors will look to lock in higher yields by other means — like dividend stocks — which naturally pushes stock prices higher.

“This means that market participants not only expect the current interest rate trend to last,” Zach says, “but probably to get even better for dividend-paying stocks as rates fall further.

“Great news for us!” he says. “Because now we have the opportunity to load up on the best dividend stocks well before mainstream investors begin to act.”

To the markets, where we’re seeing a lotta green… 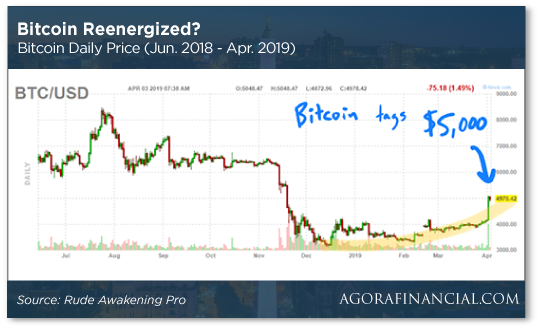 Just a few short days ago, Greg was looking for bitcoin to clear $4,000. “We’re already witnessing some impressive follow-through,” he says, “as bitcoin gained $600 in a matter of hours.

“Of course, no one can figure out exactly why bitcoin shot up overnight,” Greg continues, “not even the full-time crypto analysts.”

In all probability, the Asian markets are responsible for the significant jump. “Maybe the rally started across the Pacific,” says Greg. “Whether or not that matters is anyone’s guess.

“No matter the reasons behind the move,” he says, “bitcoin has taken the first step toward breaking out of its slump.

“It’s nowhere near the absurd levels reached in late 2017 at the height of bitcoin mania. But the quick jump toward $5,000 certainly has my attention,” says Greg.

“New York City will be the first city in the U.S. to charge motorists extra to enter the busiest areas [of Manhattan],” says an article at Quartz.

Just under the wire on April 1, New York state officials agreed to add a “congestion tax” to its 2020 budget.

In theory, the tax is meant to lessen gridlock on city streets. As for revenue from the toll? The city expects to raise $1 billion — with 80% going to upgrade the crumbling subway system and the remaining 20% going to refurbish the Metro-North and LIRR public transit.

Interesting… particularly considering Uber (and, to a lesser extent, Lyft) has lobbied strenuously for the toll. According to Financial Times, Uber’s contributed $2 million to the passage of the plan.

Uber and others of its ilk will take the hit if tolls will eliminate the real competition.

Quartz notes: “The plan was sharply criticized by the taxi industry as a devastating price increase that would further disadvantage drivers already struggling to keep pace with changes wrought by Uber.”

[NYC taxi drivers have been hit hard by ride-sharing apps; at one time, cab medallions were worth $1 million. Now? Worth just a quarter of that. Even worse, Quartz notes since 2017, nine cab drivers have committed suicide — with the most recent on March 24.]

Progress… can be a dirty business.

“Rather than investing more capital in labor-intensive endeavors, they are choosing to use their capital to buy back their shares.”

According to data compiled by asset manager Catalyst Funds: As of the middle of March, “American companies had bought $253 billion worth of their own stock.” That’s $18 billion more in stock buybacks over the same time last year.

“These buybacks… are one reason the market is staying as high as it is,” Nomi says, “despite uncertainty about trade and economic matters.” With some of that money still trickling in from enormous corporate tax cuts last year.

“Even if the real economy continues to falter,” she says, “these buybacks could move on full steam ahead, as evidence so far this year suggests.”

Nomi’s take? “What this means for investors is that buybacks and cheap money will lift markets even as slow growth and trade wars and geopolitics… dampen them.”

“The yield curve inverted last week, but not enough to make me worried,” says our income specialist Mike Burnick.

“In fact, the S&P 500 has gone up by 1% since that inversion!” Even though Mike says he hasn’t seen so much market gloom-and-doom since December.

“Anybody that listened to those naysayers missed out on a lot of stock market gains this year,” Mike says. “The S&P 500 was up 12.3% in the first quarter of 2019, which is the largest quarterly gain in almost a decade and the strongest start of the year since 1998.” 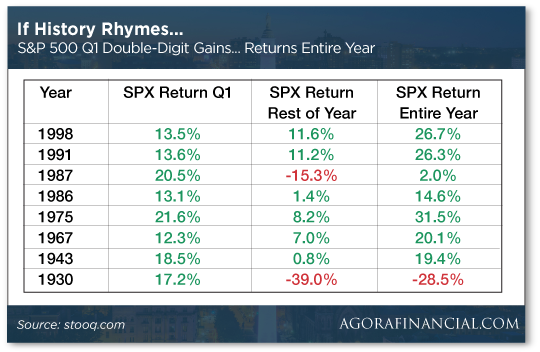 Double-digit first-quarter S&P 500 returns? According to the chart, most years have gone on to experience double-digit returns for the entire year. Of course, the outlier in this case is the Great Depression of 1930. *Gulp*

“Conditions today are nothing like 1930,” says Mike, “and instead of racing away from risk, the high-yield bond market is giving us an even more important signal than the inverted yield curve.

“Look at how the High Yield Bond ETF (HYG) is performing: up 10% from its December lows. 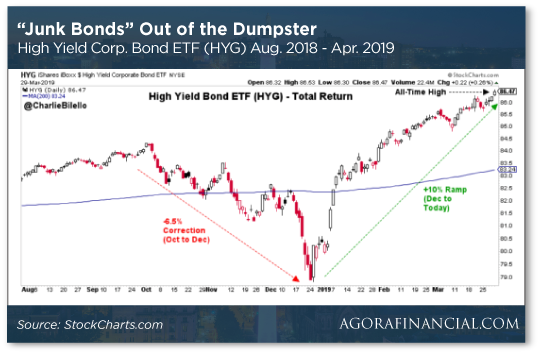 “Junk bonds are not only rising,” says Mike,” they are hitting new all-time highs and are the strongest-performing part of the fixed-income market.

“Clearly, investors are embracing risk, not running from it.” Mike concludes: “It’s not yet time to cut and run away from this stock market.

“Ignore the naysayers,” he says, “stay invested and cash in on even-higher stock prices to come.” 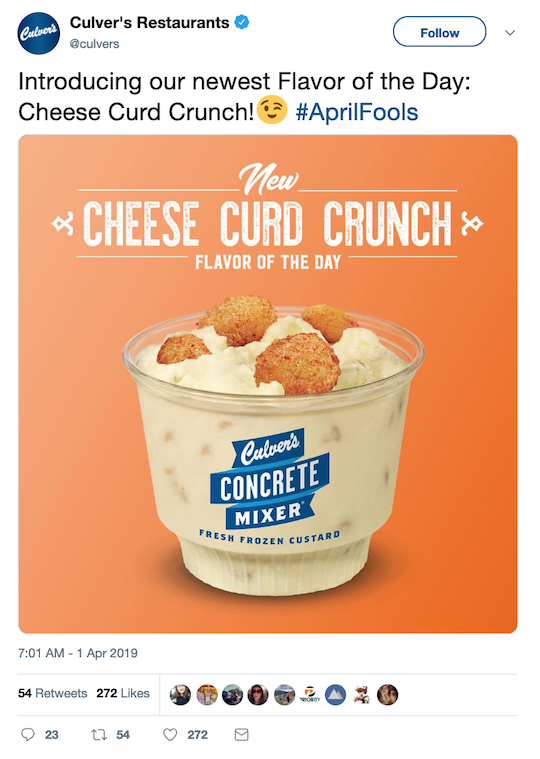 “[Culver’s] posted for April Fools’ Day that the Flavor of the Day Monday is Cheese Curd Crunch,” says local station WISC. “The post included a photo of the dairy-filled concoction.”

But the restaurant chain might be on to something: Customers are clamoring for the flavor. One commented on Twitter: “Culver’s you done goofed with this. The masses have spoke make this real or suffer the consequences.”

A grammatical nightmare… but funny nonetheless.

Culver’s has since offered a solution — just add their famous deep-fried cheese curds to vanilla custard and — voila!

With exclusive global rights to distribute what Bloomberg is calling “internet delivered from the heavens,” Halo-Fi will be fast and everywhere and could cost an eighth what you’re paying now.

Untold amounts of money could be made as this massive shift takes place.

And one opportunity will strike as soon as April 25. Click here now.