The Most Hated Tax Cut In History

Never have so many people perceived so little benefit from so large a tax cut.

Only 17% of respondents to an NBC News/Wall Street Journal poll believe their income tax burden fell as a result of the tax law passed at the end of 2017. Even among “core Trump supporters,” only 36% believe they’re better off.

The reality is that 80% of filers have a lower liability under the new law, according to the latest numbers from the nonpartisan Tax Policy Center.

Meanwhile, with only six days to go before Tax Day, the refund picture is improving. Sort of.

In mid-February, we took note of a minor uproar after the IRS released some early tax-season figures. The typical refund was down 9% from a year earlier… and the total number of refunds was likewise down. Democrats carped about how refunds were “shrinking” while corporations and “the very wealthy” got “a huge tax cut.”

The IRS has just updated the numbers through March 29. The average refund now clocks in at $2,873 — only $20 less than last year. That said, the number of taxpayers collecting a refund has fallen by 1.6 million.

Hmmm… The total number of filers was 141.2 million in 2015, the most recent figures we can readily dig up. And presumably most of the people who haven’t filed yet are the ones who know they won’t be getting a refund anyway. That 1.6 million is the proverbial drop in the bucket.

So the whole “shrinking refunds” thing has been overblown. (For today, we’ll leave aside the fact that collecting a big tax refund is tantamount to giving Uncle Sam a big interest-free loan.)

But it’s also undeniable that perceptions aren’t matching up with reality. What gives?

Between the way the GOP wrote the law and the way the IRS implemented the law, the whole thing’s been a hash from start to finish.

As we said in February, the benefits don’t feel tangible or visible — in contrast with the Bush 43 tax cuts, when Uncle Sam sent a check for hundreds of dollars to most American adults.

Back to the Tax Policy Center numbers: For the 60% of Americans at the lower end of the income spectrum, the total benefit is less than $1,000.

And for the many people within that 60% who collect W-2 income, the $1,000 got spread across 26 paychecks a year. It was hardly noticeable.

It was even less noticeable because the lower withholding for income taxes took effect in early 2018 — at the same time many wage earners were hit with higher withholding for health insurance. And even if their take-home pay rose a bit, the extra few bucks got eaten up by rising gasoline prices. They jumped an average 50 cents a gallon from January–May.

Meanwhile, the IRS — having botched its withholding tables for employers last year — is trying to put the onus on taxpayers this year. (What the hell’s with the horse!?) 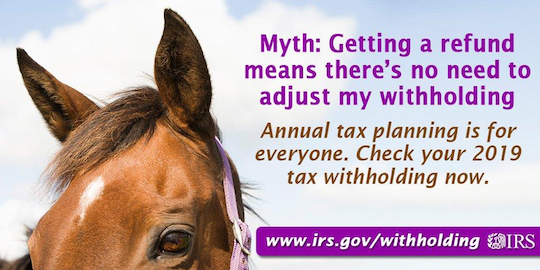 Oh well… It’s all a moot point in another seven years, when the individual tax cuts expire. Assuming Congress doesn’t rewrite the law before then. Which seems likely.

[Ed. note: Even if you’ve already filed this year, you might want to file an amended return after you see the Rich Dad 2019 Tax Guide — prepared by Robert Kiyosaki and his crack team of tax experts.

It’s packed with 91 tips and tricks to maximize your refund (or minimize what you owe). The “paycheck loophole” on Page 17 alone could be worth $13,000 or more.

The major U.S. stock indexes are in the red today, and there’s no shortage of reasons they should be…

The White House justifies the tariffs as a response to the EU’s subsidies for Airbus, which Washington considers unfair to Boeing. (Uhh, doesn’t Boeing have bigger problems at the moment?)

With that, the Dow is down nearly three-quarters of a percent at last check, to 26,155. The S&P 500 and the Nasdaq are registering more modest losses. Gold has once again pushed above $1,300. Crude is down but still over $64 a barrel.

But a U.S. recession is still a ways off, judging by one of the more reliable recession indicators out there.

The Philadelphia Fed State Coincident Index crunches four employment figures from all 50 states, generating an overall number that ranges between plus 100 and minus 100. Numbers below plus 50 have marked the onset of every recession over the last 40 years.

The number for February comes in at 76 — up from 60 the month before. It’s the weakest two-month stretch since the spring of 2016, but nothing to get too concerned about.

That said, there are signs of job-market trouble in three states — Minnesota, Kansas and Montana.

Small-business owners have settled into a “new normal” as winter turns to spring in 2019.

The monthly Optimism Index from the National Federation of Independent Business registers 101.8 for March — nearly unchanged from February.

The number tumbled late last year along with the stock market and tumbled further in January — which the NFIB attributes to the partial government shutdown. 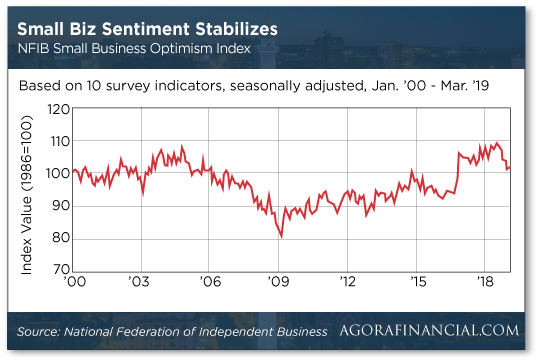 One point of concern in the survey is that inventories appear to be too large and owners are in no hurry to add to them.

The often-revealing “single most important problem” part of the survey looks nearly identical to a year ago — with 21% of owners citing “quality of labor.” In other words, good help is hard to find. Taxes and regulations are tied for second place at 15%.

Speaking of “cautious optimism,” that’s still the vibe about the stock market from this year’s CMT Symposium in New York.

“I’ve been coming to this conference for the better part of a decade now,” says our resident quant Jonas Elmerraji. It’s a gathering of 300 or so traders, portfolio managers, analysts and so on, all of them versed in technical analysis.

“Officially,” he says, “it provides a look at the tools and the new techniques that other folks are using. I never leave without some interesting ideas to test. But unofficially, this conference has always been a valuable sentiment gauge.”

The sentiment right now? “These folks think that the market is heading higher, even if there are a few caution flags to be aware of.

“The fact that most of the attendees are only cautiously optimistic is probably a good thing. If everyone were unreservedly bullish, I’d probably be more concerned that this bull market could come to an end.”

It’s when sentiment is at its most giddy — think the peak of the dot-com boom in early 2000 — that the end is usually nigh. Fortunately that’s not the case now…

The day might not be far off when a cannabis business can actually get a bank account.

Because banks are federally regulated and because marijuana remains illegal at the federal level, pot remains a largely all-cash business — even where it’s legal on the state level.

Explains our penny-pot stock authority Ray Blanco, “While regulators have approved smaller banks to do business with cannabis-related companies, those clients have typically been required to only be in the periphery of the pot businesses (i.e., not directly handling the plant) or have been cut off from lending and checking services to avoid the ire of the feds.”

But two weeks ago, the House Financial Services Committee approved a marijuana banking bill. “If the bill ultimately makes it into law, it could open new, cheaper funding to an industry that’s eager for growth capital,” Ray tells us.

Meanwhile, support for greater access is coming from the Federal Reserve. “At the American Bankers Association summit last week,” says Ray, “the presidents of the Federal Reserve banks of Richmond, Kansas City and Atlanta each called for clarity from Congress.”

Prospects for passage in the House appear good: The bill has 152 co-sponsors, 12 of them Republicans.

“Why was there a charge for taxes for the subscription?” writes a new subscriber to one of our entry-level newsletters. “This is the first time I have been assessed charges for sales tax for any newsletter subscription.”

The 5: As we’ve mentioned periodically, the Supreme Court issued a ruling last year that opened the way for cash-hungry state governments to start collecting sales taxes from companies that do business online.

As it happens, Agora Financial saw the writing on the wall a while back — and began adding state sales tax in 2017. If our competitors aren’t doing it yet, rest assured they will.

On the subject of Jim Rickards’ 2020 election outlook, “Jim did not mention Andrew Yang as a possible dark horse in the Democrats’ presidential field,” a reader writes.

“He has enough support to enter the first debate. Some of his planks are in the fringe but he has thought through so many of the country’s ills and has a reasonable albeit unconventional plan for each.”

The 5: Ah, a prospective member of the “Yang Gang” speaks up. We’ll have more to say about Yang and his “unconventional” ideas either later this week or early next.

“Your cauliflower rice story brought to mind an anecdote about Arkansas, my neighbor to the south,” a reader writes.

[If you missed the item last week, Arkansas banned the marketing of “cauliflower rice” on the grounds that it’s not really rice.]

“I’m now retired, but I worked in the property and casualty insurance industry, which is regulated at the state level. The company I worked for wanted to introduce a homeowners’ rating plan in Arkansas that we had in place in most other states, but their insurance department was balking.

“I got on the phone with their regulators and tried to explain how this particular way of rating was more intuitive, better allocated premiums in relation to losses (i.e., was more fair) and had nothing hidden or tricky about it.

“Finally, her real objection surfaced. She blurted out, ‘You’ve got to understand this is Arkansas! The people just won’t understand!’ I guess you nailed it with your ‘paternalistic’ comment.”

The 5: Who knew the collective self-esteem in the Razorback State was so low?

P.S. Have you heard about the tax loopholes the IRS might be looking to close?

Whether you have or not… you’ll want to check this out right away.