The Yang Gang and the “AI Apocalypse”

Well, we figured this day was coming sooner or later.

The government of Ecuador withdrew its asylum protection for WikiLeaks founder Julian Assange. He’s now in the custody of police in London, awaiting extradition to the United States.

We won’t dwell on the topic today: Most of what we have to say about it we already said last fall — including why we care as purveyors of financial information and why you should care as an informed citizen.

At least it’s not an Espionage Act indictment carrying the death penalty. Rather, the feds crafted a narrow charge that in 2010 Assange “agreed to assist [Chelsea] Manning in cracking a password stored on U.S. Department of Defense computers,” with a penalty of five years in prison.

Still, the indictment “sets a dangerous precedent,” says cyber-geek and journalist Micah Lee — who is no fan of either Assange or WikiLeaks but who can keep a clear head.

“If this sticks, what stops them from charging other journalists with ‘conspiracy’ for deleting metadata and chat logs to protect sources, encouraging sources to leak documents or using whistleblower submission systems?”

In other words, the feds are now criminalizing something both “mainstream” and “alternative” journalists do routinely. 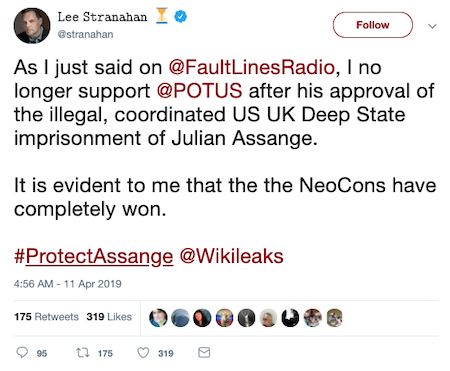 Meanwhile, #Resistance types who will never forgive WikiLeaks for making Saint Hillary look bad in 2016 are celebrating what the Trump Justice Department just did.

Left and right unite… and whatever’s left of our “limited constitutional republic” drifts ever closer to its demise.

On to our main topic today…

To hear one 2020 presidential candidate tell us, this is the reason Uncle Sam should send every working-age American a check for $1,000 every month… 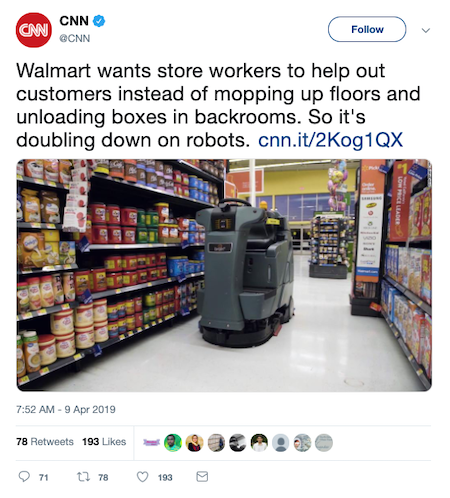 Walmart plans to deploy “autonomous floor scrubbers” in more than a third of its U.S. stores by next February. Ditto for robots that can automatically scan and sort boxes as they come off delivery trucks. And at a few stores, robots will be scanning shelf inventory.

“Smart assistants” the company is calling these robots. The company says they’ll cut the amount of time workers spend on “repeatable, predictable and manual” tasks. Skeptics naturally wonder if it will put some — or many — of those workers out of a job.

“As president, my first priority will be to implement Universal Basic Income for every American adult over the age of 18: $1,000 a month, no strings attached, paid for by a new tax on the companies benefiting most from automation,” promises Andrew Yang.

Mr. Yang, a 44-year-old serial entrepreneur, is a dark-horse candidate for the Democrats’ presidential nomination. His push for “UBI” has garnered him a small but fervent following that’s taken to calling itself the “Yang Gang.”

“The way Yang sees it,” Ray explains, “he’s going to get the country ready for the ‘AI apocalypse’ — when new technologies like robots and artificial intelligence are going to destroy millions of jobs. The list of vulnerable jobs is wide. In many states, the most common job is truck driving. What happens when self-driving trucks are able to take to the roads?

“Touch screens are already replacing order takers at McDonald’s locations across the country. Now the burger giant has spent $300 million on an AI company. The tech will help determine what menu items to show customers based on variables like weather, time, traffic and the like.”

You get the picture. Grim stuff, right?

“It might be a good idea to take a look at history,” Ray gently suggests.

“We’ve been through massive tech disruptions in the past. It used to be that 80–90% of people worked in agriculture. These days, it’s less than 2%. But those 2% feed far more people. The difference is labor-saving automation. The country didn’t become poorer as a result but far richer instead as workers gravitated toward other fast-growing areas like manufacturing.”

Amen, Ray. Every technology breakthrough going back to the earliest days of the Industrial Revolution has been met with cries of, “But what about the masses who will be thrown out of work?” And every time, there’s always more work to be done on the other side of the disruption caused by the technology breakthrough.

Why would now be any different?

“Rather than doom and gloom, new technologies like robotics, AI, 5G and more might usher in a golden age of economic growth,” Ray ventures.

“By raising productivity for workers, these technologies will also enable new, higher-paying jobs to take the place of the ones that go away.

“A lot of the dreary economic performance that took place over the past decade is because we haven’t had enough tech innovation, rather than too much. Productivity growth stagnated compared with prior decades, like the heady days of the 1990s tech boom.”

Yep. It comes back to venture capitalist Peter Thiel’s white paper issued in 2011: “We wanted flying cars, instead we got 140 characters.”

“But,” Ray goes on, “there are signs that things might be starting to change, with business and industry figuring out how to take the latest technological innovations and turn them into productivity enhancers, raising GDP growth back to its previous long-term trends and growing the economy by leaps and bounds.”

Well, assuming governments and central bankers don’t get in the way. A big if, we know.

In the meantime, if you want access to Ray’s favorite high-tech plays, you’ll want to check this out right away.

To the markets, where gold’s latest foray above $1,300 didn’t last long.

The bid began drifting down overnight during trade in Hong Kong, spilled over into the London market and has now taken hold in New York. At last check, the Midas metal was down nearly $13 at $1,295.

The major U.S. stock indexes are meandering — the Dow and the S&P 500 up slightly, the Nasdaq down slightly.

Traders are chattering about the minutes from the Federal Reserve’s March meeting, released yesterday afternoon. Bloomberg’s thumbnail sketch reads like this: “Federal Reserve board members grappled with ‘significant uncertainties’ at last month’s meeting, while voicing the need to maintain policy flexibility.”

If you read between the lines that they have no effing clue, you’re right.

Elsewhere, the world’s longest and most boring financial crisis is set to drag on at least six more months; the European Union has given British leaders until Oct. 31 to get their Brexit act together. Ugh…

“Uber is preparing for the worst,” says our Greg Guenthner, as the big dog of the ride-hailing business prepares to go public next month.

This morning’s Wall Street Journal tells us Uber “is aiming for a valuation in its impending initial public offering of as much as $100 billion.”

Oops. Last year, the lead underwriters for the IPO — Morgan Stanley and Goldman Sachs — were pitching a valuation as high as $120 billion.

But as we said here yesterday, it’s all about lowered expectations for tech IPOs now — ever since the disappointing debut of Uber’s smaller competitor Lyft. “Shares cratered more than 10% yesterday as early speculators headed for the exits,” Greg says. “After briefly hitting highs near $90 on its first trading day, Lyft is now threatening to break below $60.” 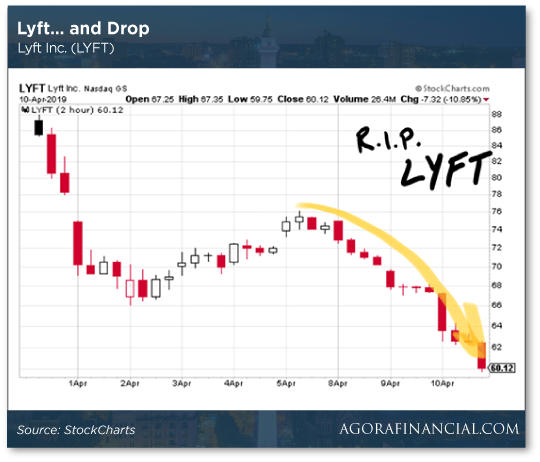 Uber has one saving grace: Another tech “unicorn,” Pinterest, goes public next week.

“That could be good news for the Uber folks,” says Greg, “who will get to watch how investors respond to another high-profile offering from the sidelines.”

For the record: By one calculation, Federal Reserve policy has swindled savers out of up to $600 billion.

You know the story, if not the number: Because the Fed kept interest rates so low for so long after the Panic of 2008, you didn’t collect squat for interest on your bank accounts and money market funds. In a new report, Wells Fargo analyst Mike Mayo claims that policy cost savers $500–600 billion.

We’re going to go with the high side of that estimate — and maybe higher. In April 2015, we cited research by the giant reinsurance firm Swiss Re, which calculated the damage at $470 billion. And the Fed didn’t really allow interest rates to start rising again until late 2016-early 2017.

Took long enough: What’s become known in Arizona as “the blow-dry bill” is on its way to the desk Gov. Doug Ducey.

“America is drowning in ridiculous licensing laws that mostly exist to reduce competition in licensed professions, usually propped up with vapid arguments about protecting the public’s well-being,” explains Reason’s Eric Boehm by way of background. “Even so, Arizona’s blow-dry licensing law was an outlier.”

No doubt. Under current Arizona law, hair stylists who operate only blow dryers and curling irons — that is, they don’t cut or dye or perm — are required to obtain 1,000 hours of training costing $15,000. Violators faced up to six months in prison and fines up to $2,000.

Really, there might be no better example of how licensing laws knock out the first few rungs at the bottom of the economic ladder.

But a repeal measure has now passed both houses of the legislature, over the objections of both the state’s cosmetology licensing board and many licensed cosmetologists. Said one stylist during hearings last year: “If there are unlicensed stylists that work in these [popular blow-dry bars], they are going to take a lot of work from us.”

Well, props for honesty at least…

“Tax refunds are a measure of stupidity — the higher the refund the greater the foolishness,” a reader writes after our latest tax-season issue on Tuesday.

“A truer measure of how much benefit one got from the tax cut is to figure your 2018 income on the 2017 law and then compare the result with your actual 2018 return.

“I have done this with several of my clients in the $100,000-160,000 income category — in California, no less. The result was as high as $4,500 in savings for a family with two kids earning $160,000. This is quite contrary to what a so-called CPA wrote in about a while ago. His clients would be well advised to find another adviser.

“Perceptions are dangerous when influenced by propaganda and ignorance. Great example: Tax rich corporations 90% to help who? Europe, China, everyone but American consumers?

When will it sink in to the general public that they, not the rich corporations, are ultimately paying that tax in many direct and indirect ways? Politics is the art of deception — liars galore!”

The 5: Yeah. A while back I ran the numbers for my wife and me as you suggest — using the imprecise but good-enough cheat sheet shared here in February — and concluded we’re better off under the new law. The Tax Policy Center reckons only 6% of filers have a higher liability relative to the previous system.

Of course, as we’ve pointed out before, the tax cuts were not offset by spending cuts to match… so the debt keeps piling up.

The piper will have to be paid — just not right away.

P.S. There’s a strange corner of the Internet where people seem to believe Assange will be brought to the United States only to be granted a pardon by Trump. Get real…