Surprised? Our income expert Zach Scheidt’s nonplussed; in fact, from his years as a hedge fund manager, he’s come to expect such dubious deals from Wall Street.

“On Wall Street, everyone knows that these kind of deals are available. It’s just a matter of knocking on the right doors and finding someone willing to take the other side of your trade.”

For his part, Zach’s concerned retail investors don’t get the raw end of the deal, especially in light of so many highflying IPOs expected to come to market this year. 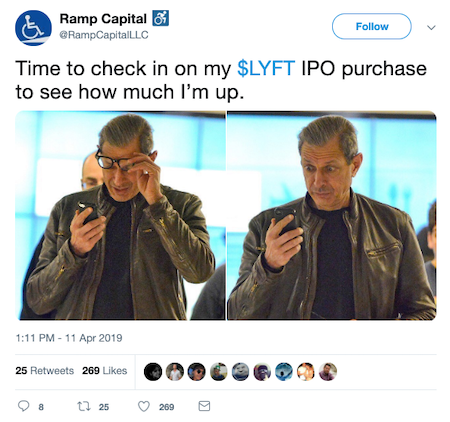 “I want… to make sure you understand the dynamics behind these deals,” he says. “That way, you can profit alongside Wall Street as new stocks go through their normal process of starting to trade instead of being the gullible investor that loses money.”

First things first: “When a new stock like Lyft starts trading,” Zach says, “only a small portion of the shares are typically available to start with.”

Meaning most venture capitalists and institutions that invested in Lyft before its IPO own shares that are on lockdown — not available for public sale — generally for 180 days.

The premise is simple… basic Econ 101, in fact. A supply glut means lower prices. Too many shares released and sold on the market? Share prices nose-dive.

While early investors in Lyft can’t “technically” sell their shares, “some of these investors appear to have found ways to make trades betting the stock will trade lower,” Zach says, “with the help of Morgan Stanley.

“In other words, these investors are hedging their bets.”

We can only surmise Lyft execs are pissed that Morgan Stanley — the banking giant that was supposed to be working with Lyft for a successful IPO — is now smoothing the way for investors to bet against newly minted shares.

Closed-door shady deals with Morgan Stanley and “locked-up” shares aside, Zach says: “We can’t afford to be naive about… how the game is truly played.”

Here’s how it works: “Investment banks like Morgan Stanley give shares of the best IPOs to their favorite clients. That way,” says Zach, “when an IPO trades up 23% on the first day like Lyft did, the best clients get the biggest profits.”

The hedge fund where Zach worked happened to be on just such a VIP list. “So we got shares of the best IPOs, but there was a political game we were expected to play.”

Say Zach’s connections at Morgan Stanley gave him 10,000 LYFT shares at $72… but there was a catch. The Morgan Stanley suits fully expected Zach to keep those shares on the lowdown for a few weeks.

“By holding the shares instead of selling them,” Zach says, “I would be helping to support the price of the stock. And that would help Morgan Stanley’s reputation for being able to successfully manage an IPO.”

“So if a high-level executive looked at my account three weeks after the IPO and saw that I was still holding the shares, I would likely be given a great allocation for the next big IPO because I was considered to be a team player.”

To up the ante, if Zach bought more IPO shares on the open market a few days’ after the company’s debut, “that would show that I was actively helping Morgan Stanley keep the price higher.” Next high-profile IPO? Zach’s hedge fund would move higher up on the VIP list.

But two can play at that game: “I would often sell calls or even short stock of the same IPO in a different account that Morgan Stanley didn’t know about,” Zach says.

(Hedge funds have an assortment of accounts open with major and discount brokerages.)

And at the end of the day, Zach’s job was to make money for his clients, not curry favor with Morgan Stanley (or any other broker, for that matter)!

“It would have been irresponsible for me to just hold the IPO shares indefinitely,” he says, “especially if they traded lower.”

So Zach walked a fine line, playing by Big Banks’ rules… while working to lock in maximum profits for his clients.

What should Main Street investors know when more big-name IPOs pop on the scene in the coming months?

“All of this selling causes shares to trade lower,” says Zach, “which can last a few days or even a few weeks.”

“We typically have a great opportunity to buy shares at a discount to where they were trading,” he says. “And we can hold our shares as Wall Street begins building their long-term positions…

“It can take a long time for Wall Street institutions to load up on these new stocks, because it often takes time for enough shares to actually be available for them to buy.

“It’s a great predictable pattern where these IPO stocks can then march steadily higher,” Zach continues. “We’ll certainly be watching all of the popular IPO names closely to take advantage of these opportunities.”

According to Zach: “We’re not there yet with Lyft. But maybe in a week or two we’ll get our shot at buying this name at a discount. I’ll keep you posted!”

[Ed. note: Go behind the scenes of Wall Street like never before… with access to buyout intel normally reserved for big-shot bankers or multimillionaires.

Zach Scheidt blows the lid off these lucrative deals, including a shot at life-changing bonus payments like $11,042… $28,500… and even a rare $42,333 from some of the market’s fastest-moving buyout deals.

All because Zach’s brand-new buyout indicator — with a 95.2% accuracy rate — has finally leveled the playing field when it comes to wealth creation.

To help take advantage of Zach’s predictive market service, you’ve got a $608.25 credit in your account… but it’s only available through the month of April.]

A desultory industrial production number from the Federal Reserve today…

The figure registered an “unexpected” 0.1% slip in March. Ouch… the “expert consensus” was looking for a 0.3% increase.

Worse, the manufacturing component of the number came in flat. That too was weaker than expected. At least it’s better than the previous two months of shrinkage.

“The report’s two other components are also soft in today’s report with utilities up 0.2% and with mining, which has been a major source of strength the last two years, down 0.8% in the month,” Econoday says. “Still, growth in mining volumes remains in the double digits on an annual basis, at 10.5%.”

“In just the first two months of the year,” says our biotech maven Ray Blanco, “American biotech and pharma companies have spent more on acquisitions than during all of last year.”

Even more eye-popping, almost $150 billion in acquisitions so far this year is more than biotech and pharma acquisitions in all of 2016 and 2017 combined. 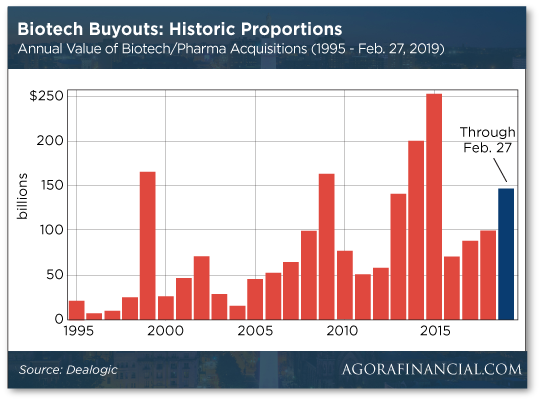 “On the current pace,” Ray says, “2019 will turn out to be the biggest year for biotech buyouts in history.”

And these buyouts are putting smiles on the faces of some ecstatic investors: “The average premium paid — that’s the acquisition price in excess of the share price before the deal is announced — is higher than ever at 120%,” Ray says.

So what’s behind biotech/pharma buyout fervor?

“On the one hand… Big Pharma companies all seem to be suffering from a similar disease: drugs running off patent.”

Add to dwindling brand-name drugs: Pharma has been cutting research and development budgets, so there are no new drugs in the pipeline to replace the old ones.

“Needless to say, slashing R&D is no way to grow a business that is based on drug discovery,” says Ray. So Big Pharma has to scare up smaller biotech companies who’ve been doing the hard work of bringing a drug to market.

“But that isn’t the only reason Big Pharma’s buyout appetite has been stimulated recently,” Ray says. “The FDA, acting under President Trump’s mandate to reduce the prices of drugs, has been breathing down Big Pharma’s neck.”

The FDA has encouraged competition by retooling guidelines and working “double-time to approve new drugs.

“Biotech discoveries are not slowing down, they are actually accelerating,” says Ray, “Pharmaceutical innovation is growing and turning into new drugs.

“And the FDA is doing more than ever to work with drug developers to help them bring their lifesaving therapies to market.”

What should investors look for in biotech/pharma buyout opportunities?

“The first group are companies that have passed (or largely passed) the gauntlet of clinical trials and regulatory approvals. They have highly promising products either in the market or about to enter the market,” says Ray. “With proper marketing, these smaller companies’ products have blockbuster potential.

“The second group are companies that might still be in the developmental stage. However,” Ray continues, “they are holders of fundamentally breakthrough platforms — biotechnology with the potential to create profitable therapies in inadequately served clinical indications. These smaller companies have engines that can drive growth.”

“Of course, there’s no reason why a company can’t have both — and these are the likeliest to be acquired.”

For his part, Ray’s on the lookout for biotechs investigating gene-editing therapies. “These companies hold the promise to heal previously ‘undruggable’ diseases, in some cases maybe for good, with a single dose.”

That’s incredibly welcome news for patients… and for investors in some of these biotech buyout targets.

Ray says: “The buyout frenzy means that shareholders in these bought-out biotechs over the past few months have, on average, woken up to an instant overnight gain in excess of 100%!”

In order to be at multiple rally locations at once, Yang plans on showing up as a 3D hologram. 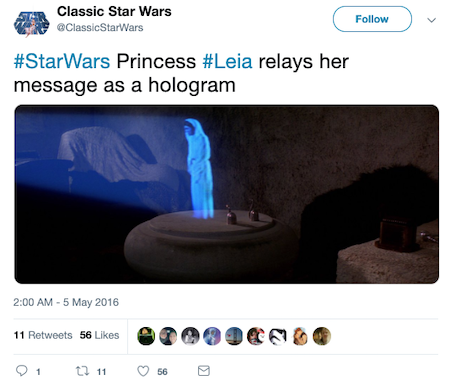 Help me, millennials; you’re my only hope.

“Yang discussed the hologram during an appearance on TMZ Live,” says an article at Engadget.

“The segment showed off a hologram version of Yang dancing and performing with the famous Tupac hologram that appeared at Coachella in 2012.”

Because nothing says desperately seeking the millennial vote more than a hologram version of your 44-year-old self dancing with a dead rapper. (No disrespect… RIP, Tupac.) Oh, and the tangential association to Coachella *rolling eyes*.

Surprisingly — or not — Yang wasn’t excoriated on social media for blatant pandering. “Instead, the candidate received a considerable amount of positive feedback for the concept,” says Engadget.

“Yang plans to use the hologram, broadcast from the back of a truck, to deliver a recorded version of his stump speech to crowds in battleground states. Yang would set up in a studio and remotely beam into the rally to answer questions live and in real-time after the speech finished.”

We’re pretty certain most Q&As will center on Yang’s embrace of universal basic income… a topic sure to scintillate young voters.

Here’s the thing: How dependable is 3D-hologram technology? Or even the truck he plans to broadcast from?

P.S. Agora Financial’s customer service team has found an outstanding number of customer accounts credited for the month of April…

And your account has received a $608.25 credit opportunity, ready to be claimed immediately.

To learn how to claim this credit, please click here.