The Catalyst For a “Melt-Up”

Barring something unexpected before day’s end, the S&P 500 will notch a fourth consecutive close above the round number of 2,900.

It’s taken more than six months for the index to clamber back to that level. Next barrier: The all-time high of 2,931 reached seven months ago. 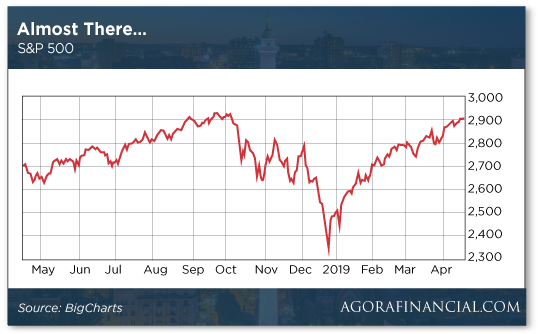 If the S&P can breach that barrier, there’s no telling how high it could go from there.

“We have a risk of a melt-up, not a meltdown here,” affirms Larry Fink, CEO of BlackRock — the world’s biggest asset manager.

“Despite where the markets are in equities, we have not seen money being put to work,” he told CNBC yesterday. “We have record amounts of money in cash. We still see outflows in retail in equities and in institutions.”

Fink’s remarks are striking in light of something he said around this time five years ago.

On April 3, 2014, Fink wrote a letter to the other 499 CEOs of the S&P 500 companies. We cited his words that day: “It concerns us that in the wake of the financial crisis, many companies have shied away from investing in the future growth of their companies. Too many companies have cut capital expenditure and even increased debt to boost dividends and increase share buybacks.”

We furnished a real-world translation, too: “After five years, you turkeys have cost-cut as much as you possibly can. If you expect to keep growing your earnings, you jolly well better start investing in the future of your businesses to attract more customers. You do think such investments will pay off, right? Don’t you? Anyone? Bueller?”

Fink implied the stock market couldn’t keep rising just on the strength of buybacks and dividend increases. Turns out he underestimated the market’s capacity to do just that. Even last year, flush with cash from the big corporate tax cut, Corporate America poured more money into buybacks and dividends than it did into capital expenditures and research and development.

Buybacks are a major driver of the stock market’s rally so far in 2019.

As a reminder… if you own stock in a company that buys back shares, it reduces the overall share count — which means once the buyback is executed, you then own a slightly bigger piece of the company.

“According to FactSet, the 500 companies of the S&P 500 have bought $286 billion of their own stock in the first 90 days of 2019,” says Agora Financial income contributor Mike Burnick. 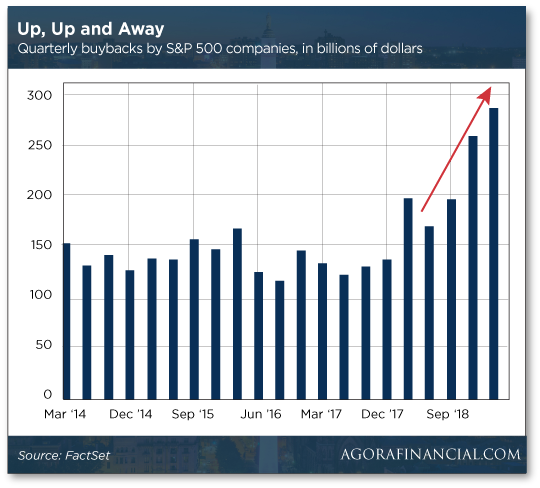 “Moreover,” Mike goes on, “Corporate America has announced more than $1 trillion of buybacks for 2019. Lori Calvasina of RBC Capital Markets reported that eight times as many companies expect to increase buybacks versus decreasing buybacks.”

Buyback activity is so strong, it’s been making up for investors pulling out of the stock market.

Institutional and retail investors combined pulled $39.1 billion out of the stock market during the first quarter of this year. Ordinarily, that would be a major drag on the stock market… but the S&P 500 rose 14% during that same timespan.

“Corporate America is buying back its own stock at such a furious pace that it is overwhelming the investor exodus,” Mike sums up.

Now with the S&P within spitting distance of all-time highs again, don’t be shocked if investors suddenly flood back into the market.

That’s the “record amounts of money in cash” that BlackRock’s Larry Fink is referring to. Sentiment can turn on a dime… and if the S&P busts past 2,931, a stampede could quickly follow.

“I would clearly tell you at this moment,” says Fink, “most investors are exposed by being underinvested at this time.”

Obviously the safe way to play the uptrend is with an S&P 500 index fund. But if you’re at all interested in juicing your returns and dramatically outperforming the broad market… Mike Burnick is keen to tell you how to “upgrade” your brokerage account.

Mike explains how it works as soon as you follow this link. For reasons he’ll explain when you click, you’ll want to take action before midnight tomorrow night.

As the day wears on, the major U.S. stock indexes are almost ruler-flat… but the S&P is still hovering above that round number 2,900.

Gold has slipped a couple more bucks after yesterday’s sell-off, the bid now $1,274. Crude is steady after the Energy Department’s weekly inventory numbers, a barrel of West Texas Intermediate a few pennies above $64.

Among the big market movers: Netflix (NFLX) is down nearly 1% after its latest quarterly numbers, which revealed slowing growth in its subscriber count. (You mean trees don’t grow all the way to the sky?)

Meanwhile, the Justice Department appears set to nix the merger of T-Mobile (TMUS) and Sprint (S) — at least as the deal is “currently structured,” says The Wall Street Journal. T-Mo is down 2%, Sprint 5%.

The big economic number of the day domestically is the trade deficit — which shrank in February to $49.4 billion. That’s the lowest figure in seven months. Overseas, China’s GDP clocked in a hair better than expected.

The health care sector has fallen out of bed the last two days — perhaps because “Medicare for all” is suddenly a thing.

Yesterday, the giant insurer UnitedHealth Group (UNH) reported its quarterly numbers and held the usual conference call with analysts. Toward the end of the call, CEO Dave Wichmann felt compelled to speak up about Sen. Bernie Sanders’ proposal to expand Medicare to the population at large. He called it a “wholesale disruption of American health care” that would “surely have a severe impact on the economy and jobs.”

UNH shares promptly tanked, taking down the rest of the health care sector with it. Here’s a year-to-date chart of XLV, the big health care ETF… 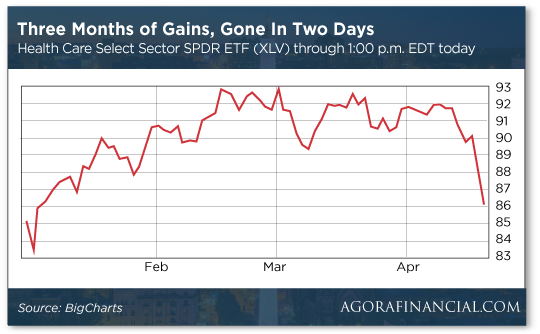 Hmmm… Feels like an overreaction, at least for now.

We have a feeling Wichmann piped up yesterday only because of what happened the night before.

As you might have heard, Sen. Sanders held a town hall on Fox News — defying establishment Democrats who denounce appearances on that network as legitimizing fascism or white nationalism or something.

At one point, moderator Bret Baier tried to score some points with the crowd, asking those who have health insurance through their work to raise their hands. “Of those,” he went on, “how many are willing to transition to what the senator says, a government-run system?”

The number of people who kept their hands up and cheered was — well, probably a lot more than Mr. Baier was expecting. Click on the tweet to watch if you missed it…

Bret Baier just polled the Bernie Town Hall audience who would be willing to switch to #MedicareForAll. It backfired spectacularly. pic.twitter.com/dQJ9gfQ137

How things have changed in 10 years. One of the more comical moments during the Obamacare debate in 2009 occurred in South Carolina. A Republican congressman named Bob Inglis was meeting with some of his constituents. One of them was clearly alarmed by the proposal and urged him to “keep your government hands off my Medicare.” Heh…

More than five years ago, our colleague Jud Anglin said in this space that Obamacare was designed to fail, to be replaced by a British- or Canadian-style system. His forecast is looking more and more prescient…

Yes, it’s a silly publicity stunt. And it still gets time here in The 5, go figure.

The burger chain Carl’s Jr. plans to sell a burger that includes CBD — the cannabis ingredient that relieves pain and anxiety without making you high. 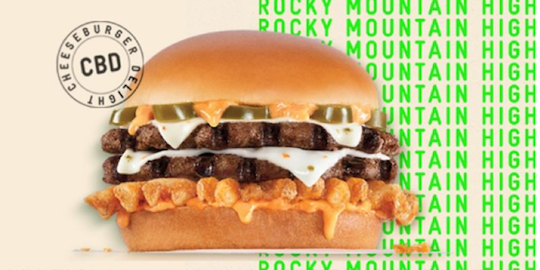 And the sauce will contain a mere 5 milligrams of CBD, “far below the 500 milligrams some experts say is required for it to be effective,” says Bloomberg.

If the whole thing seems like a bit of a, well, nothingburger, it’s for good reason. For the moment, anyway, the Food and Drug Administration prohibits adding CBD to food and beverages — even though CBD became legal on the federal level last December.

“Let’s have a thought experiment,” a reader writes — picking up where he left off Monday on the topic of proposals for “universal basic income.”

“If XYZ Corp. makes a million widgets a year and staffs 100 employees and one of those employees finds a way to double productivity, what if (God forbid) instead of laying off half the staff, a truly inspired set of management actually decided, ‘Hey, why not just let people have a life? We know that we have a stable product demand. Our sales are going to remain the same. Our profits are consistent. Let’s keep everyone at full salary and let them work five-hour days. We’ll still save on overhead because we can cut the lights and equipment 40%, and good God, don’t you know these people are going to be loyal??’

“I can promise you that the gains would be so much more. Because not only are those employees going to be really, really happy, but that company will have their pick from the cream of the crop for any future positions they might need to fill. And don’t you know happy people are even more productive and more creative? And, oh my God, what if our entire economy started thinking this way? It almost brings tears to my eyes to consider the potential.

“But I don’t think anything like this will ever happen here, I’m sad to say. Some small Asian country or something, maybe. The Establishment is too, well, established. And all those productivity gains lining their collective pockets are just too tempting. They will kill the goose laying the golden eggs for one really tasty feast. Which brings us to the universal basic income.

“There will not be work for the masses. It’s just that simple. We don’t need massive labor pools. And many have neither the will nor the disposition to be self-employed or own a business. It’s not for everyone and it isn’t easy. If it were, everyone would be doing it already. The writing is on the wall, though, for all to see. Those in the ivory towers know that either they will put a large portion of the populace on the dole or they risk total societal collapse. Hungry people tend to get violent.

“Not that a UBI will stop the inevitable. It will only prolong it. But I don’t think that there will be many other options until we can come up with a better economic system than we currently have established. (There is one… a true free-market… but we can’t have that now, can we?)”

P.S. Did you miss the reminder about how we’ve applied a credit to your account of $608.25?

You can click here to learn how to claim it.