“How would you like to wake up to a 3,351% overnight profit?” says our income specialist Zach Scheidt — and we can only assume his question’s rhetorical.

That was the scenario last Friday for investors who own shares of Anadarko Petroleum (APC) when the company agreed to Chevron’s (CVX) $33 billion buyout deal. Per the agreement, Anadarko’s U.S. shale and African liquefied natural gas concerns would come under Chevron’s purview.

According to Bloomberg: “The takeover puts Chevron neck and neck with the oil and gas production of Exxon Mobil Corp. and Royal Dutch Shell, both of which have dominated Big Oil over the past decade.

In the deal’s aftermath, lucky “traders who owned the April $47.50 call contracts saw their position jump,” says Zach. Into the stratosphere. “That kind of gain can turn a $500 investment into $17,256 in a single day…

“When it comes to buyout deals,” Zach says, “things happen fast! Typically, these deals are announced overnight when the stock market is closed.”

The Chevron-Anadarko deal was announced “between Thursday’s close and Friday’s open,” he notes. And “the news took Wall Street by surprise, sending APC’s shares skyrocketing 35%. 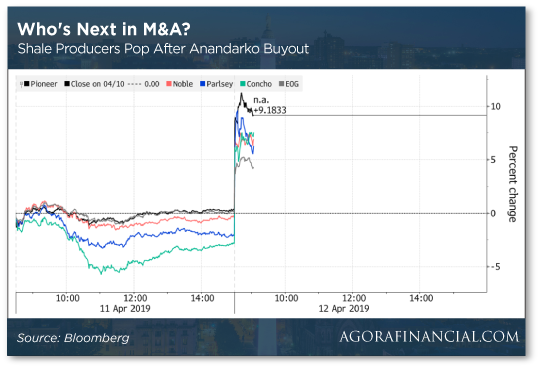 “The U.S. oil market can be broken into two major categories,” he continues: “There are traditional oil drillers, who have been producing oil from standard wells for decades — major companies like Chevron, Exxon Mobil, Royal Dutch Shell and BP.

“And then there are the newcomers,” says Zach, “drilling for oil by fracturing (or ‘fracking’) shale oil rock formations. These smaller companies use tech advances to pull oil out of areas that were previously thought to be too difficult or too expensive to reach.

“As new technology has lowered costs for shale drillers,” Zach says, “these smaller companies have become the envy of the energy market.

“Profits have jumped, and the entire global oil market is now adjusting to absorb the new supply coming online from shale formations.

“Chevron’s $33 billion buyout deal signals that the traditional oil companies are ready to jump into the shale oil business and lock in their own portion of the profits from this market.

“And they’re likely to make similar moves — buying out other shale oil drillers — to keep up with Chevron.

“That’s why a number of… shale oil drillers traded higher on Friday even though they weren’t part of the Chevron-Anadarko deal.”

Zach says, “Investors now expect new deals for other companies in the market.”

[Ed. note: “Anadarko,” says Bloomberg, “had long been rumored as a takeover target for the world’s largest oil companies.”

Even still, Wall Street was taken off-guard… that’s how quickly these deals move.

To take advantage of Zach’s predictive market service, he’s added a $608.25 credit to your account… but it’s only available through April.]

Even though the mainstream media are in a tizzy… 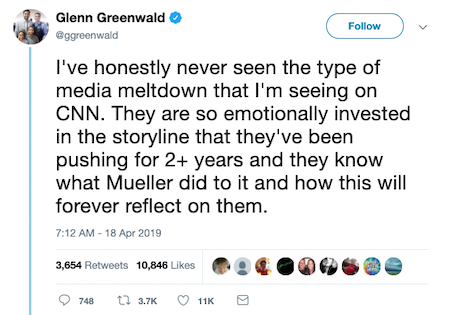 We got a surprise number today: “Retail sales soared 1.6% last month,” says MarketWatch, the “biggest gain in 1½ years.” That beat wonks’ expectations of 1.1%.

Most notable? “Sales of new cars and trucks rose 3.1% — the best performance this year — to give the broader retail industry a boost. Auto receipts represent about one-fifth of all retail sales.”

“Pot stocks kicked off to a great start in 2019.” says Agora’s pot stock expert Ray Blanco. “Over the course of Q1, the North American Marijuana Index rose over 29%.”

Let that sink in…

Compare that with other major indexes so far this year:

Healthy averages all… “But they pale in comparison to 29%… gains for the marijuana sector,” says Ray.

“You should consider this a preview of what’s to come for the legal cannabis market for the rest of the year.”

Ray says, however: “It’s important to note the gains won’t all come at once and the path up won’t always be a straight line. In fact, we’re facing some strong sideways action in pot stocks right now.”

Here’s what you need to know…

Global marijuana spending is accelerating exponentially — projected annual revenue could quintuple over the next decade. “Long term,” Ray says, “there’s no better place to be than in the marijuana industry.

“But today many folks are most likely seeing their holdings dipping.”

“Revenue is shooting up… but we’re also seeing many marijuana companies burning through cash like nobody’s business.”

[Just in: Speaking of M&A, we read this morning about an interesting deal Canadian company Canopy Growth has struck to acquire American Acreage Holdings for $3.4 billion.

What makes the deal so interesting is the buyout will only go through if and when marijuana achieves federal legalization in the U.S. Until then, the two companies will operate autonomously… although Acreage will have access to Canopy’s proprietary weed blends in the meantime.] 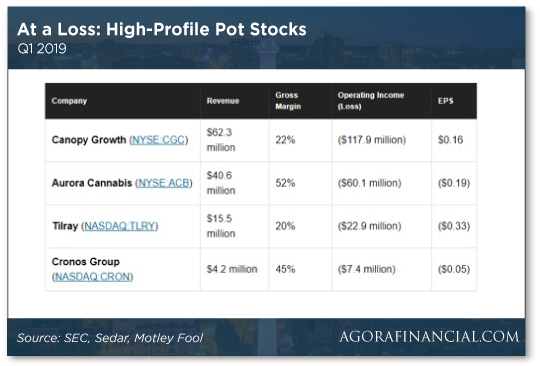 “The moral of the story is choosing pot stocks today is a lot more complicated than just throwing a dart at the wall and making money,” says Ray.

That’s why we rely on Ray’s expertise and insight; to wit, he’s got an update on a hot marijuana play to consider…

The wave of marijuana legalization on the East Coast and in the Midwest last year put one cannabis company squarely in the crosshairs for Ray: “Green Thumb Industries (OTCBB: GTBIF) is a leading medical cannabis cultivator perfectly positioned to create a lasting foothold in these new regional marijuana markets,” he says.

Ray suggested taking a flyer on Green Thumb in December… “And man,” he says, “did it turn out to be a great hedge for the winter sell-off. Since then GTBIF shares are up a whopping 61%.”

Ray expects a lot more upside for GTBIF since the company has a growing presence (heh… literally) in new legal-weed states Massachusetts and Michigan.

“Green Thumb is in on the ground floor,” he says, “and a lot of… revenue from these markets is not realized yet.”

As for analysts’ expectations: “Back in February I noted Beacon Securities analyst Russell Stanley put his new price target for GTBIF at C$44.00 (US$33.20),” says Ray.

That’s “a potential upside of over 130% for Green Thumb shares since we mentioned jumping on this stock back in December.”

Good to note: GTBIF isn’t one of Ray’s official recommendations; he suggests due diligence and homework for potential investors.

With that said, “I expect many more profits for GTBIF owners this year,” Ray concludes. (Want more of Ray’s picks? Look here.)

“Under President Trump’s new tax law, 60 of America’s biggest corporations paid $0 in federal taxes in 2018, despite earning billions of dollars in profits.”

Despite the 2017 Tax Cuts and Jobs Act (TCJA) cutting corporate tax rates from 35% to 21%, apparently that wasn’t enough. “In total, the 60 companies paid no federal income tax on $79 billion in U.S. pretax income,” Fox Business says.

“And instead of paying $16.4 billion in taxes at the 21% corporate rate, the companies received a corporate tax rebate of $4.3 billion.” (Emphasis added.)

On the list of offenders — er, companies? Netflix, GM, Chevron, JetBlue, IBM and U.S. Steel… Perhaps most notable: The No. 1 beneficiary — far and away — is the newspaper publisher Gannett, with a negative tax rate of 164%.

P.S. Your account has received a $608.25 credit opportunity for the month of April.

Click here now see how to claim your discount credit before it expires on April 30.