Racing to the “Flipping” Phone

“What is the better way to watch Sebastien Loeb fly by you on a hillclimb stage in his 2013 Pikes Peak record-setting Peugeot?” asks Bradley Brownell at auto-centric website Jalopnik.

“While watching this awesome video of awesome Loeb and his awesome [Peugeot],” he continues, “my eye was drawn to the man standing on driver’s left of a right-hand bend, looking at his tiny cellphone screen. 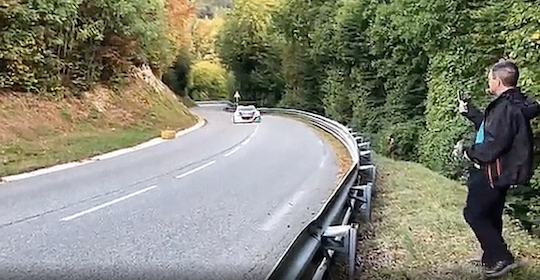 “Not only is this an obviously bad place to position yourself from the standpoint of safety, but ooh boy that video is going to be bad,” Brownell concludes.

“What’s he going to do, pull it out at the pub later to show off the three-second clip to his buddies…?”

Probably not, considering the bystander’s got a flip phone…

Once upon a time, the flip phone was derided as a relic — generally an un-smart device you embarrassedly squirreled away in your pocket.

Thing is, the flip phone had its good points. 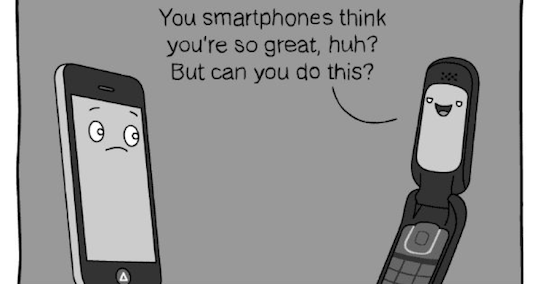 For one, it actually fit in your pocket. Two? When angry, you could snap it shut to “hang up” on someone. (Of course, nothing beats the satisfaction of slamming a handset into its cradle.)

Now the flip phone’s being dug out of technology’s junk drawer; in other words: Everything old is new again…

“With mobile phone sales stagnating over the past several years,” says Robert Kiyosaki, best-selling author of Rich Dad Poor Dad, “the prominent names in the space need to shake things up…

“Now the big tech guys are battling to be the first and superior name in a new mobile technology innovation: the foldable smartphone.”

The race is on for an average-size smartphone (not a mini-tablet monster) that can actually fit nicely in a pocket. “We’re talking about taking a rigid medium — the TV, computer and phone screen — and creating something that can seamlessly be folded in half,” Robert says.

“Like everything in tech,” he continues, “a marketing term called ‘first-mover advantage’ is on the brains of all mobile developer CEOs.

“Being first gives a company the chance to establish strong brand recognition and customer loyalty before competitors enter the arena,” Robert says.

And to the victor go the spoils — the first company to make a go of a foldable phone gets to set the standard price.

So being first comes with fringe benefits:

But there’s a downside — to the upside — of being first, Robert says…

“First… competitors waiting in the wings can copy and improve upon a first mover’s product, creating a better version of what they’re selling and capturing all those who were slow to buy, or willing to go through the efforts of switching brands.

“Plus,” Robert continues, “the companies that follow after the first mover can learn from the first mover’s marketing, production and delivery mistakes, creating better campaigns, services as well as product value.”

What’s worse is first movers often cut corners in efforts to get a product to market… but not focusing on the details costs first entrants dearly when a company’s reputation is on the line.

A good example of a company cutting corners — to its own detriment — was the Samsung Galaxy Note 7, released in 2016. Samsung’s answer to Apple, the Galaxy Note 7 was hyped as having a “better screen, superior camera, faster processing and longer battery life than the Apple iPhone.”

But the wheels fell off the hype machine when the Galaxy Note 7’s battery started spontaneously combusting (in a manner of speaking); Samsung tried to contain the disaster by offering customers a free replacement phone, including a battery made by a different battery maker.

The upshot? The replacement phones — with new batteries — started catching fire, too.

A snafu if there ever were one. All proving “no company is invulnerable to a prolonged PR disaster like this,” Robert says, and “as their investigation into the explosion problem stated, it was all… caused by a rush to release an updated version of the phone.”

“They have already begun presales of their new Galaxy Fold phone. And they’ve allowed the press to see, touch and use the product for review.” 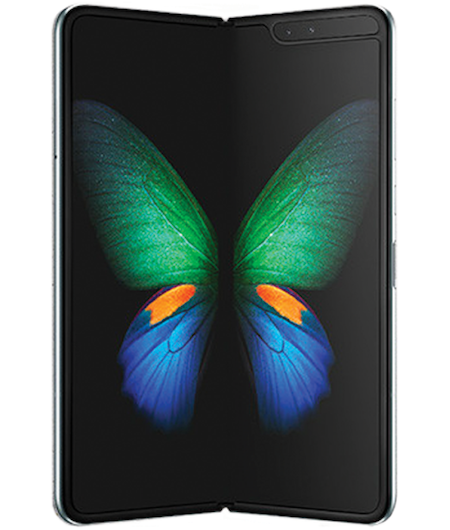 Early reviews are decent… but the phone’s not without tics; for instance, “You can still feel the crease when you unfold the phone into a larger tablet size,” Robert says.

If you’re interested, the Samsung Fold was scheduled to go on sale Friday for a smidge under two grand at $1,980.00; but yesterday, the company announced the release date’s TBD.

Officially, Samsung says it wants to work out all the kinks. Unofficially? Corporate execs are probably experiencing Galaxy Note 7 flashbacks — pressured to get things exactly right.

Still, Samsung’s the frontrunner… but the company’s not alone. Huawei has its own pricey foldable phone in the works and we’d be naive to think Apple doesn’t have something up its secretive sleeve.

But it’s the “last major player that… is both a surprise and the most important one to me for investment,” says Robert. And he’s not betting on this company, he’s betting against it.

The way he sees it, the biggest — and perhaps only — advantage this company has going for it is simple: nostalgia.

But Robert believes nostalgia won’t win the day; in fact, beyond the trip down memory lane, this company’s more a case of What have you done for me lately?

“What I’m saying is that when you consider the players involved, there are frontrunners and there are long shots.” According to Robert, when it comes to foldable phones, this company’s the longest of long shots.

So as an investor, how can you best exploit winners… and losers?

“Have you ever known that a stock was on the verge of collapsing,” Robert says, “but other than buying a put option and paying a premium, you had no way to take advantage of the trade?

“Believe it or not,” Robert says, “there is a way to trade without paying the premium… and without the unlimited upside risk if you are wrong.”

Robert shares all the details here… (and you’ll benefit most if you move on this before tomorrow, April 24).

“Without much fanfare,” he says, “a barrel of light crude has jumped more than 2% to kick off the new trading week, climbing above $65 for the first time since early November.”

Not to mention last week marked seven straight weeks of closing in the green — the longest oil hot streak since 2014.

The U.S. government’s crackdown on waivers previously issued on Iranian oil to “gas guzzlers” like China, Turkey and India might have a little something to do with oil’s comeback.

“While the news is certainly boosting oil’s price,” Greg says, “it’s important to note crude has marched steadily higher lockstep with the stock market since it bottomed in late December.” 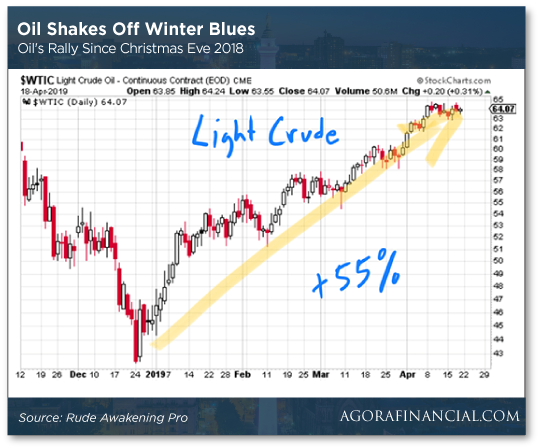 What a difference four months makes… oil bottomed out on Dec. 24 to $42 per barrel. Since? Crude’s rallied 55%.

The current gold-silver ratio is at its highest point in three years: 84 — meaning it would take 84 ounces of silver to buy one ounce of gold.

According to the U.S. Census Bureau, sales of new single-family houses in March were at a seasonally adjusted annual rate of 692,000 — that’s up 4.5% since February and the steepest one-month increase since November 2017.

“One thing that helped boost sales: lower prices,” MarketWatch says. “The median price of a home sold in March was $302,700, 9.7% lower than the same period a year ago.”

Not surprising, they report: “Action is needed by Congress to alter the financial trajectory of Social Security and Medicare; otherwise those programs will face a financial shortfall which could require dramatic cuts in benefits in the future,” says The Atlanta Journal-Constitution.

That said, Social Security trustees figure they have enough thumbtacks and chewing gum to hold the program together in its current form through 2035 — again, a year later than they projected in 2018.

It makes legislation just a touch less urgent since we last tackled the topic — appropriately enough — on the Ides of March.

The article from 1981 — with the headline “Changing San Francisco Is Foreseen as a Haven for the Wealthy and Childless” — was written by UC Berkeley’s Dr. Kenneth T. Rosen. (Incidentally, when the article was written, the average price of a home in San Francisco was $129,000 — high by ’80s standards.)

Dr. Rosen wrote: “Ten years from now, unless we adopt some sort of policy to insure income integration, we will crowd out all the middle-income people.

“I think San Francisco is going to become a very rich living area, a lot of single and retired people who have money, executives who work down in the financial district.

“It’s going to be very difficult for a nonwealthy person to live here,” he said.

“Rosen… may not have hit the mark within his 10-year window, but time has borne out his vision,” says SFGate.

“The 2020 census will likely show further erosion of the middle-class despite a gradual increase overall in population,” says SFGate.

That whole childless thing? “Today San Francisco has the lowest percentage of children of any of the largest 100 cities in America, according to census data.”

San Franciscans must be watching too much Netflix… heh.

P.S. Have you heard the big news?

An opportunity this Wednesday, April 24, could put thousands into your bank account.

Or using any risky options strategies.

In fact, I bet you’ve never seen anything like this before.

Learn how you might be a big winner this week.