The White House’s Imaginary Energy Prices (Not Yours)

It’s come to this: The White House is trying to wish away higher oil prices.

On Monday, we noted how crude prices leaped 3% to six-month highs… after the Trump administration said it was done issuing waivers to nations that buy oil from Iran. Effective a week from tomorrow, anyone purchasing Iranian oil is at risk of U.S. sanctions. About 1 million barrels a day of crude production will come off the market.

The national average price for a gallon of regular unleaded gasoline is up to $2.87 this morning, according to AAA. That’s a jump of 24 cents in a month. Moreover, that price is nearly a dime higher than it was at this time a year ago — with demand only going higher as the proverbial “summer driving season” begins in another month.

White House economic adviser Larry Kudlow is in denial. “I don’t see any palpable impact. The world is awash with oil,” he said yesterday at the National Press Club in Washington.

Kudlow must have missed the latest report from the International Energy Agency, issued Monday. Global supply in March totaled 99.2 million barrels a day — down from 102.3 million in November. The only saving grace is that global demand is flat, thanks to a slowing economy in Europe. 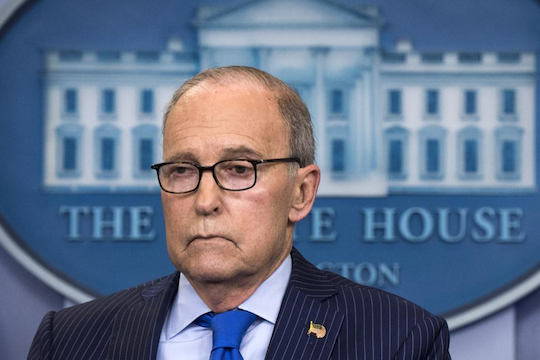 We’ll have to add “no palpable impact” to Larry’s long list of greatest hits. (Our favorite: “The recession debate is over… The Bush boom is alive and well,” he said in December 2007 — which turned out to be the official starting point for the worst recession in at least a generation.)

Savor the irony: Presidents often get the blame for rising energy prices even when those price rises occur for reasons outside a president’s control. But in this case, the buck really does stop at the Oval Office.

The White House is weighing the interests of major Trump donors who loathe Iran — like the casino magnate Sheldon Adelson and the hedge fund manager Paul Singer — versus the interests of the American driving public.

For the moment, anyway, the donors are winning out. Sucks to be you.

Then again, you can offset those rising fuel prices with a well-chosen investment or two in the energy sector.

“This week could be the start of the next big push for energy investors,” says our Zach Scheidt. That’s because starting tomorrow morning, a clutch of energy companies will deliver their earnings numbers and outlooks.

“Energy titan Hess Corp. (HES) will release its earnings report before the market opens tomorrow,” Zach tells us. “The company’s management team will then host a conference call at 10:00 a.m. EDT where they will be sure to discuss their views on the future price of oil as well as the company’s outlook for profits the rest of this year.

“And then on Friday morning, Exxon Mobil (XOM) and Chevron Corp. (CVX) will post their earnings before the market opens. The investor conference call for XOM starts at 9:30 EDT and the call for CVX is scheduled for 11:00 EDT.

“These three earnings reports will set the tone for the entire energy complex,” Zach goes on.

“Think about the companies that not only produce oil and natural gas, but also the service companies that supply the drilling rigs, and the pipeline companies that transport oil and gas away from the wells. You’ve also got refiner companies that are currently locking in big profits from selling gasoline and diesel fuel at high prices. And even specialty companies that provide sand and water for the ‘fracking’ process.”

[Just in: Shares of Anadarko Petroleum (APC) are going ballistic again. Last week they shot higher after APC accepted a friendly takeover offer from Chevron. Now Occidental Petroleum (OXY) is stepping in with a hostile takeover offer… and APC is up 12% on the day. Bidding war!]

“And everyone along the way will see profits continue to climb through the summer.”

[Ed. note: Zach’s publisher just delivered a bombshell with a 90-second video he’s released. Wait till you see what’s in it for you.

As long as we’re talking about rising prices thanks to the actions of Washington, D.C.… let’s talk about electricity.

By mid-July, the White House will decide whether to impose tariffs or import quotas on uranium. Uranium provides the fuel for 19% of America’s electric power. Nearly all of the uranium consumed in this country — 94% — comes from overseas.

Last year a couple of domestic uranium miners filed a petition with the Commerce Department — demanding that nuclear power companies acquire 25% of their uranium within the United States.

The tariffs or import quotas would go a long way toward achieving that result. They would also drive up uranium prices in the United States bigly — far higher than levels seen the last three years, at least. 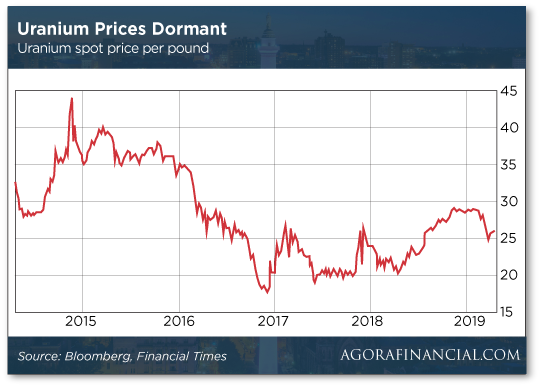 And it would be insult added to injury for the operators of nuclear power plants, according to the Nuclear Energy Institute. “Even without the increased costs associated with the proposed quota, U.S. nuclear plants in competitive markets are under extreme financial pressure,” said the institute in a study last year. “In most markets today, nuclear generators are either unable or barely able to cover their total fixed costs of operation.”

Meanwhile, have you tried to buy a washing machine lately?

As you might recall, last year the Trump administration imposed tariffs on imported washers — hoping to throttle Korea-based Samsung and LG while doing a favor for Michigan-based Whirlpool.

New research from the Federal Reserve and the University of Chicago finds the typical price of a washer rose $86 last year as a consequence — reversing several years of decline. But that’s not the only price borne by consumers. Turns out manufacturers seized on that increase as an excuse to jack up the price of dryers as well, by an average $92.

“Given that many consumers buy these goods in a bundle, the price increases were partially hidden by raising the price of dryers,” U of C researcher Felix Tintelnot tells The New York Times. “That’s very clearly visible.”

The economists acknowledge the tariffs resulted in 1,800 new American jobs. But the costs are astronomical — about $817,000 per job, the researchers reckon.

Hey, at least it’s not as big a boondoggle as Obama’s “Cash for Clunkers” program a decade ago — which cost $1.4 million per new job while making cars less affordable for the masses.

The major U.S. stock indexes are inching higher today — with the S&P 500 and Nasdaq pushing further into record territory.

The Dow still has about 1% to rise before setting records again. Two of the Dow 30 stocks reported earnings this morning: Caterpillar beat expectations while Boeing managed only to match expectations. BA disclosed it’s already taken a $1 billion hit from the global grounding of the 737 MAX.

We’re a bit tardy in urging you to keep a close eye on your pocket change this week: You might end up with something worth a lot more than face value.

As part of National Coin Week, collectors and coin dealers are dropping collectible coins into circulation all over the country — Indian head pennies from the 19th century, wheat pennies from the early 20th, Buffalo nickels, silver dimes, Eisenhower dollars.

The U.S. Mint is getting in on the act as well, with new-issue “America the Beautiful” quarters bearing a “W” mint mark because they were stamped at West Point. (Some are fetching $40 on eBay.) 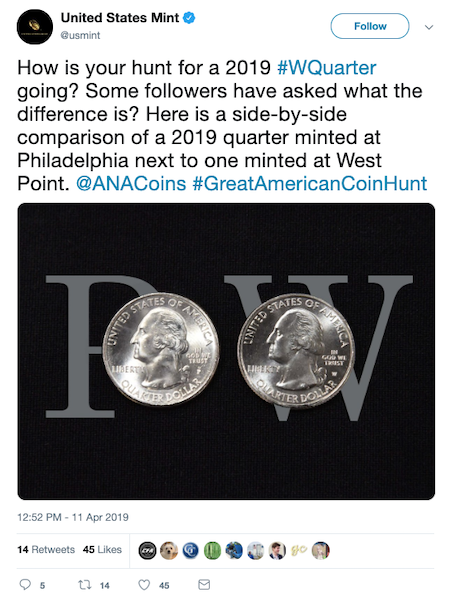 “The Willy Wonka-type stunt, sponsored by the American Numismatic Association (ANA), is being billed as the biggest coin drop in American history,” reports the South Florida Sun-Sentinel.

“It’s going to be coin dealers like myself getting kids interested in the hobby,” Boca Raton dealer Gary Tancer tells the NBC affiliate in West Palm Beach.

Also going into circulation are what CoinWeek describes as “250 specially marked holographic medallions. If these medallions are found, treasure hunters will be able to redeem them for actual numismatic rarities at participating coin shops across the U.S.”

As a lapsed coin collector, your editor can say only, “Cool!”

After we drew parallels yesterday between “foldable” smartphones and the flip phones of days gone by, we heard from one of our regulars…

“As the proud user of a very un-smart flip phone — a 3G giveaway that I’ve used for five years, since my last obsolete phone was sunsetted — I can assure you these are still derided as relics. And I love every minute of it.

“My friends and colleagues bust my chops about this thing regularly, as if I’m supposed to be embarrassed by the fact that I have it. They are disappointed every time!

“Flip phones have many good points, in addition to the ones you mentioned Tuesday. Two more that come to mind: They’re harder to ass-dial, and there’s a chance (albeit a slim one) that Big Brother isn’t using them to track our every move and thought.

“So I say bring back the ‘foldable’ dumb phone. Everything old is indeed new again. Perhaps one day the ’80s-style brick will even make a comeback.”

The 5: You don’t realize how trendy you are.

A couple of years ago, there was a flurry of media stories about celebrities who prefer old-school mobile phones — everyone from Warren Buffett to Rihanna.

“In an age where everyone seems glued to their smartphone,” said a 2018 story from the Tribune newswire, “the flip phone is turning into a statement of protest and individuality. These relics of the 1990s, still in wide use as disposable ‘burners’ by crooks and FBI informants, are prized by a wider population for their simplicity, durability and affordability, not to mention their low-tech appeal to the burgeoning #DeleteFacebook crowd.”

Ironically, your cheapskate editor — who resisted the smartphone lure for years — finally threw in the towel about six months ago and got an iPhone SE (the itty-bitty one) on closeout.

And if you do your homework, you don’t have to pay through the nose for data you don’t need…

P.S. Last week was a great week for readers of our Amplified Income service. They had a chance to collect gains of 167% and 510%… from trades they laid on only a month earlier.

Want in? All it takes is a three-minute phone call… as you’ll learn at this link.