“In terms of float, low can be the way to go when it comes to trading penny stocks,” says our penny stock trading authority Tim Sykes.

Tim’s not talking this kinda float… 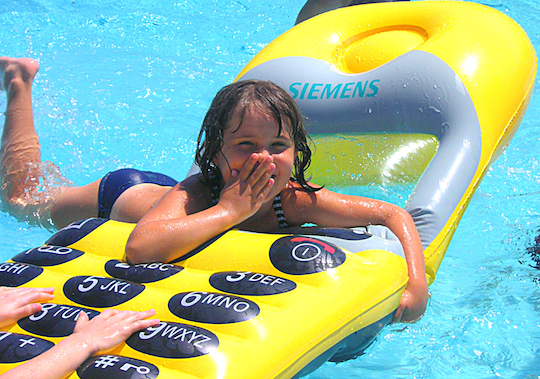 In terms of the stock market, float is the number of shares available to the public for trading.

“Low-float stocks tend to offer lots of volatility,” Tim says, “which means that they can spike in big ways that can potentially net you profits.

“But before you can understand low-float stocks,” he says, “you need to understand a little something called shares outstanding.”

Shares outstanding means all shares of a company’s stock, including shares held by retail investors, “restricted shares” held by company officers and blocks of shares held by institutional investors.

“If you’re looking at a company’s balance sheet,” says Time, “you can find the number of shares outstanding listed by the heading ‘Capital Stock.’

“So there are the shares outstanding, which include the restricted shares that wouldn’t readily be available to traders like you and me,” Tim says. “Then, there’s what’s called the ‘float.’

“The float refers to the number of shares that are freely available for trading,” says Tim.

If a company has a soaring number of shares outstanding but most are held by corporate execs — restricted — then there aren’t a lot of tradable shares available to retail investors. The stock, then, is said to have a low float.

“Here’s the thing about low-float stocks: They don’t have a ton of supply,” Tim says. “This means that any catalyst that causes demand (or lack thereof) will have a larger effect on the shares that are available.”

Plainly said, low-float stocks are volatile… and that inherent volatility can lead to rapid movement up or down.

“Since there are pretty few available shares,” Tim says, “the supply and demand can be impacted quickly and drastically based on news (good or bad).”

Because of this, these stocks are vulnerable to traders’ “short and distort” antics, so due diligence is key; check the company’s fundamentals and technical analysis and “dig deep to determine the validity of press releases and news.

“Adding to the risk factor,” says Tim, “low-float stocks are more common for micro- or small-cap companies. These companies aren’t as established as large-cap companies and tend to have more volatility and risk….”

So… the good news? “Just about everything that makes low-float stocks risky also makes them potentially rewarding as well,” says Tim.

“Because these stocks can have big moves, as a trader you can grab potential opportunities if you can predict or get ahead of the trend.

“While news is generally a catalyst for movement in a low-float stock,” he says, “if you’re intelligent about keeping watchlists, conducting both fundamental and technical analyses and identifying hot sectors, you can potentially benefit.

“There are two key indicators that you should check before trading low-float stocks,” Tim says.

The number of shares bought and sold during a given period of time is a stock’s volume. “It is an overall important indicator to use as part of your technical analysis because it can help you determine the strength of the price movement of a given stock within a given time period.

“When a price moves, the bigger the volume, the bigger and more meaningful the overall move,” Tim notes. “This is particularly true for low-float stocks.

“So when looking at low-float stocks, be sure that they have sufficient volume before getting into a trade.”

NEWS CATALYST… because “when a juicy news catalyst hits,” says Tim, “it can strongly impact the price of a stock.

“How can you use the news to your advantage?” he says.

“First, be sure to research the catalyst to see if the news ‘has legs.’ Cut through the… self-serving PR statements and try to find the real scoop yourself.”

And a caution about rumors… Tim says: “Rumors can move a stock price, but you shouldn’t necessarily trust them!”

To that end, support any pertinent stock news with earnings reports and charts to try to anticipate obvious patterns. “If you’ve identified a strong news catalyst and can back it up with research,” Tim says, “it’s a key indicator that a low-float stock could be moving in ways that could offer trading opportunities.

“Now that you have some basic knowledge about low-float stocks,” Tim says, “how can you put it to work?”

A good question that many of our readers have already answered by using Tim’s strategies to secure their retirement accounts, pay off debt or just augment income.

Maybe you’d like to join in but fear you lack the experience to succeed… and you don’t want to risk your hard-earned money.

Be one of the few to follow Tim’s advice: Do your homework on low-float, fast-moving stocks for quick profits — all with his expert guidance.

Even a small stake can equal big profits… Check out this one-minute clip here.

Oil’s price — that had been on quite a hot streak this week — is down 4% after President Trump said he got OPEC on the horn and told them to rein in fuel costs.

The Commerce Department issued its first guess at first-quarter GDP this morning. The “expert consensus” rang in at 3.2% — a better reading than last quarter’s 2.2% — and definitely better than the expected 2.3%.

The biggest drivers behind the number?:

But not — apparently — for some consumers…

As first-quarter earnings season gets underway, our analyst Greg Gunner takes a look at a big winner: “Amazon.com doubles first-quarter profits,” he says.

“Jeff Bezos & co. have turned the entire retail industry on its head and rendered more than a few brick-and-mortar department stores obsolete,” says Greg. “But seeing the numbers in black and white can still take your breath away.” 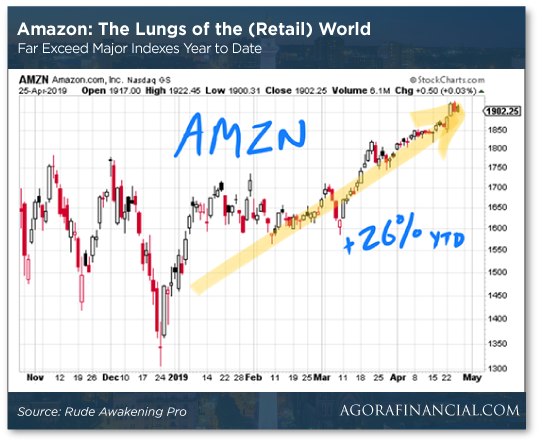 Amazon doubled profits for the first quarter of the year with earnings per share coming in at a jaw-dropping $7.09 compared with analyst expectations of just $4.71. The online retailer increased revenue by 17%.

“While some analysts worry that Amazon’s growth has slowed,” Greg says, “management’s guidance is in line with expectations and the stock has posted a meaningful recovery over the past six weeks.”

Shares are up more than 26% year to date.

“Morgan Stanley lied about the risks of its products and put profits over teachers and public employees who relied on its advice,” says California’s Attorney General Xavier Becerra.

That said, one of the world’s leading investment banks settled a 2016 lawsuit filed by now U.S. Sen. Kamala Harris.

The suit — brought by two large California pension funds — claimed Morgan Stanley hoodwinked fund managers into believing iffy mortgage-backed securities were safe, this back in the days leading up to the global financial meltdown. Ahh… memories.

“The bank was also accused of failing to remove poor-quality loans from those securities, and hiding the risks because disclosure could become a ‘relationship killer’ prompting lenders to send future business elsewhere,” says Reuters.

The settlement’s just a drop in the bucket, unfortunately; according to the LA Times, CalPERS, for example, is still only 68% funded.

So we’ll just chalk the legal win up to a moral victory. On second thought: “Morgan Stanley denied wrongdoing,” and “a spokesman said the accord is the New York-based bank’s last regulatory settlement related to the financial crisis.”

Nothing like a clean slate, right? Well, there’s a clean conscience… heh.

Time to turn on, tune in and drop out? Here’s a blast from the past…

A groovy, man, Timothy Leary wristwatch circa 1970 is up for auction on eBay — and does it ever give new meaning to the aphorism “It’s 5 o’clock somewhere.” 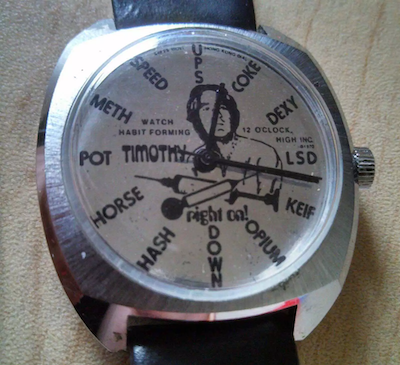 Sheesh… when is it “overdose o’clock”?

In regards to the unusual watch, the eBay seller says: “The watch works and it’s obviously been used.” Obviously… whoever owned this watch used!

“It has some minor scuff marks in areas” — just like the aging hippy who might have owned it — “but is still a great piece… nonetheless.”

“Thank you,” says a long-time reader, “for the follow-up on why and who Trump may be placating with Iranian sanctions.

“It’s one thing when you have crazy dictators of failed nations like ‘Rocket Man’ recklessly (even if they think it strategic) launching missiles and openly threatening to nuke the U.S. But it’s surprising to hear statements like ‘nuking Iran first’ to make sure they know we are serious from folks on the U.S. side.

“Surely the adults know how quickly and irrevocably bad this could turn out?

“It shouldn’t amaze me anymore, but…”

The 5: But… who said anything about adults?

“The government showed its hand with the Tax Bill of 1986,” says a reader from the Lone Star State, “when with the stroke of a pen, Reagan wiped out 30% of the then-market value of commercial real estate.

“Prior to that time, new tax measures always grandfathered prior commitments. With this outright lie, I realized it was game over and to never, ever trust government laws again.

“I and several friends had an inkling of what the new tax bill would contain so we loaded up on multiyear tax write-off investments. We still had to make our annual payments but did not receive the intended tax benefits until we individually sold our respective investments many years later.

“Bottom line? You can now count on the feds screwing up IRAs and HSAs. Bet on it!”

The 5: A timely, historical reminder that if it happened once — er, more than once — it can certainly happen again.

About how he made his millions…

Watch this one-minute clip before it comes down.