“I feel like I’ve just released a new record or a book or something,” says Canopy Growth CEO Bruce Linton. “I’m running around the [media] circuit to try and explain it,” he continues.

The agreement’s unorthodox in that it depends on the U.S. legalizing marijuana at the federal level within the next seven years. Beyond that, “Acreage and Canopy Growth shareholders will need to approve the terms of the deal at special shareholders meetings scheduled for June,” Yahoo Finance reports.

“And at a federal level,” Linton says, “it’s so easy to do in a way that would keep everyone happy.” From his lips… to John Boehner’s orange-ish ears?

You might associate marijuana company Acreage Holdings with John Boehner, who joined the company’s board a year ago — “ending a career-long stance against marijuana during his time as a politician,” says our pot stock authority Ray Blanco. 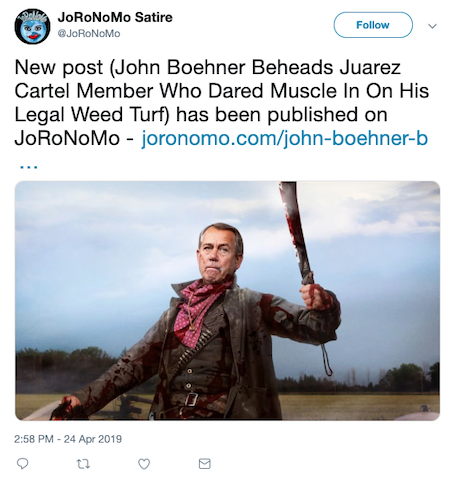 Turns out aside from the shareholder vote in June and the issue of marijuana’s federal anathema status in the U.S., the Canopy-Acreage deal comes with another hitch. Legally speaking, “They’re not allowed to do it,” says Ray.

“A while back,” he says, “Canadian exchanges made the decision that since cannabis remains illegal at the federal level here in the U.S., any Canadian pot companies with stateside operations would be in violation of their listing requirements.

“In other words, Canadian pot companies had to either get rid of their U.S. operations or risk being delisted,” says Ray.

“That’s kept U.S. and Canadian pot opportunities relatively separate until now,” he says. “And it’s why the Canopy/Acreage deal is so interesting…”

To end run restrictions, the agreement was structured so Canopy has the option to purchase Acreage upon federal legalization. In the interim, Canopy plays by the rules — it has no U.S. pot holdings.

But to lock down the rights to buy Acreage, Canopy dropped $300 million for the privilege. “It’s a deal the company was unlikely to make unless it had a pretty good hunch that pot would become federally legal in the U.S. in the very near term,” says Ray.

And — for better or worse… but in this case better — Acreage comes with the high-profile endorsement of John Boehner along with his political connections.

“Republicans want to keep the national discussion about a thriving economy and roaring stock market heading into the election — not fighting Democrats on an issue that the majority of Americans now support.”

Bottom line: “The Canopy/Acreage deal has some very interesting implications for the whole industry,” Ray says.

[Ed. note: Are older Americans like John Boehner “getting high” in record numbers?

But you don’t have to be in a legalized state to legally get HUGE pot profit chances from the markets.

Simply click here to see how a small stake could turn into an absolute fortune.]

What? Google… not transparent?! Google (Alphabet) reported a revenue miss on earnings late Monday. To be clear, revenue was up 17% for the first quarter of 2019… but down 9% from the same quarter last year.

And Google was dinged for more than just declining revenue: Analysts at JP Morgan found the company’s report lacking: “We believe frustration around GOOGL’s lack of transparency will only increase.”

As for the earnings miss? Flagging ad revenue’s to blame. “Advertising sales increased 15%, compared with a 24% growth rate a year ago,” says CNBC.

“This quarter will no doubt result in a reset to forward expectations, particularly for the ads business, as investors search for reasons for the fairly meaningful deceleration,” says Mark Kelly of Nomura Instinet. “We expect the stock to trade sideways….”

Google shares are down about 8.5% at the time of writing.

“There’s good reason to believe confidence will remain high,” says MarketWatch. “Stock prices have retouched record highs, interest rates and inflation are low and wages are rising at the fastest pace in almost a decade.”

For consumers, the economy appears to be working on all cylinders, something expected through the summer months.

The FOMC meeting is underway with a decision on interest rates tomorrow.

Jim Rickards calls to mind the word “patient” in the statement (from the last meeting on March 20) is a Fed code word. It means that the Fed will not raise interest rates at the next meeting.

It also assures banks and dealers that the Fed will not raise rates until the first meeting following the absence of the word “patient” at the earliest. Jim says this was the pattern the Fed adopted in March 2015 when they dropped the word “patient” and subsequently raised rates in December 2015.

As long as the word “patient” is in the Fed’s statement, Jim says, traders have an “all clear” signal that they can do leveraged carry trades without fear of a short-term rate hike. Once the word “patient” drops out of the statement, market participants are on notice that rate hikes could come as soon as the next meeting. That’s a “risk off” signal to get out of carry trades before it’s too late.

Jim concludes: Not only will the Fed not raise rates tomorrow, but they will almost certainly include the word “patient” again, which means markets have an all clear “risk-on” signal at least until the next FOMC meeting, on June 19.

“White House chief economic adviser Larry Kudlow told reporters Monday that President Trump is unlikely to pay off any of the national debt, currently at $22 trillion,” say the Washington Examiner.

This after Trump said four years ago he would eliminate the national debt “over a period of eight years.” Easy peasy, Trump claimed. The silver bullet? Renegotiating very bad trade deals with the likes of Mexico, China and Japan.

And that was when the national debt was only $19 trillion deep. Today? It’s in the region of $22 trillion. 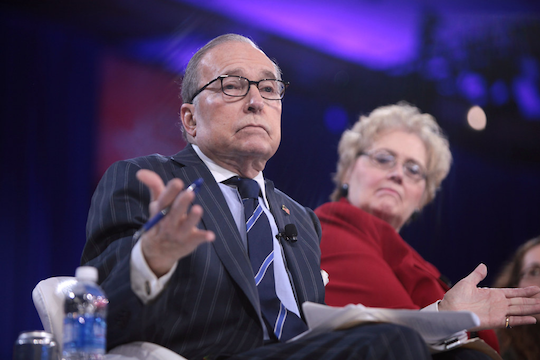 So sue me! The White House isn’t paying down the national debt.

To wit, chief economic understater Larry Kudlow reluctantly conceded: “Yes, [the national debt’s] gone up a bit,” but he argues, “growth is the solution to any debt issues that might be on the table — and so far, so good.” (*Gulp* Isn’t that just another way of saying “fingers crossed”?)

“You may remember a few weeks ago when Chevron Corp. (CVX) made a $33 billion buyout offer for shares of Anadarko Petroleum (APC),” says our buyout authority Zach Scheidt.

“Before the first [Chevron] deal was announced, APC was trading near $47,” says Zach. After Occidental made its bid, APC closed at $72. “That’s more than a 50% gain this month alone!

“Sometime in the next two weeks,” he says, “I expect to see a new offer from Chevron, which will likely send shares of even APC higher.

“That’s what happens in a bidding war. Buyout offers keep getting higher until one competitor finally throws in the towel,” says Zach.

Hold the phone: “Warren Buffett is getting involved in [this] rare bidding war unfolding in the energy industry,” says CNBC.

“Occidental is focused on Anadarko’s acreage in the Permian Basin, the U.S. shale oil region stretching across western Texas and southeastern New Mexico.”

Anadarko says it’s kicking around both offers. In the meantime, Chevron points out Anadarko’s already signed on the bottom line; if the energy company backs out of the deal, Anadarko owes Chevron a $1 billion breakup fee.

And — in case you’re wondering — this is not a satirical headline from The Onion… but it might as well be. 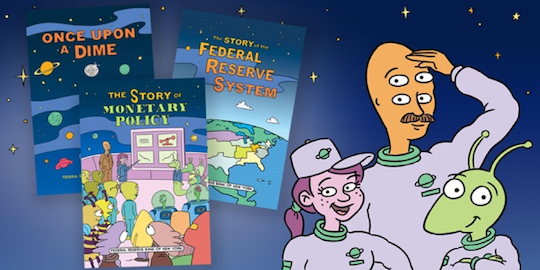 What multiple eyes you have… “The better to forecast inflation with.”

According to its website: “The New York Fed has published comic books since the 1950s and is reintroducing this popular series with a modern spin.”

Where’s the modernist spin here? Are we missing something? Looks like a gang of wannabe Trekkies to us, stowaways on the S.S. Patience… heh.

If you’re wondering, Fed comic book retreads include these spine-tingling titles: The Story of Monetary Policy, The Story of the Federal Reserve System and — our favorite — Once Upon a Dime, which “focuses on the concepts of barter, currency and banking.”

“While the comic books are intended for a student audience, they are also available to the public.” Perfect reading before bedtime…

P.S. Are you a brave American ready to strike on a hidden market opportunity? Like taking 150% gains on DIS options in less than three weeks!

(If this does not sound like you — please don’t waste your time.)

However, if you’re someone who’s unafraid to take action and “break the rules”… You have a once-in-a-lifetime chance in front of you.

If you have what it takes…

And you’re ready to take action, click here now to get all the urgent details before MIDNIGHT.