It’s Time to Get Boring

And he’s speaking our language…

At The 5, we’ve been cautioning readers that we are, indeed, at the tail-end boom phase in a boom-bust economic cycle. 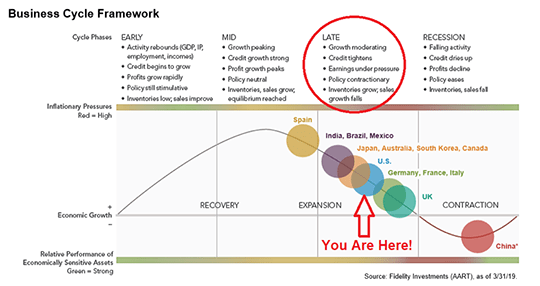 “As you can see from the illustration… above,” Mike says, “analysts clearly place the U.S. economy in the late phase of the current expansion, along with most other global economies.

Meaning? “Growth is slowing, credit conditions are tightening and earnings growth is coming under pressure.”

“That said, this bull is getting pretty long in the tooth,” says Mike. “The current economic expansion is already the second-longest in history.”

In light of which, Mike warns the next economic downturn… 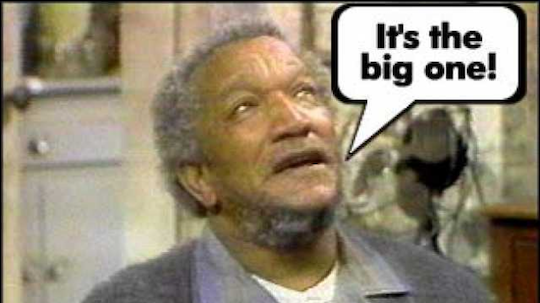 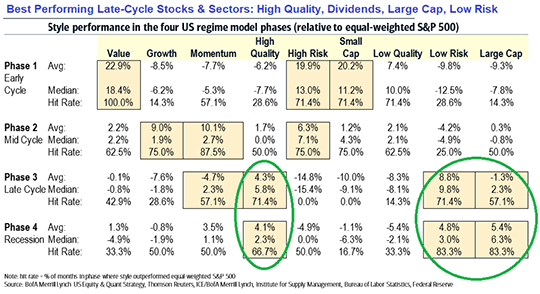 In other words, to recession-proof your portfolio, optimal stocks are:

“These are exactly the types of stocks,” says Mike, you should be “loading up on… and for good reason.”

“Right now [P&G] is breaking out above a trendline,” says Bill Baruch of Blue Line Futures, “going all the way back to 2000.” 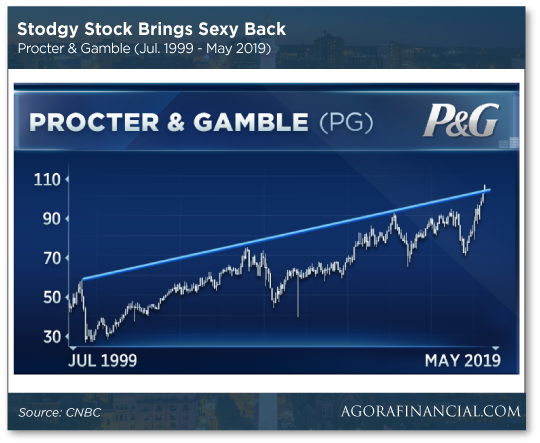 On a monthly basis this year, P&G has broken through its $107 per share resistance level. And the stock’s indicative of the consumer staple sector at large.

Following a severe correction in December, Consumer Staples Select Sector SPDR Fund (XLP) is up 7.2% so far this year… not radical growth but in line with what you might expect from low-risk, defensive stocks — especially during a downturn.

“These are the kind of stocks likely to beat the market from here on,” Mike concludes. “And these quality companies can also save you from losing a bundle of money during the next recession.”

[Ed. note: If you want to amplify your gains, Mike has identified a way to do just that — adding as much as $383,515 to your retirement funds.

It starts with a quick three-minute phone call… as he explains when you click here.

It’s NOT IMPOSSIBLE to add as much as $383,515 to your account. In fact, if you can place a short three-minute phone call to a toll-free number…

You could be at your cabin in the mountains, enjoying your new multimillionaire retirement lifestyle.

You can do this!

“The Federal Reserve identified rising sales of risky corporate debt as a top vulnerability facing the U.S. financial system, according to a report released Monday,” says an article at The Wall Street Journal.

For the second time in six months, officials alerted about corporate leveraged loans — “a $1.1 trillion market that the Fed said grew by 20% last year amid declining credit standards.

“Specifically, the Fed warned a downturn could expose vulnerabilities in U.S. corporate debt markets, ‘including the rapid growth of less-regulated private credit and a weakening of underwriting standards for leveraged loans.’”

If the stock market’s any indicator, a last-ditch effort for a Friday trade deal with China appears to be improbable… the Dow’s reeling, down 400 points to 26,026.

From traditional to nontraditional assets: Two brokerage firms are breaking into crypto…

“First,” says Kamal Ravikant at Altucher’s Crypto Trader, “E-Trade is getting ready to support bitcoin (BTC) and ethereum (ETH) on its platform.”

Next up: Ameritrade is launching a dedicated crypto division. “Most importantly,” Kamal says, “odds are that Ameritrade will launch an in-house bitcoin exchange.”

This means big things for crypto: “Rather than deal with wallet addresses or private keys,” he says, “E-Trade and Ameritrade users will have the opportunity to handle crypto directly through a normal brokerage account.”

[Beyond Meat update] African swine fever — that’s taken 5% of the global pork supply off the table (ooh, boy) — might have you rethinking plant-based meat substitutes.

American-based Tyson Foods — an early investor in Beyond Meat — is benefiting from the deadly outbreak in more ways than one. “This is an unusual, perhaps unprecedented time for the protein industry,” says Tyson CEO Noel White.

“In my 39 years in the business, I’ve never seen an event that has the potential to change global protein production and consumption patterns as African swine fever does.”

The outbreak will certainly push prices of the other white meat higher… but might also lead consumers to “Eat Mor Chikin” and (sorry, Chick-fil-A cows) more beef, too.

And Tyson’s looking to rival the new IPO Beyond Meat…

Hedging bets all around, Tyson says “it will roll out its own plant-based meat substitutes beginning this summer,” according to CNBC.

“The U.S. meat substitute market is worth about $1.44 billion, according to Euromonitor International data. By 2023, the market is expected to grow 74% to $2.5 billion,” CNBC reports.

And while the number of vegetarians and vegans in the U.S. has remained static over the last decade, more Americans are trying to limit meat consumption.

A market Tyson’s looking to capture before upstart Beyond Meat does.

This day in gold’s history: “It was called one of the worst investment decisions of all time,” the BBC says.

“Twenty years ago [today], then Chancellor of the Exchequer Gordon Brown said he was selling tonnes of Britain’s gold reserves.” And (bad?) timing’s everything — it was almost the absolute bottom of gold’s 20-year bear market.

Not that Brown didn’t have his naysayers: “There were plenty of people warning against the move at the time — including at the Bank of England,” says the BBC. 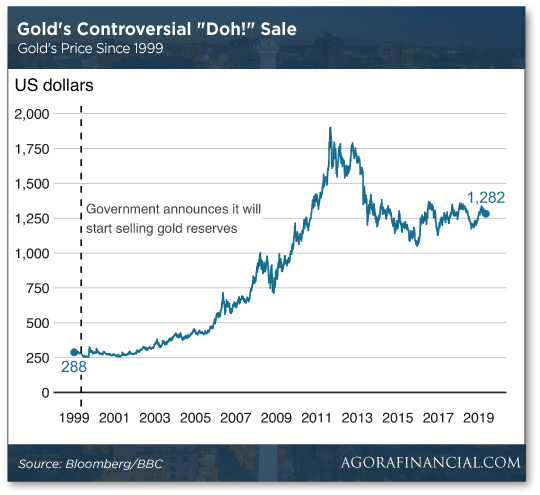 “The circumstances of the U.K. sale fueled a belief that a modern economy no longer needed to hold huge gold reserves (an argument that still persists today),” says the BBC.

It sent the signal that holding bullion — “as a store of value and useful hedge against inflation” — was becoming a thing of the past.

A sentiment outlined in a May 1999 New York Times editorial titled — and we kid you not — “Who Needs Gold When We Have Greenspan?”

The article declared: “Dollarization… amounts to a sort of a gold standard without gold.” (Or, looked at another way, the de-dollarization of the dollar, no?)

“In other words,” the BBC notes, “Federal Reserve Chairman Alan Greenspan and the U.S. dollar were the new backstop.

“The article did caution, though, that this could all change ‘if it turns out that central bankers are not the geniuses they are now deemed to be.’” Aaand… hindsight puts to rest the “genius” supposition.

But reports of gold’s death were greatly exaggerated…

“Regardless of its price on any date,” says Rhona O’Connell of Intl FCStone, “gold is negatively correlated with virtually all other asset classes and from a central banker’s point of view it is important in terms of adding international credibility within the financial sector.”

An idea supported by the following: “Purchases by central banks in the first three months of 2019 were the highest in six years as countries diversified away from the dollar,” according to the World Gold Council (WGC).

Which, of course, goes along with what The 5’s been saying about de-dollarization for a couple years…

The biggest gold buyers? You got it… China and Russia.

A reader’s piqued by something Dave said yesterday: “We’re half-expecting, sometime, a demonization of gold as something only traitors would possess.”

“This is an intriguing thought,” our reader says, “I will continue to stack bullion, although I’m curious: What does it say about a government that claims to own over 8,000 tons of the stuff?

The 5: Among gold bugs there’s a rather infamous exchange going back to 2011…

MR. PAUL: Do you think gold is money?

MR. BERNANKE: No. It’s not money; it’s a precious metal…

MR. PAUL: Even if it has been money for 6,000 years, somebody reversed that and eliminated that economic law?

MR. BERNANKE: Well, it’s — you know, it’s an asset. I mean, it’s the same — would you say Treasury bills are money? I don’t think they’re money either, but they’re a financial asset.

MR. PAUL: Well… why do central banks hold it if it’s not —

MR. PAUL: [Chuckles.] Well, some people still think it’s money. I yield back. My time is up.

Even former Fed Chairman Alan Greenspan — who was supposedly beyond gold (see above) — said in November 2014: “Remember what we’re looking at. Gold is a currency. It is still, by all evidence, a premier currency. No fiat currency, including the dollar, can match it.”

P.S. If you take these three simple steps right now…

You could retire as early as THURSDAY, May 9.

This could completely change your life…