Today’s 5 Is Not About Pot

“You can’t have people show up high. But just because someone uses pot recreationally doesn’t mean it will impact their work,” says Joel Morgan from Goodwill Industries of Southern California — which trains workers for 200 small and midsize businesses.

“Many California companies face a shortage of qualified workers,” the paper points out. “Legal marijuana is making hiring even harder for those who take a strict stance on screening for drugs. So, increasingly, they’re not testing — or ignoring some of the results.”

Even in states where recreational weed remains illegal, employers are easing up — like New York. From The Buffalo News: “Two employment agencies, Acara Solutions and StaffBuffalo, say they have recommended the elimination of cannabis testing to employers as a way to expand the pool of candidates without sacrificing quality.”

For more than a year now we’ve been telling you how “quality of labor” is the biggest problem facing small business.

Surveys from the National Federation of Independent Business routinely reveal a stark reality: Good help is hard to find.

Under those circumstances, why let a positive test for weed get in the way of an otherwise perfectly qualified hire?

Of course, abandoning weed testing isn’t the only way companies are attracting and retaining the best talent in a tight labor market.

“Another way,” says our Zach Scheidt, “is by offering great benefits.”

Which brings us to a highly successful trade Zach recommended to some of his premium subscribers in recent weeks — involving a company that helps employers offer better benefits. The trade delivered 257% gains in just over a month. Wait till you see how Zach sniffed it out… and how you could reap similar gains in the very near future.

[Betcha thought we were winding up to another pitch for pot stocks. Heh…]

We’re talking about a company called WageWorks (WAGE). At the time of Zach’s recommendation on March 28, it had a market cap just shy of $1.5 billion.

“The company’s specialty,” he explained to his readers, “is helping firms offer employee benefit programs like health savings accounts as well as specialized benefits like transit and parking.

“Those programs are in high demand right now, thanks to the strong job market. WageWorks is capitalizing on that demand, bringing in new customers and growing profits.”

A week ago yesterday, news hit that WAGE was the target of a buyout offer from one of the top HSA providers in the country, HealthEquity (HQY). As you likely know, a buyout offer is usually a very profitable catalyst. Certainly it was in this instance. 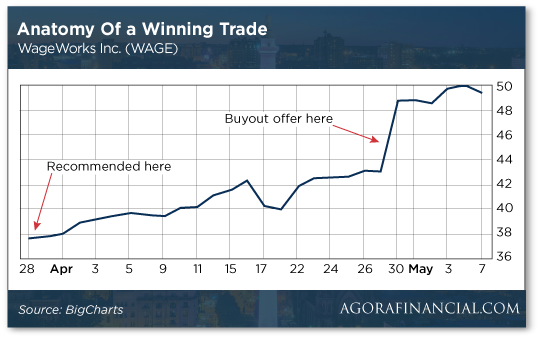 Remarkably, Zach sniffed out that deal a month in advance — not only before the offer was made public but even before the suits at WAGE got the offer.

Zach relies on a proprietary market barometer he calls the “One Day Bonus Indicator” — because in the space of a day, a trade can deliver returns comparable to that of a Wall Streeter’s annual bonus.

“During the week of March 25,” he explains, “my One Day Bonus Indicator alerted me to an unusual number of WAGE options contracts changing hands.

“Some research quickly confirmed why it might be happening. Here’s a timeline for what happened next:

So how did Zach’s indicator spot this offer-in-the-works even before WageWorks executives got a phone call?

“Our One Day Bonus Indicator constantly scans the options market,” he explains, “looking for unusual activity. In late March, someone knew that a deal was going to be made for WAGE.

“And whoever had this information must have placed an options trade that would generate a big return when shares of WAGE moved higher.”

Who, you wonder? “Maybe it was an executive from HealthEquity. Maybe it was a lawyer or analyst helping HealthEquity put the paperwork together. Or maybe one of these people accidentally let word slip at a cocktail party or a ballgame — and a friend or relative decided to cash in on the tip.”

But it doesn’t matter: “Our indicator doesn’t identify who makes these unusual trades. Only that someone is placing a big bet in the options market, and doing it in a way that is difficult to track.

“Thankfully, that’s all we need to know to profit from these deals.”

Don’t feel bad if you missed out. Zach is confident there’s more where this came from. As long as the economy stays strong, “buyout deals are one of the best ways for big companies to expand their reach and grow quickly,” he says. “So I expect to see many more deals like the WAGE buyout happening in the near future.”

Which means you too could be set up soon for a lucrative One Day Bonus.

The trade war freakout is over for the moment and the major U.S. stock indexes are scratching out slight gains.

At last check the Dow, the S&P 500 and the Nasdaq are all up between a quarter and a third of a percent. The Dow, for its part, is back above 26,000. Before the market open, the president confirmed that China’s Vice Premier Liu He — more or less the Middle Kingdom’s economic czar — will head to Washington for more trade talks before the end of the week. 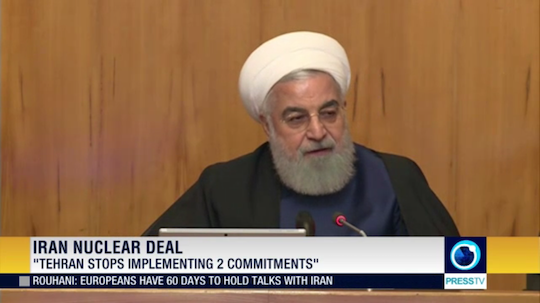 Specifically, the Iranian government says it will stash the uranium it enriches inside Iran — rather than selling it overseas and then buying back only as much as needed to fuel its nuclear power plants. Not a huge breach of the Iran nuclear deal, but enough to express frustration on the first anniversary of Donald Trump pulling Washington out of the deal altogether.

Meanwhile, Washington has deployed B-52 bombers to the Persian Gulf in addition to the aircraft carrier USS Abraham Lincoln.

“It’s high time we had a major change in how we view the causes of Alzheimer’s disease,” says our Ray Blanco on the science-and-wealth beat.

Ray points us to research just published by Dr. Stanley Prusiner from the University of California, San Francisco.

“Now Dr. Prusiner has published research on Alzheimer’s disease. He says it shows ‘beyond a shadow of a doubt that amyloid beta and tau are both prions, and that Alzheimer’s disease is a double-prion disorder in which these two rogue proteins together destroy the brain.’”

Finally, an alternative to the old and busted “amyloid plaque” hypothesis that says Alzheimer’s is just the brain equivalent of gunk clogging up your arteries. This year alone, that hypothesis has resulted in two massive failures in clinical trials. “We’ve spent billions on Alzheimer’s research,” Ray reminds us, “with nothing to show for it but a handful of drugs that don’t really change its course once it sets in.”

Ray is on the case of a company that’s already pursuing the prion hypothesis. He’s also following a company whose research could up the ante — wiping out not only Alzheimer’s but most of the diseases of aging.

The Ex-Im Bank, as it’s known, guarantees loans to foreign companies and governments so they can buy airplanes from Boeing, power equipment from General Electric and so on. You, dear taxpayer, assume the risk if the borrower defaults… while Boeing and GE are assured of their payday.

As a candidate, Donald Trump opposed Ex-Im as a crony capitalist boondoggle. But once in office, he started calling it “a very good thing.” (Barack Obama performed an identical flip-flop.)

Here’s the latest from economist Veronique de Rugy, writing in The New York Times: “For nearly four years the Senate leadership blocked confirmation votes to fill the vacancies on Ex-Im’s board, depriving it of the quorum needed to authorize deals over $10 million. Sadly, Senate Republicans, led by Mitch McConnell and with the help of nearly all Democrats, are expected to end their blockage this week by confirming Kimberly Reed as the head of the bank and two other nominees to the board.”

Underscoring her dismay, Ms. de Rugy adds, “Fools like me who believed that President Trump would ‘drain the swamp’ in Washington have been enduring one disappointment after another.”

Heh… Best stick to The 5’s long-standing policy with politicians: When you keep your expectations low, you don’t get disappointed.

“I just wanted to express my confusion as a first-time investor,” reads an email of the sort we’re used to seeing from time to time now.

“I have received about three dozen emails and have not been able to use any of them. When I find something I am interested in, the video goes for such a long time I never get to the end. I do not have 30 minutes to watch a video and then to have to read a confusing sales pitch for another 30 minutes.

“All your information so far has just been sales pitch after sales pitch for more money. I signed up and paid $200 to learn something, not to spend more money. Is there anything you have that is useful and is not going to cost me more money and time?”

“So far I’m not impressed with your newsletter that I bought into for a year,” says another.

“There are too many ways you are trying to make money, since you already know how to do that with almost always pushing another newsletter to purchase or books, videos, etc.

“I was looking at your newsletter as a guide as to how to go about buying into the market at the right time and trying to make some gains that were lost in the 2009 collapse. I’m just a regular person who wants to be able to retire and know which avenue to take.”

Hope that clears it up. If you’re still a little fuzzy, this back issue of The 5 from last year ought to clear everything up. It includes an email address and toll-free number for our customer care team if you have any outstanding questions.