And James speaks from experience. He’s written robo-trading software, managed a hedge fund and run a fund of hedge funds. Along the way, he figures he’s analyzed thousands of companies and investment strategies.

James even went on to write books on his Wall Street experiences… but says, “I can summarize everything I’ve learned in just one basic idea…The best way to make money in stocks is to hold forever.”

James concedes there are millions of sharp people trying to get an edge on the market with inside information, fast computers and big data, but maintains: “I’m telling you what I know from experience.

“The only folks who make millions without these advantages are the ones like Warren Buffett and Bill Gates,” James says. “They’re committed to owning a stock for a long time.”

Warren Buffett hasn’t sold a single share of Berkshire Hathaway since The Monkees’ “Daydream Believer” was topping the charts in 1967. 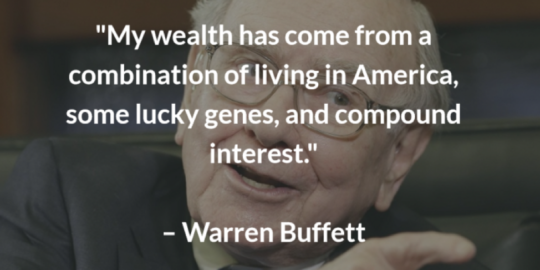 As of December 2018, Buffett’s portfolio is pretty straightforward — only six companies account for 70.2% of his holdings. One of which is his favorite soft drink company, Coca-Cola; the Oracle of Omaha reportedly drinks five cans of the cola every day.

[Coincidentally, Uncle Warren eats breakfast from McDonald’s every morning after opening bell at the NYSE. Market’s up? Bacon, egg and cheese biscuit. If the market’s down, he economizes, ordering a breakfast of two sausage patties.

For lunch… it’s DQ with a sundae. Followed by country-fried steak with the fixins for dinner. And don’t forget the Coke — Buffett prefers Classic or Cherry.

And while the octogenarian doesn’t drink alcohol… he also doesn’t eat his vegetables. Unless potatoes count.

As for the power of compounding, look no further than Coca-Cola. If you’d invested $1 in the company in 1990 — when KO was the undisputed beverage king — in 25 years’ time, that dollar would be worth $15.25. 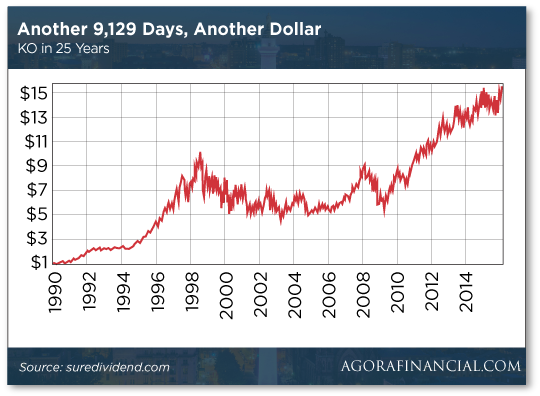 So in that 25-year period, Coca-Cola compounded investor wealth at 11.5% a year, including dividends. So definitely check the box for a DRIP (dividend reinvestment plan)…

“Every great investor will tell you the same thing,” James continues. “They’ve all used ‘compounding’ to make a significant portion of their wealth.

“Compounding involves reinvesting the money you make from an initial investment in order to make even more money.” Allegedly, Albert Einstein called compounding “the most powerful force in the universe”… and here’s proof that it is: 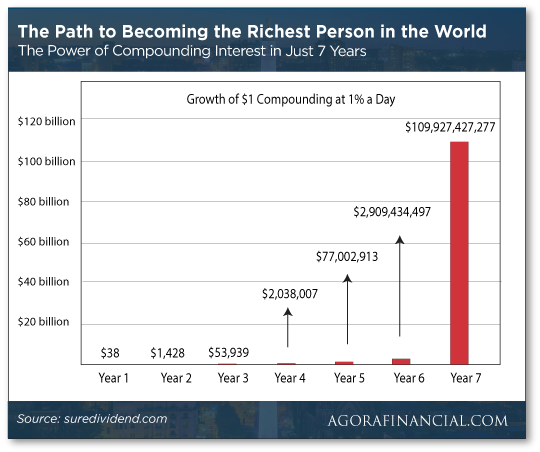 Say you invested $1 that compounded at 1% interest per day. In just five years, your $1 will have grown to over $77 million. By year seven? You’d be the richest person in the world.

(Sadly, this isn’t exactly a real-world example — there are no investments that compound at 1% a day… that we’re aware of.)

Adjusting for inflation, the U.S. stock market’s compounded wealth on average at 6.9% annually. At that rate, money invested in the stock market has historically doubled every 10.5 years.

So what are the characteristics of stocks you should hold? For that, James turns again to Warren Buffett…

And James literally wrote the book on the subject: Trade Like Warren Buffett. Accordingly, James believes Buffett would advise investors to buy based on the following criteria…

If you pick companies that adhere to the above criteria, James says to “keep reinvesting… money [and] the effect multiplies.

“Over a long period, you can earn staggering profits on your original investment,” he says.

[Ed. note: Right now, James is guaranteeing each of his readers the chance to collect up to $36,000 in extra income this year just by following the simple instructions in this presentation.

Just be aware: This clip will be pulled from the internet Sunday at midnight. But before that happens, we wanted to make sure you had a chance see this provocative video.

Click here now to see what’s causing all the trouble. Remember, this gets pulled from the internet Sunday at midnight.]

“The market has been exceptionally forgiving so far this year during the extended snapback rally,” Greg continues. “We’re just shy of all-time highs and a quick pullback is just what the doctor ordered to keep traders honest — trade deal or no trade deal.”

We have to mention, tariffs rose at midnight, talks are still underway and traders are hanging on every tweet and rumor… impossible to recap the minute-to-minute shifts.

This just in: Steve Mnuchin says talks with China were “constructive”… and on that word, the Dow’s trimmed its losses to 133 points at 25,700.

“The most highly anticipated IPO of the year,” says CNN, “had a less-than-stellar reception on Wall Street.”

CNN notes Uber picked a bad day to toss confetti and pop Champagne corks at the NYSE: “The lackluster debut comes as Uber runs up against broader market jitters over an escalating trade war between the United States and China as well as investor concerns about its chief rival and closest proxy, Lyft.”

Today Lyft shares are down about 30% from its own IPO.

The official government CPI numbers show that prices rose by 2.0% year over year through April — the second straight month the annual rate’s risen.

Month over month? CPI is less than expected at 0.3%.

Palladium is back below the price of gold…

Lawrie Williams from the British bullion broker Sharps Pixley reports: “While fundamentals for both precious metals look positive, palladium looks to have been seen to have risen too far too fast.

“[The price of palladium] has also been hit by what seems to be a major global downturn in new automobile sales which has seen… [palladium’s] price dive by over $300 in a month and a half, having peaked at over $1,600 an ounce in late March.”

The London-based gold dealer notes: “Palladium has continued to fall back and is now in the mid-$1,270s. But the gold price looks as if it may be on the up.”

Since the palladium bubble has unquestionably burst, what’s the prospect for the metal? It might drop down to join its “sister metal” platinum, which is priced at $784.77 per ounce today.

“With the FANGs coming off disappointing earnings reports and as fears of excessively high valuations grow,” our income specialist Zach Scheidt says, “the market’s in need of a new leader.”

According to Zach’s research, there’s a new leader emerging — the financial sector.

“Today, we’re seeing financial stocks move up to the front of the pack to carry this bull market forward,” he says. “In fact, as of this past weekend, financials have firmly outpaced the rest of the market — up 6.07% over the past month versus just 3.95% for its closest competitor, consumer discretionary.”

Perhaps most noteworthy, institutional money managers are starting to take large positions in financial stocks — managers with millions of clients’ dollars to invest. As they scoop up shares in the following weeks, these stocks will naturally be buoyed higher — a trend Zach expects to persist for several months.

“These are some of the large-cap names that are currently catching a lot of attention.” And all are looking for redemption after meh 2018 performances. As an added bonus, they all pay outstanding dividends.

“With that list of companies above you can turn the tables [on Wall Street]”, Zach says, “as this sector continues to emerge from the pack and break out.”

This is how much a Tesla fanboy believes in Elon…

“Tesla fans are heralding a video recently posted to Twitter, showing a Tesla Model S driving straight into a flooded street, as proof of the EV’s merits,” says an article at Driving, “while others simply see a driver apparently ignoring all possible signs of danger or thoughts of self-preservation.”

We’re going with the latter… 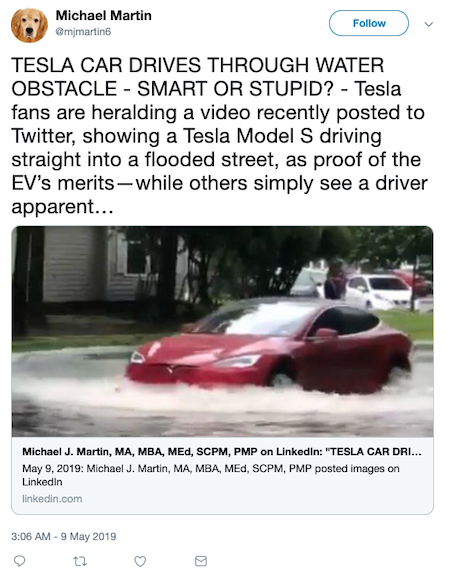 From the video shared on Twitter, you see a Tesla driver navigating through about a foot of standing water on a street. Oddly enough, the video cuts short before we get to see the car and driver make it safely to dry ground. Hmm…

“Electrical connectors are given some water-shielding but the harnesses and components were never designed to be subjected to total immersion.”

“And as water conducts electricity, the risks of shorting out high-powered batteries and circuits are substantial.”

So for all the in Elon we trust folks out there, Driving says: “Don’t be stupid and use your Tesla as a boat. It wasn’t designed for that.”

“Launching a business in America is, indeed, way too difficult,” says a longtime reader. “And as you correctly point out, our health insurance system and self-employment tax are major deterrents as well.

“In my opinion, the problem is (even) bigger than that. The radical liberals’ agenda of regressivism has created a culture where laziness and parasitism are being incentivized and rewarded, while hard work and productivity are de-incentivized and punished.

“Many people now have a bizarre sense of entitlement where they just want to live on the dole. The nonsense and vitriol they’re using to rationalize that mentality are disturbing. MMT anyone?

“Millennials definitely have a bad case of derangement syndrome — but the problem seems to span generations. I’m a baby boomer, and fortunately many of my peers and elders haven’t gone down the rabbit hole. Others have.

“Without a major reset, I don’t think this will end well. I sure hope I’m wrong about that!

“Thanks as always for the great work you and your team do.”

The 5: Our contributor mentions Modern Monetary Theory (MMT)… If the government isn’t constrained by revenue, why should its citizens be?

Have a good weekend.

P.S. To learn about a powerful strategy James uses to generate safe, consistent returns that might make you an additional $36,000 a year, every year — gains that can compound very quickly…

Go here before Sunday at midnight to learn about this super-safe way to collect $3,000 in cash income every single month.