No One Saw It Coming? Really?

The major business headline this morning is a case study in media failure. 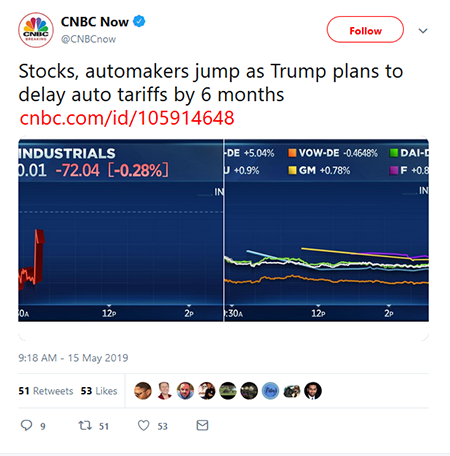 You might not remember, but auto tariffs were huge news a year ago… and then they fell off the face of the Earth.

On May 24 of last year, The Wall Street Journal had an important trade war scoop: The White House had begun looking into imposing tariffs of up to 25% on imported cars and trucks.

The tariffs would be justified on national security grounds under the 1962 Trade Expansion Act.

Maybe that sounds like a reach, but not to the White House. As the Journal reported: “Dan DiMicco, the former Nucor Corp. chief executive who advises the administration on trade, said Wednesday that cars by themselves aren’t central to national security, but he said that the broader manufacturing supply chain that produces cars is important for security.”

(At the time we quipped in these virtual pages about how Switzerland has no auto industry to speak of but has somehow fended off foreign invaders for centuries.)

Fast-forward to this week and the president faced a deadline to make a decision by Saturday — 90 days after the Commerce Department issued its recommendations.

In other words, here we are a year later and until this morning the mainstream follow-up on the story was nearly nonexistent.

We mentioned briefly on Monday how syndicated columnist George Will was on the case. And we saw a smattering of stories from Reuters and Bloomberg, but that’s about it. Even the Journal, which broke the original story, either ignored it or buried it — it certainly hasn’t been a front-page story or even a blurb in the “What’s News” portion of the front page in recent days.

This lack of follow-up is endemic to the news business. Most of the time the media are too busy chasing the latest shiny-object headline to devote the manpower to following up on previous headlines.

News consumers notice these lapses. Back when your editor worked in TV news management, consultants would conduct focus groups and ask people about their biggest frustrations with the newscasts they watch. Lack of follow-up — that nagging sense of “Whatever happened to…?” — was consistently among the top responses.

Result? Unless you were paying super-close attention (or reading The 5!) you got blindsided by this news because you didn’t even know the deadline was looming.

Whatever. At least if you’re in the market for a foreign car, you’ve got more time to shop around now. Rant over…

“The stock market just enjoyed the best four-month start to a year in more than 30 years, MarketWatch notes. A hard reset was in order, regardless of geopolitical risks. The fact that we’re staring down the barrel of the market’s worst start to May since 1970 shouldn’t shock anyone.”

As we said Monday, the key level to watch is 2,800 on the S&P 500. “This has become an important inflection point for stocks since the fourth-quarter meltdown and subsequent recovery,” Greg says — drawing a yellow line on this chart to underscore the point: 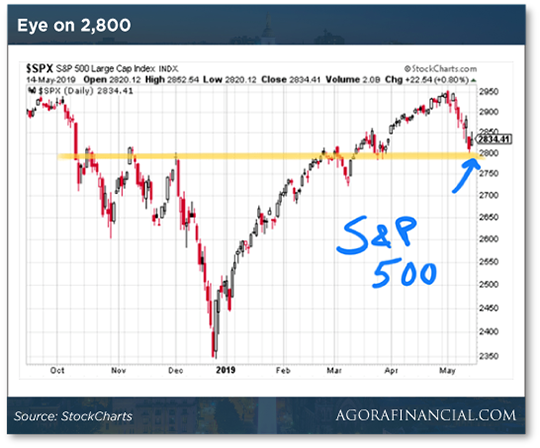 “A strong bounce at these levels will probably lead to a bigger rally,” Greg says, “while failure might trigger the next wave of selling.”

For the moment, the market is bouncing thanks in part to the aforementioned trade headline.

The S&P 500 has pushed past 2,850 at last check. The Dow and the Nasdaq are likewise solidly in the green.

The notable earnings report of the day is Macy’s — which delivered perfectly respectable numbers. But on the conference call with analysts, CEO Jeff Gennette said tariffs on Chinese imports are bound to hit consumers sooner or later: “It will affect a lot of apparel and accessories categories.” With that, M shares are down about half a percent.

With today’s rally, stocks are shrugging off a couple of truly miserable economic numbers just out.

Begin with retail sales — down 0.2% in April, according to the Commerce Department. Not one among dozens of economists polled by Econoday was counting on a number that weak.

And the numbers become more disappointing if you throw out auto sales (which are volatile month to month) and gasoline sales (rising prices naturally drive higher sales totals, which skews the overall number). The “expert consensus” among economists was looking for a 0.4% increase, but in the event there was a 0.2% drop.

But the ugly doesn’t end there: Industrial production tumbled 0.5% in April — in contrast to the consensus expectation for a flat number.

The manufacturing component of the is a worse disappointment — also down 0.5%. Among those dozens of economists surveyed the most pessimistic guess was a drop of 0.1%. The weakness was across the board — auto production, auto parts, business equipment, consumer goods.

Meanwhile, 77.9% of the nation’s industrial capacity was in use during April — not bad by the standards of the last three or four years but still the weakest total since May 2018. 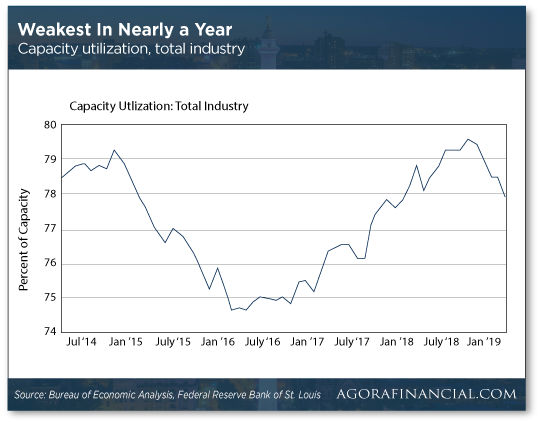 The only saving grace in today’s economic numbers is the Federal Reserve’s Empire State survey of manufacturing in New York state. But that’s only a survey of factory managers’ sentiment — “soft data,” as opposed to actual sales and production figures. 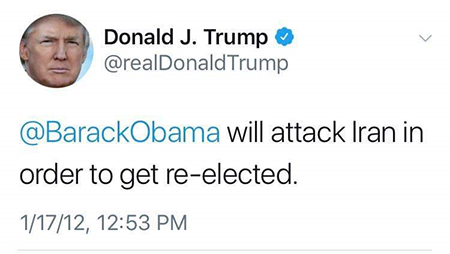 The headline news this morning is that Washington is ordering its “nonemergency staff” in Iraq to leave the country. No reason given, but Iran is the country next door.

But Secretary of State Mike Pompeo and National Security Adviser John Bolton immediately jumped on the incident to blame Iran. “We will not let Iran get away with using a proxy force to attack American interests,” Pompeo told CNN.

What’s more, Pompeo and Bolton used the incident to goad a reluctant Pentagon to start drawing up a list of military options against Iran. Eight months later, Newsweek reported yesterday the most likely option is “a heavy guided missile strike campaign in an attempt to lead Tehran to the negotiation table with Washington.” 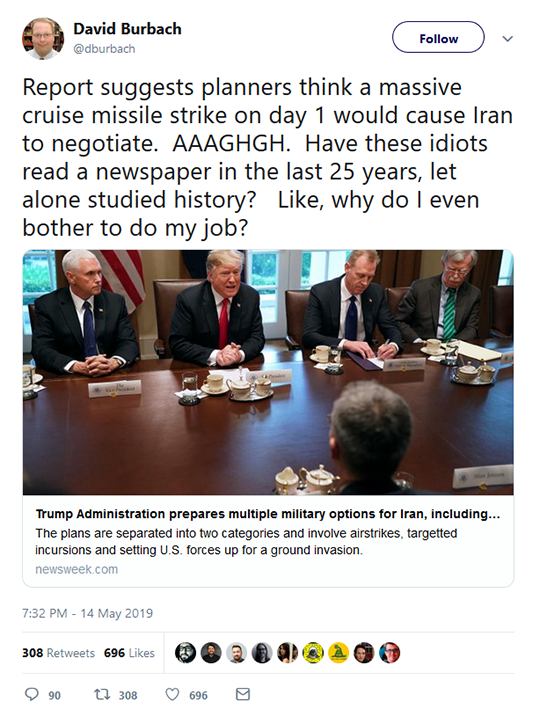 “The specter of war with Iran bears both hallmarks of terrible military adventures,” writes retired Army Maj. Danny Sjursen, a veteran of both Iraq and Afghanistan: “Washington is again overestimating Iran’s bellicose intent and underestimating its capacity to defend itself.

“Make no mistake: War in the Persian Gulf will be bloody, indecisive and nearly impossible to disengage from. It’d be Iraq War 2.0, only worse — since Iran is bigger, more mountainous and has a more nationalistic population than even Iraq.”

Then again, all bets are off if the president up and decides to cashier Bolton — which can’t be ruled out, writes Curt Mills at The National Interest: “Two sources familiar with the matter tell me President Donald Trump’s rumbustious National Security Council chief is headed for the exits, having flown too close to the sun on his regime change efforts for Iran, Venezuela and North Korea. ‘Hearing that Trump wants him out,’ a former senior administration official told me.”

Say this much for all the central bank money printing of the past decade: It’s just helped set another record in the art market. 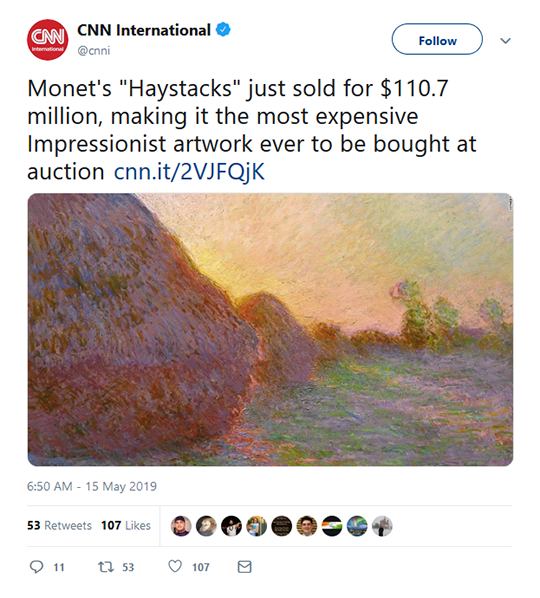 Sotheby’s says the anonymous buyer beat out five other bidders. It’s now the ninth-most expensive work ever sold at auction.

This particular painting in Monet’s “Haystacks” series was last auctioned in 1986 for a mere $2.5 million.

No wonder our Jim Rickards is so fond of fine art as a store of wealth, along with land and gold…

To the mailbag: “Was just wondering if Chinese-organized dumping of its U.S. dollar debt would be part of the plan to ‘set’ the gold price in Beijing when the time comes (fairly soon?).

“Pierre Lassonde just recently on King World News apparently reckons the euro is doomed; taking that into consideration, Germany would get its beloved D-Mark back, but until that time, it makes sense to read reports that Germans have personally amassed a huge amount of gold bullion.

“The last D-Mark issued was a gold D-mark and its issue was severely oversubscribed and sold out in a couple of days, if I recall.

“Having the D-Mark back, however, may not be a blessing for the export-driven German economy.”

The 5: Hard to imagine the People’s Bank of China would ever be so brazen as to explicitly dump Treasuries in favor of gold, if that’s what you’re implying.

The Russians can get away with that — and be totally transparent about their gold accumulation — because they’re a relatively puny economic power. But Beijing has to be more circumspect. That’s why its gold stash is probably at least twice the size of the “official” figure.

As for a return of the German mark, dream on: Jim Rickards has long said the euro is here to stay — not because it’s a monetary project but because it’s a political project. The euro aims to bind the eurozone states ever tighter together.

We know this is true because of what happened with Greece a few years back: The Greek government was forever busting the budget limits set by Brussels… and they always got away with it. Brussels was obviously bluffing — otherwise the Greeks would have gone back to the drachma and immediately devalued. But that was way more than the keepers of the eurozone project would stand for…

“So help me understand,” a reader writes.

“The ‘bad’ tariffs raise the cost 25% and some company in the USA is making the same item for 15% above the pre-tariff China price, so now he sells a ton more. That is bad?”

The 5: You’ve fallen victim to the fallacy the great economic thinker Frédéric Bastiat described as the seen versus the unseen.

What’s “seen” in your hypothetical example is the domestic company that can charge 15% more for its widget because the competition from overseas has been hamstrung. Perhaps the firm might add a shift and employ more people. (Or more likely, given the experience of the last decade, the company would just buy back stock.)

But what’s not seen is the 15% more that consumers pay for the widget — money they would have spent on something else absent the tariff. Or perhaps what’s unseen is that consumers decide to cut back on their widget consumption in light of the higher price and the domestic widget producer is no better off than before.

And don’t forget the importers who fork over the 25% tariff. They pass that cost along to their customers.

That’s how Bush’s steel tariffs in 2002 preserved 3,500 steel industry jobs… but also put as many as 200,000 people in other industries out of work because their employers no longer had access to cheaper imported steel…

P.S. Sometimes our editors go to the ends of the earth to find a good investment idea.

Sometimes they wonder if they’ll ever make it back.

That’s what happened to one of our editors recently.

Fortunately he made it back OK… and what he discovered could change your life forever.