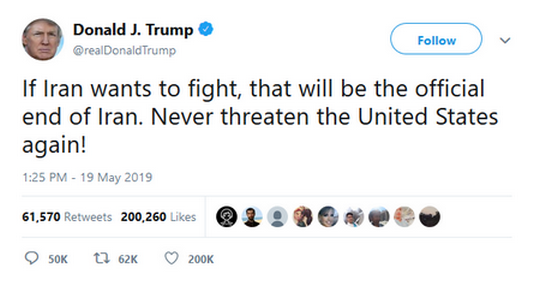 Perhaps you heard about that tweet yesterday or this morning. A few pearl-clutchers on Twitter were aghast at his language, but they have short memories.

The current president is hardly the first American politician to cavalierly threaten the existence of a 2,500-year-old civilization. On the campaign trail in 2008, Hillary Clinton mused about how Washington could “totally obliterate” Iran… while the late John McCain fantasized about “bomb, bomb, bomb Iran” to the tune of a Beach Boys classic.

Strangely, the oil price hasn’t moved much in response to this latest saber rattling.

A barrel of West Texas Intermediate fetches $63 — about the same as it did late last week.

But it’s not the oil price on our minds this morning. Instead it’s a group of commodities we seldom think about — but are critical to modern life, and to U.S. military prowess.

“Rare earth elements,” they’re called. The name is a bit misleading, because these elements exist in relative abundance. There are 17 of these REEs, with funky names like dysprosium, neodymium and ytterbium.

These elements are essential for everything from your mobile phone… to TV screens… to wind turbines… to hybrid car batteries… to guided missile systems.

Mr. Kennedy runs a firm called ThREE Consulting — which as you might imagine from the name specializes in REEs. His clients have included two presidential administrations, Congress and a host of federal agencies — including the Pentagon.

Kennedy says Washington’s supply of “smart bombs” is nearly used up — thanks to the Obama administration’s relentless bombing campaigns in Syria. By the early days of the Trump administration in 2017, the Pentagon was drawing on its supplies stockpiled elsewhere around the world to keep up the pace.

“The Syrian action suggests that even a limited action in Iran would fully deplete U.S. weapons inventories in just a few months.”

“Once these weapons are used up they can only be replaced if China decides to sells us these critical materials,” Kennedy goes on.

So… not very likely, then.

“Withholding these materials would not just neuter our military during a conflict, it would shut down every automobile and aircraft manufacturer in the U.S. The shutdowns would extend to what remains of our electronics and green technology industries. It would be pink slips from coast to coast. China would fill the global demand gap.

“In short, it would snuff out the few remaining embers of our already crippled economy.”

Kennedy’s bottom line: “China is the only country in the world with the capacity to produce the materials required for our defense industry and our economy: There are no alternatives.

“Consequently, China has considerable influence, if not control, over the ultimate outcome of this potential conflict, and it most certainly will be able to dictate the terms that end this trade dispute.”

Kennedy likens this moment in time to a famous movie of a quarter-century ago: “The outcome of a U.S. war with Iran is as predictable as the outcome of the 1997 blockbuster Titanic…

“Is this administration, Congress, our military commanders or the American public going to allow us to board the sinking ship of war with Iran?”

But that’s too deep a question for markets to contemplate this morning: Right now, it’s reacting to the latest trade war headlines.

Google has announced it will bar the world’s No. 2 smartphone maker — China’s Huawei — from many updates to the Android operating system.

Other big movers today include Ford — down half a percent after an announcement that 10% of the company’s white-collar workforce worldwide will be shown the door. That’s about 7,000 jobs total, 2,300 in North America. Not a surprise, really — Ford has been “restructuring” for months to gear up for a new era of electric vehicles and self-driving technology.

The U.S. economy is closer to recession than at any time in the last three years, judging from this morning’s Chicago Fed National Activity Index.

The CFNAI crunches 85 economic numbers to come up with a composite that’s had an almost-flawless record of foreshadowing U.S. recessions for the last 50 years.

Weak manufacturing data and weak consumer spending dragged down the three-month average to minus 0.32 — a level last seen when the economy was limping along in early 2016. 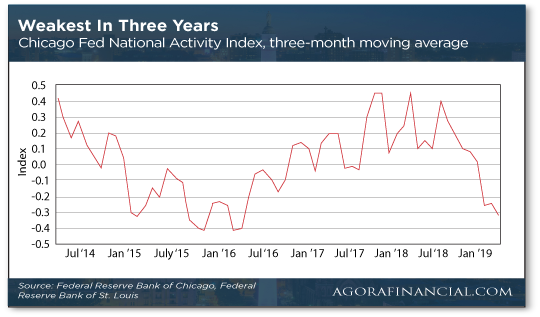 The good news is that we’re still a comfortable distance from the recession threshold of minus 0.70. But the trajectory going back to last summer is, shall we say, concerning…

As long as we’re talking about tight supplies of unusual commodities today, let’s talk about helium.

Perhaps you saw the news a few days ago that Party City is closing 45 stores — in part because it’s having trouble securing a reliable supply of helium for its balloons.

The story has prompted a flurry of other stories about a helium shortage. “Helium is used in MRIs, it’s used in nuclear magnetic resonance and the semiconductor industry uses a lot of helium,” Mark Elsesser of the American Physical Society tells NBC News.

NBC’s somewhat misleading story tells us “The biggest source of helium in the United States, the Federal Helium Reserve, in Amarillo, Texas, is winding down its operations after Congress passed laws in 1996 to take the U.S. government out of the helium business.”

The implication, of course, is that we need government to ensure a steady supply of helium.

The reality — as we last pointed out in 2014 — is that thanks to government, there’s no market price for helium.

The original 1996 law required the entire reserve in Amarillo to be sold off by 2015 — regardless of global supply or demand.

Worse, the law insisted all costs incurred in selling off the reserve be returned to the U.S. Treasury, drawn from the proceeds of helium sales. As of 2013, Uncle Sam had finally broken even on the proposition… and as such, the Federal Helium Reserve was set to shut down, even though there were still 9 billion cubic feet of helium in storage.

So Congress extended the 2015 deadline. The rest of the helium is to be sold off by September 2021 — some of it at auction, but much at an arbitrary price of $95 per thousand cubic feet.

Oy… Back in 2010, we took note when Nobel laureate physicist Robert Richardson warned the world would likely run out of helium by 2035-40. He reckoned the true market price for a helium party balloon would then be $99.36.

Alas, the good professor died in 2013 and we can’t turn to him for an updated estimate…

To the mailbag, and a real-life casualty of the trade war…

“In a meeting last fall,” writes our correspondent, “my employer made the decision to indefinitely postpone several new construction projects. Why? The primary reason given was the cost and availability of steel.

“So electricians, plumbers, drywall installers and all sorts of other tradesmen never showed up to the job sites because there weren’t job sites. Invoking Bastiat, it’s not far-fetched to assume the bored construction workers don’t associate the jobs that didn’t happen with tariffs and trade wars.”

“Not all tariffs are equal and not all cause the same pain,” writes another.

“For example a friend of my friend in New Zealand has been making a killing importing Harley-Davidson motorcycles and reselling them to China for less than China can buy them directly due to the tariffs. In this case Harley is taking the financial hit they thought they would. Of course Beijing could easily enough stomp that down if it wanted to.

“Now, I did notice a certain irony. The biggest claimed issue seems to center around intellectual property theft. Perhaps IP theft would not be an issue if Washington would actually agree to sell high-tech EQ and products to China or at least allow them to license the technologies. There wouldn’t be a need to try to steal them, then, would there?

“I did say ‘irony,’ right? Well, here it is. China is the supplier of the rare earth elements needed to make these high-tech products that they are then not allowed to buy! I wonder what would happen if Beijing grew a pair and decided to ban the U.S. from purchasing any REEs from them? How long would it take for our high-tech manufacturing to grind to a halt, and what would or could D.C. do about it?

“Seems to me that REEs would make a far better nuclear option for China than dumping Treasuries.”

The 5: Credit where it’s due: The reader submitted his letter last Thursday afternoon… and we didn’t get around to reading it until we’d already made up our mind to lead off today’s issue with rare earths.

As Roger Waters once wrote, “Everything under the sun is in tune…”

Xi often does photo ops at Chinese companies. But this one “sends a warning signal to the U.S. that China may use rare earths as a retaliation measure as the trade war heats up,” Yang Kunhe from Pacific Securities Co. tells Bloomberg.

Meanwhile, as the president pours gasoline on the Iran situation, The Washington Post is lighting a match, all but daring him to start a war: “As he moves more deeply into the second half of his term with major foreign policy issues unresolved, Trump’s credibility has suffered, and his options have narrowed.”