Of the 10 states where recreational pot is legal, only tiny, quirky Vermont passed it through the legislature.

“All of the others were passed through ballot referendums,” says an article at Politico, “a much cleaner process because voters can only approve or reject the proposals as written.”

And now it’s almost time’s up on the legislative process for what was expected to be a watershed year for recreational marijuana legalization — particularly in New Jersey and New York.

But Illinois is one heavily populated state that just might squeak through recreational marijuana legislation before lawmakers adjourn in less than two weeks.

“We think we’re getting close,” says Illinois state Sen. Heather Steans. “We’ve been working on this two years. It’s been a collaborative process with many stakeholders at the table.”

Umm… as to that whole “stakeholders” thing? “Freshman Gov. J.B. Pritzker’s budget plan is counting on pot to generate an estimated $500 million for the cash-strapped state,” Politico says (emphasis added).

But Chicago’s outgoing mayor Rahm Emanuel warns: “Don’t go headfirst into this just because we’re thirsty and hungry for revenue.”

In New Jersey, recreational marijuana’s three-bill legislation has failed to rally support among moderate Dems from South Jersey. A real bone of contention? A provision that would expunge “third-degree distribution convictions, which covers up to 5 pounds of marijuana.”

In the case of New York, certain Latino and African American state politicians haven’t thrown their support behind recreational marijuana because they believe bills don’t go far enough to reform the criminal justice system and guarantee minorities have equal opportunity to participate in a newly legalized cannabis marketplace.

“Even if this year didn’t live up to their hopes,” Politico says, “marijuana advocates point out that they are making progress.”

So is the failure to legalize recreational marijuana in high-population, high-tax states such as Illinois, New Jersey and New York fatal for the U.S. marijuana industry?

Short answer? Not by a long shot. Now we’re even seeing marijuana-related products coming to market at the largest retailer in the world…

And by “different” Ray means other than the typical earnings report fare or — more disturbing — the comings and goings at website People of Walmart, featuring “Wally World” regulars like this supportive grandma… 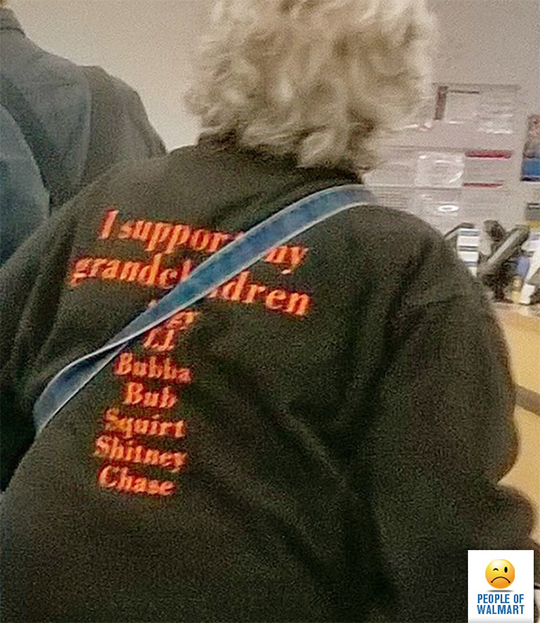 Sure hope “Shitney” is a typo…

Early last week, the rumor mill churned with news that Walmart had been in secret meetings with cannabis companies to establish a supply chain for CBD-infused products.

By Thursday? Shares of the Dow Jones retail giant were up 3%… hmm. And that’s a lot of movement for “boring, old Walmart,” says Ray. (Oh, anything but boring… see above.)

“For its part,” he continues, “Walmart is keeping mum on… plans to introduce CBD or CBD-infused products to stores.

“But folks in the industry report that major retailers are keeping CBD in mind as they allocate shelf space for new products in 2019 and 2020.”

“As cannabis continues to make the push to the mainstream,” Ray says, “it’s creating major opportunities for the small pioneering companies that are building this industry.”

That includes red-hot M&A activity: In the last five years alone, there’s been a total of $17 trillion worth of transactions in this space. (Not quite equal to the national debt — $22 trillion and counting.)

“The M&A trend is significant right now,” Ray says, “but perhaps nowhere more significant than in the cannabis industry.

“Over the past year we’ve seen a number of M&A deals in the pot space.” 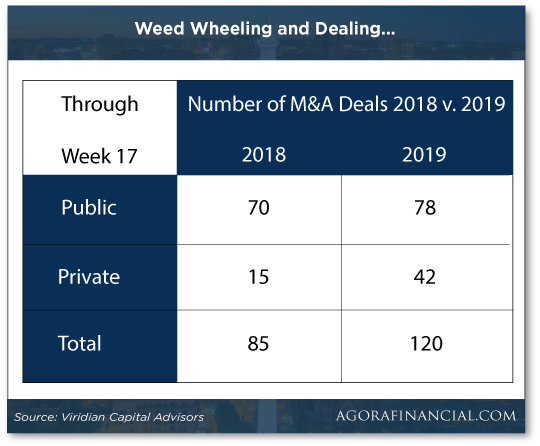 And Ray zeros in on a particular type of buyout…

“Vertical acquisitions represent smart business by pot companies,” he says. “And they’re the ones you want to target as an investor.”

Cannabis companies are seeking companies that will “facilitate their own processes more efficiently.”

For example: “A large flower (pot) producer wants to buy an edible business. A major dispensary wants to buy a distribution or flower grower, as does a CBD-maker.”

You get the idea…

One thing to note: “Traditional fundamentals matter a lot more today than five years ago in pot,” says Ray. “And in five years they will matter even more.”

That’s why Ray’s on top of the best companies in the marijuana industry that have golden, moneymaking potential.

And for the moment, he’s got his eye on a tiny startup that’s flying under the radar…

But that could change as soon as June 1.

“After a 5% fall in the S&P, losses have been nearly cut in half,” says Alan Knuckman — our eyes and ears at the CBOE.

“The broad market barometer is now just 3% from the all-time record top,” he says, “even when considering the ongoing tariff turmoil.” More on that below.

“With Amazon continuing to dominate the industry,” says Agora analyst Greg Guenthner, “the ‘retail apocalypse’ theme that dragged the sector lower for most of 2017 is once again becoming a danger to traditional brick-and-mortar chains.”

Greg notes while traditional retailers tried to get in on “Cyber Monday” action last year, Amazon was still “ground zero” for the daylong shopping bacchanal.

For Amazon, that translated into its biggest shopping day ever — even beating its own “Prime Day” record.

“On the other hand,” Greg says, “Macy’s is doing a bit better this quarter. Sales are up a breathtaking 0.7% and the chain profited a full penny per share.” Dripping with sarcasm…

“But don’t get too excited for Macy’s,” he continues. “Shares are down almost 30% year to date.” Yikes.

Many analysts touted the discount retailer as “Amazon-proof” just a couple months ago; on second thought… not so much. “Shares [tanked] 12% on Tuesday.” 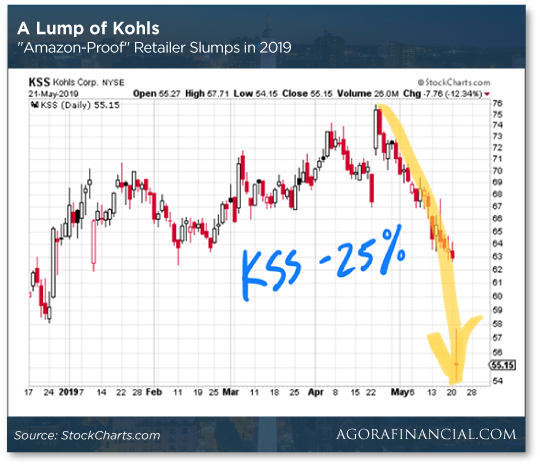 This even after Kohls cozied up to Amazon last winter, hashing out a deal to accept returns from the e-commerce juggernaut. Not to mention stocking more Nike and Under Armour merchandise in an effort to stay relevant with the athleisure crowd.

“But neither of these efforts looks to be paying off,” Greg concludes. “As a result, management slashed its full-year outlook after the slow start to the year.”

Bottom line? Greg recommends investors “lighten… exposure to the [retail] sector before it can inflict any more damage… and concentrate on other opportunities heading into the summer trading months.”

“The millennial generation, consumers in their mid-20s and 30s, is overtaking the baby boomers as the largest generation of shoppers in history,” says best-selling author Robert Kiyosaki.

“By 2020, millennial spending will account for $1.4 trillion in U.S. retail sales, according to the consulting firm Accenture. That will be a quarter of the estimated $5.7 trillion total,” Robert says.

But for millennials — as opposed to their baby boomer counterparts — the mantra isn’t “he who dies with the most toys, wins”; rather, replace the word “toys” with experiences.

Spending habits aside, Robert sees an even bigger problem 20- and 30-somethings will face down the road…

“The most significant financial challenge… is how [millennials] will be able to save and invest for retirement.”

(Well, sheesh, stop blowing all your money at gastropubs… in Denmark! *Says one testy Gen Xer.*)

“On the income front,” Robert says, “consider a Yale economist’s study of earnings from college grads, which showed ‘large, negative wage effects to graduating in a worse economy.’

“In some cases, they saw as much as $100,000 less in cumulative earnings over the next two decades versus those who graduated in more favorable times,” says Robert.

And that’s just the cash-saving piece of the retirement puzzle. Analysts “forecast 4.0–6.5% returns annually from the stock market across the coming years – down dramatically from the 7–10% annual gains common over the past 50 years or so.”

“At the end of the day,” Robert says, “as great as experiences are, they are still liabilities that take money out of your pocket.”

So far, we’ve mentioned retailers’ uphill battle this year — along with millennials shopping till they drop… out of ever retiring; now we pivot to a topic retailers and millennials know a little something about: sneakers.

“More than 170 shoe retailers, including Nike and Foot Locker, are asking President Donald Trump not to raise tariffs on footwear,” says CNBC.

In a letter to the president, the Footwear Distributors and Retailers of America says: “These tariffs would mean some working American families could pay a nearly 100% duty on their shoes.”

And in an exceptionally punny turn of phrase, the letter concludes: “Your proposal to add tariffs on all imports from China is asking the American consumer to foot the bill.” (*groan* emphasis added)

“It is time to bring this trade war to an end.” 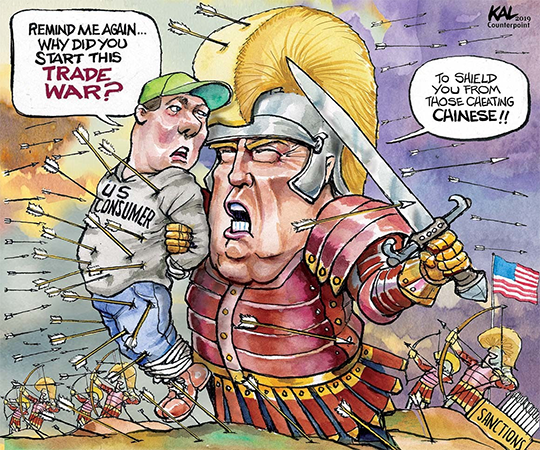 Huh… if only there were an arrow through Joe Sixpack’s shoe.

Can you say cringeworthy? The People’s Republic of China is putting the U.S. trade war on blast with a propaganda blitzkrieg.

According to Economic Policy: “An editorial in the People’s Daily warned that depriving 1.4 billion Chinese of their right to economic development and prevent China from becoming a superpower would be like ‘a mantis trying to stop a car with its arms.’”

Something’s gotta be lost in translation… 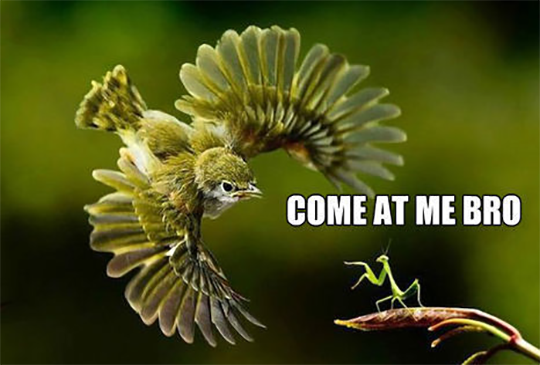 That’s not all: “A song titled ‘Trade War’… has gone viral on one [of] the largest Chinese social media platforms, WeChat, generating more than 100,000 views…”

And this: “If the perpetrator wants to fight, we will beat him out of his wits.”

Catchy. But can you dance to it?

Outside the public spotlight…

Shares of one tiny pot company could explode faster and higher than ever before.

But you must act immediately.