To hear the mainstream consensus tell it, today’s the day everyone’s decided the trade war is going to drag on indefinitely. Heck, it might even be true. 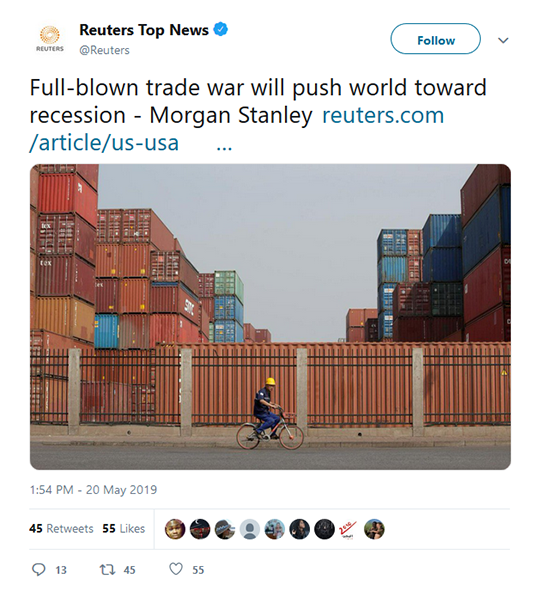 It’s not just Morgan Stanley, either.

Bloomberg tells us the “baseline” forecast from the Japanese financial giant Nomura calls for Donald Trump to impose 25% tariffs on $300 billion of Chinese goods that so far have avoided tariffs altogether. That would mean nearly all imports from China would be subject to steep tariffs.

What can we say? Welcome to the club. If you follow that link, it takes you to a back issue of The 5 anticipating a 20- or even 30-year trade war.

As irony would have it, we published those musings on Oct. 3, 2018 — the day the Dow industrials notched a record close that hasn’t been seen since.

As we write this morning, the Dow has shed more than 300 points as the new groupthink becomes a self-fulfilling prophecy.

At 25,445 the Big Board rests about 5.2% below that all-time high in October — which looks like an increasingly tough target to take out. 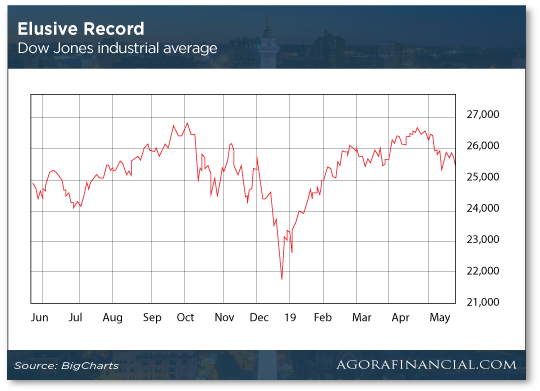 If you zoom out to a longer time horizon, the Dow sits exactly where it did during the first week of January 2018.

“We’re in a news-driven market right now,” says our chart hound Greg Guenthner. “One positive trade war headline might be all it takes to spark a quick rally. On the other hand, additional negative developments could continue to put pressure on the averages.”

We’ll have more to say about markets driven by news… and news driven by politics… in the weeks ahead. More than ever before, it’s essential to separate the noise from the real news if you want to make money. But we’ll leave it there today.

Three days ago, West Texas Intermediate was flirting with $64 a barrel. But as noted here yesterday, government inventory numbers point to a big buildup in U.S. crude stockpiles… and that knocked two bucks off the price of WTI.

Today, crude is moving in sympathy with stocks — if a trade war slows global economic activity, that means less demand for oil — and WTI has tumbled another three bucks, to $58.26.

Oil prices are volatile by nature, but the last eight months have been nuts. Trading pros with decades of experience say they’ve seen nothing like it — from a high of $76 in early October to a low of $43 on Christmas Eve to $66 in late April and now this hasty retreat… 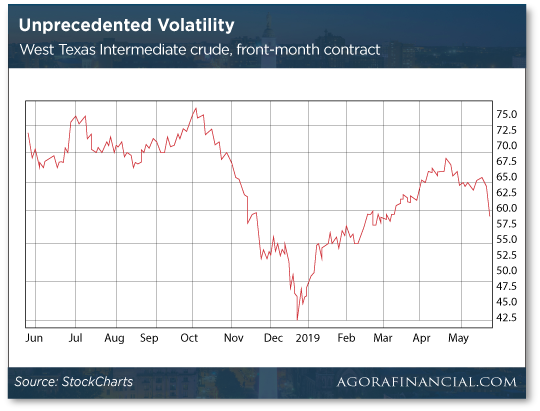 Hey, at least gasoline prices won’t be too far out of line for the holiday weekend. AAA says the national average price for a gallon of regular unleaded is $2.85 — 11 cents lower than at this time a year ago.

Of course, all bets are off if the Middle East blows up — which is still a distinct possibility.

On Tuesday, acting Defense Secretary Patrick Shanahan said those measures had “put on hold” the potential for any Iranian attack.

But no sooner did Shanahan issue the all-clear than word emerged yesterday the Pentagon is drawing up plans to deploy another 10,000 ground troops to the region for unspecified purposes. (Deployed where? Iraq? The Iraqis are *this* close to kicking out U.S. troops for good.)

“The recent weeks have thrust Iran center stage like it has not been since the Carter presidency,” reporter Curt Mills writes at The National Interest.

Mills says the White House’s model for an attack on Iran is that of Operation Desert Fox at Christmastime 1998 — when Bill Clinton launched his “Monica missiles” at Iraq’s Saddam Hussein to distract from his impeachment back home.

The aim, as Mills describes it, is “a pinprick, punitive action that presumably stops short of regime decapitation.” Mills reminds us Donald Trump himself launched similar attacks on Syria’s Bashar Assad in April 2017 and again in April 2018. (We drew parallels at the time to Bubba’s 1998 playbook here in The 5.)

Mills: “Pro-administration hawks counsel that like Assad, the Iranians would accept their demerit and essentially not respond. And if Tehran did — it would be proof positive that the Islamic Republic is unacceptably dangerous.” Guess that’s a win-win if your long-term aim is regime change.

One final thought about the 1998 model: Shortly before Operation Desert Fox, oil prices touched a low of $11 a barrel. That level has never been seen since.

As the day wears on, another sign the trade war will be a knockdown, drag-out affair…

The White House just announced a $16 billion bailout for farmers hurt by Beijing’s tariffs — not surprising given how the tariffs have worked out so far. (This is another submission from Agora Financial executive publisher and 5 founder Addison Wiggin…) 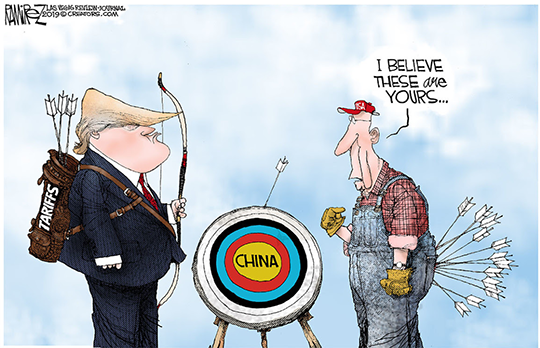 “Many farmers are still deciding what to plant this spring and could be swayed toward crops that receive higher payouts from the aid package, such as soybeans,” writes Catherine Boudreau at Politico. “That would add to already record supplies and further depress prices that have been falling for five years.”

Ain’t it great when government tries to solve a problem created by government in the first place?

Oh, and where’s that $16 billion for the bailout coming from? ’Cause we can assure you it won’t be from the Chinese.

This is actually the second round of farm bailouts: The first one overwhelmingly benefited giant corporate operations and not family farmers.

That one totaled $8.5 billion… and more than half of it went to only 10% of farm operators, according to figures the Financial Times obtained using the Freedom of Information Act.

In theory, no one operation was supposed to collect more than $125,000. But in reality, several operations used fancy corporate structuring to get around those limits.

Sign of the times: When a CEO is fired from a large company, the most likely reason is not poor performance or conflict with the board — but rather because he or she is a sleazeball.

The giant consultant/accountant PwC is out with its annual study of turnover in the big corner office. We’ll let the researchers speak for themselves…

For the first time in the study’s history, more CEOs were dismissed for ethical lapses than for financial performance or board struggles. (We define dismissals for ethical lapses as the removal of the CEO as the result of a scandal or improper conduct by the CEO or other employees; examples include fraud, bribery, insider trading, environmental disasters, inflated résumés and sexual indiscretions.)

The rise in these kinds of dismissals reflects several societal and governance trends, including more aggressive intervention by regulatory and law enforcement authorities, new pressures for accountability about sexual harassment and sexual assault brought about by the rise of the “Me Too” movement and the increasing propensity of boards of directors to adopt a zero-tolerance stance toward executive misconduct.

Yeah, maybe. We have a rather different take on what’s behind all these “ethical lapses”…

In the present era, the instances are legion: Theranos CEO Elizabeth Holmes snookered some of Silicon Valley’s best and brightest. Tesla’s Elon Musk still commands a cult of personality with his carnival-barker act, but for how much longer? (TSLA is now barely higher than it was five years ago.) And there’s the shameless corner-cutting at Boeing that contributed to the deaths of 346 people.

India’s Prime Minister Narendra Modi got away with his big cash grab.

The results are in from parliamentary elections: Modi’s Hindu nationalist party, known as BJP, won in a landslide — no doubt to the delight of his many supporters. 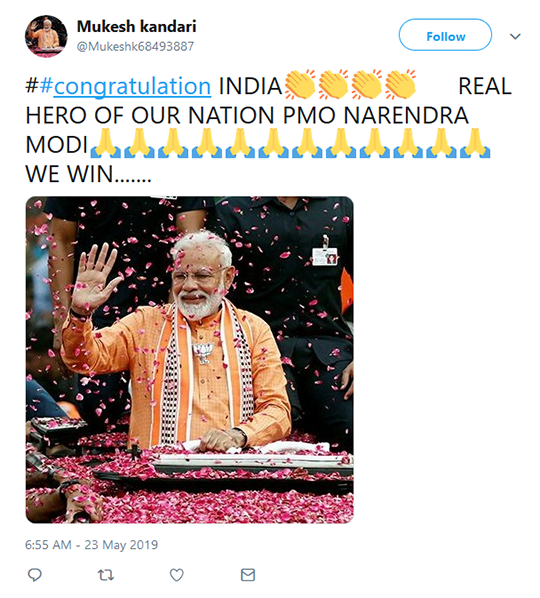 No guarantee of that outcome: It was on U.S. Election Day 2016 that Modi declared a ban on India’s most commonly used banknotes — about 85% of the cash in circulation. As we noted at the time, Indians were required to bring their cash to a bank, where it could be deposited in a digital account or converted to other denominations.

Hundreds of millions of people accustomed to dealing only in cash were dragged kicking and screaming into the electronic age — where transactions are more easily tracked and taxed. Chaos ensued for weeks; in some places money riots broke out.

In 2017 the German journalist Norbert Häring uncovered documents that indicated the scheme was hatched in part at USAID — the U.S. Agency for International Development — as well as the Gates Foundation. In other words, it’s a made-in-America plot using a nation of 1.3 billion people as guinea pigs.

But the experiment “worked” for its architects. Modi, the face of the cash grab, will be large and in charge for five more years.

On the possibility China might clamp down on exports of rare earth elements (REEs) to the United States, a reader writes…

“I think in general your reaction to China being able to halt the sale of REEs is accurate, but we’ve seen this before and the destruction of the U.S. economy would eventually destroy the Chinese economy.

“The Chinese, who are already suffering from the narrowest of profit margins, would be hard-pressed to find alternative buyers of Chinese-produced goods globally to replace the rather significant losses they would occur from busting the American buying power. Just an observation.”

The 5: True enough. Then again, if Washington pushes Beijing into too tight a corner, it might happen anyway.

After all, the idea that Japan could defeat the United States in WWII was far-fetched at best. But the U.S. embargo on oil sales to Japan, among other measures, led Tojo and crew to conclude they had nothing to lose by striking Pearl Harbor…

P.S. Even rare earths are getting caught up in the stock market sell-off today. The VanEck fund family has a REE/strategic metals ETF that trades under the ticker REMX.

On Monday and Tuesday as the talk of an export ban heated up, REMX sailed up 14%. But it’s been slowly downhill since and REMX is down more than 2% today alone. Hmmm…