A Peek Into a Hush-Hush Meeting

If you’re trying to book a suite at the Fairmont Le Montreux Palace in Switzerland this weekend, fugetaboutit…

That’s because the almost five-star hotel — we checked Yelp reviews — is hosting the annual Bilderberg Meetings and packed to the swank rafters with about 130 global movers-and-shakers. 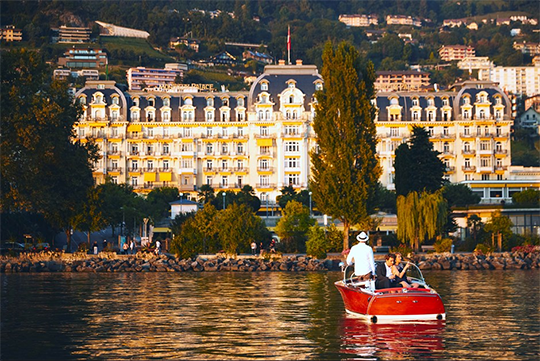 “So why 4 stars?” says a peeved Yelper, “Time to upgrade, Palace! Get some routers.”
Photo courtesy of fairmontmoments.com

(Umm… here’s hoping wireless connectivity isn’t an issue for the aforementioned global elites… Concierges, have plenty of aspirin on hand!)

No doubt, you’re curious to know the guest list — and you can find it at bilderbergmeetings.org so it’s not that secretive.

A sampling of U.S. participants…

Not on the official list but still reportedly attending? Secretary of State Mike Pompeo.

As for the purpose of the get-together: “The annual Bilderberg Meeting is a three-day forum for informal discussions,” the website says, “designed to foster dialogue between Europe and North America.”

While there are a couple representatives from Canada on the guest list this year, there’s not one from Mexico — population 129.2 million. The largest country in the EU — Germany — has a population of 82.8 million….

Make of that what you will.]

“The meetings are held under the Chatham House Rule,” the website continues, “which states that participants are free to use the information received, but neither the identity nor the affiliation of the speaker(s) nor any other participant may be revealed.”

By way of background, the first meeting of its kind was held at the Hotel De Bilderberg in The Netherlands, 1954.

“Representatives from economic, social, political and cultural fields were invited to informal discussions to help create a better understanding of the complex forces and major trends affecting Western nations in the difficult post-war period,” the website says.

So what’s up for discussion this go-round? 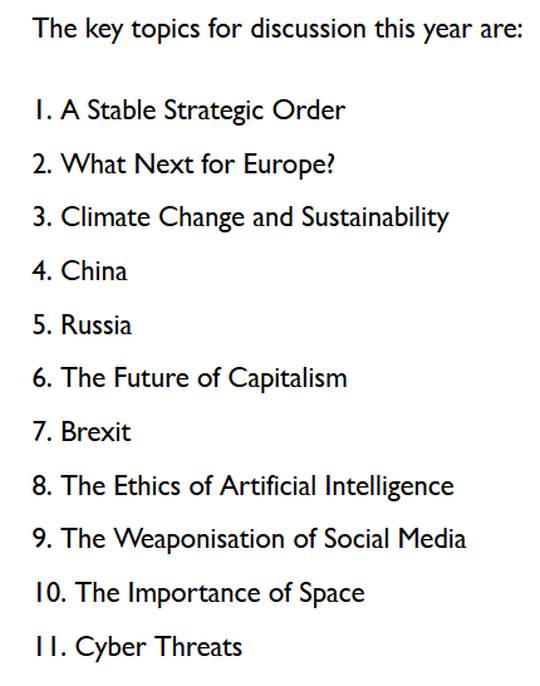 Yeah, that first item on the agenda’s a real doozy — A Stable Strategic Order — sure to set conspiracy theorists’ tongues wagging.

Third from the top we find a discussion on climate change, something that’s gotten a lot of press in recent days…

Yesterday, a rep for the Church of England’s endowment, Edward Mason, “told shareholders that Exxon and investors ‘have been in open conflict about climate strategy and disclosure,’” the AP reports.

“The Church of England and the New York state comptroller were lead sponsors of a resolution that would have asked Exxon to set targets on emissions from burning oil and gas.”

Exxon Mobil CEO Darren Woods begged to differ, telling investors, hey, we’re meeting the demand for fuel and we expect demand to increase 1% per year… for the foreseeable future. So what’s the problem?

Then Woods went on to suggest, relax, we’ve cut emissions — even if we won’t/can’t share the data to prove it. (We’re paraphrasing — but you get the idea.)

For the time being, the dust-up’s a nonissue. “Exxon successfully petitioned the Securities and Exchange Commission to block a shareholder vote on setting targets for reducing carbon emissions from burning oil and gas.”

Energy companies — including Exxon — are also taking a different tack…

“There's a reason more big businesses are pushing for a carbon tax,” says an article at The New Republic, “and it's not because they want to fight climate change.

“For several years now, the heads of oil companies like Suncor and Exxon Mobil and BP have been publicly calling for a carbon tax, in which the government would charge polluters for every ton of climate-warming gases they emit.

“They’re doing this because a carbon tax, as a market-based policy rather than a mandated regulation, is the most business-friendly solution being floated in Washington.”

To Jim Rickards’ way of thinking: “The reason is [energy companies] fear something much worse (such as the Green New Deal) and want to get out ahead of the problem by paying a carbon tax and otherwise laying the issue to rest.”

In other words, energy companies that rely on fossil fuels for their existence would rather pay a tax… and carry on with business as usual. But exactly who will be footing the bill?

Jim points out: “A carbon tax can be passed on to consumers (just like beer and cigarette taxes) without shutting down the energy industry.”

“The carbon tax is a small price to pay to avoid the wrath of the radicals and ideologues,” says Jim. “The only problem is that you and I will be the ones paying it.”

[Ed. note: Jim Rickards is days away from unveiling an entirely new trading strategy, one that will have you living large when the market hiccups now and then. We’ll keep you posted.]

The markets are reacting as Trump calls out Mexico — threatening ramped-up tariffs if illegal immigration doesn’t stop. So far, the Dow’s shed about 240 points, to just under 25,000…

Greg says: “Despite the downright difficult trading environment we’ve put up with this month, [Beyond Meat] continues to power to new highs.” 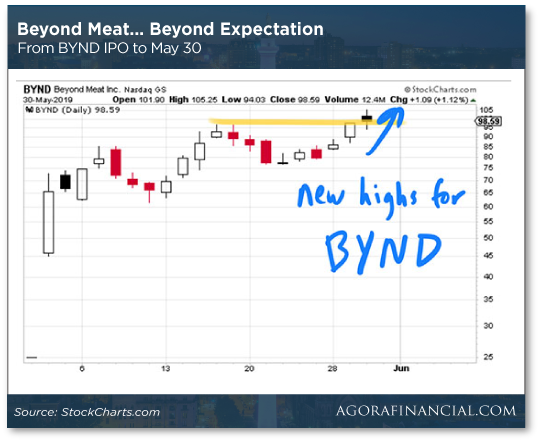 Greg’s got a hunch that Beyond Meat’s success in the plant-based meat-substitute space has gotten a boost from a similar company, Impossible Foods, that’s getting a lot of buzz as it prepares for its own IPO.

And the latest to join the vegan craze? Chick-fil-A and KFC, making Greg wonder what the Colonel would say…

We believe: “Original? Or Extra Crispy?”

The Commerce Department is out with the “core PCE” number for April. This is the Fed’s preferred measure of inflation… and it increased 1.6% in April after rising 1.5% in March.

While the Fed’s inflation target is 2% — and the core PCE is creeping up — it’s unlikely Jerome Powell and company will be raising rates anytime soon.

“The government also reported on Friday that consumer spending, which accounts for more than two-thirds of U.S. economic activity, rose 0.3% as consumers spent less on services, including household electricity and gas,” CNBC says.

“Data for March was revised up to show consumer spending jumping 1.1%, the biggest increase since August 2009, instead of the previously reported 0.9% rise.”

“Illinois Senate passes bill legalizing recreational marijuana use,” says an article at The Hill. “The bill now heads to the state House for consideration.”

And this one’s a nail-biter, folks, because legislators are attempting to get the bill passed before the session breaks for the summer… today.

The bill would allow adults age 21 and over to possess a little over an ounce of marijuana for recreational use. On the issue of growing cannabis plants for personal use, a provision would limit growing to medical-marijuana users only.

In addition: “Gov. J.B. Pritzker indicated interest in pardoning what could be hundreds of inmates who were placed behind bars over marijuana offenses,” The Hill says.

Sen. Toi Hutchinson, who co-sponsored the measure, says: “I would say that this is the largest piece of expungement in a criminal-justice reform aspect in the country — I would probably say in the world.

“There’s been nothing that’s been attempted to be this big in one piece of legislation, ever,” she continues. “We are standing on the step of history.”

[Ed. note: Indeed, this is a history-making moment for marijuana legalization…

And shares of one tiny company could explode faster and higher than ever before because of it.

“What I’ve found will be one of the best pot investments you could ever make,” says our pot stock authority Ray Blanco.

“And I want to show you the one move that could offer you a life-changing marijuana payday.”

This may be your only chance to turn pocket change into a retirement windfall.

But you must act by TOMORROW, June 1.

Last time we checked in on Buc-ee’s convenience stores, the Texas-based chain was in litigation with a BBQ joint over trademark infringement…

Spoiler: Buc-ee’s won. Its cap-wearing beaver put the smackdown on a cowboy-hat sporting alligator. We noted last year: “If it were a [real] death match between the mammal and the reptile, the outcome’s a lock.” 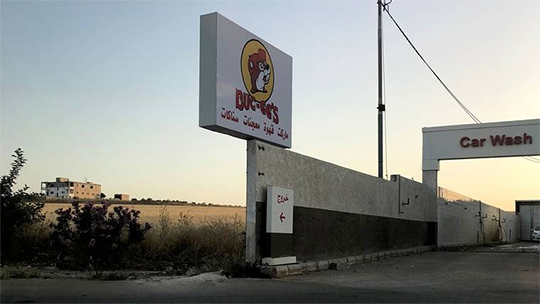 The Houston Chronicle reports: “Earlier this year Buc-ee's debuted its first location outside of Texas, in Robertsdale, Alabama, to much fanfare.

“Little did we know the next place the famous beaver would be spotted: Amman, Jordan.”

Writer Maurice Chammah said on Twitter: "I was driving on a highway north of Amman… and found a… Buc-ee's. Or at least a place claiming to be Buc-ee's.

"I have so many questions."

We bet Buc-ee’s lawyers do, too…

A reader says: “Why on Earth…

“… given the constant stupidity, mendacity, buffoonery and savage criminality displayed daily in Baltimore… would Agora choose to headquarter there?

“Cheap rent, but quality of life, including not being murdered, must outweigh?”

The 5: Cheap rent? Not if you want to live anywhere with any semblance of quality of life. And that whole murder thing? We feel you.

That being said, Agora’s a homegrown business… and at the end of the day, there’s no place like home.

And YOU could be one of them — but you only have through TOMORROW to move on this.