“My conversation with Dave Gonigam caught me a bit off guard,” said our income expert Zach Scheidt at sister publication The Daily Edge in November 2018.

This after a chat with The 5’s managing editor at a company happy hour in Charm City, complete with food truck (Greek) and choice of wine or beer (icy cold).

Consider it one of the perks of working for Agora… and we’re not just talking good food and libations; rather, the opportunity to rub elbows with some really bright people who just might disagree with you.

“Zach, I like reading your work,” Dave said then. “But I wish you weren’t so darn bullish all the time!” (Perhaps Dave used a different word? But I embellish…)

If you’ve read The 5 for any length of time, you know where Dave stands — he believes we’re in the late boom phase of the boom-bust cycle.

The upshot of this exchange? Zach said: “My conversation with Dave helped me see that I need to change my tone when it comes to the market’s direction and the volatility we’re currently experiencing.”

So this anecdote immediately sprang to mind when we read Zach’s headline for The Daily Edge Monday morning: “4 Doomsday Tips (Just in Case).”

Hmm… Has Zach changed his bullish tune for good? And with good reason, if yesterday’s any indication…

The FAANG stocks were almost universally in the dumps — something we mentioned in passing yesterday — sending the Nasdaq into the correction zone.

Are you humming Kenny Loggins’ song “Danger Zone” yet? You will be… 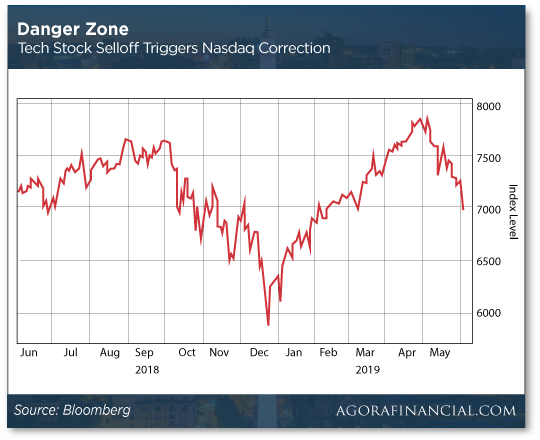 By the closing bell yesterday, Alphabet (Google) was down 7.4%. And Google wasn’t alone. Facebook and Amazon took a bath too. Facebook’s losses were in the double digits — a little over 10%. Amazon? Down almost 7%. Apple was less affected but still sloughed off about 1%.

The reason for the frenetic tech sell-off? Reports that the DOJ’s building an antitrust case against the tech juggernaut Google. And — this just in — against Apple, too.

As for Google, the Feds are zeroing in on the company’s broad-based control over its internet search engine. (Gee, when you’re already included in the Merriam-Webster dictionary as a verb meaning to search the internet… seems that particular ship has sailed.) 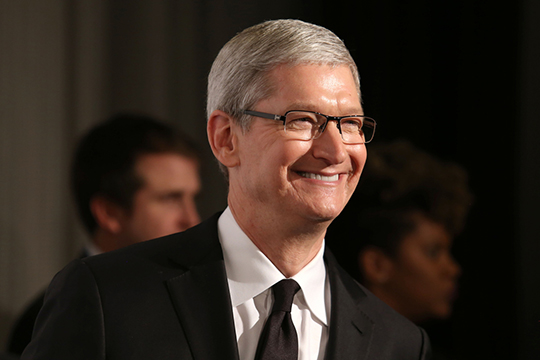 To top things off, the DOJ “has been given jurisdiction to probe [Apple’s] practices as part of a broad review into potential anti-competitive behavior among big tech companies,” according to CNBC.

Then there’s Facebook — catching the attention of a different fed tentacle, the FTC. Their investigation centers on how Facebook handles user data and — once again — shuts down competition.

“The regulatory situation is an overhang and it has long-term negative implications,” says Matt Maley of Miller Tabak & Co. “It creates another head wind in a situation where we have a long list of head winds.”

“Over the weekend, both China and Mexico signaled willingness to negotiate with the White House over escalating trade issues,” says Zach.

“We’re willing to adopt a cooperative approach to find a solution,” said Chinese Vice Commerce Secretary Wang Shouwen on Sunday. By Monday? China was back to playing the blame game, accusing the U.S. of “resorting to intimidation and coercion.” (Not that the U.S. isn’t playing the same game.)

“While Mexico,” says Zach, “rushed a delegation to the U.S. to begin immigration talks.”

Aaand… Mexico lobbed its own grenade at the U.S., “warning not only that [tariffs] would hurt the economies of both countries but also could cause a quarter-million more Central Americans to migrate north,” according to CNBC.

So, yeah, head winds… or headaches?

“I’m changing my opinion on the future of this bull market,” Zach continues. “There are just too many risks in the stock market right now.”

Zach makes clear, however, he won’t be mashing any panic buttons… and he doesn’t want Main Street investors to either.

“In fact,” he says, “now is the time to get your ‘game plan’ in place in case the market does sell off.”

Own Companies That Make Money in All Environments

“During uncertain times like this,” he says, “it’s important to own stock in businesses that won’t slow down during a pullback. These are called noncyclical companies, and they include sectors like health care, consumer staples and utilities.”

Zach makes a good point: WTSHTF you’re still going to need that blood pressure medication (arguably, more than ever). Not to mention the paper towels and TP to clean up with… heh.

“And [you] won’t be forgoing AC this summer or consumer staples like food, soap and toothpaste either.” We sincerely hope not.

To determine if a company’s expensive — or not — look at its price-earnings ratio (P/E).

Zach says: “P/E ratios are a lot like the “price per pound” labels you see at grocery stores. The lower the P/E ratio, the cheaper the stock.”

“With the majority of today’s uncertainty surrounding trade tensions,” Zach says, “it’s important to allocate your hard-earned money away from companies that do business with China or Mexico.

“This means looking more toward steady stocks that operate domestically,” he says. Utilities fit the bill.

“If the market does pull back,” Zach says, “you’ll have the opportunity to buy quality stocks at cheap prices.

“That’s why it’s important to plan ahead now, so that if the time does come, you’ll have cash ready to deploy.

“Bottom line,” says Zach, “although the U.S. economy is still strong, the mounting uncertainties surrounding trade pose too high of a risk in the short term.”

In other words, Zach’s outlook is not “so darn bullish” as it used to be…

“That’s why I’m recommending all readers protect their hard-earned money with these four tips,” he concludes.

And doing it without vesting, enrolling or tapping into any kind of pension/employment benefits.

“Such is the genius of an investment strategy that allows you to collect cash,” says Zach…

Are you ready for this? The Dow’s surging 450 points today after “Federal Reserve Chairman Jerome Powell signaled the central bank was open to easing monetary policy to save the economy,” CNBC says.

So… the Fed’s going to save the economy now? Interesting word choice. And suddenly Powell’s a superhero…

[Side note: We have to make mention of the images financial sites use to announce the ups and downs of the Dow in particular. You have two choices: worried broker or optimistic broker. Have you noticed that? Heh.]

“There is growing consensus that the makings of a financial crisis are building — and could drop sooner rather than later,” says former Wall Street banker Nomi Prins.

The culprit? To Nomi’s way of thinking: corporate debt. And, of course, a crisis in the making we’ve been following at The 5…

“Companies are holding over twice as much debt now as they did before the last financial crisis,” Nomi reports. “Corporate debt relative to GDP is at record highs, and credit standards have deteriorated.

“The amount of junk bonds and leveraged loans, or ‘risky debt,’ has risen to worrying levels.”

“The Financial Stability Oversight Council, a panel of top U.S. regulators charged with preventing future financial crises, met Thursday to discuss the past decade’s surge in corporate borrowing, much of it by companies with junk-grade credit rating,” says an article at TheStreet.

Mind you, the meeting was sorta secret… so shhh!

Treasury Secretary Steve Mnuchin was in attendance — as was Fed Chairman Jerome Powell — along with other honchos from the FDIC, SEC and the Consumer Financial Protection Bureau.

“No details were provided on the gist of the discussion,” The Street says, “though according to the statement the panel heard an ‘update’ from Craig Phillips, a counselor to Mnuchin, on recent market developments involving ‘corporate credit and leveraged lending.’”

Just as Nomi suspected… and confirming corporate debt’s the mystery “bubble” we talked about last week?

As Mike sees it: “The main reason why you should expect higher gold prices is the fact that the metal has already pulled back significantly from its 2011 high.

“As a result, this has triggered widespread cutbacks in exploration budgets in the gold mining sector,” he says. Just take a look at the chart below… 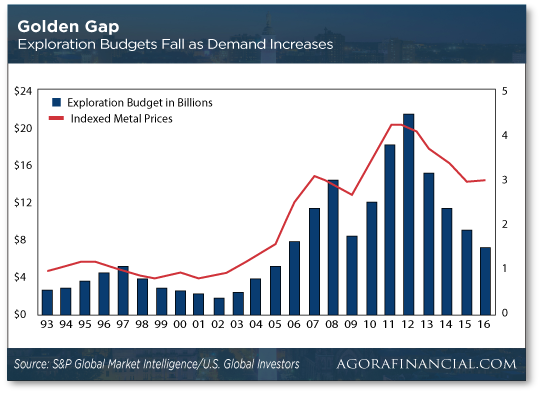 “This means global gold supply is shrinking even as demand remains steady now and is poised to surge much higher,” Mike says.

“With gold hitting a two-month high Monday, the rally could very well be starting as we speak,” he continues. “And this week, patient gold speculators may finally be getting rewarded.”

Mike’s takeaway? “Consider adding [gold] to your holdings if you haven’t already, before the rally really blasts off.”

The TSA is getting “handsy” — mind out of the gutter, please — to close budget shortfalls.

From the humorous legal website loweringthebar.net we learn the agency collects the pocket change airline passengers leave behind in bins… 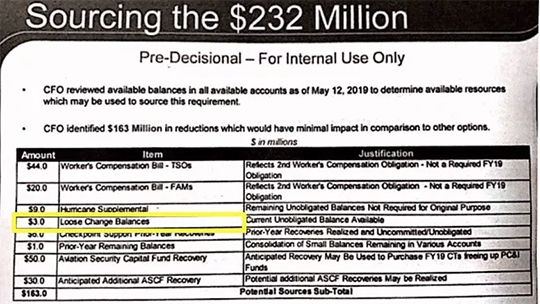 “Though… most people do a pretty good job of cleaning out their bins,” the website says, “enough people apparently do not that TSA currently has $3 million in loose change sitting in its piggy bank(s)” (emphasis added).

Once upon a time — back in 2013 — U.S. Rep. Jeff Miller (R-FL) introduced a bill called the “TSA Loose Change Act,” which would have required the agency to turn over lost-and-found change to “nonprofits that provide benefits for members of the armed forces and their families.”

And the bill was handily passed through the House, too… but then died a quiet death in the Senate Commerce Committee.

Now the TSA is applying “loose change balances” to a $232 million budget deficit.

“This is not a huge amount in the context of the national-security-boondoggle budget, of course, but still we’re talking about millions of dollars that travelers have been unknowingly providing to the TSA,” says Lowering the Bar.

Final word: Make sure you scrounge up all loose change from bins after going through airline security… but you might want to snap on some latex gloves first.

P.S. We know pensions are all but dead.

“Pensions are part of our mythical past,” says MarketWatch.

But rather than worry about it…

He got paid — in cash — thanks to three great companies.