Hall of Mirrors (The Media and Iran)

This morning it’s already given up more than a third of that gain, trading at [checking our screens] $52.37.

More about the oil price anon. Of more interest here this morning is the media’s treatment of the “incident” in the Gulf of Oman.

It was refreshingly skeptical. The Drudge Report had a link early on to a Bloomberg analysis headlined, “Iran Has Little to Gain From Oman Tanker Attacks.” CNN followed with “Iran Will Get the Blame, but the Gulf of Oman Truth Is Likely a Lot Murkier.”

Too bad the media didn’t exercise the same level of skepticism in the run-up to the Iraq war and during the Russian “collusion” hysteria before the release of the Mueller report. Who knows how much better this 21st century might have turned out? (Your editor was still in the TV news racket during the earlier of those two incidents and witnessed the distortions up close and personal.)

In the afternoon, Secretary of State Mike Pompeo strode before the cameras and, to no one’s surprise, formally laid blame on Tehran.

Again, the coverage was what real journalism is supposed to be — especially in the crucial hours after a big story breaks and facts are hard to come by. 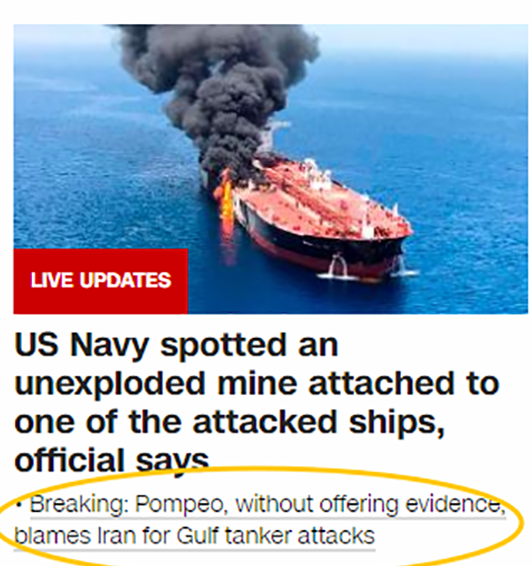 NPR struck the same note: “Without providing evidence, Secretary of State Mike Pompeo said Iran was responsible for explosions on two tankers in the Gulf of Oman.”

We can only imagine the panicked phone calls between State, the Pentagon and the National Security Council by late afternoon: “It isn’t working. We need more.” 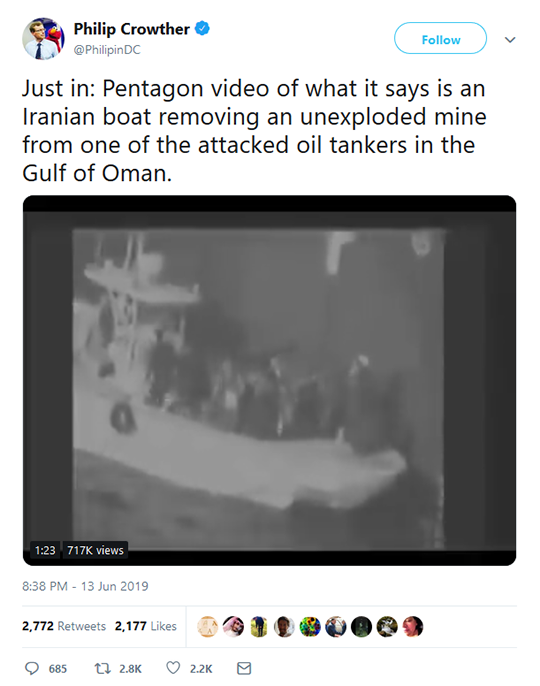 The words “what it says” are doing a lot of heavy lifting there… but that too is good journalistic practice, emphasizing a claim versus an independently verified fact.

The video is anything but conclusive. Already the ship’s owner and operator is throwing cold water on the mine story. “A mine doesn’t damage a ship above sea level,” says Yutaka Katada, president of the Japanese firm Kokuka Sangyo. “We aren’t sure exactly what hit, but it was something flying toward the ship,” he said.

It might just be dumb luck that the media’s skeptical antennae are raised this week. The “tanker incident” happened days after several media outlets learned they’d been had by Iran hawks.

Since 2014, a writer going by the name “Heshmat Alavi” built a large following on Twitter with criticism of the Iranian regime, complete with original reporting based on sources within Iran. Alavi built enough credibility to get published at Forbes, The Hill, the Daily Caller and even the Voice of America — Washington’s official mouthpiece to foreign audiences.

In addition, Alavi launched Twitter broadsides against journalists he deemed insufficiently tough on Tehran — labeling them as “agents” and “collaborators” of the mullahs.

Turns out there’s probably no such person as “Heshmat Alavi.”

On Sunday, The Intercept published an exhaustive investigation concluding Alavi is a persona invented by an Iranian exile group called the Mujahedeen-e-Khalq, or MEK. The Twitter account is run from Albania. “This is not and has never been a real person,” says Hassan Heyrani, a high-ranking MEK defector.

The MEK is a weird Islamo-Marxist cult that’s never had much of a following within Iran. During the days of the Iranian revolution 40 years ago, the MEK killed several Americans. For decades it was on the State Department’s list of terrorism sponsors — until Secretary of State Hillary Clinton took it off in 2012.

Long before that, however, the MEK managed to enlist American politicians from both major parties to give paid speeches on behalf of its political wing known as the National Council of Resistance of Iran. We’re talking Democrats like Howard Dean and Wesley Clark, as well as Republicans like Rudy Giuliani and Newt Gingrich.

The MEK’s bizarro backstory — for instance, its members cannot marry — could fill an entire episode of The 5. Our point today is that “Alavi” has left egg on the media’s collective face.

Forbes and the Voice of America have pulled the posts under his byline from their websites. The Twitter profile appears to be suspended.

Had the Alavi revelation not occurred only days ago, we can’t help wondering whether the media would have greeted Pompeo’s claims with the usual credulity given most claims that come from inside Washington’s massive national security apparatus.

And we can’t help wondering whether the next provocation blamed on Iran will get the same skeptical treatment as this one.

Anymore, the news has become a hall of mirrors replete with rumor, spin and painfully thin sourcing. I’ve never seen anything like it in a career that spans 20 years as a TV news “gatekeeper” and 12 years in financial publishing — the original “alternative media.”

And yet, as I said on Monday, the markets are driven by the news cycle now more than ever… and the news is driven by agendas now more than ever. An investing strategy that can separate the noise from the real news is essential if you’re to survive and thrive… and it’s part of a project that’s been on my radar all this year. Details to come…

As for the oil price, “I’m not sure anything can snap crude out of its funk,” says our chart hound Greg Guenthner.

In his assessment, the rebound yesterday didn’t undo the damage from a sharp drop the day before — to five-month lows… 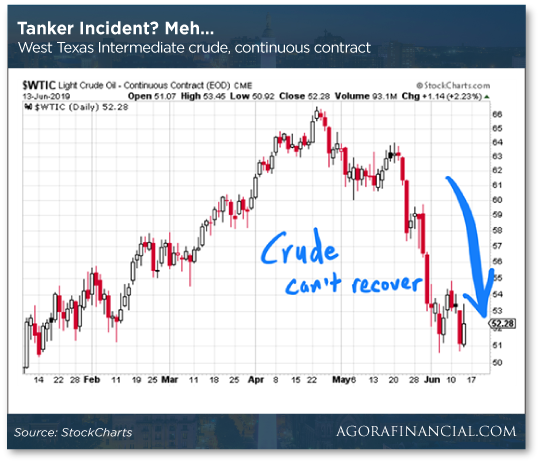 “While this probably isn’t the last we’ll hear about the attack,” says Greg, “it certainly doesn’t feel bullish for free-falling crude right now.”

Elsewhere in the markets, gold is pushing toward highs last seen more than a year ago.

At last check, the bid was just a buck away from $1,350. If it can close above that level for the week, that’s a good sign indeed for a push to the $1,375 area last seen three years ago.

If the broad stock market is spinning its wheels, the day nonetheless brings another crazy-successful IPO — Chewy, the online unit of PetSmart. The IPO price was set yesterday at $22; trading in CHWY debuted moments ago at $39.

Chewy comes on the heels of the cybersecurity firm CrowdStrike’s IPO. The price was set Tuesday afternoon at $34; trading in CRWD commenced Wednesday north of $63, which is more or less where it sits this morning. (CrowdStrike is the outfit that reviewed the Democratic National Committee’s servers in 2016 and concluded “the Russians” hacked the DNC’s emails. The FBI never bothered to independently confirm that claim. Yeah, don’t get us started…)

The economic data gods delivered a handful of important numbers today and the overall takeaway is… “doesn’t suck.”

Retail sales registered a 0.5% jump during May. That was less than expected, but if you throw out auto and gasoline sales the picture is all right — also a 0.5% jump, which was more than expected. And April’s numbers were revised up.

Meanwhile industrial production jumped 0.4% during May, better than expected. And the “capacity utilization” figure ticked up for the first time since last fall; 78.1% of the nation’s industrial capacity was in use during May.

From Hong Kong comes a reminder of why the power elite would love nothing more than to achieve a cashless society.

As you might be aware, there were huge protests there this week opposing legislation that would allow people to be extradited to mainland China for trial. More protests are set for the weekend. 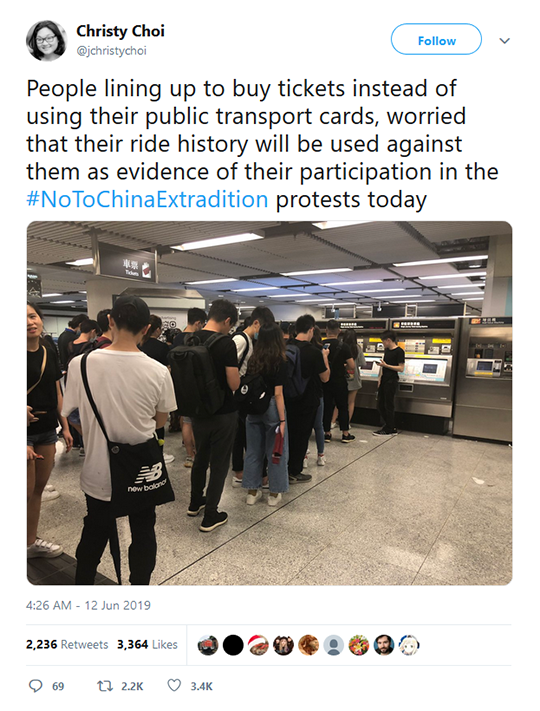 “There were unusually long lines at ticket machines in the city underground metro stations,” the AFP newswire affirms, “as protesters used cash to buy tickets rather than tap in with the city’s ubiquitous Octopus cards — whose movements can be more easily tracked.”

Many also disabled location tracking on their phones and purged their social media history.

In response to that tweet from a Reuters reporter, someone responded, “This is why cash is so important! Economists singing the praises of a cashless society are actually arguing for authoritarianism!”

Closer to home, we have a story of toy money that got a 10-year-old in trouble with the law.

“Someone please help me understand why my child with disabilities is being questioned without me knowing or present?” a mom named Tiffany Kelly writes on Change.org.

Ms. Kelly lives in Chevy Chase, Maryland. In an effort to boost his socializing skills, the fourth grader handed out toy money to other kids on the bus one day last month. It’s stuff that bears a passing resemblance to Federal Reserve notes, but it doesn’t take long to notice they’re not the real thing… 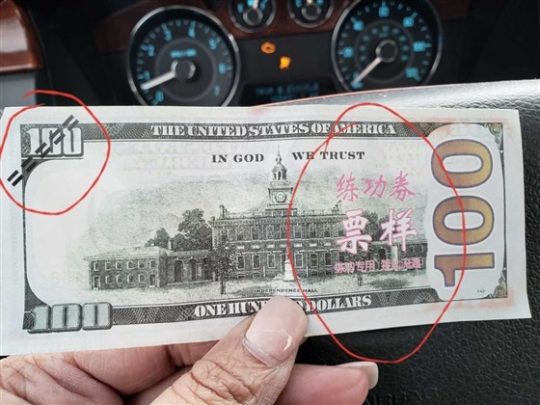 You can buy ‘em on Amazon… [Photo by Tiffany Kelly, via NBC News]

One of the bills was left behind on the bus. Someone — we don’t know who, but clearly someone who’s absorbed the toxic “see something, say something” culture of metro D.C. — called the cops.

An officer showed up at the school to question the boy. Mom doesn’t know for how long. “By her own admission, no crime had been committed,” Kelly says. “At what point do officers determine that a law has not been broken and they move on?” Kelly says only at the end of the school day did the officer call her.

The school district is fessing up to “clear missteps on our part.” Gee, ya think?

Ms. Kelly’s petition complains of “overpolicing of minority children.” She and the child are black. The family has lived in Chevy Chase only six months. The town is 5% black and 85% white. And if it’s like the rest of Montgomery County, the workforce is made up almost entirely of federal employees and contractors.

You’d think of all places they’d be a little more “woke” there, no?

To the mailbag: “I was evaluating purchasing unsubsidized photovoltaic panels for powering my home from solar energy and found out that the amount of energy required to produce any photocell exceeds the amount of energy that it will ever produce during its entire lifetime.

“At least they are made mostly of cheap silicon. From your info about electric vehicles, it appears that now is the time to go long on copper stocks instead of photocells.”

The 5: According to a report from BMO Capital Markets, battery electric vehicles and plug-in hybrids require 3.6 times as much copper as the typical internal combustion engine.

Great news for copper producers. Well, assuming the global auto market hasn’t stalled out for the current phase of the boom-bust cycle. Which looks increasingly likely…

“All I can think of when I look at that giant roll of TP,” a reader writes after yesterday’s episode, “is how much fun my cat is going to have!!”

The 5: And it’s even easier to reach from the floor…

P.S. Here at The 5, we sift through the work of all our editors at Agora Financial. There’s one who claims his track record could be better than all the rest of his colleagues’.

In fact, he thinks he’s turned more of his readers into millionaires than anyone else at our firm.

If you check out this video clip — where he reveals his personal trading record — you’ll see why he thinks that.

We’re reopening this editor’s most popular publication this weekend to allow more readers the chance to become his next millionaire success story. Access here.