It’s days like today that are made for Knuckman’s law.

Coined by Alan Knuckman, our 28-year veteran of the Chicago options trading pits, the law states it’s wise to wait 48 hours before reacting to anything Donald Trump says.

In their heart of hearts, most traders know that’s wise. Knee-jerk reactions are how fortunes can be lost — quickly, too. The neocortex that controls our higher functions knows all that.

But along comes a tweet like this — 10 minutes after the market open — and the ol’ impulsive lizard brain takes over. 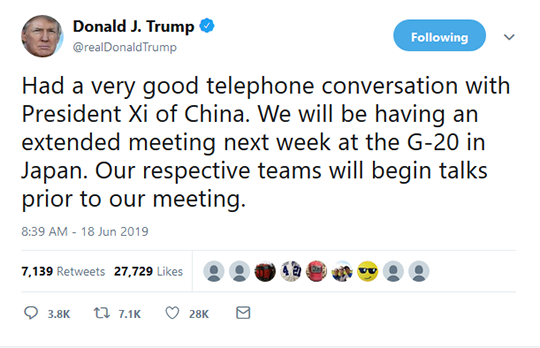 The “thought process,” if that’s what you want to call it, goes like this: YES! An “extended meeting.” That means they’re close to a deal! Next week there will be signatures and handshakes and high fives and then all this trade war uncertainty of the last 18 months will be history! Just like old times again! Up, up and away! Dow 30k here we come!

We interrupt this lizard-brain binge for a mammalian reality check — because around here we don’t buy into every “trade war optimism” headline.

For one thing, the trade war has dragged on these last 18 months and stocks have proven remarkably resilient. Again, the S&P is only a skosh below a record that was set barely six weeks ago.

Yes, there was a nasty market swoon late last year, but that wasn’t a trade war thing — it was a Federal Reserve thing. Throughout the fall, there was “hawkish” screeching from the Fed — which turned to “dovish” cooing the moment the stock market threatened to fall 20% from its peak into bear-market territory.

More to the point, we’re just not sure either side has an incentive to reach agreement.

On the U.S. side, conventional wisdom says the president needs a “win” in the form of a done deal. He can brag about it on the campaign trail, and a deal would help ensure the economy stays on an even keel going into 2020.

The pollster Scott Rasmussen begs to differ. “For more than a generation,” he writes in his syndicated column, “James Carville’s campaign maxim ‘It’s the economy, stupid’ has been held up as an essential truth of American politics.”

Rasmussen says the truth is now more complex, based on his firm’s surveys. “For example, just 31% believe higher tariffs on goods imported from China will be good for the United States. However, a much larger number — 58% — support such tariffs.

“In other words, more than a quarter of all voters think the tariffs will be harmful to our economy but still support them,” Rasmussen sums up.

What gives? Elsewhere in Rasmussen’s surveys, “63% believe China has used trade to take advantage of the United States. Only 13% disagree.

“This suggests that many voters see these trade negotiations as a matter of fairness rather than transactional economics.”

We’re not surprised. (Dismayed, to be sure, but not surprised.) Last year we told you about Poplar Bluff, Missouri — where a nail factory was slashing jobs because, thanks to tariffs, it no longer had access to cheap imported steel.

And yet the townspeople were in solidarity with the president. As a restaurant worker told The Kansas City Star, even though the tariffs mean “he’s going to drive up the cost of everything, people are still going to stand behind him.”

As for the Chinese side, the Communist Party mouthpiece People’s Daily made it plain as day recently: “Don’t say we didn’t warn you!”

Those were the exact words it used amid rumors Beijing might cut off China’s exports of crucial “rare earth” metals to the United States. The full quotation for context: “We advise the U.S. side not to underestimate the Chinese side’s ability to safeguard its development rights and interests. Don’t say we didn’t warn you!”

CNBC writer Yun Li points out the People’s Daily has used that sentence on two major occasions in the past — before a border war with India in 1962 and before a brief war China fought with Vietnam in 1979. She calls it “a history-laden expression the publication has used ahead of full-on wars.”

Our Jim Rickards points out China has more or less run out of imports from the United States that it can lay tariffs on… but rare earths are one of many other options Beijing has to wage a trade war.

“The real meaning of the threat,” he says, “is that the trade war has far to run and will end up affecting more than just trade. Let’s hope the threat doesn’t extend all the way to a shooting war as it did in the cases of Vietnam and India.”

[Ed. note: Jim’s managing editor, who’s old enough to be thinking about retirement, just tore up a check for $107,000 — because he knows something others don’t.

He’s also recorded a video clip you owe it to yourself to watch. It could make a big difference for the better with your nest egg. The clip is available to watch now through midnight tonight.]

As the day wears on, so does the knee-jerk reaction to headline news.

Heh — and the news breaks the very day the Fed convenes for one of its big every-six-weeks meetings.

And with that, the major U.S. stock indexes have pared some of the day’s big gains. Meanwhile, Treasury yields are falling, with the 10-year note now approaching the 2% mark for the first time in more than 18 months.

Gold is taking another run at $1,350 amid turbulence in the currency markets; European Central Bank chief Mario Draghi is signaling he’s ready to cut interest rates sooner rather than later.

Crude is up more than two bucks to $54 a barrel.

The Reuters newswire says the jump occurred after Trump announced plans for the meeting with Xi Jinping. Not true: About half of that rise took place before the tweet. Makes us curious who knew what. And when. And how they were in a position to act…

Also propping up the oil price is the news that Washington is dispatching another 1,000 troops to the Persian Gulf region amid the proverbial “mounting tensions” with Iran. Which reminds us of a more egregious media falsehood we encountered as we rubbed the sleep from our eyes this morning and opened the New York Times iPad app… 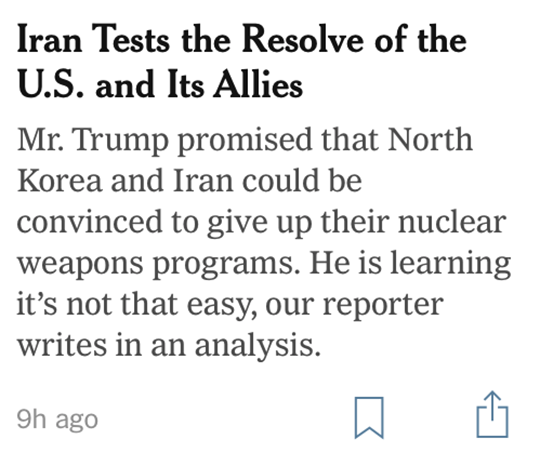 Iran has no nuclear weapons program. No one, apart from the most wild-eyed hawks in a couple of D.C. think tanks, asserts it does.

A National Intelligence Estimate from 2007 — a document reflecting the painstaking research of all 17 U.S. intelligence agencies — concluded that Iran gave up any ambitions for a nuclear weapon in 2003. And even that finding might be overblown, according to the exhaustive research published in Gareth Porter’s book Manufactured Crisis: The Untold Story of the Iran Nuclear Scare.

Even the president’s most hawkish advisers like John Bolton and Mike Pompeo are careful not to assert Iran has a “nuclear weapons program.” Why can’t the Times exercise a similar level of precision with its language?

Then again, this is the same paper that hyped up Saddam Hussein’s weapons of mass destruction and downplayed Stalin’s terror famine in Ukraine…

Bureaucracy, as only New York City can do it… 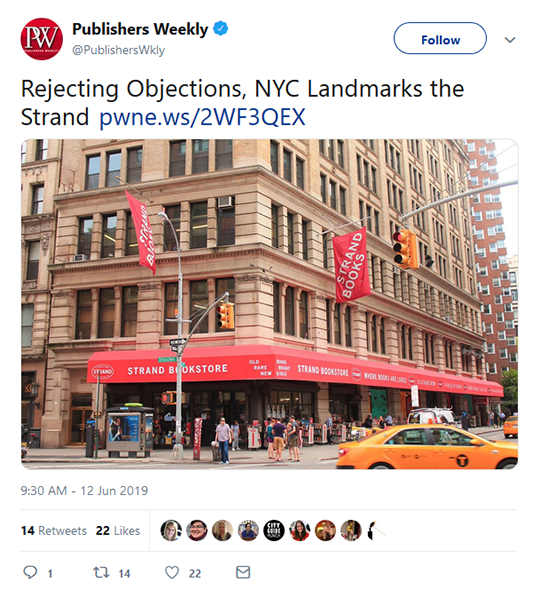 For enthusiasts of brick-and-mortar bookstores, The Strand is a destination — with 2.5 million volumes in stock. It’s been at 828 Broadway since 1957.

Last week, New York’s Landmarks Preservation Commission declared the site a landmark. The store’s third-generation owner is not happy. “Some people have congratulated me, and I said, ‘No, this is no congratulations. This is a punishment,’” says Nancy Bass Wyden.

More than a quarter of the 36,000 buildings in Manhattan have landmark status — which gives the committee almost total power over owners’ plans to modify, renovate, demolish or rebuild their properties.

And yes, she says the added compliance costs threaten the store’s viability.

Sorta makes you wonder if any developers greased the committee’s palms — with an eye toward acquiring the property at a discount. Nah, couldn’t be, right?

“Facecoin or whatever they decide to call it won’t be seeing me adopt it,” a reader writes after yesterday’s 5. “Why would I risk it?

“Facebook is, after all, the global beacon of safety, data security and privacy, right? Considering they already do whatever the heck they want with my data, including denying me access to some of it, why, oh, why would I or anyone else for that matter be foolish enough to trust them with our financial information?

“Just having close to 3 billion users it would have to be a hacker’s ultimate wet dream. Still, it’s not even the hackers I’m concerned most about as Facefail just sells or gives our data and personal info away.”

The 5: We’re sure you’re not alone (said the editor who deleted his seldom-used Facebook account five years ago).

On the merits (or lack thereof) of solar panels, our debate continues…

“Forget the energy calculation for a moment,” a reader writes, “and consider that Chinese-manufactured solar panels can have a carbon footprint payback of up to 30 years. The production of the solar-grade silicon for the cells is energy-intensive, and if that energy is coal-derived, then the carbon problem arises.

“If you are serious about the environment, then you might want to check out HPQ Silicon Resources of Canada. They have a plasma process for creating solar-grade silicon with up to a 96% lower carbon footprint and are planning on having a scaled production plant in process by year-end. Not only that but they can create metallurgical-grade silicon (98%-plus pure ⁠— think steel and aluminum alloys) at lower costs than traditional methods. And for added measure, the EV battery manufacturers are looking at using silicon in the anode to extend battery life up to 10 times.

The 5: Yeah, we’re not going to get into the middle of this one…

P.S. We recently made a significant change to our business at Agora Financial. And this change affects you.

Please review this message from one of our publishers. Because of its time-sensitive nature, the link will go dead at midnight tonight.