“Weak In the Knees”

By the time you read this, we’ll know whether the Federal Reserve delivered a surprise by cutting interest rates today.

Going into the announcement this afternoon, we’ll briefly mention a few random items for context and follow up tomorrow.

First, a cut would be a surprise… but it shouldn’t be a shock. Futures trade this morning is pricing in a 79% probability the Fed stands pat today and waits to cut until the next meeting in six more weeks.

That said, the esteemed Jim Grant of Grant’s Interest Rate Observer is figuring on today anyway. “The market has been conditioned to demand a rate cut when it feels a little weak in the knees,” he told CNBC yesterday. “I think they will cut more than once this year and they will start in June.” Meaning today.

“Weak in the knees” might sound odd with the S&P 500 only 1% below its record close on May 3… but if the Fed does make its move today, there’s precedent.

Looking back to the previous boom phase of the boom-bust cycle, the Fed’s first rate cut came in September 2007. Then too, the stock market was near all-time highs.

True, the market peaked the following month and then went on a sickening 57% slide over the next 17 months… but we’re getting ahead of ourselves!

Thing is, a cut today would look too obviously like caving to presidential pressure… and the power elite is keen to preserve the myth of “Fed independence.”

When we left you yesterday, Bloomberg TV was reporting that a few months ago the White House was looking into “demoting” Fed Chairman Jerome Powell. Not firing him as was rumored earlier this year but stripping him of the chairmanship; he’d once again be just another member of the Fed Board of Governors.

By late afternoon reporters had a chance to ask the president about this possibility. The response: “Let’s see what he does.”

In the meantime, the stock market is treading water — as it often does on these Fed decision days before the announcement at 2:00 p.m. EDT. The Dow and the S&P are up slightly, the Nasdaq down slightly.

“I don’t think this is the last we’ll see of this rejuvenated gold rally,” says chart hound Greg Guenthner. 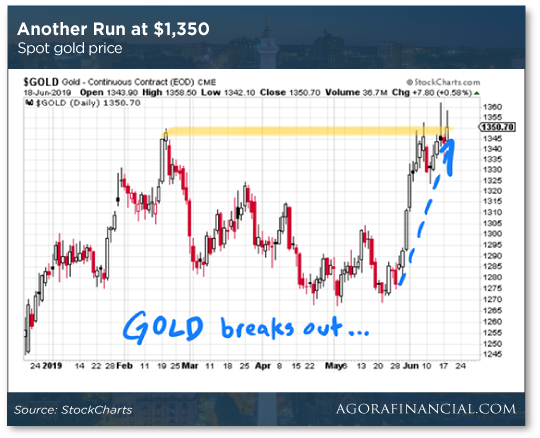 Quite the reversal of fortune, Greg says. Up until the end of May, “gold had repeatedly failed to put together an extended rally despite the sell-off in global equities and the escalating trade war. The trade war drama monopolizing the financial headlines should have been the time for gold to shine. Yet gold’s failure to gain any traction as stocks plummeted told us to stay away until conditions improved.

“But it took less than three trading days for the Midas metal to flip the script at the beginning of June. Gold quickly marched $45 off last week’s lows, sparking the strong breakout toward its recent highs.”

If gold can end this week above $1,350, that would be an excellent sign. Almost there…

Meanwhile, another precious metal is recovering from a vicious smackdown. “Palladium has also found new life this month,” Greg tells us, “surging off its May lows to approach $1,500 for the first time since March.”

Palladium rallied too far, too fast at the start of the year — even surpassing the gold price. Then the bottom fell out in late March with an 8% plunge in a single day. Greg wasn’t ruling out a drop all the way back to $1,200. “Fortunately for the bulls,” he says, “palladium never dropped materially below $1,300. 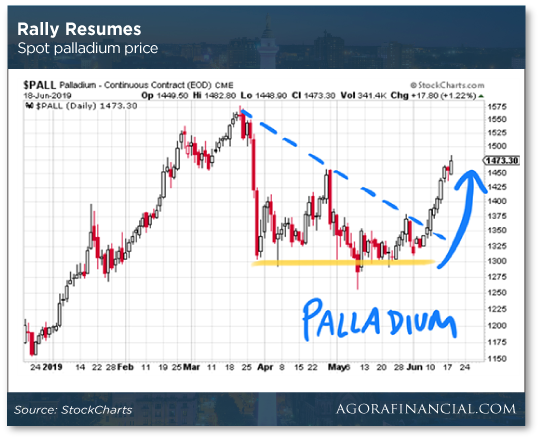 “Now palladium looks like it’s ready for another round of gains.”

Out with Boeing, in with Raytheon: Another government contractor will be keeping the seat warm at the top of the Defense Department.

For nearly six months there’s been no permanent secretary of defense. Until yesterday the acting secretary was Patrick Shanahan. But he’s withdrawn his name from consideration for the permanent post. Turns out there was a murky domestic violence incident from a decade ago when he was getting divorced; it would inevitably come up during Senate confirmation hearings.

Shanahan was noteworthy for his background — a long career at Boeing, rising to a vice president post, before joining the Trump Pentagon in 2017.

The new acting Pentagon chief is Army Secretary Mark Esper. Most of the media coverage plays up his active-duty days in the late 1980s and ’90s. It glides over his more recent experience — as a lobbyist for another defense contractor, Raytheon. He worked his way up to VP of government relations. The Hill named him one of the most powerful corporate lobbyists in D.C. in 2015 and 2016.

Not that that necessarily makes Raytheon a buy — there’s uncertainty surrounding its pending merger with United Technologies. But the defense sector as a whole is sure to keep coming out ahead.

The easiest way to play it is the iShares U.S. Aerospace & Defense ETF (ITA) — that is, if you don’t object to the blatant crony capitalism of the whole thing. (Drain the swamp? Ha…)

That was how Bloomberg put it. (Drudge linked to Yahoo Finance’s version of the story, which mistakenly attributed it to Fortune. It was Bloomberg.)

“Giving by individuals fell an estimated 3.4%, after adjusting for inflation, last year, according to a report released Tuesday by Giving USA,” the story says. “The numbers reflect the first year of the 2017 tax overhaul that expanded the standard deduction, a simpler way of filing taxes, but also excluded millions of taxpayers from claiming a tax break for donating to charity.”

All true… but a little incomplete.

How does that drop compare with other years? It’s not that hard to find Giving USA’s reports from the previous three years.

Is it not possible that after three years of healthy increases that the trend was due for a rest? At least Giving USA’s report acknowledges the steep stock market drop in the fourth quarter of 2018 might have had an impact on year-end contributions. (Reminder: 2018 was the stock market’s first down year in a decade.)

This trade war stuff is complicated, Part 1: The leader in domestic production of athletic shoes might nix plans to open another U.S. factory — thanks to tariffs.

As you might be aware, New Balance differs from the likes of Nike and Adidas in that it makes many of its shoes in the United States. The company’s five factories in New England employ more than 7,000 people.

But plans for a sixth factory are up in the air now. Turns out the equipment New Balance needs for the factory floor is… drumroll, please… made in China. And it would be subject to stiffer proposed tariffs.

“The proposed… tariffs will risk our company’s overall financial health, which will in turn limit our ability to maintain and reinvest in our American factories,” says a letter the company wrote to the Office of the U.S. Trade Representative.

Ironically, New Balance cheered Trump’s trade policies during the administration’s early days, the company’s VP of public affairs saying “things are going to move in the right direction.” Yeah, that was then…

This trade war stuff is complicated, Part 2: The proposed stiffer tariffs would also amount to a “Bible tax,” in the estimation of book publishers.

The 25% tariffs would encompass printed materials… and it turns out only China has the type of waterproof and nontoxic paper and printing technology required for many Bibles and children’s books.

“We believe the administration was unaware of the potential negative impact these proposed tariffs would have on Bibles and that it never intended to impose ‘a Bible tax’ on consumers and religious organizations,” says Mark Schoenwald, CEO of HarperCollins’ Christian Publishing division.

Adds Stan Jantz of the Evangelical Christian Publishers Association, “I know there’s a great interest in the area of religious freedom and access to religious goods on the part of the administration. We do hope that there would be an openness and strong consideration for Bibles in particular and also for books.’’

“Your observations about the tanker attack and the media coverage are interesting, but not too well thought out,” a reader writes after last Friday’s 5.

“First of all you should understand that not all evidence of responsibility will ever be provided, due to the method by which it was obtained, not wanting Iran to know.

“Also, the magnet mine that was removed was not suspended in the gulf and hit by the tanker but applied to the hull, as witnessed by the video. It is a logical conclusion from the fact that it was placed above the water line that it was placed by the same method as it was removed, namely by a high-speed Iranian patrol boat. There is an Iranian naval port close to the attack location and it is highly logical that the perpetrator would know of it and want to remove the unexploded mine.

“Lastly, why did Iran stop the freighter/tanker that rescued the crewmen from the attacked tanker and demand the crew? They are currently being held in Iran. They appear to be held captive against their will. Does this remind you of what happened at the U.S. embassy in Iran during Jimmy Carter’s presidency? How about when Iran detained the crew of a small U.S. craft off Bahrain or UAE a couple of years ago and forced them under gunpoint to confess to intentionally crossing into Iranian waters?”

The 5: The crew of the Norwegian vessel arrived in Dubai on Saturday.If you’re jonesing for a new hostage crisis, you’ll have to wait for another occasion.

For all we know, Tehran really did it. But for God’s sake, what business is it of Washington’s if Japanese and Norwegian vessels come under attack more than 7,000 miles from U.S. shores?

And the bit about “not all evidence of responsibility will ever be provided”? That’s the old “sources and methods” argument the national security state always uses to keep embarrassing information from becoming public. To take that argument at face value is to say that we citizens and taxpayers just have to trust the Big Important People in D.C. to do the right thing on our behalf.

Sorry, there’ve been too many mysterious “incidents at sea” over the course of U.S. history — the Gulf of Tonkin, the Lusitania, the Maine — that led to war and later turned out to be something other than what the Big Important People told everyday Americans.

So yeah, we’re going to exercise a degree of skepticism around here. Which is more than you’ll ever get from Pentagon press lackeys like Barbara Starr at CNN…

Yeah, cutting today would have looked like caving to the president. Jay Powell is speaking to the media right now. More tomorrow…