For the moment, the Federal Reserve has lit a fire under every major asset class.

We’ll get to stocks and bonds shortly… but oh my, look at gold. 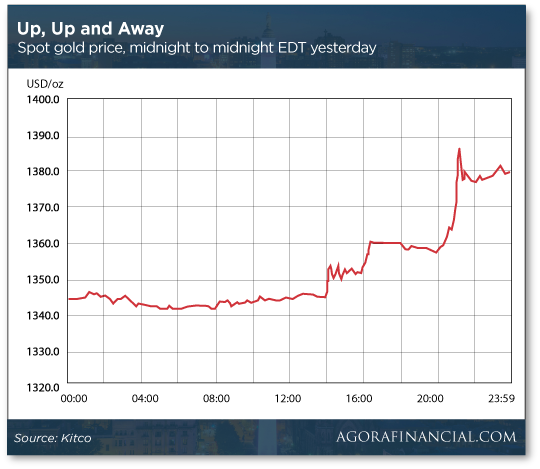 Going into yesterday’s Federal Reserve meeting, gold had already jumped from $1,280 to $1,340 in three weeks.

If this move can hold for the rest of this week, gold will likely bust through a ceiling of $1,350-$1,375 that’s been in place for five long years… 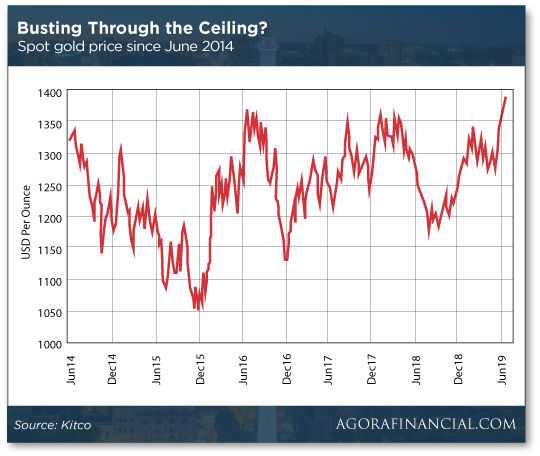 Meanwhile, with the Fed acting as wing man, stocks are once again flirting with all-time highs.

Against all “logic,” Treasury prices are rallying, sending yields plunging. You’d think that if the Fed is signaling “easier money,” it would make investors question Uncle Sam’s creditworthiness and drive interest rates up.

But no — not when there’s $12.5 trillion in debt sloshing around the world that carries a negative interest rate. Under those circumstances, Uncle Sam’s credit risk is comparable to Daddy Warbucks’. With hot money flooding into Treasuries, a 10-year T-note carries a sub-2% interest rate for the first time since November 2016.

In short, the Fed said all the right things — if the objective is to prop up financial assets.

Notably, it removed the word “patient” from its lexicon.

“Patient” is a word the Fed uses from time to time to telegraph its intentions. Fed chairman Jerome Powell trotted it out shortly after New Year’s Day. As our Jim Rickards explained at the time, it meant, “no rate hikes until we give you a clear signal.”

“Patient” was still there in a key sentence of the Fed’s statement after its last meeting six weeks ago: “In light of global economic and financial developments and muted inflation pressures, the Committee will be patient as it determines what future adjustments to the target range for the federal funds rate may be appropriate to support these outcomes.”

But with weakening economic numbers, and no end in sight to the trade war (not really), the Fed is now teeing up at least one and maybe two or more rate cuts before year-end.

Here’s the revised version of the sentence as of yesterday. “Patient” is nowhere to be found: “In light of these uncertainties and muted inflation pressures, the Committee will closely monitor the implications of incoming information for the economic outlook and will act as appropriate to sustain the expansion, with a strong labor market and inflation near its symmetric 2% objective.”

“Appropriate” appears to be the new buzzword. Powell used it seven times during the opening statement of his press conference.

The market’s mindset at present is that of a little kid who’s been under the weather and doesn’t want to recover right away because the cough syrup is so tasty.

This “appropriate” analogy comes to us courtesy of our income maven Zach Scheidt, whose young son expressed that very sentiment recently: “But I don’t WANT to feel better yet!”

Wall Street was feeling punk in May thanks to those weak (but hardly dire) economic numbers and the ever-present trade tensions. Thus the S&P 500 sold off nearly 7% in May.

And what do you know, “the Fed is ready to pour a dose of berry-flavored medicine,” says Zach. “The spoiled-kid investors are getting exactly what they’ve been whining for.”

Zach says two sectors are set to outperform now that the Fed is preparing to pour out the sickly-sweet syrup.

“First,” he says, “I’m excited to see growing strength in international blue chip dividend stocks. “These companies are benefiting from lower interest rates, which have caused the dollar to pull back and made international companies more competitive.

“Second,” Zach says, circling back to where we began today, “it’s time to put more capital into gold and other precious metal opportunities.

“With lower interest rates, the value of the U.S. dollar will naturally fall. And that’s already pushing the price of gold higher. Now is a great time to put some extra capital into gold so you profit from gold’s breakout.”

If you want easy exposure to the metal, we like the VanEck Merk Gold Trust (OUNZ). Yes, there are bigger and more popular bullion ETFs, but VanEck has been deep into precious metals for more than 50 years. If you’re up for a more ambitious risk-reward proposition, you can buy a basket of mining stocks with the VanEck Vectors Gold Miners (GDX).

[Ed. note: Zach is a man on a mission — specifically to show 100 Americans how to become millionaires by collecting their own version of Wall Street’s lucrative bonuses.

Spots are filling quickly and we can’t guarantee one will be left when you click this link. And whether or not we fill the available spots, we’re closing access at midnight tonight.]

Crude prices are up nearly 6%, pushing $57 a barrel for the first time this month, after — well…

On the one hand, it’s hard to believe Tehran would purposely ratchet up the tensions if the drone stayed outside Iranian airspace. On the other hand, it’s an easy way for Tehran to “send a message” without inflicting any real harm.

Whatever the case, the timing is unreal: Less than 24 hours ago, The Daily Beast had a couple of intriguing scoops that went viral: First, that the president “has privately pushed his representatives to walk back their tough talk on Iran”… and second, that Fox News host Tucker Carlson has had the president’s ear in recent weeks. Carlson is a vocal skeptic of U.S. intervention in the Middle East.

Is it too far-fetched to wonder if hawkish elements of the “deep state” ordered the Navy to have one of its drones graze Iranian airspace to “force an incident” and put the president back on the warpath?

This isn’t a Trump thing. There’s a long history of the national security state subverting the commander in chief. Late in Obama’s term, we recounted how the Pentagon sought to undermine U.S.-Russian cooperation in Syria’s civil war.

Way back in 1960, President Eisenhower had grounded the CIA’s U-2 spy planes as a gesture of goodwill to the Soviet leader Khrushchev. But CIA chief Allen Dulles kept flying them anyway, and the Soviets shot down Gary Powers. No doubt to Dulles’ delight, the incident blew up plans for an Ike-Khrushchev summit.

In any event, the likelihood of all-out war or even “limited” U.S. air strikes still seems remote — for now.

Corey Stewart ran Trump’s 2016 campaign in Virginia, and he probably speaks for large portions of Trump Nation: An Iran war “would be a disaster for him and the country getting into another military engagement in the Middle East,” he told The Associated Press last month.

Somehow we doubt a lost drone and a couple of dinged-up tankers would change that. But a drip-drip of incidents like this all summer could certainly tee up a fall campaign that “something’s gotta be done.” We come back to the famous words of Bush 43’s chief of staff Andrew Card in the run-up to the Iraq war: “From a marketing point of view, you don’t introduce new products in August.”

A fall demonization campaign against Iran would also serve to throttle impeachment proceedings. Can’t have any distractions while Washington is putting itself on a war footing, right?

Really, it’s a perfect way to box in the Democrats. House Intelligence Committee chairman Adam Schiff (D-California) is one of the most foaming-at-the-mouth Russiagate fanatics. But when the subject of Iran comes up, his only complaint about White House policy is that the president is unable to “persuade our allies to join us in any kind of response.”

It was a fine visual to announce a huge business deal — were it not for the identity theft thing.

The Paris Air Show is this week — the world’s biggest exhibition for the aircraft and aerospace industry. Many deals are announced there, complete with a ceremonial contract signing in front of the media.

“Actually, Christian, my CFO authorized me to give you the American Express,’’ he joked. “We had to increase the limits quite a bit.” 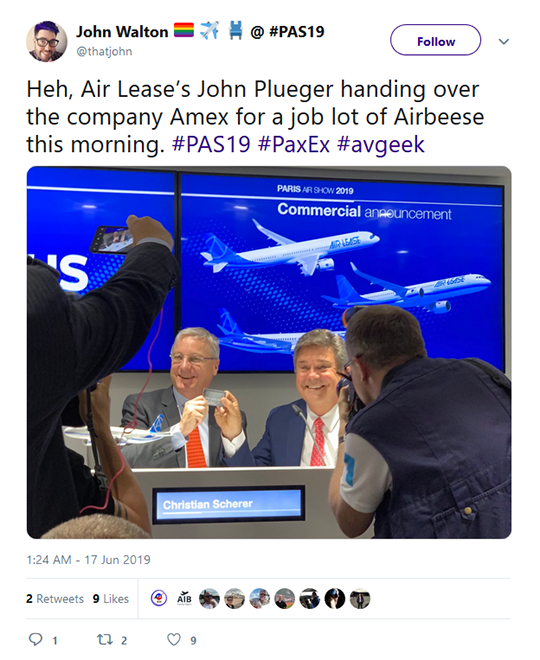 A terrific moment for the press photographers to capture — except for the fact that’s Plueger’s real credit card and the numbers were plain to see.

He had to cancel the card.

Plueger’s partner in Air Lease, Steven Udvar-Házy, offers some advice for the next photo op — “a simple American dollar.”

“Amen to your skepticism about the tanker attack in the Gulf of Oman,” a reader writes after yesterday’s 5.

“The Maine and the Lusitania were well before my time, but I sure remember the Gulf of Tonkin Resolution, which basically ceded war-making power from Congress to the president, and all that has followed from that disastrous vote.”

The 5: As long as we brought up the topic of the national security state undermining the president earlier…

The journalist and historian Gareth Porter spent many hours poring over declassified Gulf of Tonkin files in the Lyndon Johnson Library for his 2005 book Perils of Dominance.

His conclusion? “Secretary of Defense Robert S. McNamara misled LBJ by withholding from him the information that the U.S. commander in the gulf — who had initially reported an attack by North Vietnamese patrol boats on U.S. warships — had later expressed serious doubts about the initial report and was calling for a full investigation by daylight.

“That withholding of information from LBJ represented a brazen move to usurp the president’s constitutional power of decision on the use of military force.”

Funny how history rhymes down through the decades…

P.S. If you need to kick-start your retirement, a simple three-minute phone call could accelerate your plans by months or even years.

And if you get started before the clock strikes midnight, so much the better — details here.