“It’s entirely possible that Huawei might implode as a result of all of this,” says technology journalist Owen Williams at Medium.

Of course, the “this” Mr. Williams refers to is the Commerce Department’s very cloak-and-dagger “Entity List” of 69 companies the U.S. banned because of suspected intellectual property theft, all-out spycraft and — lest we forget — the trade war.

Because of the ban, U.S. companies lined up to cut ties with the Chinese tech giant Huawei; Google, for example, pulled its Android licensing, Intel refused its laptop CPUs and even Cambridge, England-based chip designer ARM stopped selling phone CPUs to Huawei.

“If any of these things happened in isolation,” says Williams, “Huawei might have been able to weather the storm until one side of the U.S.-China trade war backed down.

“But it’s hard to imagine the company lasting the year without falling apart,” Williams says, “unless there’s rapid political resolution….”

Which is saying something: Huawei is on the top-10 shortlist of most valuable tech companies in the world, right up there with Microsoft and Google.

“The company is a juggernaut at home in China, where it rapidly outpaced Apple’s growth to become the most popular smartphone brand.” And Huawei’s smartphones — less expensive than iPhones — have cornered the Asian and European markets, too.

Not that Huawei’s a one-trick pony…

“The company is a huge player in the infrastructure space, too, building out submarine cables to connect countries and mobile networks  —  including 5G  —  as well…

“Huawei’s lead in 5G-based technology has surprised experts and the competition,” the article continues, “leaving old-school tech infrastructure players like Nokia, Siemens and Ericsson years behind, struggling to keep up.”

According to Williams, there’s the rub. “5G is where this mess really started: a fight for supremacy over the next generation of mobile technology…”

Technology’s current holy grail — 5G — that promises lightning-fast speed, efficient networks… and the opportunity to dominate tech infrastructure for the next decade or so.

“What this is arguably all about is political power and the potential for 5G to reshape a generation of connectivity,” Williams contends.

To that end, China’s not going to look the other way while a company like Huawei’s sacrificed on the trade war altar.

“We should all worry about what China will do in response,” Williams says. He believes China holds the most critical cards when it comes to technology — control of much of the world’s manufacturing and a cache of in-demand rare earth metals.

“If [China] wants to strangle the industry, it could raise the cost of exporting goods and acquiring rare earth metals, or impose taxes on products made there.”

Williams says: “No matter your stance on the company and the politics surrounding it, what happens next is likely to be bad for tech and the global economy.

“Huawei’s downfall might finally pop the [tech] bubble once and for all.” 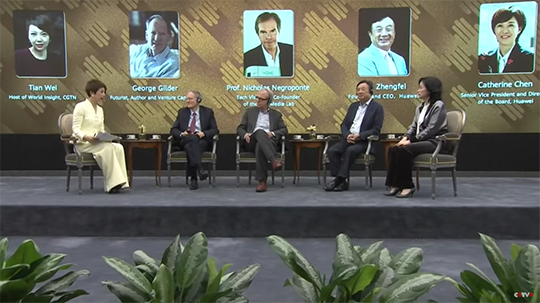 “I believe the trade war Trump is waging with China is an incredible mistake,” George says in an Op-Ed at The Wall Street Journal.

“And… the collateral damage being done to our relationship with Chinese technology leaders — specifically Huawei — might be irreversible.”

George believes the U.S. has much to learn from Huawei: “We should not be blocking Huawei from doing business with American companies. Quite the opposite… We should be embracing the company and its technology leadership.”

Of course, George’s point of view is contrarian, in direct opposition to the White House party line… that he believes is inherently flawed. Here’s why…

Fallacy 1: Huawei Is a State-Run Company

“State-owned enterprises in China have steadily shrunk as their private firms have boomed,” George says. “Today, Chinese government spending on businesses has dropped to around 17% (compare that with the U.S. at nearly 40%.)

“The claim leveled most frequently against Huawei is that it steals,” George says. “But rival technology companies necessarily imitate one another — and use common components under industry standards.

In recent years, however, “[Huawei] has paid U.S. chipmaker Qualcomm more than $1 billion in royalties… And it’s purchased billions of dollars’ worth of chips from American firms.”

The final red flag Huawei raises is an inescapable fact — Chinese Companies Have Communist Ties (But just how strong are those ties?)

“Nearly all Huawei’s American critics implicitly deny that it is possible to accommodate Chinese capitalism without supporting Chinese communism,” says George. And while George has spent much of his career fighting communism, he believes there’s a workaround.

“The truth is,” he says, “while I recently spent a month in China, speaking at many of their major universities, I scarcely met a real communist.

“I actually find Chinese students to be more capitalist in their views than American students,” he continues. No surprise there. Ber-nie! Warr-en! A-O-C!

“And I hate to say it, but without the help of Chinese capitalism, we’re pretty much over as a global power and economy.”

[Ed. note: Over the past 30 years, George has been spot-on with his predictions about the biggest technology revolutions in history.

Now he’s come out of retirement to share what might be the biggest technology disruption in history — a disruption so big, the ramifications will have serious impact on your daily life. From banking… to travel… to media.

It’s all about to get turned upside-down.

And disruptions this big bring with them massive moneymaking opportunities.

It’s all going to be revealed at an invitation-only online event Tuesday, July 2, at 1 p.m. EST.

All you have to do is click to register for this event.]

The notable hedge fund manager told Bloomberg on Jun. 12: “I think one of the best trades is gonna be gold. If I had to pick my favorite [bet] for the next 12–24 months, it’d probably be gold,” he said.

According to Jones, his prediction was based on a confluence of events — the Fed’s dovish stance and the ever-present geopolitical tensions.

“You mean I can no longer bring a six pack of Belgian beer back home in my bag after a trip to Brussels?” asks Eurostar passenger Will Roberts. “That’s crazy!”

The high-speed Eurostar railway that connects England to France and Belgium via the “Chunnel” tried to quietly amend its alcohol policy for passengers.

The new policy? Passengers are now restricted to carrying one bottle of wine aboard or four beers. Absolutely no spirits.

And passengers are pissed (and we mean that in the American sense of the word… although the British euphemism might apply here, too. See Exhibit A below.) 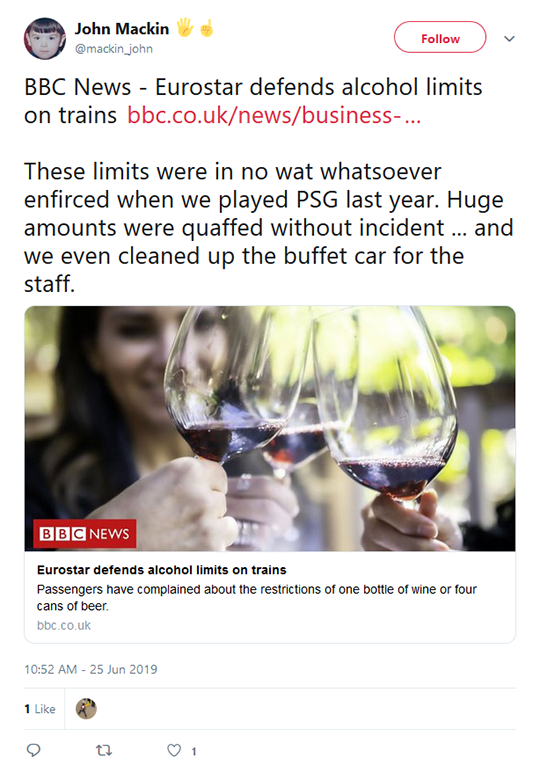 Is it just us… or is this guy drunk tweeting?

Eurostar says: “This decision was made to maintain a pleasant environment on board for all our travellers. Those that wish to take more with them for consumption at home can do so using our registered luggage service, EuroDespatch.”

Rail expert Mark Smith tells the BBC: “Previously, [Eurostar’s] policy was easygoing, it was sort of what you would expect.

“I’m aghast at the change, it seems draconian.”

P.S. Back in March, former Wall Street exec Nomi Prins predicted Allergan might get acquired… and today it’s in the headlines.

In fact, Nomi’s readers at Dark Money Millionaires were positioned to profit from the takeover, making a 78% gain!

Find out how she expects a new market anomaly to unleash billions into the market tomorrow, between exactly 12:45 p.m. and 1:15 p.m.