The Internet: More Fragile Than You Think

Baltimore city water bills won’t be mailed for a second month in a row after the May 7 ransomware attack disabled the city’s cyber infrastructure.

Instead, Baltimore’s deputy chief of staff Sheryl Goldstein recommends residents use their last bill — from three months ago? — to guesstimate what they owe and mail in a check.

And this is mighty nice of officials: “The city will not charge late fees or penalties for payments missed while the system is offline,” reports The Baltimore Sun.

Going on day 51 of major system outages in Baltimore — sorta makes you wonder if the city should’ve just paid the $76,000 in bitcoin that hackers demanded? (We know, we know… “We don’t negotiate with terrorists.” Right?) 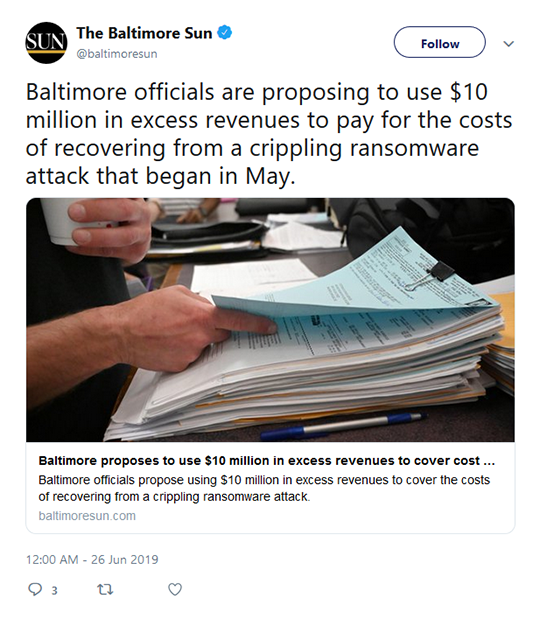 They’ve got $10 million under the sofa cushions? Who knew?

Of course, Baltimore isn’t the first U.S. city under cyberattack… nor will it be the last. The treasure trove of data is just too tempting for hackers.

So today, to better understand the extreme fragility of the internet (hint: It’s worse than you think) and the solution for it, we give the floor to best-selling author, investor and technology futurist George Gilder…

“I believe that all major revolutions are ultimately information revolutions.

“In 1517, Martin Luther posted his 95 theses on the door of the Castle Church at Wittenberg, Germany, precipitating the Reformation.

“That, in turn, triggered the Renaissance.

“The Renaissance, with its multiplication of books from a few hundred controlled by bishops to millions controlled by the people, was a revolution comparable to the one we are witnessing now — though few are aware it’s even taking place, let alone grasp the significance of this revolution.

“This latest information revolution I refer to involves no less than a complete upheaval of the entire foundations of the internet. By the time it’s complete, the internet we’ve all grown used to will be completely different — and so too will the world.

“To better understand what I’m talking about, let’s step back a moment.

“In 1990, I wrote a book called Life After Television. In it, I declared that the computer of the future would be as portable as your watch and as personal as your wallet. It would recognize speech. It would navigate streets. It would collect your news and your mail. It might not do Windows, but it would open doors.

“Another prediction I made is that in a world where these computers have become ubiquitous, no one would have to watch any advertising they didn’t want to see.

“Now, as you know, that didn’t come true. But why? In short, it’s because we had a Google coup.

“Today’s internet is based on advertising. However, that was never the plan or the intention. It’s just something we’ve all sort of ‘stumbled’ into.

“And so, from its decentralized, cypherpunk origins, the internet evolved into what we’re all now familiar with: a centralized, corporatized, top-down system.

“And at the helm are behemoths like Google and Facebook, which receive the bulk of the advertising revenue.

“This allows them to offer their products for free… However, this has come at a cost. Perhaps the most important is our privacy.

“The current internet has no security to speak of. Giant hacks into corporate and government databases — and the subsequent release of millions of people’s personal information — have become commonplace.

“The reason for this, the reason security has completely broken down, is because the internet is so centralized.

“All our private data reside in a bunch of corporate data centers scattered about the landscape and all it takes is for some careless IT administrator to forget to update to the latest version of a piece of software and, oops, suddenly hackers now have access to the whole treasure chest — and there’s nothing you or I can do about it.

“The 2017 Equifax hack is a perfect example.

“‘The credit-reporting giant had more than two months to take precautions that would have defended the personal data of 143 million people from being exposed,’ Wired reported. ‘[But] it didn’t.’

“So what’s needed is a new security model for the internet. A new security architecture. Because what we have now is a porous, perforated internet….

“The ideal would be one that keeps information, data and ID at the bottom of the stack, such that everyday users own their own data and their own identities.

“That kind of a decentralized vision — where we have each reclaimed our digital lives and are no longer at the mercy of third parties — would be a major breakthrough.

“Right now, a new breed of innovators is leveraging the power of cryptography (essentially the science of making communication secure) to create a trust-based internet.

“One that will allow us to maintain the sovereignty of our information, our data and our identities.

“But it’s more than that. Because by cleverly applying these cryptographic mechanisms in ingenious new ways, the rules of online commerce themselves are being rewritten — creating enormous opportunities for those willing to take advantage as these developments take root.

“Years ago, I used to work for a president. Some abhor him. But many remember him fondly. Either way, Ronald Reagan once famously said, ‘Tear down this wall.’

“I now say this too.

“I say tear down all these walls that keep us separated from our online lives and digital identities. ‘

“Tear down the walls that surround the big walled gardens of Google, Apple, Facebook and Amazon.

“Disperse the clouds. Open the skies to sky computing, where everybody participates.

“Let us regain the internet again. Not a winner-take-all internet. But an internet in which we can all be winners again.”

By clicking the link, your name will be added to the attendee list.

As a bonus, after the event is over, you’ll be the first to receive Gilder’s brand-new e-letter, Gilder’s Daily Prophecy.

The Commerce Department issued its preliminary monthly report on orders for durable goods, including everything designed to last three years or longer: from microwaves to lawnmowers. The headline number shows overall durable goods orders missed analysts’ expectations, declining 1.3% in May compared with a drop of 2.8% in April.

To the markets, where the price of oil’s spiked 2.7% to $59.38 per barrel on news of a widespread supply drop… The Energy Information Administration reports that U.S. crude inventories fell by 12.8 million barrels last week.

“FedEx Corp. is having a tough time staying in the air,” says Agora analyst Greg Guenthner.

“The shipping company is looking for excuses to fill its planes as other companies are adapting to short delivery distances from local distribution centers.” In other words, FedEx hasn’t prepared for instant-gratification e-commerce… 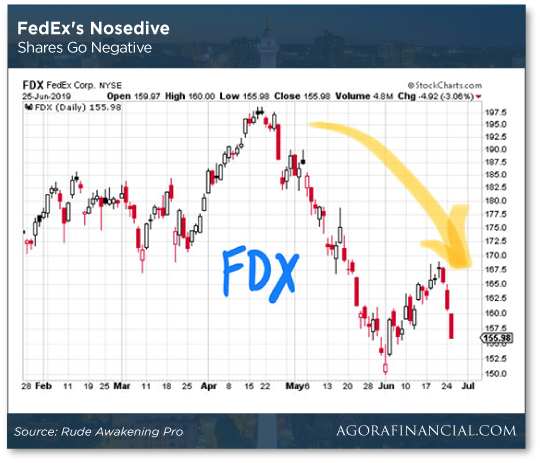 Investors were deflated yesterday as FedEx shares crashed more than 3% for negative returns on the year. “The stock peaked in April and has yet to recover,” Greg says.

And FedEx is indicative of what’s going on with the transportation sector as a whole. “Following a hot start to 2019,” he says, “the transports are now trailing the Dow industrials by more than 3% year to date.”

To the point, we mentioned FedEx returning a Huawei phone to sender with a nastygram that said: “Parcel returned by FedEx, due U.S. government issue with Huawei and China government.”

They covered all their bases…

The incident has since sparked a lawsuit against the Commerce Department. “In court filings in the District of Columbia,” CNBC reports, “FedEx said it should not be expected to enforce the export ban, and could not reasonably be held liable for shipping products that it did not know about.”

The filing goes on to say trade war restrictions “essentially deputize FedEx to police the contents of the millions of packages it ships daily even though doing so is a virtually impossible task, logistically, economically and, in many cases, legally.”

For those not hip to school mascots, UI is home of the Vandals.

(Odd… but we checked it out. The university came by the weird moniker when a sports reporter said the school’s basketball team played with such ferocity, they “vandalized” their opponents. That was in 1917. By 1921, the school’s Liberal Arts department petitioned school administrators to be called the Vandals. It stuck.) 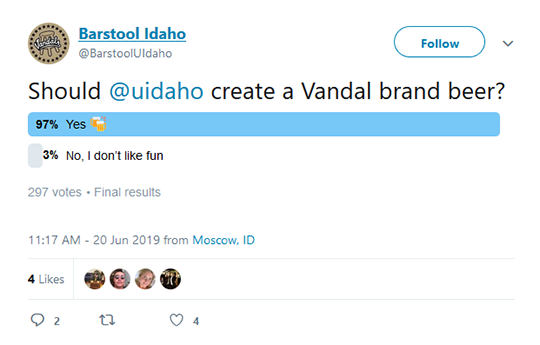 No fun, indeed… and way to squelch that entrepreneurial spirit!

P.S. George Gilder kicks everything off with a video event on July 2, where he’ll reveal his prediction…

And tell early adopters about the future technology that will reshape the internet and global markets.

There’s a two-minute video recorded for you… take a look and reserve your FREE spot.