“Was the use of ‘racket’ purposeful or a Freudian slip?” writes a self-described longtime reader — after I used that word on Friday to describe my previous profession in broadcast news.

“I ask,” the reader goes on, “because I and almost all of the people I talk to about the current news racket have lost or are continuing to lose all trust in newspapers, TV news and all mass media news sources.

“So much of it is fake and lies. Rather than try to determine what can be trusted and what cannot, we simply don’t trust any of it and skip it all.

“So if as you say the news industry is shedding jobs, then they deserve and earned it.”

The answer is I used “racket” on purpose. Nor was it the first time. And your suspicions are well-founded.

But as I mentioned on Friday… even as media outlets are cutting jobs, the elites at the very top of the elite-media profession are doing very well, thank you.

Indeed some of them were hobnobbing in the Hamptons on Saturday night with the most powerful people in finance and politics — you know, people the media are supposed to hold accountable.

There was a “pool” reporter on hand whose account of the soiree was picked up by Politico yesterday: “Lally Weymouth reigns as the leading Hamptons host of the most bipartisan gathering of leading political luminaries dancing all night to a fab band playing golden oldies.”

Elizabeth Morris “Lally” Graham Weymouth is a scioness of the Graham family, owners of The Washington Post for many decades before they sold it to Amazon’s Jeff Bezos in 2013. At 76, she still holds the title of “senior associate editor” at the paper. 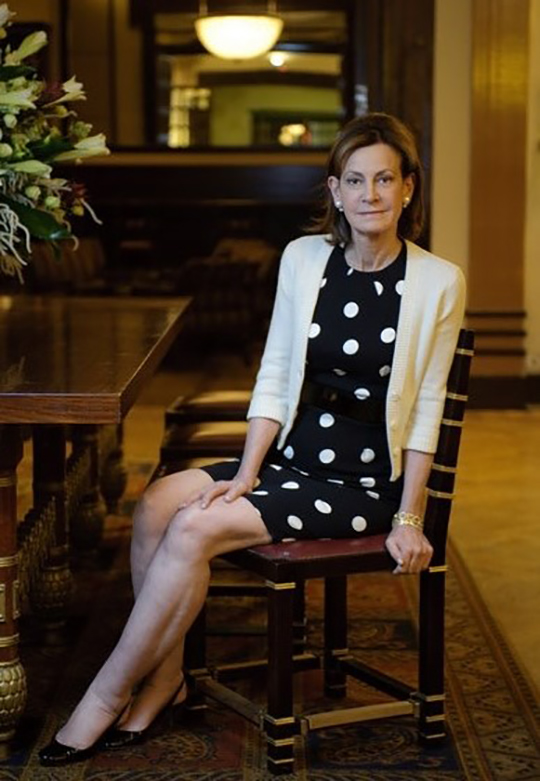 It appears a good time was had by all: “Salmon, chicken, steamed summer vegetables and the best corn pudding in the Hamptons were served.”

And then… in the best style of a newspaper’s “society page” in days gone by… was a comprehensive listing of the people seen there.

We’ve highlighted the media figures in this screenshot… but the whole list is worth your time. 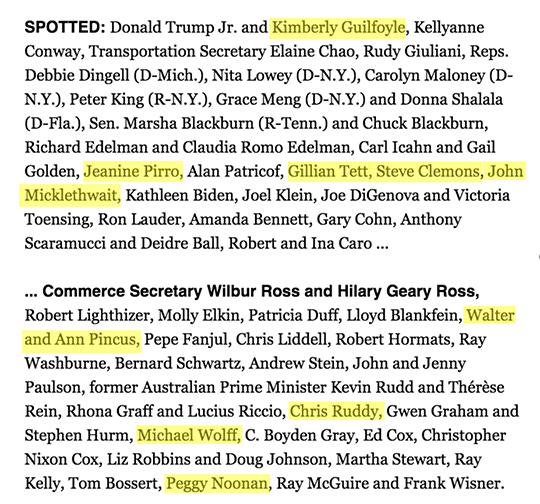 Maybe you don’t recognize all the media names. We’ll tell you who they are and why they matter in just a moment.

But first, we want to spotlight a few of the other names on the list — because at first glance, you might not think they’d be partying together, least of all with media types:

OK, you get the idea — especially when you see these names alongside politicos like Elaine Chao (Cabinet secretary and the wife of Senate Majority Leader Mitch McConnell) and Rep. Donna Shalala (Clinton Cabinet member, then for many years president of the University of Miami).

But the media figures who took part in the soiree? Hoo boy…

One of the things I pointed out in our “Freedom Underground” video series that debuted on Friday is that in decades gone by, journalists came from the working class. By one estimate, as recently as the 1950s only half of journalists had anything more than a high-school diploma. They were like their readers. They had a scrappy mindset. They had no compunctions about holding powerful people accountable.

Nowadays, many journalists have a master’s degree and they run in the same cocktail party circuit as the rich and powerful people they cover. I saw this phenomenon unfolding in real-time during my 20 years as a TV news “gatekeeper.”

“It’s a big club, and you ain’t in it,” was the George Carlin line we invoked on Friday when discussing how Big Media have become one with America’s power elite.

Running down this list of grandees and their backgrounds brings to mind a passage from Tragedy and Hope, by Georgetown poli-sci professor Carroll Quigley — whose many famous students included Bill Clinton.

“The argument that the two parties should represent opposed ideals and policies, one, perhaps, of the Right and the other of the Left,” Quigley wrote, “is a foolish idea acceptable only to doctrinaire and academic thinkers.

“Instead, the two parties should be almost identical, so that the American people can ‘throw the rascals out’ at any election without leading to any profound or extreme shifts in policy.”

That passage from Quigley’s book has rightly achieved a measure of fame. But there’s a less well-known passage that’s even more relevant for our purposes today.

“The powers of financial capitalism had another far-reaching aim, nothing less than to create a world system of financial control in private hands able to dominate the political system of each country and the economy of the world as a whole.

“This system was to be controlled in a feudalist fashion by the central banks of the world acting in concert, by secret agreements arrived at in frequent private meetings and conferences.”

When Quigley published Tragedy and Hope in 1966, America still had a thriving middle class. No more — thanks to the “feudalist fashion” of systemic control.

At the same time, the elites who control the flow of information often have early access to market-moving news. And you can be sure they act on that access for their own financial benefit.

Once the news becomes public, it’s too late for struggling Main Street investors to act on it. Once everybody knows about it, the big money’s already been made.

But… What if there were a system that could detect market-moving news before it went public?

If that sounds too good to be true, you really don’t want to miss today’s installment in our “Freedom Underground” video series. You’ll learn from a veteran trading insider how it’s possible to sniff out market-moving news in advance — allowing you to profit alongside the power elite.

The video went out at 1:00 p.m. EDT in an email with the subject line “The Canary.” If you haven’t seen it already, you can check out a replay at this exclusive website — where you can also catch up on previous segments in the “Freedom Underground” series.

Thanks for indulging us a single-topic episode of The 5 today. I hope you learned a thing or two about how the world really works.

P.S. The markets, you ask? Not much to say. The major U.S. stock indexes are again in retreat after those record highs last Wednesday. Gold remains a bit below $1,400 but above the important $1,375 level that marked the ceiling for more than five years.

P.P.S. From The Associated Press: “Nearly one-quarter of Americans say they never plan to retire…

“According to the poll from The Associated Press-NORC Center for Public Affairs Research, 23% of workers, including nearly two in 10 of those over 50, don’t expect to stop working. Roughly another quarter of Americans say they will continue working beyond their 65th birthday.”

For most of those people, it’s not because they love their work. It’s because they have no assurance of a comfortable retirement income.

Like the hollowing out of the middle class, the can’t-afford-to-retire phenomenon is a stunning shift in America since Tragedy and Hope was published in 1966.

But if “The Canary” I mentioned a few moments ago is onto something — and I’m absolutely convinced he is — it might be possible for everyday folks like you to collect payouts from the markets very much like those of elite financiers and politicos — to say nothing of the media figures who control the news flow.

Again, you can watch the latest installment in the Freedom Underground series at this link. You can also view previous segments going back to the debut last Friday. Check it all out right here.