After six long years in the wilderness, “gold has now broken out to the upside,” says Jim Rickards.

And it’s been a long time coming.

Some history: Gold set a record of $1,900 an ounce around Labor Day 2011. It was downhill from there. By early 2013, it had broken below $1,650 and our resident chart hound Greg Guenthner declared gold was in a bear market — much to the consternation of our longer-term gold bug readers. 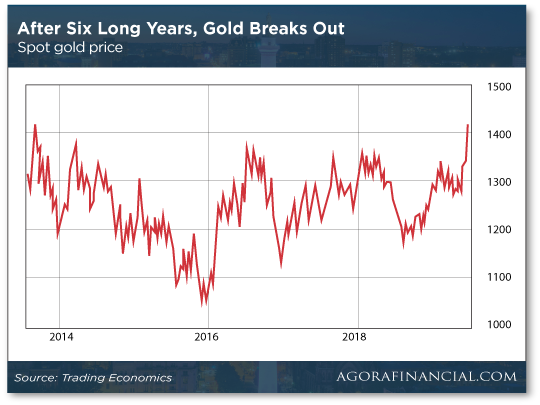 Yikes, that chart is the classic picture of an asset that’s “range-bound.” The peak during those six years came three summers ago, around $1,375, when global markets freaked out over the Brexit referendum in Great Britain.

And with that, “a new multiyear bull market has now emerged,” Jim goes on.

“Turning points from bear to bull markets (and vice versa) are not always recognized in real time because investors and analysts are too wedded to the old story to see that the new story has already started.”

Jim’s being overly modest here. The Dec. 11, 2015, episode of The 5 featured highlights of a conversation between Jim Rickards and Jim Rogers, the legendary “adventure capitalist” and best-selling author. Together, they darn near called the bottom on the above chart — to the day.

During that conversation, Rogers laid out a truism: “No commodity goes from a baseline to a permanently new high without a 50% retracement along the way.”

That’s exactly what happened during gold’s first bull market in the 1970s. After President Nixon cut loose the dollar’s last moorings to gold, the dollar price of gold zipped up from $35 in the summer of 1971 to $200 by late 1974.

And then it got cut nearly in half, bottoming out around $105 in September 1976.

At that moment, when nearly everyone was ready to throw in the proverbial towel, gold took off again — all the way to the peak of over $800 in January 1980.

The next bull market in gold began around $200 in 1999. In the long-term scheme of things, it’s still underway — but oh, that “retracement” was a doozy. 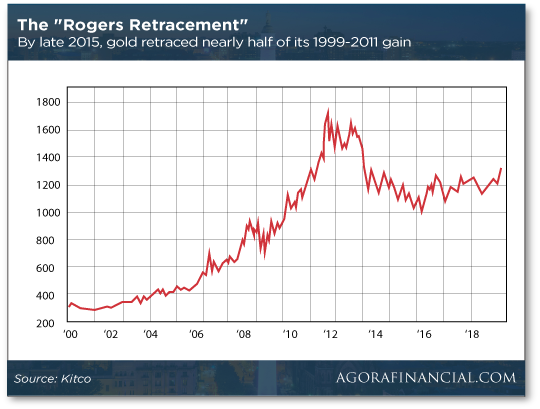 Note the price of $1,375 in the summer of 2016 on that chart. Now you get a visual sense of why a breakout above that level is such a big deal.

So why the breakout now, you ask?

“From both a long-term and short-term perspective, there are three principal drivers,” says Jim Rickards: “geopolitics, supply and demand and Fed interest rate policy.”

That’s especially true after Fed Chairman Jay Powell’s testimony to Congress on Wednesday. This morning, traders in fed funds futures are pricing in a 100% probability of a rate cut at the end of this month — and 27% probability the cut will be a generous half percentage point.

After a short dip below $1,400 this week, gold instantly reclaimed that level when a transcript of Powell’s prepared statement was released Wednesday morning… and it’s held the line on $1,400 since.

Gold has emerged from its range-bound wilderness. No time like the present to hedge the rest of your portfolio with the Midas metal.

Jim has long recommended a 10% allocation — not a gold ETF but the real deal, actual metal you can hold in your hand, and for God’s sake don’t store it at a bank.

How do you make that happen — especially if this is your first time acquiring the Midas metal?

We’re admittedly biased, but we love the Hard Assets Alliance. Hard Assets Alliance allows you to buy and take delivery with exceptionally low costs. Or, with a single click, you can buy and store your metal in your choice of seven audited vaults worldwide. And the interface on the website is brain-dead simple to navigate.

If you set up an account at this link, we’ll send you six free bonus reports, including Jim Rickards’ Perfect Gold Portfolio. You don’t even have to fund your account to claim the reports, so there’s no risk in clicking.

Full disclosure: Agora Financial was an original member of the Hard Assets Alliance a few years back and more recently purchased a stake in the company itself. But that’s only a reflection of how impressed we are by what it can do for everyday folks who want exposure to precious metals.

After closing above 27,000 for the first time yesterday, the Dow stands as we write at 27,218. Meanwhile, today might be the day the S&P 500 can notch its first close over 3,000. Weekly closes in record territory are bullish indeed.

The lone economic number of the day is wholesale prices — up 0.1% for the month and 1.7% for the year as expected. Nothing here to dissuade the Fed from a rate cut at the end of the month. 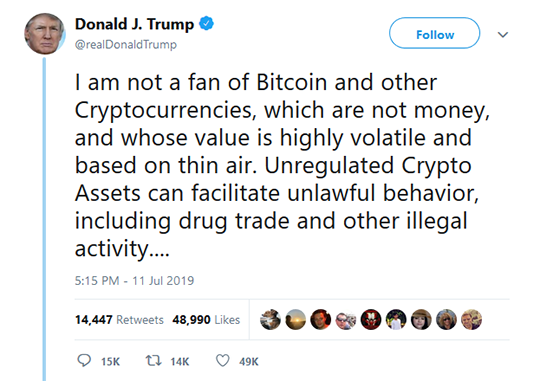 Dang, he played the “drug trade” card. If he’d tossed in “terrorism” and “money laundering,” he could pass for any card-carrying member of the deep state! 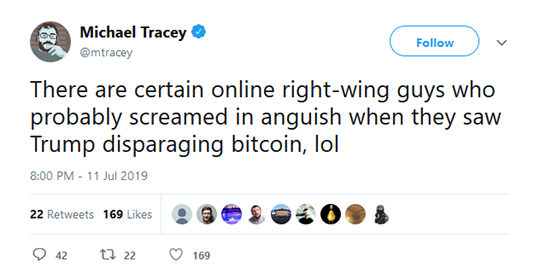 Heh… Yeah, the cognitive dissonance among some of the Trump bros must be epic. Well, unless they think it’s part of some 17-dimensional chess move to support crypto in the end. “Trust the plan,” right?

Then again — and you probably won’t read this anywhere else — the tweet came only hours after the most influential think tank in this administration slammed crypto as a tool of Washington’s “adversaries.”

A report from the Foundation for Defense of Democracies called out Russia, China, Iran and Venezuela for pursuing blockchain technology to end-run U.S. economic sanctions and ultimately the U.S. dollar.

“Blockchain technology may be the innovation that enables U.S. adversaries for the first time to operate entire economies outside the U.S.-led financial system,” says the report. “These governments, therefore, are prioritizing blockchain technology as a key component of their efforts to counter U.S. financial power…

“The efforts of these four nations go beyond mere sanctions evasion… Instead, these nations seek to reduce the potency of unilateral and multilateral sanctions by developing alternative payment systems for global commerce.”

The FDD holds enormous sway among Trump’s hawkish advisers, especially Secretary of State Mike Pompeo and National Security Adviser John Bolton. Hard not to believe one of them had the president’s ear with this report yesterday…

But as noted above, bitcoin traders are unfazed.

“Bitcoin was already retreating from its highs before Trump’s Twitter rant,” says the aforementioned Greg Guenthner. “The flagship cryptocurrency bounced off its late-night lows near $11,000 and continues to climb this morning.” At last check, it’s a smidge above $11,600.

“While bitcoin has experienced increased volatility since tagging $14,000 last month, it has been much more resistant to negative news than it was before its April breakout. In fact, a breakout move this weekend on the heels of the president’s controversial remarks wouldn’t surprise me at all.”

To the mailbag: “I have been working in the Third World for five years now (Laos, Tanzania, Honduras). The USA is heading in such a scary direction it’s well on its way to becoming a ‘managed democracy.’

“Trump is a person of deplorable character; as a result, it’s impacting everything in the USA. There is a lack of ethics, accountability and ownership for what’s right. I don’t trust anything. This will ultimately affect the economy. Who knows — we may resort to a barter system.

“CNN is the best news source, and in late-night television, Stephen Colbert does a bang-up job as he summarizes the essence and the facts in five minutes.

“I take out books from the library from authors who are Yale professors, etc., who discuss the state of America on the world. That’s where I really find out what is going on.

“When the dust settles, I will invest in certified B Corp. companies and real estate. I don’t trust the products and services that Agora is attempting to sell me, either. There you have it.”

The 5: Wait, you’re preparing for the possibility of a barter economy but you’re counting on CNN and Colbert for your primary information intake? That’s a new one on us…

“Soooo, the self-important fellow with the ASE Master Technician certification is not looking too hard for a job,” a reader writes in reply to an entry from our Tuesday mailbag.

“There are lots of jobs for us elderly retired mechanics out there. The auto parts stores are just begging for individuals like him to work the counter.

“I retired last year after working 50 years in the automotive business as a mechanic. I couldn’t handle the boredom so I went to the local NAPA and Advance stores and they couldn’t have been happier to have me. Best part is I really like working there. Some of the local repair shops have discovered that I work there and ask for me when they call in for parts, knowing that most likely I know what they want.

“It isn’t always about the money but the satisfaction that you are doing a job or service for people that they appreciate. I watched a lot of money-hungry shops come and go in my time in the business. My shop was sold to one of my mechanics and is still doing well.

“Did I mention that I was the third generation in this shop and the mechanic that I sold to is my son-in-law, so he is the fourth? The odds of this working were only 5% for me and hopefully my grandson takes over from him. We are in a rural farming area so the big-city self-driving cars are not likely to catch on here anytime soon.”

The 5: Pretty sure the reader on Tuesday made it clear that for the wages offered, he was happier to volunteer at an animal shelter. Different strokes for different folks.

P.S. As we go to virtual press, Treasury Secretary Steve Mnuchin is warning that Uncle Sam runs the risk of defaulting on the national debt come September — confirming an independent estimate we reported earlier this week.