“It’s about paying taxes — money, your beat,” a reader wrote us in 2014 — urging us to take on a topic that, on the surface, might not seem relevant to our beat. And so we did.

“The lesson,” he said, “is be sure you pay your taxes, or the government, whether local or national, may put you in jail.”

If only jail were the worst of it…

“Eric Garner was murdered for the purposes of revenue enhancement,” wrote J.D. Tuccille at Reason.

For years, Eric Garner had been harassed by the New York Police Department for the heinous crime of selling untaxed cigarettes on the street, individually — “loosies” was the lingo.

Five years ago tomorrow, plainclothes cops were prowling Garner’s Staten Island neighborhood, looking to roust anyone who might be committing minor offenses.

At one point, a fight broke out. The cops stood by… but Garner broke it up. Having been made to look bad, the cops confronted Garner — figuring maybe they’d find loosies on him again.

Garner protested: “Every time you see me, you want to mess with me! I’m tired of it! It stops today!”

That was the extent of his resistance. Garner was unarmed. He made no threat. But for that statement of self-assertion, five officers swarmed him. One applied an illegal chokehold. After protesting, “I can’t breathe,” Garner went into cardiac arrest and died at age 43.

New York City has the highest cigarette taxes in the country — $5.85 a pack.

As of 2013, the year before Garner’s killing, researchers estimated 60% of the smokes consumed in New York were smuggled in from other states or were otherwise illegal. Nowhere else came close.

“Another way to think of it,” wrote Walter Olson at the Overlawyered blog, “is that New York has moved closer to prohibition than to a legal market in tobacco.”

Remarkably, in the five years since Garner’s death, the cigarette tax has not gone up. But access to legal high-tax smokes has become even more limited. Since January, tobacco sales at pharmacies have been banned — fueling the black-market trade even more. Big Government in action.

Garner’s death five years ago tomorrow did not make national headlines — despite video shot by a bystander that showed the whole thing. 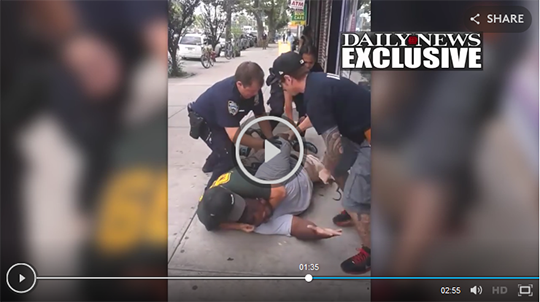 What did make national headlines was the decision by a local grand jury in December 2014 to bring no charges against the officer who put Garner in the chokehold — a chokehold police were forbidden from using, by the way. Protests followed immediately.

Mr. Garner was carrying on a long and storied American tradition. Indeed, you might say we are a nation founded by smugglers.

In 1768, British revenue agents in Boston impounded the cargo ship Liberty, laden with untaxed goods. Its owner, a fellow you might have heard of named John Hancock, was notorious for his resistance to the colonial taxing authorities.

The locals rose up in support of Hancock. The British reacted by sending in troops to occupy Boston — one more instance in the “long train of abuses and usurpations” leading up to the Declaration of Independence in 1776.

“Smuggling used to be an honorable American profession,” wrote Sheldon Richman at the Future of Freedom Foundation.

“In Colonial times and into the early national period, the entrepreneurial smuggler who served consumers by defying the customs agents was celebrated. It was the government agent who risked being tarred and feathered, then rode out of town on a rail.

“Had Eric Garner been set upon by redcoats on Colonial New England streets, many people might have come to his defense. Today, the best we can hope for is that someone will video the confrontation with a cellphone.”

That really is the best we can hope for… because the video does nothing to bring about justice.

Not only were no charges brought against the officer who applied the chokehold, but he’s still on the force. The process of internal discipline has been glacial, hearings getting underway only a few months ago.

This morning brought word the Justice Department is opting not to file federal civil rights charges. The decision comes one day before the federal statute of limitations expires.

Yes, Garner’s family collected a $5.9 million out-of-court settlement. As always, that money was taken from other hardworking New York taxpayers — not the officer’s savings or pension.

Oh, and the guy who shot the video? The cops targeted him, too — ginning up gun charges against him in 2015. He copped a plea and has five months remaining on a four-year sentence.

Five years ago, a wise writer addressed Garner’s death with a prophecy that on this day, in light of current headlines, is positively chilling.

His name was William Norman Grigg. A brilliant stylist with a stupendous command of vocabulary, he died suddenly two years ago at age 54. A posthumous collection of his essays called No Quarter has just been published, with all proceeds going to his widow and six kids.

“Eric Garner’s exasperated proclamation ‘It stops today!’ is cognate with ‘Don’t tread on me,’ and his murder by an army of occupation immeasurably more vicious and corrupt than the redcoats could precipitate a long-overdue rebellion against the omnivorous elite that army serves.

“This is why no effort will be spared to redirect outrage over this atrocity into racial collectivist channels, where it will serve the interest of people who encourage ordinary Americans to look with suspicion and hostility at each other, rather than directing such attention at those who presume to rule the rest of us.”

So much for record highs: The major U.S. stock indexes are in retreat after the president said there’s a “long way to go” on U.S.-China trade talks.

That’s not news if you’ve been reading this e-letter throughout the spring and summer, but it’s news to the youngsters manning Wall Street’s trade desks while their bosses are out in the Hamptons.

At last check the Dow, S&P 500 and Nasdaq are all in the red — the Nasdaq the most at about half a percent.

The day’s big economic numbers are surprising to the upside.

Retail sales for June jumped 0.4% — way more than the 0.1% the “expert consensus” was expecting.

And if you back out auto sales (which are volatile month to month) and gasoline sales (fluctuating gas prices can skew the overall number)… the jump works out to 0.7%, also much better than expected.

Meanwhile, industrial production was flat in June… but that was mostly because of slowing utility output, which always varies with the weather. The big takeaway was the manufacturing component of the number, which jumped 0.4%. That’s the best showing all year.

None of these numbers are consistent with the Federal Reserve cutting the fed funds rate at its next meeting in two weeks. But futures trade this morning still points to a 100% probability of a cut and a nearly 30% probability the cut will be a fat half percentage point.

Now for a twist on “if the product is free, then you’re not the customer — you’re the product.”

As you’ve likely heard, it’s Prime Day at Amazon. Actually, it started yesterday — the discounts are now a two-day affair.

And customers are getting propositioned: Earn a $10 credit if you let Amazon track your web surfing.

“The deal is for new installations of the Amazon Assistant, a comparison-shopping tool that customers can add to their web browsers,” says the Reuters newswire. “It fetches Amazon’s price for products that users see on Walmart.com, Target.com and elsewhere.

“The catch, as Amazon explains in the fine print, is the company can use this data [about the websites you visit] to improve its general marketing, products and services, unrelated to the shopping assistant.”

We’d call this a Faustian bargain… but at only $10, that’s an insult to Faust…

“Just for kicks and giggles I would like to throw in my 2 cents’ worth on crypto and blockchain,” a reader writes.

“Blockchain in and of itself will no doubt change how business is done. But distributed ledger transactions can be done internally to a large extent (think contracts, billing, etc.). The guys managing these functions will have a future from an infrastructure perspective.

“The cryptocurrencies, though, are something different. I hate to disagree with James Altucher, but I don’t see bitcoin or ethereum or any other crypto changing much in the world other than being a pure speculative play.

“Nothing against speculation, mind you, but there is a major difference between investing and speculation, and to lose sight of that is to guarantee oneself pain down the road. As a payment system of itself, it may well function (i.e., the rumors of a gold-backed crypto supported for trade) but as the whiners — er, um, commentators — in government are asserting, it would be a direct affront to dollar hegemony.

“Have we forgotten what has happened to every country that has tried to get away from a dollar-centric model? Such as Iraq? Libya? Like it or not the petrodollar is here to stay. And people may want to hope that it does, because it is going to a very, very bad day when the wheels come off this bus.

“Point being that any real competitor to the dollar will at first be ridiculed, then demonized and then simply regulated out of existence or outlawed or simply absorbed. FedCoin, anyone? Sure, crypto will be used. As a digital dollar. Nothing else will be allowed. This is why the challenging of libra by Congress is no real surprise even though it will (allegedly) be based on a basket of currencies.

“The central banks will never relinquish control over currency. They can’t. And despite having more money than God, the one force that can squash Facebook et al is the international banking cartel. They will not just roll over and let the Zuck run amok in their sandbox.”

The 5: Wouldn’t surprise us if Zuck and the feds will come to some sort of accommodation. But yeah, the feds will ultimately call the shots.

That much was clear from a press conference held yesterday by Treasury Secretary Steve Mnuchin: “We will not allow digital asset service providers to operate in the shadows.”

Not only is Congress holding hearings today, but Mnuchin will discuss the matter today and tomorrow with the other G7 finance ministers in Paris. To be continued…

P.S. For only a few more hours, you can gain access to one of the most powerful trading platforms ever — one that could show you how to collect gains the size of the average annual salary.

Check it out right here: This page will be open through midnight tonight.