An article last week at Canada’s CBC website — with the headline “Illegal Cannabis Getting Even Cheaper, as Legal Gets Costlier…” — has elicited a whopping 2,280 comments from readers.

Here’s a sample of what Canadians are saying:

What is clear is the margin between the price of government-sanctioned marijuana and the black market variety has only widened since legalization in October 2018. 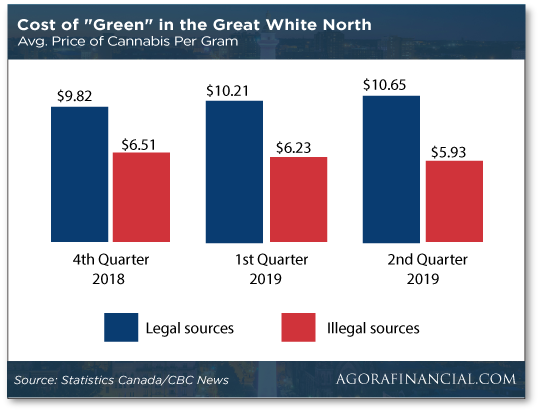 According to the wonks at Statistics Canada — who gathered 423,000 prices of illicit marijuana sold online over a three-month period — the average gap between legal and illegal cannabis in the first full quarter was $3.62 a gram.

“So it is not surprising that more than half — 59% — of [survey] respondents said they purchased illegal cannabis during the period,” CBC reports.

Turning stateside: “A bill containing a historic amendment to protect cannabis programs in all states, U.S. territories and Washington, D.C., was given final approval in the [House] chamber…” says Marijuana Moment.

The original bill only applied to legal marijuana states and to medical cannabis — that’s it. Not only that, but Washington, D.C., would’ve been left out in the cold, restricted from using its own tax dollars to organize the sale of legal weed within city limits.

The new bill — passed in the House of Representatives, 267-165 — pertains to all states, U.S. territories and D.C.

“Notably, its attachment to the bill was accepted largely without a fight, signaling that opposition to cannabis reform is waning in Congress.”

Progress in the House of Representatives is a robust signal that politicos are favoring marijuana reform.

From a legislative outlook on marijuana to an industrywide perspective, we turn to our pot stock specialist Ray Blanco, who says: “Merger-and-acquisition action in the cannabis sector is at an all-time high.” 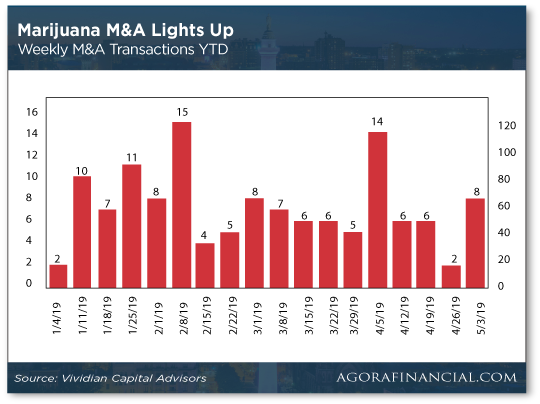 “But not all M&As are created equal,” says Ray. “The most important deals are vertical acquisitions.”

Ray favors buyouts that involve a smart company purchasing a company doing something altogether different in the cannabis supply chain process. “This would be like a cannabis flower producer acquiring a company that manages storefronts and branding.

“And CEOs across the cannabis landscape are realizing that diverse revenue streams fueled by… multiple positions in the cannabis supply chains are crucial to surviving as the market slowly matures and consolidates.”

So as pot M&A heats up, Ray zooms in on one momentous buyout, news of which broke during premarket trading Wednesday…

In “a deal valued at $875 million, Curaleaf will acquire the largest vertically integrated, privately owned multistate cannabis firm in the U.S., Grassroots Cannabis.”

According to Curaleaf’s press release…

“This transaction solidifies Curaleaf’s position as the world’s largest cannabis company by revenue and the largest in the U.S. across key operating metrics.”

Ray says: “This grows Curaleaf’s footprint, bumping their presence up from 12 to 19 states as they manage a portfolio of 131 dispensary licenses, 68 operational locations, 20 cultivation sites and 26 processing facilities.”

The upshot? As of today, Curaleaf’s (OTCBB: CURLF) stock has bounced 20%.

“I’d expect to see almost twice the volume of movement into CURLF… as I’m seeing,” says Ray, “suggesting many folks are not yet privy to this groundbreaking news.

“I think this is one of those rare moments,” he continues, “when [20%] gains are just the beginning for the U.S.’ new largest publicly traded cannabis company.”

If this story intrigues you… move fast!

“The House passed a bill Thursday to hike the federal minimum wage to $15 per hour in a win for liberal activists who have long pushed to give low-wage workers a raise,” CNBC reports.

The 5’s been quick to point out the fallacy of increasing the minimum wage… Like the time we told the story of a Subway franchise owner in Seattle who revolted against those “$5 footlongs”: 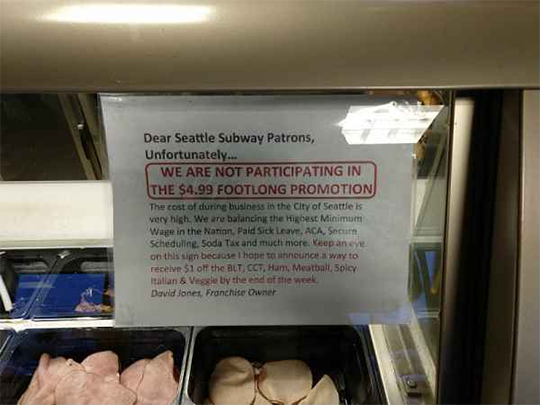 If you’ve got that Subway jingle stuck in your head now… you’re welcome.

The reason the owner couldn’t participate in the sandwich promotion?

And check this out: Per a study at the University of Washington, since 2016 the number of hours worked in low-wage jobs decreased by 9% while hourly wages only increased 3%. The net outcome?

[Side note: And it doesn’t take a university researcher to see right through the consequences of a higher minimum wage.

I told my teenage daughter about the passage of the House bill; she happens to be working (hard) at a summer job in Maryland, where minimum wage is $10.10 per hour.

I thought she’d be ecstatic; instead, she said: “That’s fine for big corporations but that’s really hard on small businesses. They’ll, like, have to resort to paying employees under the table. Or not having employees at all.”

Cooler heads have prevailed: “The bill has little chance of becoming law before next November’s election,” CNBC says.

“Senate Majority Leader Mitch McConnell has no plans to bring the legislation up in his chamber.”

McConnell says it would “depress the economy at a time of economic boom,” adding, “we’re not going to be doing that in the Senate.”

To the markets… where things are sorta ho-hum on this hazy Friday afternoon (at least on the East Coast).

Greg notes: “As the major averages darted to new all-time highs, the transports lagged woefully behind.” The DJIA has floated over 2% higher since April’s historic highs but the Dow Jones Transportation Average is driving into negative territory.

“Earnings and revenue were down pretty much across the board for the railroad,” he continues. “Everything from the loss of Philadelphia Energy Solutions as a customer to the trade war could be to blame for CSX failing to meet expectations.”

And CSX CEO James Foote is keeping it real; he says: “The present economic backdrop is one of the most puzzling I have experienced in my career.”

Not inspiring words for shareholders, that’s for sure.

“Richard Hayes left a $45 million coin on the streets of Manhattan all day Tuesday,” says MarketWatch, “but he wasn’t particularly worried about a thief carting it off.”

The massive coin bears the image of Queen Elizabeth on one side and a midjump kangaroo on the other; it’s 32 inches in diameter by 5 inches thick. 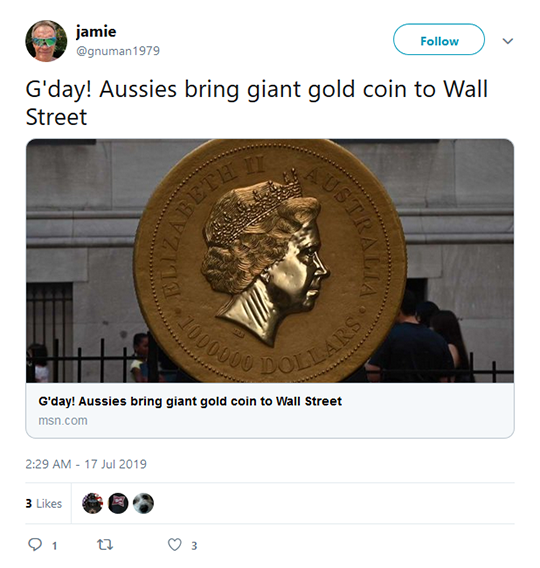 Nuts! We wanted to see the kangaroo…

Richard Hayes is the CEO of the Perth Mint — among the world’s biggest gold refiners — and he’s currently on a publicity tour for the Perth Mint Physical Gold ETF (AAAU).

MarketWatch notes: “He flew to the U.S. from Australia with the world’s largest gold coin in tow.”

No word on whether Hayes checked the coin or tried to force it into an overhead bin… heh.

“The paradigm shift into gold is real,” says a longtime friend of The 5. “Yep! When Ray Dalio is saying it, it’s a big deal.

“When Jim Freakin’ Rickards says it — as he has been doing for some it’s an even bigger deal. That man sees around corners.

“Perhaps even more compelling: Central banksters are saying it as well as acting on it in a big way. In my opinion, that probably means we’re there!

“But paradigms die hard. They’re a bitch. People and their narratives both become irrational and snarky as the process occurs. Still, it seems the return to physical metal has arrived.

The 5: Word. Not only that, but gold mining stocks? Not too shabby. The VanEck Vectors Gold Miners ETF (GDX) is up 33% year to date.

“Your reporting on Ray Dalio is not totally correct,” says another reader.

“I have followed him for a long time and he has liked some gold for years. It’s just that he thinks now is the time to increase your gold holdings.

“You are trying to say he’s just woken up and you were way in front of him.

“That is totally incorrect.”

The 5: We didn’t mean to give the impression we’d gotten the inside scoop on Dalio’s “wokeness” to gold.

But — for the guy who says he bought his first stock at the age of 12 — Dalio’s not exactly known for precious metals.

P.S. Ray Blanco’s taking a small group of readers behind the scenes of the pot industry…

To show them how to retire rich with as little as $100 before the end of the year.

You’d be a great fit!