Canada’s marijuana sensation Canopy Growth appeared to be firing on all cylinders… but by July 3, its co-CEO Bruce Linton had worked himself out of a job.

And what work Linton did during his six-year tenure:

But the Constellation deal might have been Linton’s undoing…

“I think stepping down might not be the right phrase,” Linton told CNBC after his ouster was — diplomatically — announced in a press release. “I was terminated.”

Linton went on to say he had a sneaking suspicion he was about to get the boot when the Constellation-stacked board of directors called a meeting without him… even though Linton was the board’s chairman.

(Heh… another opportunity to use the George Carlin gem: “It’s a big club and you ain’t in it!”)

Sure, Linton admits he might not play well with others, but the real reason for his firing had more to do with Canopy’s latest earnings report that showed a 20 cent loss per share, or $39 million — losses that affected Constellation’s bottom line, too.

After his firing, Linton told CNBC: “I think probably what they’re doing will probably be a better decision, it’s just not a great day for Bruce.” Sigh… 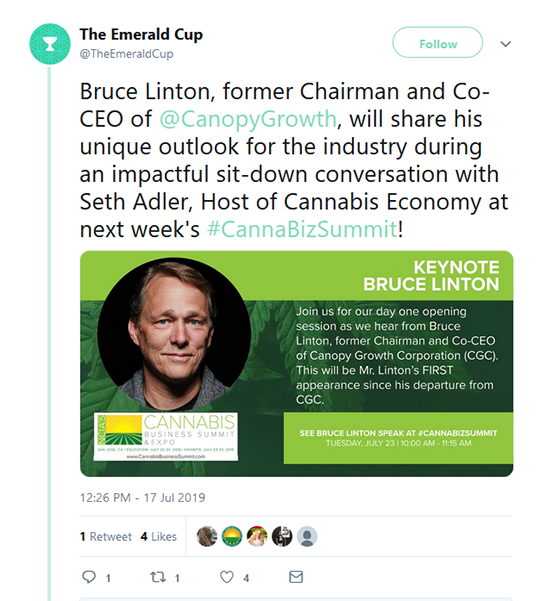 Don’t worry about ol’ Bruce… we’re sure he got a nice “green” parachute.

From Canopy’s palace intrigue to shady double-dealings from CannTrust (ironic, no?)…

Former employee Nick Lalonde blew the whistle on CannTrust when he emailed Health Canada, alleging the medical marijuana company had five unlicensed grow rooms with thousands of cannabis plants that were hidden from inspectors by false walls.

“Three weeks later, CannTrust announced that Health Canada had put a freeze on 5,200 kilograms of cannabis grown in five unlicensed rooms between October and March and admitted it had provided inaccurate information to regulators.”

“The Special Committee takes these issues very seriously and is committed to working with Health Canada to bring the company into compliance,” CannTrust quotes one of the committee members. (You know the drill.)

Our pot stock authority Ray Blanco fills us in on the details of an important bill reintroduced in Congress that might actually change the federal Controlled Substances Act.

By “bipartisan,” Ray means three Republicans and three Democrats are sponsoring the bill, which would open the way for researchers to investigate cannabis grown at sites other than the federally approved one.

“Right now a single facility at the University of Mississippi is the sole legal source of cannabis for legal research.

“That’s problematic because while Ole Miss has been increasing their output, they can’t keep up with demand (only 20 researchers got cannabis from the facility last year), and the 27 cannabis strains grown there are limited compared with what’s commercially available in states where weed is legal in some way.”

Which might account for there being only one cannabis-based medication currently FDA approved and on the market.

“I’ve said before that one of the biggest opportunities in the U.S. cannabis market is pharmaceuticals,” Ray says.

And Ray expects the cannabis industry to get a lift from the DOJ’s ongoing — and sad — investigation into the U.S. opioid epidemic.

According to data just released by the DEA, 76 billion oxycodone and hydrocodone pills were sold in the U.S. between 2006 and 2012. “In that time frame,” Ray notes, “enough opiates were produced to supply every American with 36 pills per year.

“Hundreds of thousands of people died of opioid overdoses in that six-year stretch, as opioid abuse… reached epidemic proportions in much of the country.

“Meanwhile, early-stage research shows that cannabis can provide a less-addictive solution to acute and chronic pain management,” says Ray, “and even a tool for addicts to combat cravings and anxiety.

“The potential for many more pot pharma plays and cannabis-derived drugs in the pipeline is undoubtedly a good thing for cannabis investors.”

Ray expects “tiny cannabis companies [to] fill a huge need in the medical community — and generate some explosive gains in the process!”

One that won’t last forever.

That’s why Ray Blanco put together a full guide…

Showing you how you could start in the BOOMING marijuana industry with just $100.

Now, he’d like to offer to send this free guide straight to you today…

Yesterday, Equifax reached a settlement of up to $700 million to resolve lawsuits associated with its 2017 data breach that disclosed the personal information of almost 150 million Americans.

Which — to us — smacks of the “cost of doing business” slap on the wrist big banks received a few years back. In fact, $700 million accounts for just a quarter of Equifax’s typical quarterly sales. *Shrug.*

Kathleen Kraninger, director of the Consumer Financial Protection Bureau, says: “We encourage consumers impacted by the breach to submit their claims in order to receive free credit monitoring or cash reimbursements.”

According to WSJ: “Consumers, by filing claims online or by mail to a settlement administration, could be eligible for up to $20,000 for lost time and money, such as $25 an hour for up to 20 hours spent on protecting personal information or addressing identity theft after the breach.”

We can only guess at the long-term contortionist act it’ll require for consumers to see any actual money.

But hey — and this is rich — under the terms of Equifax’s settlement, “affected consumers would be eligible to receive at least 10 years of free credit-monitoring and at least seven years of free identity-restoration services.

“They will also be able to request up to six free copies of their Equifax credit report during any 12-month period starting Dec. 31.”

This from the company that left consumers vulnerable to hackers? Thanks… but no thanks.

Checking in on one of the market’s fave IPOs of 2019 — Beyond Meat — Agora analyst Greg Guenthner sheds some light on what could have been a real taco debacle.

Just in time for Taco Tuesday, Greg says: “Beyond’s [BYND] last major headline hit in late June when a Taco Bell executive announced the fast-food giant would not join rival Del Taco in offering Beyond Meat products to its customers

“Taco Bell’s snub did little to deter Beyond’s insane march toward infinity,” says Greg. Shares slumped just 2.5% but in the last several weeks have crept back toward all-time highs. 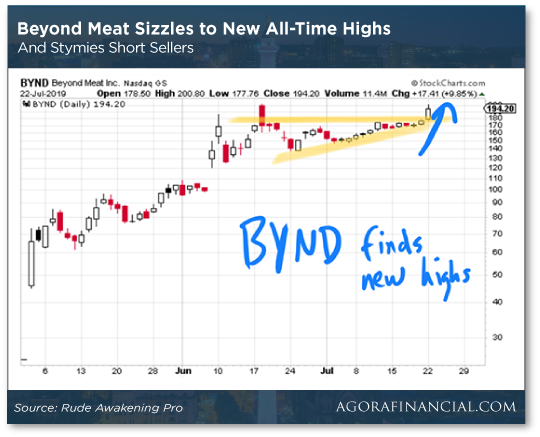 “By the looks of yesterday’s short squeeze, this popular stock could continue its melt-up move into its earnings announcement [next Monday].”

Greg says: “You’d have to be clinically insane to buy this thing into earnings.”

He continues: “Don’t short popular stocks in a hot market — even if they are ridiculously overvalued.”

“Of the companies that reported earnings through last week,” says Alan Knuckman, our eyes and ears at the CBOE, “a full 85% have posted profits that beat expectations.”

Alan believes there are more optimistic reports in store. “In fact,” he says, “I’ve identified three companies that make a habit of proving Wall Street wrong… and could do so again.”

“Earnings season can be one of the most profitable times of the year,” says Alan, “especially when analysts get things wrong.

“Knowing companies that Wall Street gets wrong most often could set you up for big profits,” he concludes.

The Royal Canadian Mounted Police livestreamed a press conference about a double homicide… What could go wrong?

Unfortunately, an uncanny Facebook filter was applied to the officer’s face, making her appear “to be a feline/Homo sapiens hybrid,” says HuffPost. 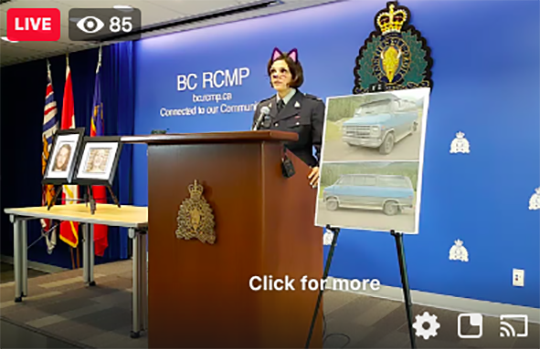 Given the subject of the press conference, the mishap was particularly grievous. The RCMP said via Twitter: “Yes we are aware and addressing it as [the filter’s] an automatic setting. Thank you, we will rectify and issue a video shortly.”

And now we’d like to send it to you for FREE.

Click here for details on how to claim it.