Pension Bailout: The Next Chapter

Recent data from the Pew Charitable Trusts show just how stressed each state retirement pension is. [Spoiler: The Bluegrass state? Bless its heart.]

Working with the most current data available, from 2017, state pension plans are operating at a funding deficit of $1.28 trillion nationwide.

But, hey, look on the bright side — FY16 had a deficit of $1.35 trillion. An improvement, however miniscule, that’s attributed to stronger returns on some more aggressive investment plans.

“The message is still clear: Many states face a pension crisis,” says the Tax Foundation.

The chart below ranks states according to pension funding ratios (assets to liabilities): 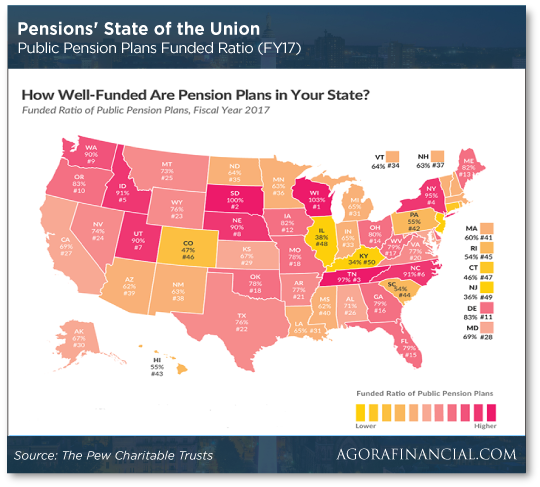 If you’re just taking a quick glance at the chart, we find this shorthand helpful. Pink? Pensions are, well, in the pink. Seeing yellow? These state pensions are downright jaundiced!

Taking a closer look, however, we’ll start with the bad news first: “Kentucky faces the largest deficit, with its plans only 34% funded. New Jersey follows at 36% funded, with Illinois only slightly better at 38%,” the Tax Foundation says.

And desultory results for the bottom three pension offenders come even after each of these states upped pension contributions in 2017; thing is, they couldn’t outrun compounding debts.

Good news? “Pension plans in Wisconsin and South Dakota are in the best shape, with funded ratios of 103% and 100%, respectively. Tennessee is right behind with a 97% ratio.”

Wisconsin’s like that kid in class who already had an A… but still did the extra credit. (Heh… that “kid” might be running Wisconsin’s public pension fund now.)

“Pension plan structures vary from state to state, but historically, most states have provided some form of defined-benefit plan that promises retirees a lifetime annuity,” the Tax Foundation says. Keyword: promises.

“The shift from defined-benefit plans toward more fiscally responsible alternatives can help states better manage future liability, but many states still face years of underfunded obligations that will need to be fulfilled.”

Bottom line: “In the case of dramatically underfunded pension plans, reform now may be less costly and less painful than coping with a larger crisis later,” the Tax Foundation says.

Now for someone not facing a pension crisis, we turn to Vice President Mike Pence. A series of exposés at Forbes kicked off last week; the first asks the question: How did Mike Pence become a millionaire?

(In coming weeks, the Forbes series will look at the financials of other Trump administration VIPs, including Betsy DeVos, Steve Mnuchin and — Dave’s fave — Attorney General William Barr. Should be illuminating.)

According to Forbes: “Mike Pence doesn’t have all that much to his name.”

A local chain that went bankrupt in 2004… scrambling Pence’s $600,000 nest egg with it. (Guess he never heard of diversifying?)

“Luckily, Pence works for the government,” says Forbes. “That means taxpayers are on the hook to fund the 60-year-old vice president’s retirement through his state and federal pensions.” 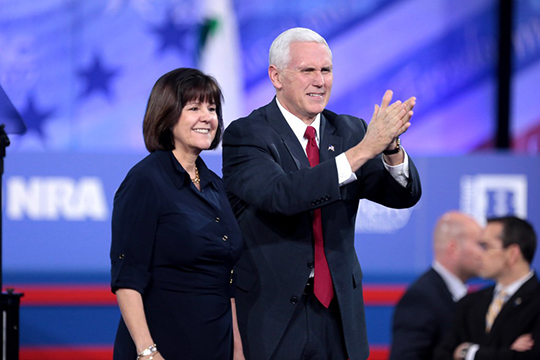 “Those pensions,” Forbes continues, “will likely pay Pence at least $85,000 per year for the rest of his life [and] are worth a combined $1.2 million — enough to push Pence’s net worth to an estimated $1 million after factoring in his six-figure student loan debt.” (For his three kids’ education, by the way.) 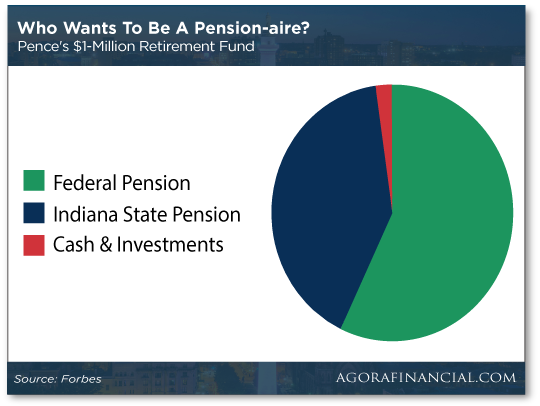 As for Pence’s state pension — according to the map at the top of today’s issue — Indiana’s pension is ranked 33rd, at 65% funded… hmm.

No sweat. Pence will benefit handsomely “from an act of congressional self-dealing.”

Forbes says: “A 1986 federal law based pension payouts for members of Congress and their staffers on a higher percentage of their annual pay than regular federal workers’ pensions.” (Emphasis added.)

“Pence voted in favor of closing this benefit for future congressmen in 2012, though he remains one of many lawmakers grandfathered into the older, more lucrative pensions.”

Mike’s further #blessed; if he leaves office in 2025, he’ll be right around retirement age, ready to start cashing pension checks… endorsed by taxpayers like you.

Seems Musk trumpeting Tesla would be profitable “in Q1 and all quarters going forward” was outlandishly premature. In reality, according to second-quarter earnings, the company reports losses of $1.12 per share — a huge miss. 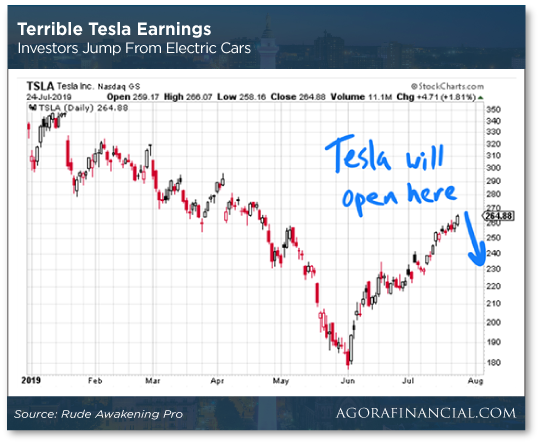 “We’ll have to wait and see if any buyers step in to scoop up Tesla shares following its earnings flop,” Greg says. “But as of right now, it’s safe to say that the stock’s comeback rally is officially in jeopardy.”

Oh, we got a kick out of something said at WSJ about how TSLA is shifting strategy to “emphasize expanding the size of its business over profit.” But hasn’t that always been Tesla’s strategy?

The S&P 500 and Nasdaq are both coming off record closes yesterday; not so much the Dow — Boeing is the highest-weighted Dow stock at 9% — so the reason’s pretty obvious.

“Most Americans are woefully undersaving for retirement,” says Mike Burnick. “Even the smart Americans who are saving know little about the tools they are using… such as their 401(k) plan.

But we’re getting ahead of ourselves…

So for a peek at advice Mike gives friends and family, here are five rules to help save for retirement:

That “effectively [allows] you to stash away a total of 9% of your salary toward your retirement.”

Rule #5: Look but Don’t Touch. Don’t be overly impressed with paper gains; on the other hand, don’t panic when you see losses on paper either. (The fourth quarter of 2018 is a prime example.)

Mike’s last piece of advice: “Max out your 401(k) contributions…

“And don’t forget the importance of making your savings work as hard as you do.” You know Mike favors income-generating dividend stocks with long track records. “They have proven time and time again to beat the pants off the S&P 500 and do so with lower volatility.”

Heh… it’s really too bad the veep didn’t take Mike Burnick’s advice. Pence might not be living off the government’s largess if he had.

“A South Carolina restaurant is taking aim at a Guinness World Record by offering a $310 crab cake that comes encrusted with platinum,” UPI reports. 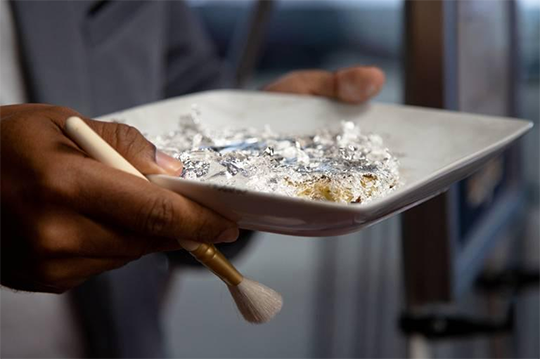 Chef Lazarius Ken Leysath Walker of Columbia restaurant The Twist says: “The thing about it was trial and error. I’ve wasted so much platinum trying to get it right.”

Ooh, boy… there are more angles here than we can shake a crab mallet at!

First, peak boom phase of the boom-bust cycle much?

Second, precious metals circling the drain or winding up in a landfill?

Last — we’re from Bawlmer, hon — the ONLY thing you should put on a crab cake is Old Bay. Period.

P.S. Moments ago, readers profited from a 205% gainer…

All from a single deal.

Until now, you couldn’t even touch this money…

But you can learn how to take back your share TODAY.