It’s a sports tournament you’ve likely never heard of… and the winner collects a prize bigger than the one earned by the champions at Wimbledon earlier this month.

Indeed it is. Since launch two years ago, it’s become the most popular video game in the world. And in recent weeks, 40 million players tried to qualify for this event.

Only 100 made the final cut. They’re gathered this weekend at Flushing Meadows in New York — better known as the home of the U.S. Open tennis tournament. (But for how long?) 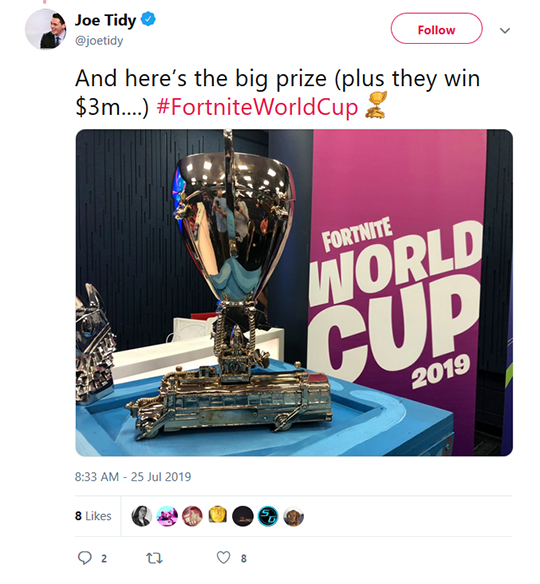 Yep, $3 million for the winner. Even a fourth-place finish earns a seven-figure prize, and every finalist is guaranteed at least $50,000.

“A two-tiered stage has been set up with circles of computers,” reports the BBC, which sent a reporter to follow the British contestants. “Each player will be able to compete on their exact home setup with the same mouse and keyboard or controller they are used to. Giant screens will cut between the action for the audience.”

Maybe you have trouble wrapping your mind around the whole thing. But there’s an investing angle — and a lucrative one at that.

James cites figures that esports were an $850 million industry last year… and will mushroom to $1.5 billion by next year.

“And as esports grow and evolve, so too will businesses to support them.”

Indeed, “a whole new generation of millionaires will be minted from the vast opportunities and growth in the esports industry,” James believes.

It’s still early days for esports, says James — but not for long. Next month brings another massive gaming event in Shanghai called Dota 2… and the total available prize money will likely be more than the $30 million up for grabs this weekend.

Dota 2 starts Aug. 15… and James says he’s spied an $8 stock in the esports sector that could deliver a fortune.

James lays out the opportunity for you at this link — no long video to watch.

The U.S. economy has settled back into “meh” mode, if the government’s GDP numbers are to be believed.

The Commerce Department is out with its first guess at GDP for the second quarter of this year. It works out to annualized growth of 2.1%. In other words, growth on par with the entire lame post-2008 “expansion.”

Meanwhile, figures from previous quarters have been revised down. Turns out growth in 2018 fell shy of Donald Trump’s much-touted 3% target.

We don’t even know why the president bothered setting such a target in the first place. As we’ve said for years, GDP is a statistical abstraction that has nothing to do with whether your standard of living is rising or falling. We mocked low-energy Jeb Bush for a 2015 campaign speech in which he said, “My aspiration for the country — and I believe we can achieve it — is 4% growth as far as the eye can see.” Inspiring!

Back to the current quarter’s figures: It was consumer spending and government spending that did all the heavy lifting.

Business investment, on the other hand, was a drag. Gee, what happened to all the new factories, all the research and development, that was supposed to come about from the big corporate tax cut? Oh, that’s right, the money was channeled into dividends and buybacks. (Mergers and acquisitions too.)

Still, the 2.1% overall figure is juuuust strong enough to more or less kill any notion of a big interest rate cut when the Federal Reserve meets next Wednesday. Futures trade this morning points to only a 19.4% probability the Fed will chop rates a half percentage point. (A quarter percentage point, however, is in the bag.)

Between the GDP numbers and a slew of earnings reports, the major U.S. stock indexes are in the green on this final day of the week.

But Amazon’s profits fell short of expectations — breaking a streak of four quarters in which the company reported record profits. AMZN is down 2.3% at last check.

The bottom line took a hit in part because of the ramp-up to one-day shipping for Prime members. That’s a costly endeavor, but Amazon has long been willing to sacrifice short-term profit to retain long-term dominance over any potential retail rivals. Old news.

More worrisome for Amazon, however, is the slowing growth in AWS, its cloud-computing business — a cash machine that’s helped subsidize AMZN’s relentless drive for growth in online retail. A year ago we pointed out how cloud computing has few barriers to entry; now Microsoft and other rivals are starting to make a dent.

Still, Amazon’s price-earnings ratio looks a lot better now than it did a year ago. Then, it was a nosebleed 232x. Today, it’s practically a value stock at 80x!

Turns out the whole “shrinking tax refunds” thing was bogus. Or should we say, even more bogus than it was to begin with.

During tax season this year, there was much caterwauling about how the IRS was issuing fewer refunds than in previous years… and the amount of those refunds was lower. The “culprit” was the Trump/GOP tax law.

At the risk of belaboring the obvious, we pointed out at the time 1) the size of your refund has nothing to do with your tax liability and 2) a big refund is a sign of poor planning because you’re giving Uncle Sam an interest-free loan.

Now it turns out that not only did most Americans’ tax liabilities go down… refunds weren’t much different than before the law came into effect. 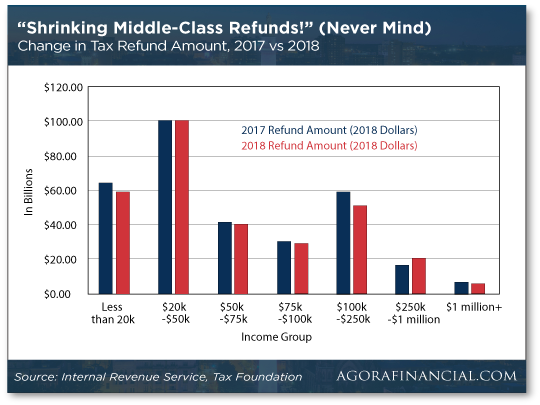 Elsewhere, the Tax Foundation finds the number of people who itemized deductions last year tumbled in every income category: “Overall, the percentage of the population that itemizes decreased from 30% to 10%.”

No surprise given the expanded standard deduction and the new limits on itemizing… but still interesting.

“I disagree with your assessment about AG Bill Barr’s intentions regarding the ‘investigation of the investigators,’” a reader writes after our Wednesday episode of The 5.

“Although it will take some time to gather the appropriate facts Barr will succeed, along with other investigators, in proving that Hillary and her FBI, DOJ co-conspirators et al. conspired internally to concoct false evidence to undermine everything Trump and influence the election in favor of Clinton.

“You will eat your words along with pathetic Democrats, CNN and MSNBC once Barr gets done and the officials involved face their duly justified criminal charges.

“It is hard to count how many Democrats are currently having trouble getting a good night’s sleep while they figure out ways to destroy evidence just like crooked Hillary did with her emails. The pardon Jim Comey bestowed on Clinton will without question be proven to be the scam it was.

“I cannot wait for the destruction of the Democrats once the American public learns the truth.”

The 5: We hope we do eat our words and Barr proves us wrong. But given his history, the burden of proof is on him.

The most likely outcome, we daresay, is a mutual agreement to bury bipartisan scandals.

That’s what happened in the late 1990s, as Greg Palast related in his book The Best Democracy Money Can Buy.

Senior members of Congress cut a sweetheart deal during Clinton’s second term to sweep dueling scandals under the rug: The Republicans ended up going after Clinton only for the sex stuff — and not for the money illegally funneled to the Clintons by Indonesia’s wealthy Riady family. (Remember that?) In exchange, the Democrats dropped any attempt to look into the Koch brothers, who laundered contributions to GOP candidates in key congressional districts during 1996.

As Palast wrote, “The true, unreported reason for the collapse of the inquiry most threatening to Clinton — the Indonesia money chain, which could have knocked him out of office — reveals the ultimate measure of Koch influence: that Republicans sacrificed their case against the president to keep their secret benefactors under wraps.”

“It’s disturbing to learn about the deep state histories of William Barr and John Durham,” writes one of our regulars.

“Heaven help us if there are no good men left.”

We saved the best for last when it comes to reader reactions, however — in which your editor is labeled a “liberal mouthpiece.”

“I subscribed to receive investment news and market information. Instead, I get a Rachel Madow [sic] impersonator with the moniker of Dave Gonigam.

“I am fed up with people swinging the political cat when they are ‘supposed’ to give me quality content. Looks like I blew good money to read another bloviating jackass’s political views.

The 5: Reminder: The 5 is free, and you get what you pay for. (It’s a bonus added to your paid subscription.)

We brought up the subject because political uncertainty is moving markets in a way that most of us haven’t experienced in decades, if ever. We don’t like it, but sometimes it can’t be avoided.

Still, this has to be a first: I say upfront on Wednesday the “Russian collusion” allegations are bogus — a position I’ve taken from the beginning in the absence of compelling evidence — and a reader conflates me with one of the most unhinged Russia conspiracy theorists out there!

P.S. Really, I’d be hurt if it weren’t for the willful lack of reading comprehension — which I chalk up in part to a phenomenon we addressed here on Monday.