You and Me, We’re Just Their Guinea Pigs

“Don’t ever think for a minute that the central bankers know what they’re doing,” Jim Rickards told me one spring day in 2014. “They don’t.”

As you might be aware, the “biggest Federal Reserve meeting in years” will wrap up around the time we hit “Send” on this episode of The 5.

The Fed’s Open Market Committee will cut its benchmark fed funds rate for the first time since the Panic of 2008. A quarter-percentage point cut is in the bag; a half-percentage point would be a shock, but not a total surprise.

Whatever the outcome, we’ll follow up tomorrow. Today we seek to put events in the context of the last decade-plus.

The Fed — and the globe’s other major central banks — have engaged in one unprecedented experiment after another since 2008, using each of us as monetary guinea pigs.

Back to the conversation I had with Jim five years ago, about central bankers having no clue what they’re doing: “That’s my own view,” he said, “but I’ve heard that recently from a couple central bankers. I recently spent some time with one member of the Federal Open Market Committee and another member of the Monetary Policy Committee of the Bank of England, which is the equivalent of their FOMC — both policymakers, both central bankers.

“And they said the same thing: ‘We don’t know what we’re doing. This is a massive experiment. We’ve never done this before. We try something. If it works, maybe we do a little more; if it doesn’t work, we pull it away and we’ll try something else.'”

That’s the theory, such as it is. Here’s the practice, as Jim described it to his Strategic Intelligence readers this week.

“The Federal Reserve took interest rates to zero in 2008 and held them there for seven years before raising them slightly in recent years.

“The Fed also expanded its balance sheet through money printing from $‌800 billion to $‌4.5 trillion from 2008–2014. That balance sheet has only been reduced slightly.”

Zero interest rates were a crazy-enough experiment. But get a load of the Fed’s balance sheet on a chart. We’ll take it all the way back to 2003 for some pre-2008 perspective. The shaded bar indicates the “Great Recession.” 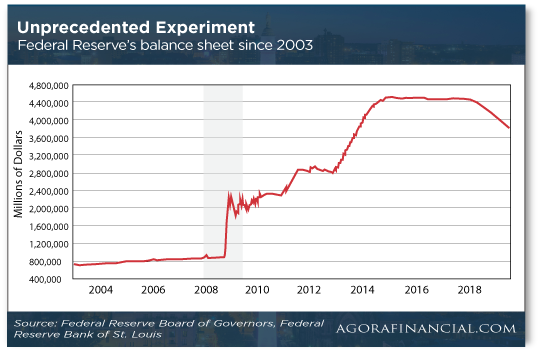 OK, Jim, please continue: “Other central banks including the European Central Bank and the Bank of Japan used negative rates and expanded their balance sheets even more than the Fed.

“Those negative rates and bloated balance sheets are still in place. These extreme forms of monetary easing were supposed to provide ‘stimulus’ to return the economy to self-sustaining trend growth.”

More than a decade on, the experiments are demonstrably a bust.

“The economy grew,” says Jim, “but at the slowest pace of any recovery in history. Europe and Japan have suffered repeated recessions and periodic deflation while the U.S. has suffered below-trend growth and disinflation.

“We are now left to live with the consequences, including uncertainty and slow growth,” Jim goes on.

“Worse yet, the central banks will be unprepared to deal with the next crisis since they never cleaned up their mess from the last one.”

Indeed. Let’s return to a chart we shared on Monday showing the fed funds rate over a decades-long sweep of history, going back to when the Fed began setting a target for that rate… 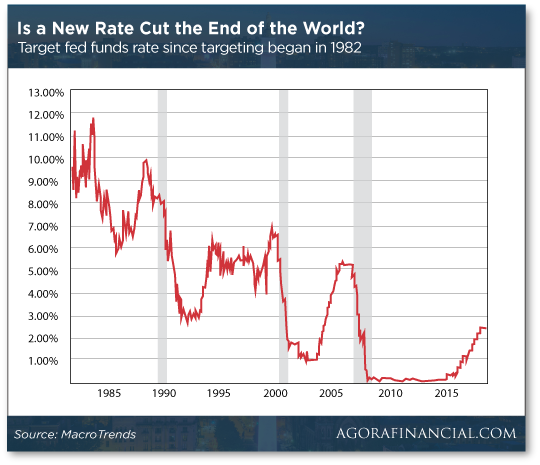 For years after 2008, the Fed was desperate to “normalize” the fed funds rate — primarily so it could cut rates again to combat any new recession that might develop. The hope was that a rate of 4% or thereabouts would load enough “bullets in the chamber,” as it were.

But it never worked out…

So here we are with a fed funds rate the last seven months at 2.5%, nowhere near the 4% needed to fight off a new recession. The chamber isn’t fully loaded. And now the Fed is firing off a round this afternoon.

What changed, you ask?

The Fed is caught in a Kafkaesque trap of its own making: The pooh-bahs realize that the mere act of continuing to raise rates might trigger the recession the higher interest rates are intended to combat. (How meta, huh?)

Wall Street wants more of the easy money that fueled the bull market from 2009–2015. The president wants more easy money to ensure the “big, fat ugly bubble” that he decried in 2016 will remain inflated long enough to ensure his reelection in 2020.

As we’ve said for a long time, there’ve been a dozen or so Fed rate-raising cycles since the end of World War II… and all but one of them have ended with the Fed crashing the economy into a recession. The only “soft landing” the Fed pulled off was in 1994.

We’re about to find out whether the Fed can defy its own history for only the second time. More tomorrow…

No surprise, the markets are treading water in advance of the Fed’s decision. The major U.S. stock indexes have barely budged from yesterday’s closes. Ditto for gold at $1,420.

The standout earnings report is from Apple. AAPL, it seems, is doing just fine in a world of “peak iPhone.”

Sales of the company’s landmark product are still moribund. But sales in every other part of the business grew, including the all-important “services” like subscriptions to Apple Music that generate a steady monthly cash flow.

With that, AAPL shares are up 4% on the day and its market cap is back above $1 trillion.

At 18.3, AAPL’s earnings multiple is still far below those of the other so-called FAANG stocks. It’s almost reasonable!

Our income maven Zach Scheidt says AAPL shouldn’t even be lumped in with the rest of that group; its go-go growth days are receding in the rearview and the company is a mature, dividend-paying blue chip stalwart — akin to General Motors or IBM in the good old days. It’s been a favorite of his for years now.

Gee, this economic-policeman-of-the-planet stuff is complicated.

It was more than a year ago Donald Trump withdrew Washington from the Iran nuclear deal and imposed economic sanctions the rest of the world had to abide by if they expected to transact in U.S. dollars. France’s Finance Minister Bruno Le Maire complained that “The international reach of U.S. sanctions makes the U.S. the economic policeman of the planet.”

But now Politico reports the State Department “is expected to reissue waivers this week allowing continued international work on nuclear projects inside Iran, according to two sources familiar with the deliberations.”

That doesn’t sound very consistent with Trump’s “maximum pressure” campaign, does it?

The problem is that without those waivers, Washington would soon have to start imposing huge sanctions on all the other countries that are party to the Iran nuclear deal — France, Germany, Britain, China and Russia.

Treasury Secretary Steve Mnuchin had a problem with that, even if Secretary of State Mike Pompeo and National Security Adviser John Bolton did not. Mnuchin’s arguments won the day with the president.

Not that that’ll be the last word for all time, of course.

Go figure: A bureaucrat is suspended from her job for trying to, you know, be helpful instead of making life as difficult as possible.

Kim Ehl worked for the Michigan Department of Health and Human Services as a general office assistant in Flint. “In April 2018,” reports The Associated Press, “she rented a billboard to display a customer service number because she was frustrated over office policy, which required that people leave messages with five levels of management before staff could provide the help line information.” [Emphasis ours.]

For her initiative — and yes, she “went through channels” before taking this step — the department rewarded her with a three-day suspension.

Ehl finally quit in disgust earlier this month. “Flint deserves better,” she says. “Despite being screwed over… our clients were always kind and gracious toward me.”

After a spate of “Get in line behind our president!” emails from readers in recent days, we heard from one of our longtimers…

[You really are a longtimer if you remember that ongoing gag. Go on…]

“I personally have equal contempt for President Trump, Pelosi, Schumer, McConnell, et al. They are all swamp dwellers. I do find Trump entertaining, however. He is very smart when it comes to keeping himself in the headlines. He has created a phenomenon where all you have to do to get a debate/shouting match/discussion started is just mention his name. It like a match to gas.

“A few of my problems with him are:

“Some of his promises he is fulfilling:

“Albert Einstein had a very thought-provoking quote: ‘Unthinking respect for authority is the greatest enemy of truth.’

“It would be nice to be able to have a civil discussion instead of a shouting match!

The 5: Thanks. It’s hard not to consider the rancor in the context of the “new American civil war” thesis that we kicked around early this year.

And yet the shouting seems so insubstantial. People aren’t arguing over momentous matters like slavery or independence from Great Britain. (The historian Michael Vlahos rightly points out the Revolution was a civil war.) They’re arguing over whether something Donald Trump tweeted was mean-spirited or not.

Of course, that can change… which brings us back to where we began today. A recession might well crystallize the rancor and bring a substantial issue to the surface that would define the conflict for the ages.

What might that issue be? Hard to say as we’re crashing deadline today. But it’s in the back of our minds constantly…

P.S. Historical curiosity: The National Bureau of Economic Research — the outfit of eggheads that sets America’s “official” recession dates — keeps records going back to the 1850s.

By the NBER’s reckoning, the economy entered a recession in June 1857 and began recovering in December 1858. John Brown’s raid on Harpers Ferry came in October 1859… the Democratic Party split apart during several conventions in the spring of 1860… the economy went back into recession just before the election of November 1860… and Fort Sumter occurred in April 1861.

Just keeping tabs is all…