The Chinese devaluation comes as a shock. But it shouldn’t come as a surprise.

After the president promised to lay a 10% tariff on another $300 billion of imports from China, Beijing promised “necessary countermeasures to resolutely defend its core interests.”

The financial media took that to mean more tariffs on imports from the United States. Just one problem: China has already imposed tariffs on nearly all its American imports.

As we explained here a year ago… by devaluing the yuan, Beijing can offset the impact of tariffs laid on by Washington.

If the yuan drops 20% against the dollar, that makes imports from the United States 20% more expensive. Just as good as a tariff from Beijing’s standpoint.

And there’s another plus for China: “If the yuan dropped 20% against the dollar,” explained our Jim Rickards, “Chinese export costs would drop by about the same amount because yuan unit labor costs are a huge part of Chinese manufacturing costs.

There’s your essential context for Beijing’s decision to let its currency crack below a crucial level overnight — seven yuan to the dollar. 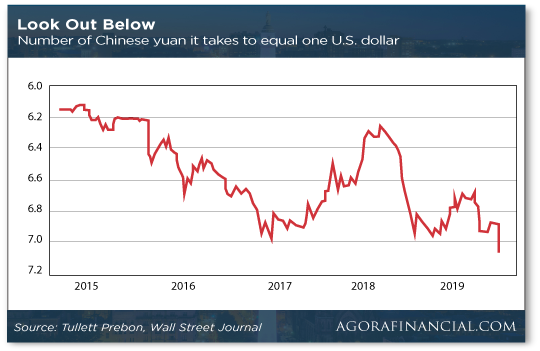 Donald Trump, of course, is beside himself. “It’s called ‘currency manipulation,’” he tweeted.

That’s not an official designation. Twice a year, the Treasury Department decides whether to label one country or another as a currency manipulator. The last time it did so was in 1994 — against China. The next opportunity to make the label official comes toward the end of November.

The problem, as Jim has said time and again, is there are no winners in a currency war. (He literally wrote the book on Currency Wars in 2011.)

“As soon as one country devalues, its trading partners devalue in retaliation and nothing is gained. This tactic does not work because trade partners retaliate by reducing the value of their own currencies.”

Jim says the current global currency war got underway in early 2010 when President Obama laid out a goal of doubling U.S. exports in five years. (We only got halfway to that goal.)

In Jim’s view, currency wars eventually morph into trade wars — with a periodic renewal of currency wars (“competitive devaluations”) along the way.

“Eventually, they may end up in shooting wars,” he warns. World War II arose in part out of a “race to the bottom” among the managers of global currencies starting with a French devaluation in 1925.

“We haven’t reached that point yet,” says Jim. “But the risk is real, and may be growing.”

The Chinese devaluation has set another round of the safety trade into motion:

The lone economic number of the day surprised to the downside big-time. The ISM nonmanufacturing index rang in at 53.7. That number still indicates the U.S. services sector is growing, but the figure is a three-year low — just like the ISM manufacturing index that came out on Friday.

Ghoulish as it surely seems, the gunmaker stocks are bucking the trend of the rest of the stock market today — just like old times.

As we write, American Outdoor Brands (AOBC) — maker of Smith & Wesson — is up 2.2% on the day. Sturm Ruger (RGR) is up more modestly, about a third of a percent.

During the Obama administration, gunmaker stocks would spike every time there was a mass shooting — on the theory that said shooting would bring about new gun control measures and firearms enthusiasts would want to stock up in advance.

Tribal partisan loyalties notwithstanding, the current president’s commitment to the Second Amendment has long been open to question. (“I like taking guns away early,” he said 18 months ago. “Take the guns first, go through due process second.”)

But so far during this administration, gun stocks have not spiked after mass shootings — until now.

Socially and culturally, something seems different this and not in a good way. For instance, there was the unhinged reaction to this tweet by the celebrity astrophysicist Neil deGrasse Tyson. 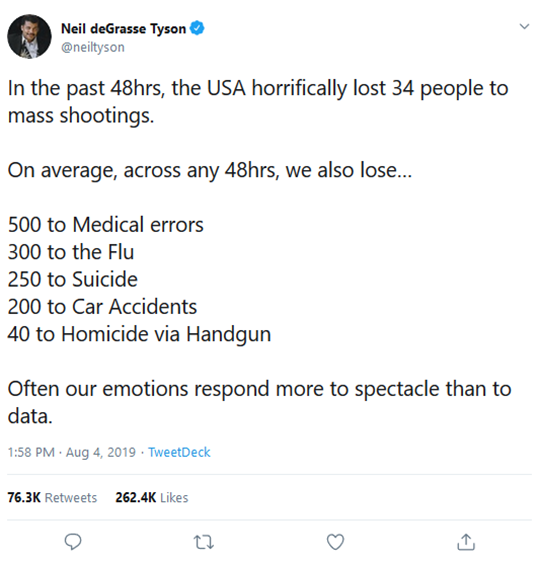 Aside from maybe “Too soon”… there’s absolutely nothing to take issue with here. Any more than pointing out after a “terrorist attack” that you’re more likely to be killed by a falling piece of furniture in your own home.

Speaking of the loaded term “terrorism,” here’s a typical reaction from the Beltway class. This is a Washington Post columnist… 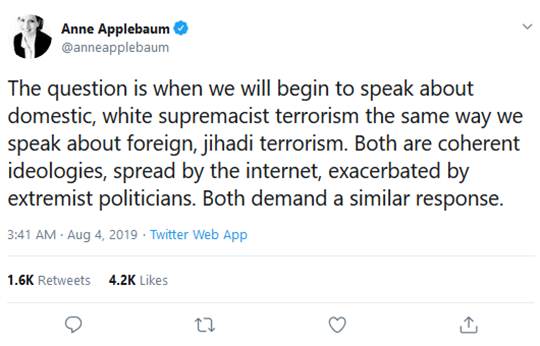 My God, we’re nearly 18 years into a “war on terrorism” that’s a glaring failure at a cost of $5.6 trillion and counting. And now the same tactics are to be applied to “white nationalism.” What could possibly go wrong? We’re sure it’ll turn out just as well as the war on drugs, the war on poverty and so on.

But that’s the “do something” mentality of the Beltway class. Synchronistically, your editor was listening this morning to the first half of Muse’s album Absolution — released during the early years of the “war on terror.” The lyrics to the opening track “Apocalypse Please” capture the mindset perfectly: “Declare this an emergency/Come on and spread a sense of urgency.”

*Sigh* Might be a good time to review our “new American civil war” thesis again. And as we said two years ago after Charlottesville, the only asset classes that will thrive in such a scenario are precious metals, ammo and No. 10 Mountain House cans. (Charlottesville’s two-year anniversary is next Monday. We’re sure that’ll bring out the best in everyone.)

Because the U.S.-centric media won’t tell you, we will: The most likely flashpoint for a nuclear war is heating up again.

India has stripped the state of Jammu and Kashmir of its semiautonomous status — something that’s helped kinda-sorta keep the peace there over the decades.

“Tense” doesn’t even begin to describe the situation. “If people step out of their homes, they see paramilitary forces on every street,” says the BBC’s correspondent — who’s resorting to extraordinary means to get the story out because Delhi has cut internet and mobile phone access.

Reminder: India and Pakistan both have nukes and the fallout from a war could kill 2 billion people. We went a little further into the background six months ago; you can reacquaint yourself here.

For the record, here’s another straw in the “de-dollarization” winds.

The euro is about to overtake the dollar as the top currency for Russia’s exports to the European Union, according to Bloomberg. The Esperanto currency’s share is now 42% — up from 32% a year earlier.

Likewise the euro is about to overtake the dollar in Russia’s trade with China. And euro transactions between Russia and India are surging.

Popular music is so bad these days that it’s leading to an increase in lawsuits.

At least that’s our take on a front-page Wall Street Journal story that informs us music executives are worried about a “growing trend” of “infringement cases that claim some of the industry’s most popular songs are rip-offs.”

Last week, a federal jury in Los Angeles decided the 2013 Katy Perry song “Dark Horse” ripped off a Christian rap song (apparently there is such a thing) called “Joyful Noise.” The $2.8 million award, says the Journal, “has lawyers concerned about similar lawsuits and songwriters worried about stifled creativity.

“I think every music lawyer in the country is screaming right now,” says lawyer Ed McPherson, a specialist in such litigation.

In 2010 the progressive writer Sam Smith — who also played jazz drums around Washington, D.C., for decades — lamented what he called “the decline in music of melody, interesting chords, dynamics and rhythmic variety.”

Yep. Musicians are painting from an ever-more limited palette, so to speak. Listen to a string of “contemporary hits” and you’re struck by the sameness of it all.

Yeah, it’s probably a bunch of boomers who put together the list and they’re caught up in self-absorbed nostalgia.

But there’s a grain of truth there, no? And there’s also the seed of much litigation, apparently…

To the mailbag: “Dave, in regards to the political commentary that you have been receiving, I would like to tell you this.

“I know you like to ignore most of the noise out there that doesn’t amount to a hill of beans. You don’t, however, shut out the really important news that could have an effect on the markets. I happen to think you strike the right balance on informing us without any partisan bias.

[Oh, this is complimentary? Go on, please…]

“I particularly liked learning about Bill Barr’s past record. I didn’t take it as either a liberal or conservative viewpoint. It was just facts that I appreciated reading.

“I have my own views on the president and the Democrat candidates and I am also smart enough to know that 100% of your readers don’t care about my opinions. Likewise, I don’t give a s*** about others’ political opinions.

“There seem to be some babe in the woods types that for the first time have discovered that presidents lie. It’s really somewhat amusing to see them running around with their hair on fire screaming, ‘The president lied, the president lied!’ For those that just can’t help themselves and want to rant and rave there are plenty of social media sites for that kind of BS without you turning The 5 into another sewer.

Our thesis in that surprisingly controversial episode of The 5 is only reinforced by the sudden withdrawal of John Ratcliffe as Trump’s nominee for director of national intelligence.

The thinking in some circles was that Ratcliffe and Barr would make an effective tag team uncovering how the “intelligence community” tried to undermine the Trump campaign. But Ratcliffe suddenly pulled his name from consideration for reasons still unknown. The cover story is “lack of qualifications and experience.” Fine, whatever…

P.S. As we get closer to virtual press time, the Dow’s slide has grown to 700 points. More tomorrow…