Only yesterday we noted how there’s a set schedule for Treasury labeling other governments “currency manipulators”… and the next opportunity wasn’t due till late November.

Hours later, around dinnertime on the East Coast, Treasury junked the calendar and branded China a currency manipulator anyway — a clear riposte to Beijing’s decision to let the yuan’s value fall below the critical level of seven yuan to the dollar.

Then everyone took a breath and realized nothing had really changed.

And the designation usually means the Treasury secretary starts working with the International Monetary Fund to address Washington’s concerns. As if there’s any chance that would move the needle.

In other words, the scarlet “A” of the “currency manipulator” label is all theatrics.

With that realization setting in, there’s a mild risk-on trade this morning.

Emphasis on the word “mild.” As we write the Dow has recovered about 100 of the nearly 800 points lost yesterday. It’s about 5.6% below its record close three weeks ago.

Volatility as measured by the popular VIX gauge is pulling back; yesterday it peaked at 25 and this morning it’s at 22. In the context of the last two years, these last few trading days are a blip compared with the big scares in February and December of 2018. 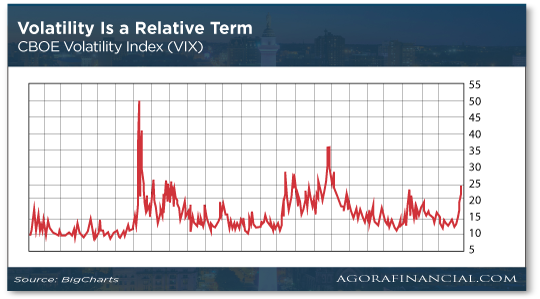 Gold has pulled back from that overnight spike, but it’s still looking strong at $1,469.

That’s not to say we’re out of the woods. Hardly.

For one thing, the president seems confused about the effects of Chinese devaluation. Here’s something he tweeted on Saturday… 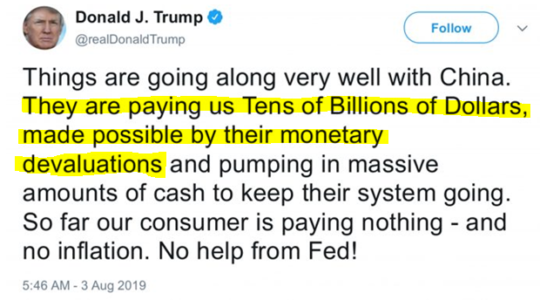 But then, after the additional devaluation on Monday, he tweeted the following… 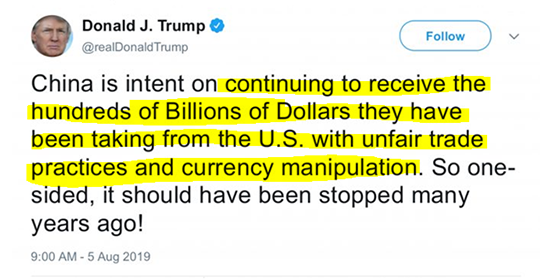 Meanwhile, Beijing is girding itself for a long struggle. The London-based consultancy Capital Economics says Chinese leaders have opted to “weaponize” the exchange rate. “The fact that they have now stopped defending 7.00 against the dollar suggests that they have all but abandoned hopes for a trade deal with the U.S.”

Indeed. They might well be bracing for 30 years of trade war — as we anticipated here nearly a year ago. We’ll revisit that topic tomorrow…

The bond market is certainly sniffing out trouble ahead.

For one thing, the “inverted yield curve” is becoming more inverted. When short-term Treasury rates exceed long-term rates, that often suggests an impending economic slowdown. Yesterday, the yield on a 3-month Treasury bill registered 2.01%… while the yield on a 10-year Treasury note rang in at 1.68%.

That’s the widest margin since April 2007. In that previous instance, the “Great Recession” was underway eight months later.

Meanwhile, the “spread” between U.S. Treasury debt and U.S. junk bonds grew to its widest in more than three years. A typical junk bond — corporate debt that’s below investment-grade — now yields 6.15%, compared with the aforementioned 1.68% on a 10-year T-note.

“The jump reflected concern that trade conditions could tip the global economy into a downturn that would hit the finances of highly indebted companies particularly hard,” says the Financial Times.

With that, futures markets are pricing in a 100% probability of another interest rate cut by the Federal Reserve next month.

That’s up from 98% on Friday — heh. What’s more, there’s a 21% probability the cut will be a half-percentage point and not just a quarter. If the trade war worsens and markets tank further, that probability will only increase.

Now that interest rates are heading back down, what’s an already interest-starved saver to do?

“High-yield savings accounts are popping up across the country with interest rates we haven’t seen in a decade,” says our income specialist Zach Scheidt, ready with a solution.

You just won’t find them at the Big Four banks — Chase, Citi, Bank of America, Wells Fargo. Instead you have to look to smaller online institutions that still have the familiar FDIC protection.

“If you’ve got $1,000 in your savings account, this probably isn’t worth your time,” Zach allows.

For the record: State and local government pension plans fell short of their hoped-for returns in the year ended June 30.

In general, these plans count on an annual return of 7.25% — which might sound ambitious but it’s actually lower than it was a decade ago when we labeled the phenomenon “the 8% illusion.”

But last year, even 7.25% was too much to hope for. Among plans with more than $1 billion in assets, the average return was 6.79% — according to figures just out from Wilshire Trust Universe Comparison Service.

Ugh… These plans are already in rough shape. The Federal Reserve says they have $4.4 trillion in assets — $4.2 trillion less than they need to pay all their promised future benefits.

We guarantee this is going to become a massive problem during the next recession — when you will be expected to shore up these pension plans via new taxes or higher taxes.

Granted, the risk will vary depending on where you live. Emily had a comprehensive treatment of this topic a couple of weeks ago — complete with a state-by-state breakdown.

From Colorado, a story of do-gooders who are out to wreck a small-business owner’s retirement.

For the last two decades, Tom Messina has owned Tom’s Diner in downtown Denver. At age 60, he’s looking to cash out and retire. He got a $4.8 million offer from a developer with plans to build an eight-story apartment building on the site, with shopping on the ground floor.

Enter the city’s historic preservation crowd — which filed an application with the city to make the restaurant a historic landmark. City planning staff gave their tentative approval last month. Today, a city council committee takes up the matter.

The designation would drastically reduce the value of Messina’s property and his ability to live the comfortable retirement he strove so hard to achieve. 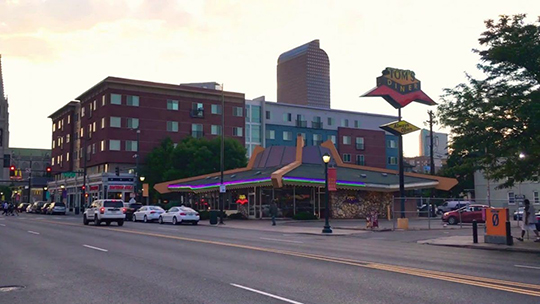 What do the preservationists say? “We met with Tom,” says one Jessica Caouette, “to present him with some creative and viable solutions. We know this is a life-changing opportunity for him, which is why our focus is on a solution that meets his needs and protects the identity and history of the Colfax corridor.”

Yeah, small comfort to Messina. “You plan for something and you think it's yours to do as you wish,” he tells Reason, “and then this pops up.”

“Dave, I really appreciate your comments about the twisted ideals of the Beltway class!” a reader writes after we took note of growing demands to treat “white nationalism” the same way as “Islamic terrorism.”

“It’s terrifying to think of them actually getting something like that through Congress. If it did happen, a lot of good citizens would be thrown in jail just for looking at somebody wrong. Legislation like that can be taken out of context and used in ways that it was not meant to be used.”

The 5: The Patriot Act — allegedly a law aimed at stopping acts of “Islamic terrorism” — is a perfect example of legislation “taken out of context and used in ways that it was not meant to be used.”

Among other things, the law end-ran the Fourth Amendment by authorizing “sneak and peek” search warrants — where you, the suspect, don’t have to be notified of the search until after the fact.

On Twitter this morning, your editor stumbled across a chart of these warrants that looked mighty familiar — because we ran it in The 5 way back in 2011. We reproduce it here verbatim, old-school design and all… 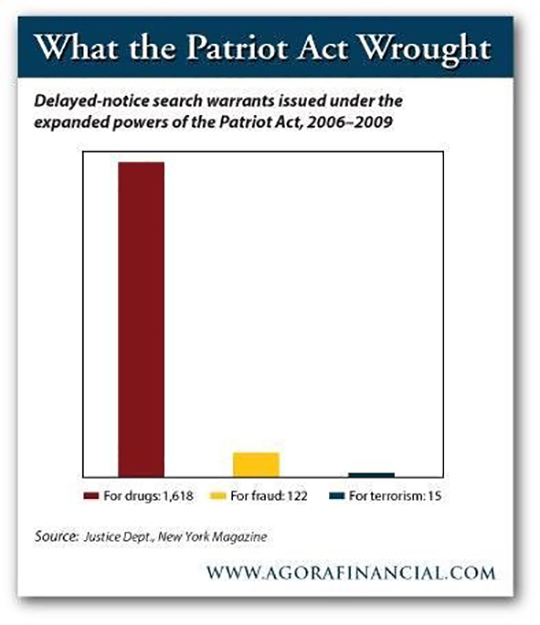 It’s gotten no better since then. In the year ending September 2017, 78% of these warrants were for drug cases. Terrorism accounted for 0.55%.

Meanwhile, we’re still seeing the mentality we noted yesterday afflicting the power elite. This is Obama’s ambassador to Russia, now teaching at Stanford…

Challenged by someone who said exactly what we said yesterday — that government “wars on” terrorism or drugs or whatnot inevitably make matters worse, the professor could only acknowledge, “Fair point.” Sometime today he deleted the tweet altogether.

Not that that will stop his compatriots from plowing ahead…

“You point out that if you don’t mention Kashmir, no one will,” a reader writes on another topic from yesterday.

“I lump this into the general category of what I call ‘selective news,’ which I think is a more accurate term than ‘fake news.’ It’s almost like the MSM has a little morning coffee club that goes over all the current events and first determines which ones to report at all (i.e., which fit their narrative or aren’t too harsh for the sensitive American public).

“This Kashmir story, along with President Xi’s lifetime term, apparently didn’t make the ‘sensitivity’ cut, since they both were pretty important but totally ignored. Then after determining which stories do make the cut, they have to determine the all-important spin with which to present their stories, because no story can ever be neutral anymore.

“There always has to be a good guy and a bad guy, or a good angle and a bad angle, or… whatever is required to get the necessary message conveyed (ideally tying anything bad to destroying the planet, for instance). Finally, time needs to be left for some warm and fuzzy story to let everyone know how ‘feelings oriented’ they are, since feelings, after all, are at the core of everything, not facts.

“I sometimes wonder if the talking heads are part of the charade or just useful idiots, too young to realize that what they are reporting isn’t news at all but carefully packaged propaganda. The word ‘news’ has apparently been redefined over the years, since most people seem to accept that term as being appropriate for the BS being presented under that banner, but it used to be called ‘opinion.’ As stated above, when the latter is presented as the former, it’s nothing but propaganda.”

The 5: We touched on this phenomenon two weeks ago: Unless the media can frame a problem in a way that fuels the tribal partisan loyalties of readers and viewers, it basically doesn’t exist.

So when our own Nomi Prins does a book tour talking about how the Fed’s post-2008 policies have enriched the moneyed classes at the expense of everyone else (i.e., those ultralow interest rates mentioned above), she can’t get traction on cable TV because the topic can’t be framed in a red-versus-blue template.

Which, of course, suits the Fed just fine…

“Please help me save the English language!” implores our final correspondent.

“Yesterday, a reader started off his comments with, ‘Dave, in regards to the political commentary……’ People! There is no ‘s’ used with the word ‘regard’ unless it appears at the end of a letter meaning ‘good wishes.’

“It’s all over the web, in newspapers (sadly, as a former reporter) and in correspondence (especially from semiliterate attorneys).”

The 5: Your objection is formally registered.

I have a bigger objection, honed by decades of editing broadcast news copy for maximum economy of language: Most of the time “in regard to” can be replaced with “about.” One-third of the words and half the syllables!

P.S. In case you missed it earlier today, one of our publishers sent you an important message about the state of our company and how it affects you.

It’s only 90 seconds. And it comes offline at midnight tonight. Click here to view it right now.