Would everybody just shut up about the “nuclear option” already?

China’s devaluation this week — an escalation of the trade war — is reviving talk about Beijing dumping its holdings of U.S. Treasury debt. 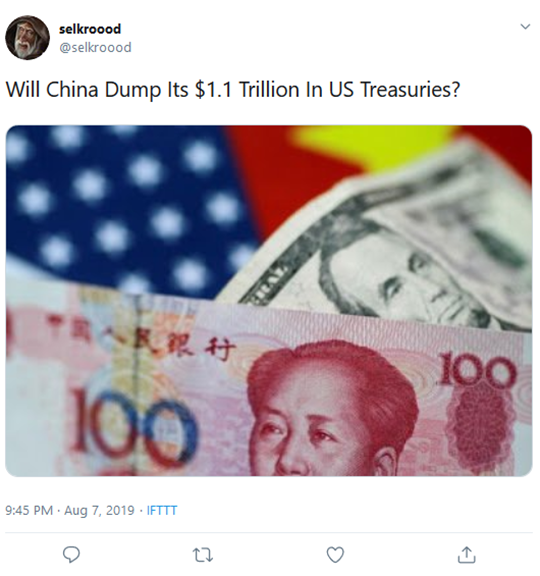 Yes, in theory, Beijing could unload its huge stash of Uncle Sam’s debt. Prices of Treasuries would collapse and yields would soar. Interest rates across the board would skyrocket for American businesses and consumers and the U.S. economy would tank. The “nuclear option,” as it’s come to be known.

But as Jim Rickards has explained in this space before… China would only be cutting off its nose to spite its face.

“They hold so many Treasuries that even small steps in the direction of dumping would devalue what remains on their books,” he says.

Meanwhile, “U.S. banks (perhaps operating on Treasury orders) could easily absorb the Chinese selling to maintain market stability. If selling did become disorderly, the U.S. could freeze the Chinese accounts (which are held in electronic book entry form on systems controlled by the Treasury and the Fed).”

Thus, “China is stuck with what they have.”

It’s true that China’s holdings of Treasuries are now at their lowest level since May 2017. To the extent China is selling Treasuries of late, that’s “because they're desperate for cash to meet obligations and offset capital outflows,” Jim tweeted this morning. “Bad news for China, not the U.S.”

With a lack of new trade war headlines today, the safety trade is in retreat.

Among the developments fueling the risk-on atmosphere: The central banks of three countries in the Asia-Pacific region — India, Thailand and New Zealand — just cut interest rates. In addition, China’s trade numbers delivered an upside surprise. Exports rose 3.3%, compared with forecasts of a 2% drop. And imports fell, but less than expected.

Meanwhile, here’s an interesting chart. Just don’t read too much into it: 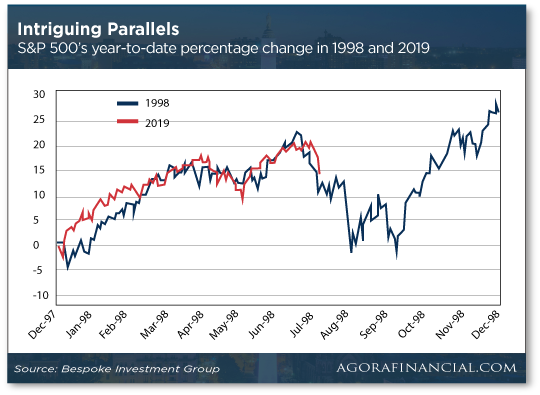 In general, our chart hound Greg Guenthner isn’t keen on this sort of comparison — “analogues,” to use the industry term. “After all,” he tells us, “every situation is unique and history doesn’t ever repeat exactly as you would expect.

“But it is interesting to see how the S&P’s 2019 performance is tracking with 1998. Both are years that take place in a mature or late-cycle bull market. And both instances saw strong bull trends interrupted in late summer.”

In case you’re wondering, Russia defaulted on its government debt in August 1998.

“I’m not betting that the third and fourth quarters will play out just as they did 21 years ago,” says Greg. “But if we do experience a huge drop, I certainly hope stocks storm back in October to end the year at their highs.”

For the moment, the social media stocks are shrugging off the threat of regulation from the Trump administration.

According to Politico, “The White House is circulating drafts of a proposed executive order that would address allegations of anti-conservative bias by social media companies.”

The details are fuzzy, but the website quotes an anonymous White House official about the aim: “If the internet is going to be presented as this egalitarian platform and most of Twitter is liberal cesspools of venom, then at least the president wants some fairness in the system.”

For now the market impact is nil: At last check, Facebook is up more than 1% on the day and so is YouTube parent Alphabet. Twitter is up a hair.

Wait — did the man say “fairness”?

It’s hard to assess the impact of the social media regulations without knowing exactly what they’ll be. We’re more struck this morning by the irony of it all.

A few decades ago, conservatives rightly decried something called the “fairness doctrine.” As a condition of keeping their federal licenses, the owners of radio and TV stations were compelled to provide equal time and balanced viewpoints on political and social issues.

The regulation was so vague that licensees complied with it by skirting controversial issues or, if they couldn’t be skirted, treating them in the most vanilla way possible. It’s why TV news back in the day was painfully predictable and looked the same no matter which channel you turned on.

Just as your editor was getting into the broadcast news biz in 1987, the Reagan FCC did away with the fairness doctrine. Among other effects, that action gave space for the rise of conservative AM talk radio; Rush Limbaugh took his local show national a year later. Once in a while you still hear liberals decry the fairness doctrine’s demise.

Now, though, the shoe’s on the other foot and it’s conservatives who don’t understand the plain language of the First Amendment. Sheesh.

[Before you write in with nasty emails: I’m not exonerating the social media companies here. In fact, right after Alex Jones was “deplatformed” by Facebook and YouTube, I devoted an entire episode of The 5 to their misdeeds. Turns out it was one year ago today. Still worth a read, if I say so myself.]

Revolving-door update: Former Defense Secretary James Mattis is headed back to his old post on the board of the defense contractor General Dynamics.

After a long career as a Marine Corps officer, Mattis first joined GD’s board in 2013. Then he left to become Trump’s Pentagon chief. Now he’s back.

Meanwhile, the new defense secretary, Mark Esper, spent several years at Raytheon and was named by The Hill as one of the most powerful corporate lobbyists in D.C. in 2015 and 2016.

Yes, there are thousands of revolving-door stories between Big Government and Big Business — our favorite is how the law firm Covington & Burling kept a corner office empty for Eric Holder once he was done with his gig as Obama’s attorney general — but the defense sector stands apart in the brazenness of it all.

It’s also uniquely investable. Over the last five years, ITA — the big defense ETF — has doubled while the S&P 500 is up barely 45%. Trump, Obama, Bozo the Clown — the presidency doesn’t matter, the sector is a sure long-term winner. As long as you’re willing to hold your nose…

Look out: Jon Corzine is back in the money management business.

Corzine is a poster child for the corrupt culture of Wall Street and Washington. He turned Goldman Sachs into a too-big-to-fail vampire squid before going on to be a U.S. senator and governor of New Jersey.

Then he returned to finance and destroyed a legendary brokerage called MF Global with an epic act of plunder.

He made a bad bet in the firm’s trading account on European government bonds. To meet the margin calls… he raided customer accounts to the tune of $1.6 billion.

The feds brought no criminal charges and he settled a civil case with customers in 2016 for $132 million. 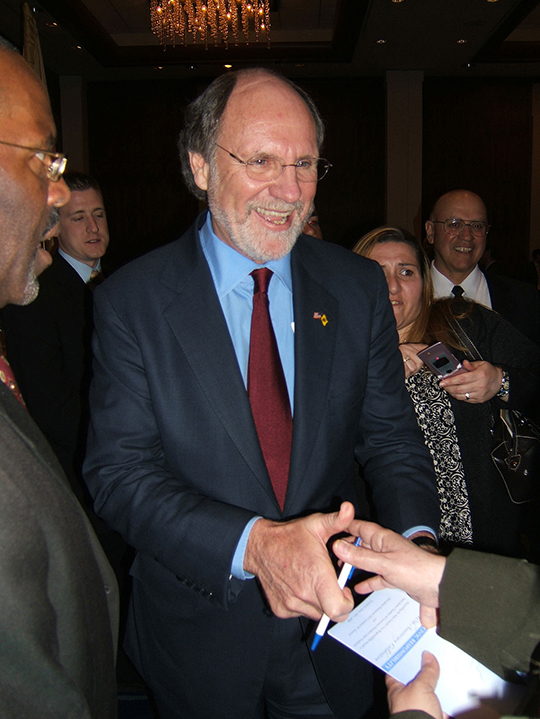 Impunity, thy name is Jon Corzine. [Photo by Flickr user Tony the Misfit]

On Monday, the Securities and Exchange Commission approved Corzine’s application to run a hedge fund.

The approval does come with some limits that aren’t industry standard. Corzine can’t engage in the kind of “proprietary trading” that got MF Global in trouble, and the limits also appear to keep him out of many thinly traded asset classes — perhaps even small-cap stocks.

The SEC decision comes despite a petition from executives and traders with the National Futures Association, urging that Corzine be turned away. Among the people who signed the petition was the hedge fund manager Kyle Bass. “Why on earth,” he asks Bloomberg News rhetorically, “should the SEC allow him to have a license to handle customer money once again?”

[Thanks to the alert reader who brought this item to our attention.]

To the mailbag and an apocalyptic inquiry: “Who is in charge of pulling the trigger in a nuclear war between Pakistan and India?

“Is that a political call? Do politicians have enough balls to make that call nowadays? I feel like they would rather ensure that they stay in power playing these violent games versus ending everything in sight and destroying their area of influence. Thoughts?”

The 5: In India, it likely is a political call. In Pakistan, the political leaders have outsourced the call to battlefield commanders. We’re not sure which is scarier.

From Pakistan’s standpoint, the only thing standing in the way of an Indian invasion at any given moment are its tactical nukes. Thus, front-line Pakistani commanders have the authority to use those nukes.

Meanwhile, “India has a ‘no first use’ policy, but with so many caveats that it is essentially meaningless,” writes Conn Hallinan from Foreign Policy in Focus. “In brief, it wouldn’t take much to ignite a nuclear war between them.”

Indian Prime Minister Narendra Modi rose through the ranks of an ultra-nationalist paramilitary organization called the RSS — which formed during the 1930s in parallel with the German Nazis and Italian fascists. At the dawn of World War II in 1939, its leader declared, “We Hindus are at war at once with the Muslims.”

Modi was governor of Gujarat state in 2002 when Hindus carried out a pogrom of Muslims, murdering thousands. Modi’s police basically looked the other way.

It is a long-standing position of the RSS that Article 370 — the document assuring Kashmir’s autonomy within India — be repealed. Which Modi did on Monday.

Yes, a nuclear strike on Pakistan would have devastating fallout over India. But at least one observer has pointed out that the Hindu belief in reincarnation might make hardcore Hindu nationalists less hesitant to order a strike. A harsh assessment, but I guess there’s a certain logic to it.

With gold at a six-year high, what better time to rob Mexico’s national mint and make off with $2.5 million in gold coins?

That’s what the government confirmed Tuesday. Two people broke in… one brandished a firearm (hey, doesn’t Mexico have strict gun control? Oh well)… and threw a security guard to the ground.

They made their way to an open vault and loaded up a backpack with 1,567 gold centennials — each worth a little over $1,900.

Investigators figure it was probably an inside job. Meanwhile on social media, folks are saying the robbery bears an awful lot of similarities to the plot of a popular Spanish Netflix series, whose name translates to English as Money Heist.

Hmmm… Collectors might want to steer clear of Mexican gold centennials for a while. Just sayin’.

P.S. Tomorrow’s topic: “The Social Security Compromise of 2019.” Hope you can join us…